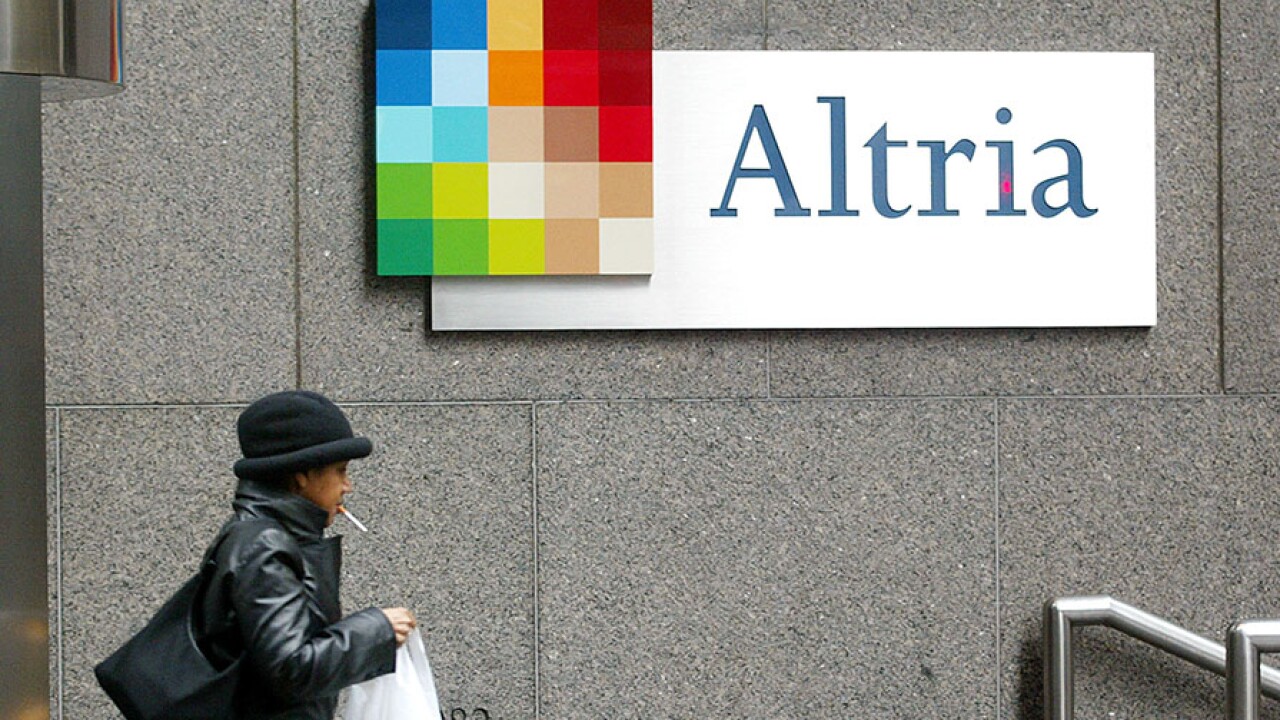 Fresh off a $1.8 billion investment in Canadian cannabis company Cronos Group (CRON), Altria on Thursday purchased a 35% stake in e-cigarette maker Juul, worth $12.8 billion. The Wall Street Journal was the first to report that Altria (MO) was considering an investment.

The investment is the largest in Altria's history, and it values Juul at $38 billion dollars. It pairs a company that controls half of the American tobacco market with startup Juul — which sells more than 70% of the cartridge-based e-cigarettes in the United States.

The marriage allows Altria to broaden its customer base. Altria is a U.S.-only business, spinning off from Philip Morris International in 2008. Juul sells its e-cigarettes in Canada, Israel, Russia and the United Kingdom, in addition to the United States.

It could give Altria, a leader in a US cigarette business in slow decline, a window into the rapidly growing market of e-cigarettes. The deal could give Juul access to Altria's massive distribution network and top-shelf space at stores. And Altria will advertise Juul products in cigarette pack inserts and mailings, the company announced.

Ironically, Juul has marketed its products for people who want a smoke-free source of nicotine to help them quit cigarettes.

"We can't restate this enough," said Juul CEO Kevin Burns in a July letter to customers. "As an independent company that is not big tobacco, we are driven by our mission and commitment to adult smokers."

Burns acknowledged the irony of Altria's investment in a statement Thursday, calling its new Marlboro-making partner "unlikely -- and seemingly counterintuitive."

"We understand the controversy and skepticism that comes with an affiliation and partnership with the largest tobacco company in the U.S.. We were skeptical as well," Burns said. "But over the course of the last several months we were convinced by actions, not words, that in fact this partnership could help accelerate our success switching adult smokers."

"We are taking significant action to prepare for a future where adult smokers overwhelmingly choose non-combustible products over cigarettes," Altria said in a statement. "We have long said that providing adult smokers with superior, satisfying products with the potential to reduce harm is the best way to achieve tobacco harm reduction."

The deal has alarmed anti-tobacco advocates, who worry that the companies' pooled political power could squash regulation efforts. Many have also criticized how both companies have appealed to youth, gaining potential lifelong customers.

Matthew L. Myers, president of the Campaign for Tobacco-Free Kids, said in a statement that the deal "is a truly alarming development for public health and brings together the two companies that have been the most successful in marketing their highly addictive products to kids."

Myers called on the Food and Drug Administration for urgent regulation "to stop tobacco companies from reversing decades of progress and addicting another generation of kids."

Altria's investment is a risky one.

Juul has come under intense regulatory scrutiny after teenagers became addicted to its products.

Federal law prohibits the sale of e-cigarettes to people under the age of 18, yet one in five high school students uses e-cigarettes, according to the surgeon general. Teen e-cigarette usage is soaring: The percentage of high-school-age children who say they used e-cigarettes in the past 30 days rose by more than 75% between 2017 and 2018, according to the National Youth Tobacco Survey.

In September, the FDA started a campaign to prevent kids from using e-cigarettes. It called teen use of e-cigarettes "an epidemic," claiming that nicotine use is hazardous to young adults' health. The FDA conducted a surprise inspection of Juul's corporate headquarters in San Francisco a month later, seizing thousands of documents, many of which relate to the company's sales and marketing practices.

The FDA was expected to ban e-cigarettes last month, but it instead pushed for e-cigarettes to be sold only in parts of stores that are closed-off to teenagers.

Altria also faces regulation of some of its most popular products. The FDA last month sought a ban of mentholated cigarettes.

Altria also wants to bring its IQOS tobacco-heating device to market, but it has not yet received government approval. The company has not shown that IQOS is a safer alternative to cigarettes, the FDA said earlier this year.

The company's investment in Cronos, much smaller than its reported interest in Juul, is potentially its safest bet. Marijuana has gained legal status in Canada and a growing number of American states — although it remains a controlled substance on the federal level.