SAN DIEGO (KGTV) -- A 13-year old girl, waiting for her mother to pick her up in Grant Hill, was attacked by a knife-wielding man Friday afternoon.

San Diego Police are now using surveillance videos in their search for the suspect, who yanked a gold necklace from the teen's neck before making his getaway near the intersection of 26th and K Street.

The girl wasn't hurt, but parents like Elizabeth Alvarado, whose twin 12-year-old daughters walk by that same spot each day, are hoping he doesn't strike again.

Alvarado saw surveillance video after the principal of her daughters' school sent parents a link, suggesting they talk to their kids about staying safe.

Andy Trakas of Albert Einstein Charter Middle School said the girl who was attacked wasn't one of his students, but there are several other schools in the neighborhood.

"We decided to be very, very proactive because the safety of our students," said Trakas, adding that all children in the community are a concern.

Trakas suggested parents talk to their kids about being aware of their surroundings and the importance of staying in groups, not alone, after school. San Diego Police stepped up patrols in Grant Hill after school and are following every lead to catch the thief.

The suspect is describe as a black male five feet, eight inches tall with a stocky build who was wearing a plain black hooded sweatshirt, a black cloth covering the lower portion of his face and dark-colored pants.

Authorities say the suspect was driving a white Hyundai Elantra  (pictured below.) 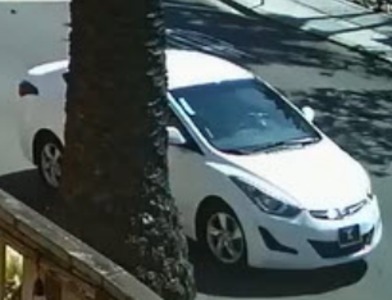