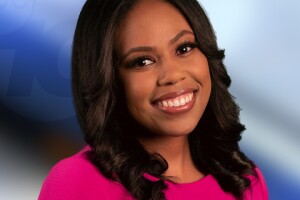 Natay Holmes is a native of San Diego, California, where at an early age she discovered a love for journalism and being in front of the camera. At age 5, Natay would use her dad’s video camera during family gatherings, and report the latest “news” at the Holmes residence.

Natay attended Monte Vista High School in Spring Valley. She then graduated from San Diego State University in May 2012, with a Bachelor of Arts Degree in Interdisciplinary Studies in Three Departments: Journalism and Media Studies; Television, Film, and New Media; and Communications.

During her studies at SDSU, Natay also attended classes at San Diego City College. She gained experience as a multi-media journalist; writing, editing and producing her own stories for City College’s “Newscene” broadcast.

Before transitioning in front of the camera, Natay worked for a local news station in San Diego as a Morning News Producer. In 2015, Natay moved to Jackson, MS where she was the Morning News Reporter for WJTV 12. During her time at WJTV, Natay was recognized for her work. She placed third for “Best Feature Story” with the Mississippi & Louisiana Associated Press Broadcasters Awards in 2016. The following year, she was honored as the “2017 Reporter of the Year.”

Natay is excited to be back home in San Diego as a Reporter with KGTV 10News, a station she watched growing up.