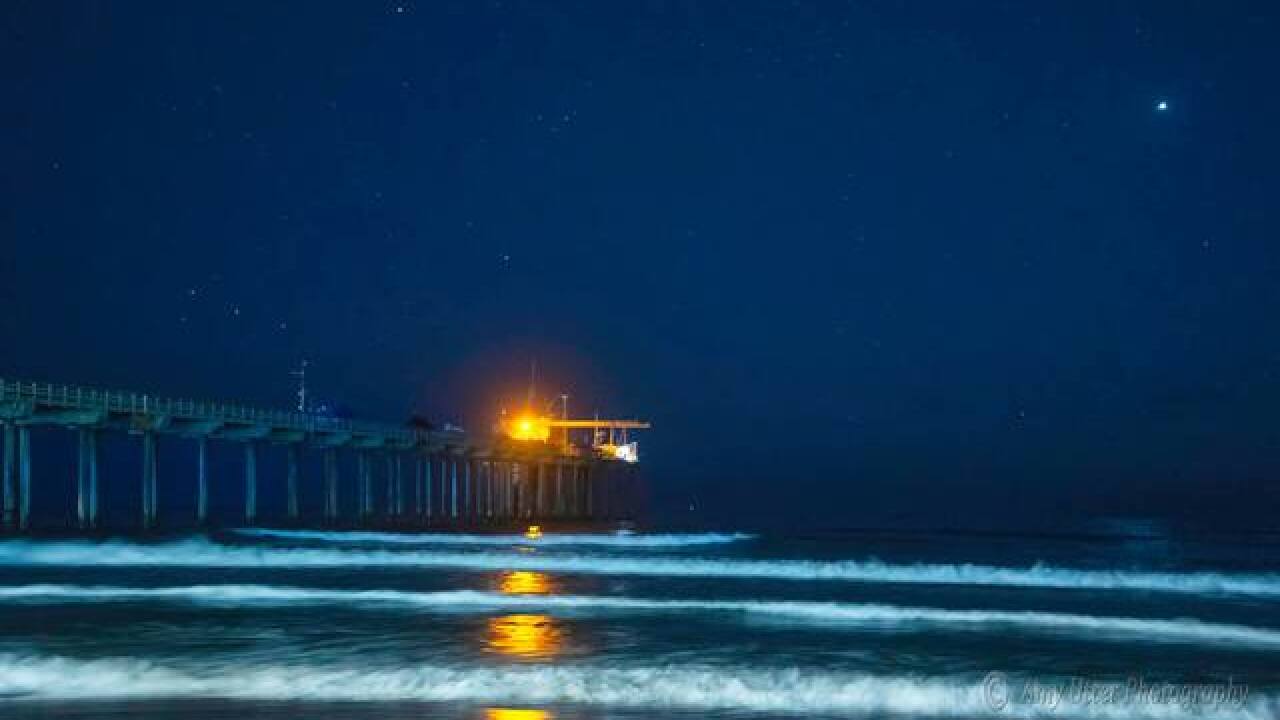 Copyright 2018 Scripps Media, Inc. All rights reserved. This material may not be published, broadcast, rewritten, or redistributed.
Credit: Amy Utter 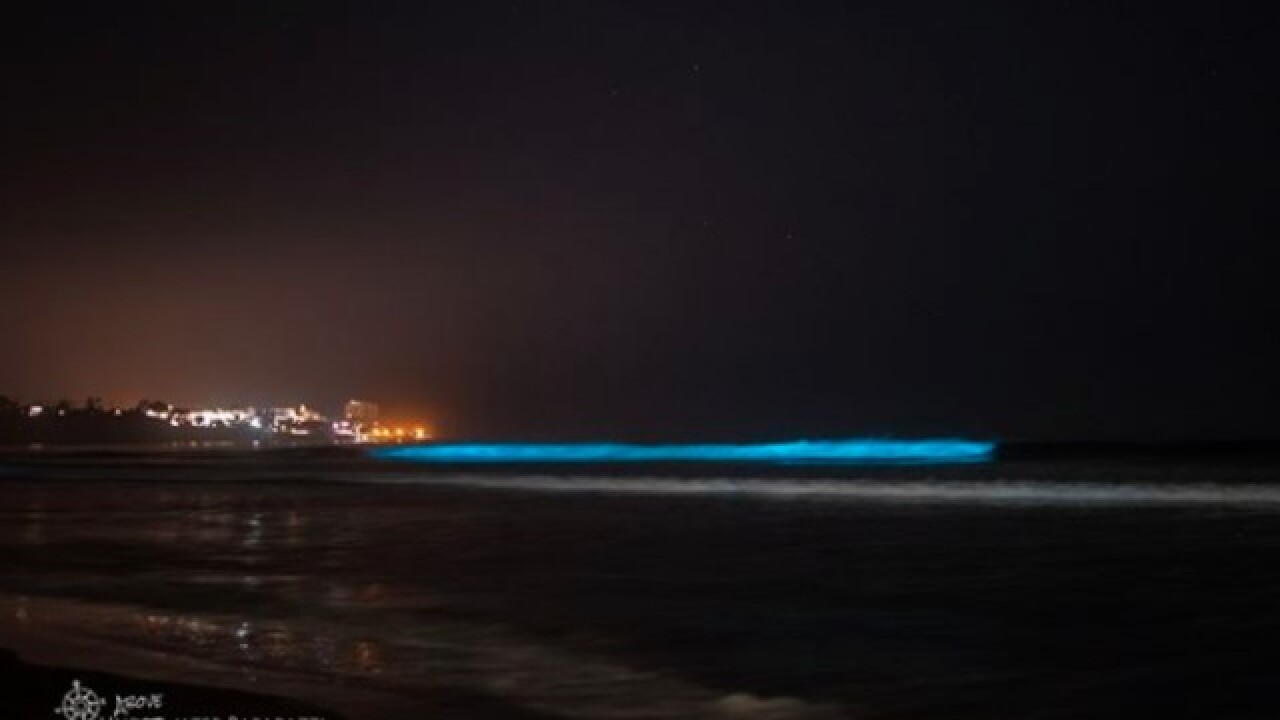 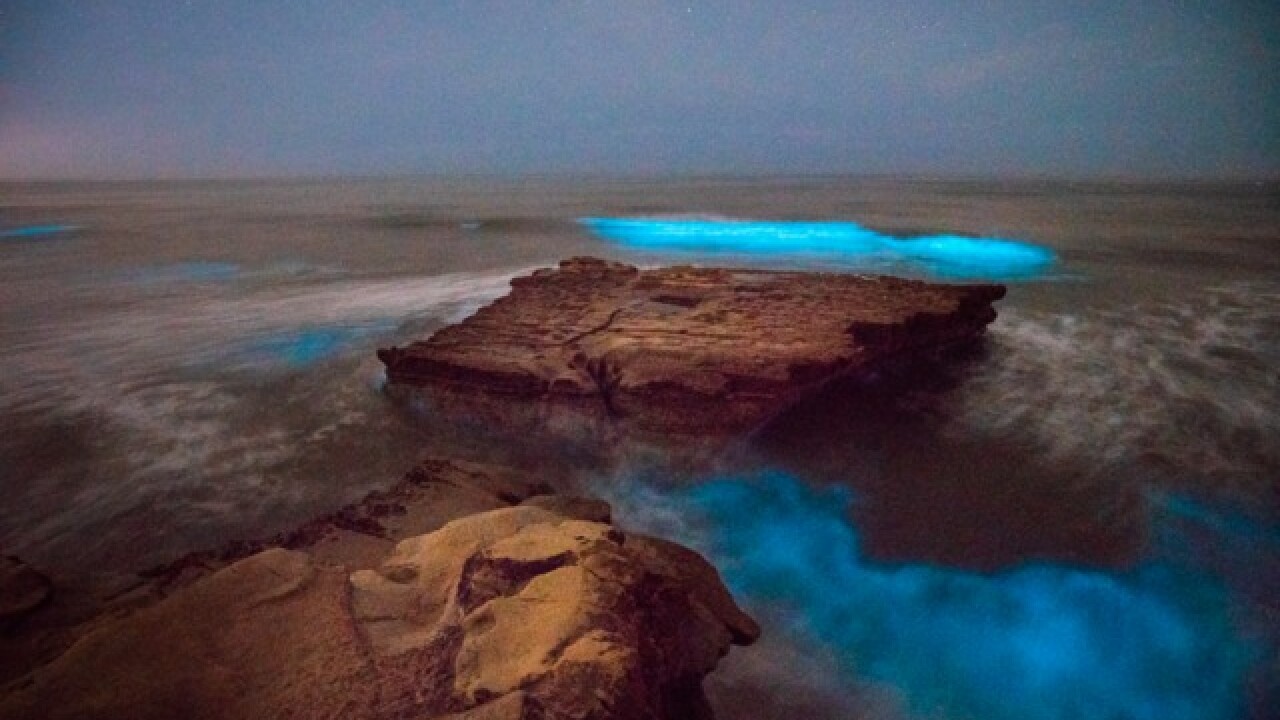 SAN DIEGO (KGTV) - San Diego photographers are taking advantage of the serene and luminous glow of the surf this week.

Eerie neon blue waves have been seen against San Diego's shore this week, creating some rare photo opportunities for locals. The phenomenon is created when a red tide, which is algae bloom filled with phytoplankton called "dinoflagellates," rolls off waves onto or near the shoreline.

The organisms react with a bioluminescent chemical reaction when jostled as a way to warn predators, to lure prey, or communicate within their species. The blue glow can be created by a simple step in the water or crash of a wave.

The current red tide is being caused by massive numbers of dinoflagellates including "Ceratium falcatiforme" and "Lingulodinium polyedra," according to the Scripps Institution of Oceanography at UC San Diego.

Researchers do not know how long this current red tide will last or "the full spatial range of the bloom." In the past, blooms have lasted anywhere from a week to a month or more.

San Diego's last red tide event in September 2013 lasted one week, while the previous one in October 2011 lasted a month, according to researchers. Previous ones have lasted even longer.

Monday's event was captured from La Jolla to Encinitas. Scripps recommends viewing the marine event from a dark beach at least two hours after sunset, though visibility is not guaranteed.

In some areas, a red tide can be toxic to local marine life. In California, the majority are not caused by species that produce toxins, such as domoic acid, according to researchers. However, it's still best to be cautious around the bloom.

Red tides are unpredictable events and do not always give off bioluminescence, Scripps said.

The red coloration is due to the high number of organisms in the water. During the day, organisms will swim to the surface to soak in sunlight. Each cell contains a little sunscreen that gives off the color, according to Scripps.

When these organisms gather at the surface for sunlight, they can create an especially intense red.

Researchers say a combination of physical, chemical, and biological factors are the driving forces behind allowing red tides to form.