A local woman met her birth mom, Kathleen Buchanan, after months of talking on the phone. The connection started after she got the results of her DNA test. Story: https://wfts.tv/2LudBAv

TAMPA, Fla — Amy Bottomley was raised in the suburbs of Chicago by two parents who loved her very much — a little girl who grew up and moved with her husband and son to Tampa.

She says there’s always been a piece of her heart missing — and on Thursday, in front of Gate C inside Tampa International Airport, she was ready to find that missing piece.

Bottomley had spent months talking on the phone with her birth mother, Kathleen Buchanan. They had connected after Bottomley got the results of a DNA test.

"I am feeling a mix of emotions right now,” Bottomley said as she sat in the seat and waited for her birth mom’s plane to land. “It’s going to be interesting.”

Her hands were shaking, her heart was racing. She got a text that her birth mom's plane had landed.

She’s been waiting for this moment, "My whole life, my entire life, 42 years.”

Bottomley's son was there to support her, telling her that he's got her back.

“You’ll be right behind me?” she asked, just before the doors to the tram opened.

Then, Bottomley saw her birth mom flash a giant smile.

Kathleen Buchanan has been waiting too. She always hoped Amy would reach out.

Buchanan gave her baby daughter up for adoption on Valentine's Day of 1977. She was only 18, and felt like she couldn’t give her daughter the life she deserved.

"One of the things that you have to accept is that it could be forever, you don’t really know,” Buchanan said.

But Buchanan never gave up hope, and even sent a letter days after the adoption to her daughter's new family. She penned the words on two pieces of paper with hopes that Amy would read it one day and understand why she did what she did.

"It was something that I have looked at and read 1 million times over because it was a piece of her,” Bottomley said.

Buchanan believes everything happened at the right time. Her husband passed away recently and she’s has felt lonely. Buchanan's adoptive mother gave her a DNA kit for Christmas because she has also kept hope that one day she could find her birth mother.

"I’ve always been told by my mom who raised me that I’m a strong-willed woman, independent woman. And I am. I always thought I got that from my birth mom,” Bottomley said. 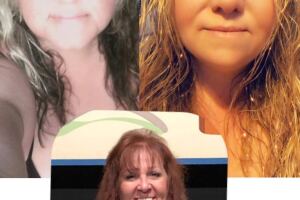 "There’s a lot of commonality there and I think this is proof that it’s nature over nurture. That the DNA no matter when you split people apart, the DNA is what it is,” Buchanan said.

Both Bottomley and Buchanan both agree Mothers Day now has a much deeper meaning. They are excited to get to know each other.

“To my beautiful daughter,

By the time you are old enough to read this I am sure you will also be old enough to understand the reasons behind this.
I gave you up to the good people who are now your parents, not because I didn’t want you but because what I wanted for you I could never have given you.
When I saw you after you were born you were so beautiful and that’s the way I wanted you to stay – physically and emotionally.
I hope at reading this you love me as much as I love you as I write it.
Even as our lives go on, if the situation arises that I have other children don’t ever feel that I could forget you.
Please be good to yourself, to your parents and to me in your thoughts because my decision was the best road to happiness for us all.
I love you,
Your mother.”