A Parker mom was in sticker shock when she found out her Uber ride from Pepsi Center back to Parker cost $443. 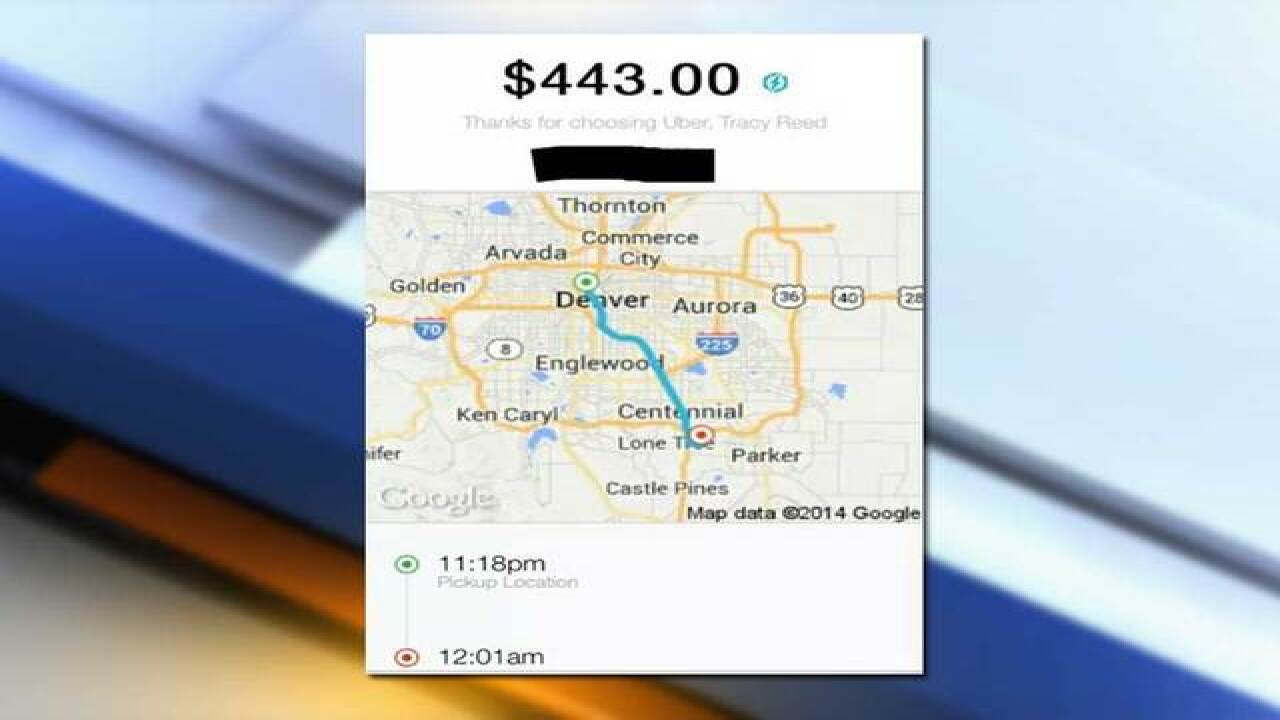 A Colorado mom was in sticker shock when she found out her Uber ride from Pepsi Center back to Parker cost $443.

Tracy Reed used Uber -- the transportation service that allows someone to request a car in the area via an app -- to get five people from her Parker home to the Elton John concert at Pepsi Center on Saturday night.

After the concert, she used Uber to get to a Parker bar near Lincoln and I-25. That 19-mile ride cost a bit more than her first ride.

According to Reed's emailed receipt, she used Uber during "surge pricing." Uber's prices are increased during periods of low supply and high demand.

"I would never have accepted a ride had I known that," said Reed.

"At no point can anyone ever request a surge ride without being notified about it beforehand," said Uber Denver General Manager Will McCollum.

When 7NEWS met with McCollum it was during Monday evening's rush hour. He opened the Uber app, which showed 1.25 surge pricing in effect. Meaning, any ride requested at that time would be 1.25 times the normal rate.

Users have the choice to approve the pricing and move to the next screen or be alerted when surge pricing comes to an end.

McCollum said if the surge pricing is greater than two times the normal rate, like in Reed's case, there is a second screen that must receive user approval.

"If it were '2.5,' let's say, then they actually have to dial in '2.5.' That informs the customer and it ensures that they understand what they're entering into," said McCollum.

"We had had some drinks, but again, I remember everything and I know I would have remembered pushing something, not once, but twice, to verify the surcharge," said Reed.

"Did you type in '4.25,' accepting those terms?" asked 7NEWS reporter Marshall Zelinger.

"I did not. I think I would have remembered that, especially doing that twice," said Reed.

"The next morning, I received an email from Uber as a receipt," said Reed.

Reed showed 7NEWS an email receipt that was time-stamped at 5:59 a.m.

She also used Uber to get home from the Parker bar. That ride cost $32.

According to McCollum, when Reed opened the app to request that final ride, she should have seen a screen that showed her the previous ride's price and a prompt to rate her previous driver.

"I've never used Uber before. This was my first time and my last time," said Reed. "I would have gotten us a stretch limousine all night long for less than this."

Uber contacted Reed's husband on Monday afternoon and agreed to credit back 25 percent of the fare, equaling $110.

"Which brought the fare down to only $330 for 19 miles instead of $443, and I just don't think that's fair still," said Reed.  "I'm not discounting the fact that they provided a service for us. They were at the Pepsi Center very quick in a very nice, clean vehicle. Even $330 for 19 miles is way too much."