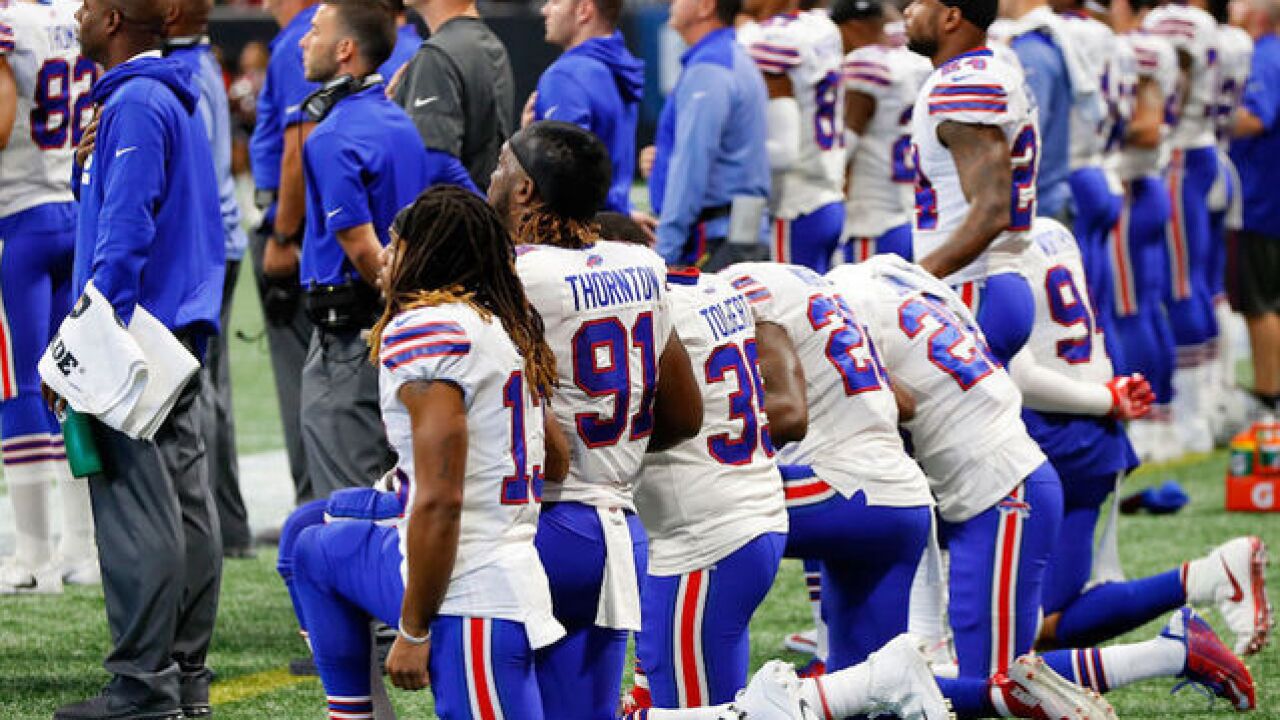 Image copyright 2017 Getty Images. All rights reserved. This material may not be published, broadcast, rewritten, or redistributed.
Kevin C. Cox
<p>Buffalo Bills players kneel during the national anthem prior to the first half against the Atlanta Falcons at Mercedes-Benz Stadium on October 1, 2017 in Atlanta, Georgia. </p>

NFL players must stand during the National Anthem this season, team owners decided Wednesday, a reaction to fierce backlash against some who took a knee in symbolic opposition to the systemic oppression of people of color, including by police.

NFL Commissioner Roger Goodell said during a news conference at the meeting in Atlanta that teams whose players and personnel do not stand and show respect for the flag and the anthem will be fined by the league.

Each team may develop its own work rules regarding players or personnel who do not comply with the policy, which could include fines. The new policy does give players the option to remain in the locker room during the playing of the anthem if they do not wish to comply.

With this change, the NFL's game operations manual will be revised to remove the requirement that all players be on the field for the anthem. Previously, there had been no rule that prevented players from protesting.

"We want people to be respectful to the National Anthem," Goodell said. "We want people to stand, that's all personnel, and make sure that they treat this moment in a respectful fashion that's something I think we owe. We've been very sensitive in making sure that we give players choices, but we do believe that that moment is an important moment and one that we are going to focus on."

The move by owners stems from the silent protests that began in 2016, when then-San Francisco 49ers quarterback Colin Kaepernick kneeled during the anthem to draw attention to injustice.

It also brought the wrath of President Donald Trump, who in 2017 said players' kneeling showed "total disrespect for our great country."

Goodell said that the vote was unanimous. However, 49ers CEO Jed York said he abstained. He wouldn't confirm whether other teams had as well, saying he wouldn't speak for anyone else.

"In terms of allowing teams to enforce their own workplace policies, I think that gives teams the comfort that you can determine what you want in your workplace," York said.

York said he abstained because he wanted to make sure the 49ers organization focused on the progress aspect, not focus on the the protests. He added that the 49ers wanted to take a broader approach and will close concession sales during the National Anthem.

"I don't think we should profit during the National Anthem if we're going to ask people to be respectful," he said.

The NFL Players Association, which was not included in the talks with owners, said the union will review the new policy "and challenge any aspect of it that is inconsistent with the collective bargaining agreement." Owners discussed the topic for two hours on Tuesday and one hour Wednesday, Cleveland Browns owner Jimmy Haslam said.

"The vote by NFL club CEOs today contradicts the statements made to our player leadership by Commissioner Roger Goodell and the Chairman of the NFL's Management Council John Mara about the principles, values and patriotism of our League," the association said in a statement.

In recent months, the league has worked toward a reported $90 million social justice partnership with the Players Coalition, using the NFL's platform to highlight players' efforts to curb injustice and to use political connections to push for legislative change.

The conversations in Atlanta came as two free-agent players, Kaepernick and Eric Reid, have filed separate grievances against the league, citing collusion in denying them jobs. Kaepernick and Reid both kneeled during the National Anthem when they were 49ers teammates, and Reid continued his protest last season. Kaepernick has been a free agent since March 2017.