Hurricane Florence, already a monster, is due to strengthen as 1 million people are told to flee 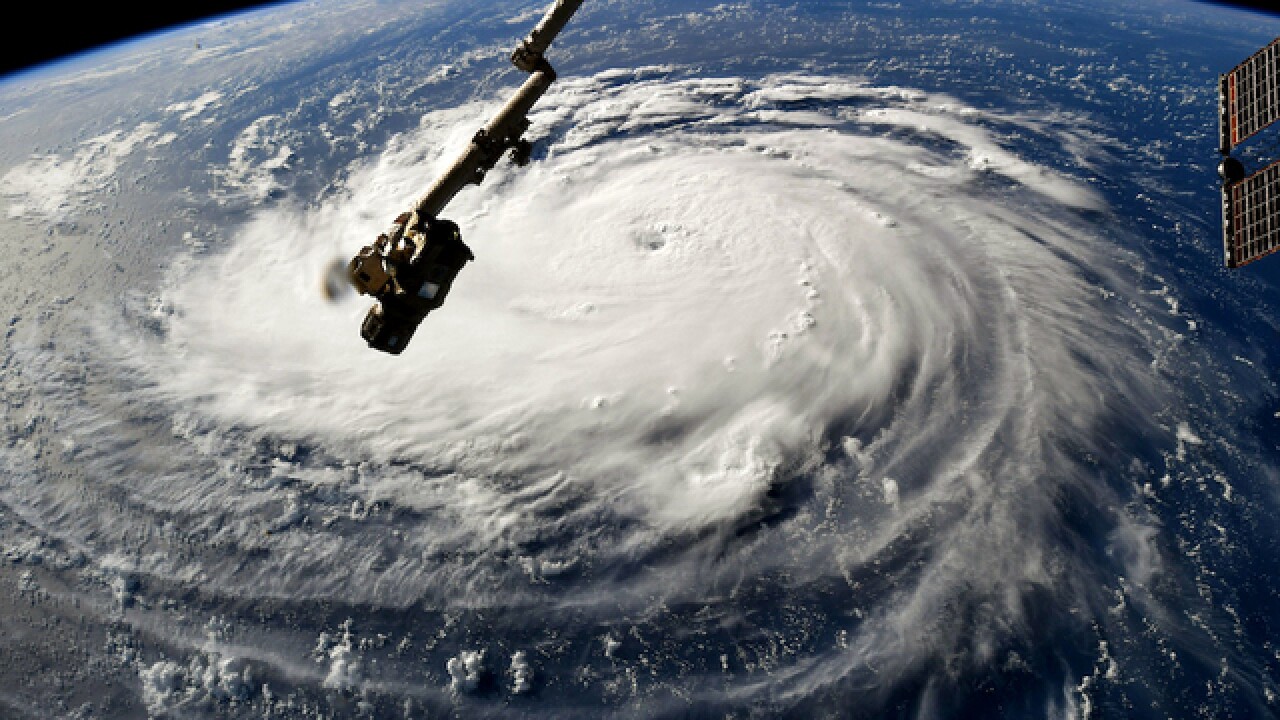 Image copyright 2018 Getty Images. All rights reserved. This material may not be published, broadcast, rewritten, or redistributed.
NASA
<p>In this NASA handout image taken by Astronaut Ricky Arnold, Hurricane Florence gains strength in the Atlantic Ocean as it moves west, seen from the International Space Station on September 10, 2018. Weather predictions say the storm will likely hit the U.S. East Coast as early as Thursday, September 13 bringing massive winds and rain.</p>

The southern East Coast of the United States is bracing for the arrival of Hurricane Florence, as the storm -- already packing winds as strong as 130 mph -- is expected to near Category 5 strength before it strikes overnight Thursday.

More than 1 million people face mandatory evacuation orders in coastal areas of Virginia, North Carolina and South Carolina as one of the strongest hurricanes to aim for the eastern seaboard in decades nears shore.

Tropical-storm-force winds are due to reach the coasts of North and South Carolina late Wednesday night, and hurricane-force winds may be felt around noon Thursday, ahead of a landfall likely Thursday night, CNN meteorologist Chad Meyers said. Hurricane and storm surge watches are in effect in those states, the National Hurricane Center said.

The Category 4 hurricane's center weakened slightly Tuesday morning, but the storm should get stronger, Myers said.

"We do expect (the storm's) eye to get its act together again later today and become that almost-Category 5 storm at 150 to 155 mph," Myers said Tuesday morning.

• As of 8 a.m. ET Tuesday, Florence's center had maximum sustained winds of 130 mph and was about 950 miles east-southeast of Cape Fear, North Carolina.

• Florence is expected to restrengthen Tuesday and "be an extremely dangerous major hurricane through Thursday night," the NHC said.

• Among the storm's threats later this week: Life-threatening storm surges -- up to 12 feet -- along the coasts and up to 30 inches of rain over parts of the Carolinas and Virginia through Saturday.

• "As the storm system lingers through the weekend, there will be heavy rain and flooding throughout the Mid-Atlantic region, with the biggest flood threat in the Carolinas," CNN meteorologist Michael Guy said.

• Mandatory evacuations have been ordered for the entire South Carolina coastline, effective at noon Tuesday, and for parts of coastal North Carolina and Virginia.

• Though not every coastal area in North Carolina was under mandatory evacuation Tuesday morning, "I believe that people should be evacuating the coast of North Carolina," Federal Emergency Management Agency Administrator Brock Long told CNN's "New Day."

• The watches extend from Edisto Beach, South Carolina northward to the North Carolina-Virginia border, including the Pamlico and Albemarle Sounds. Those areas are at risk for hurricane conditions and "life-threatening inundation from rising water moving inland from the coastline" during the next 48 hours, the NHC said.

Residents prepare to flee and hunker down

Residents along the coast boarded up their homes, formed long lines at gas stations and emptied the shelves of hardware stores and supermarkets Monday as they prepared for Florence's arrival.

Crystal Kirwan didn't think she had much choice as she got her family ready to leave their home in Moyock, North Carolina. She and her husband planned to make the 4.5-hour drive with their children to family in Dover, Delaware, as soon as he was cleared from military duty.

"Probably not too much better, but most likely safer than here," she said of the destination.

Grocery stores began selling out of water, milk and bread, and supply stores were struggling to stock batteries, plywood and generators as early as Sunday.

Ryan Fonville visited three hardware stores in Wilmington Monday and found they were running out of supplies.

"I gathered my supplies this weekend, sharing for local community groups so people don't waste gas. The gas pumps are running out as well," Fonville told CNN.

Since noon Sunday, a Lowe's in Lumberton, North Carolina, has been sold out of generators, store manager Mackie Singletary said.

In Charleston, South Carolina, the Coburg Dairy Cow landmark was removed Monday for safekeeping from its perch atop a sign on Highway 17, CNN affiliate WCIV reported.

Storm is expected to strengthen

"Everything that you've been hearing about this storm in terms of its severity is all true," Henning said Tuesday morning. "There's nothing to prevent this storm from continuing to intensify."

The storm intensified rapidly earlier in the week: It became a hurricane over the Atlantic on Sunday, and by Monday morning, it had grown to a Category 3 storm. About an hour after the Category 3 upgrade, it was reclassified as Category 4.

One year after major storms ravaged the Gulf Coast and Puerto Rico, officials warned those in Florence's path not to underestimate the threat the storm poses.

States of emergency were declared in the Carolinas, Virginia and Maryland, where some coastal areas are still recovering from summer storms.

"We are hoping for the best and preparing for the worst," Maryland Gov. Larry Hogan said, noting that Florence could cause catastrophic flooding in his state.

"North Carolina is taking Hurricane Florence seriously, and you should, too," Cooper said. "Action today can avoid losses due to Florence."

In South Carolina, mandatory evacuation orders take effect Tuesday at noon in eight counties along the state's 187-mile coastline. Starting then, traffic in all lanes along parts of Interstate 26 and Route 501 will head away from the coast, South Carolina Gov. Henry McMaster said.

State government offices, including schools and medical facilities, will be closed in 26 counties, McMaster said. He estimated that about 1 million people, order, including residents and visitors, will be affected by the order.

"This is a real hurricane we have coming," McMaster said Monday. "We don't want to risk one South Carolina life."

In Virginia, mandatory evacuations would begin at 8 a.m. Tuesday for about 245,000 residents in a portion of Hampton Roads and the Eastern Shore area, Gov. Ralph Northam said Monday.

"Everyone in Virginia needs to prepare," he said. "This is a serious storm, and it's going to affect the entire state of Virginia."

National Guard soldiers are being mobilized in the affected states. President Donald Trump declared an emergency in North Carolina, allowing it to access federal funds.