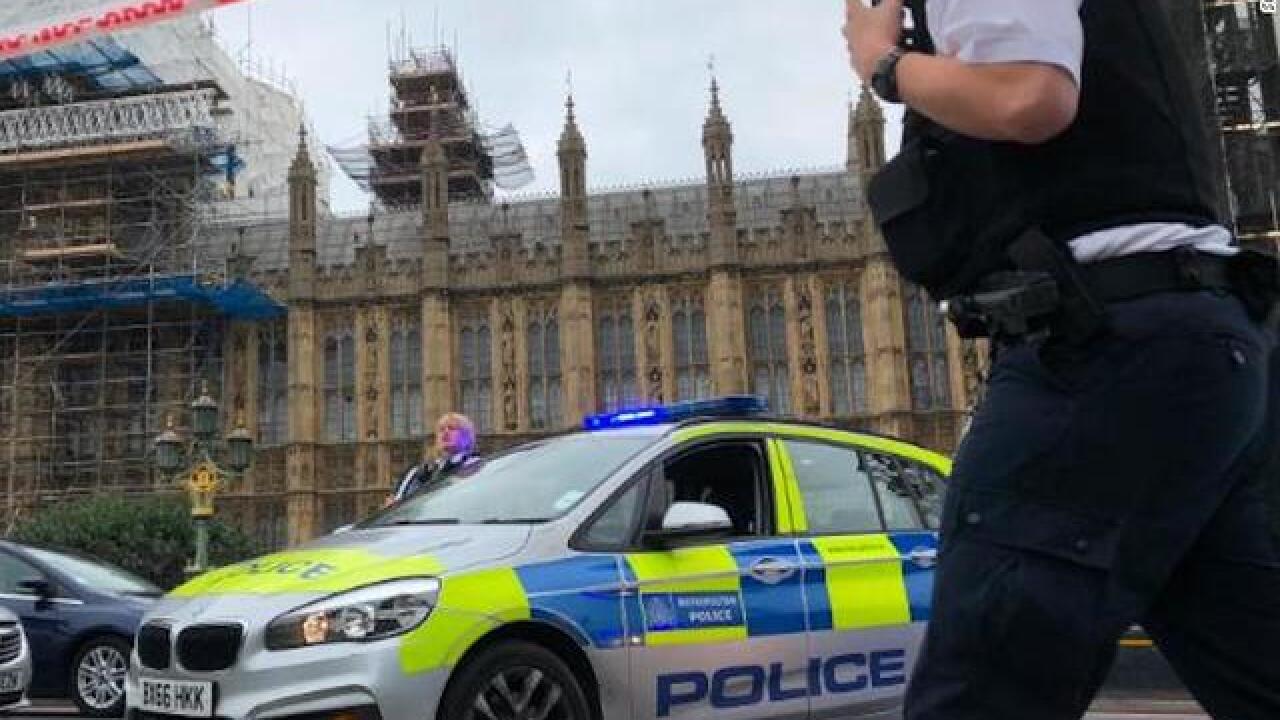 A car crashed into security barriers outside the UK's Houses of Parliament during rush hour Tuesday morning, injuring several people in what police are treating as a terrorist incident.

The man's car collided with several cyclists and pedestrians before crashing into the barrier shortly after 7:30 a.m., police said.

The driver, a man in his late 20s, has been arrested on suspicion of terrorist offenses and remains in custody in a south London police station.

It appears to have been a deliberate act on an iconic London building, and as such, was being treated as a terrorist incident, said Metropolitan Police Assistant Commissioner Neil Basu during a news briefing later Tuesday.

Police were still working on formally identifying the man, who is "not cooperating," said Basu, adding that the driver was not thought to have been known to MI5 or counter-terrorism police.

There was not believed to be a further danger to Londoners or the wider UK related to the morning's crash, Basu said.

"Another terrorist attack in London...These animals are crazy and must be dealt with through toughness and strength!" he tweeted.

Of the victims, one man has been discharged from the hospital, another woman is still being treated for non-serious injuries and a third person was treated at scene.

The driver was alone in the car and no weapons were recovered at the scene.

Eyewitness Ewelina U. Ochab said she saw the incident take place from the other side of the pavement.

"I heard some noise, and someone screamed. I turned around and I saw a silver car driving from the crossing -- very fast and close to the railings, maybe even on the pavement," Ochab said.

"The car drove at speed... There was a loud bang from the collision and a bit of smoke. The driver did not get out. The guards started screaming to people to move away. One elderly man rushed me to hide behind a monument, just in case."

Following the incident, the nearby Westminster Underground station was closed, according to Transport for London, while roads nearby were cordoned off.

The area is popular with tourists visiting the Houses of Parliament and Westminster Abbey.

Cordons are likely to be in place for some time and Londoners have been urged to avoid the area, police said.

Parliament is currently in summer recess, meaning many of the usual staff were not present.

Jackie Laidley from London, who works as a manager in the Cabinet office, told CNN she couldn't reach her workplace because of police cordons.

"We're kind of stuck waiting to hear from our bosses what to do," she said.

"We've had attacks over the years... You just thank your stars that you're really not caught up in it. When you live in London in a big city anything like this can happen," she added.

Earlier in the week they had heard about a shooting in Manchester, northern England, but said that despite the incidents they had no plans to cut short their trip to the UK.

"There is some fear, but it's a fear to overcome," Siti Nadhirah told CNN." We have to be brave to see new things in the world."

Security measures in the area were reinforced after the Westminster Bridge attack in March 2017.

Four people were killed in that incident when a 52-year-old British man, Khalid Masood, rammed a rental car onto the sidewalk on Westminster Bridge. Masood then stabbed an unarmed police officer.