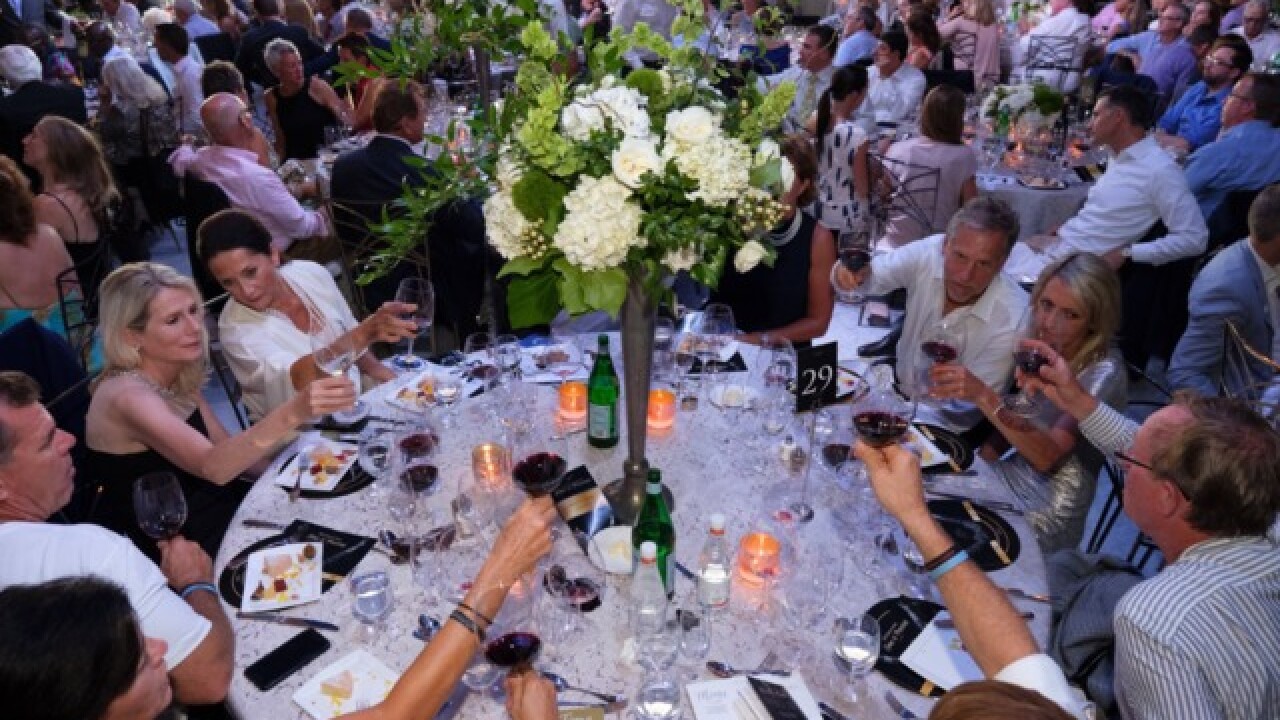 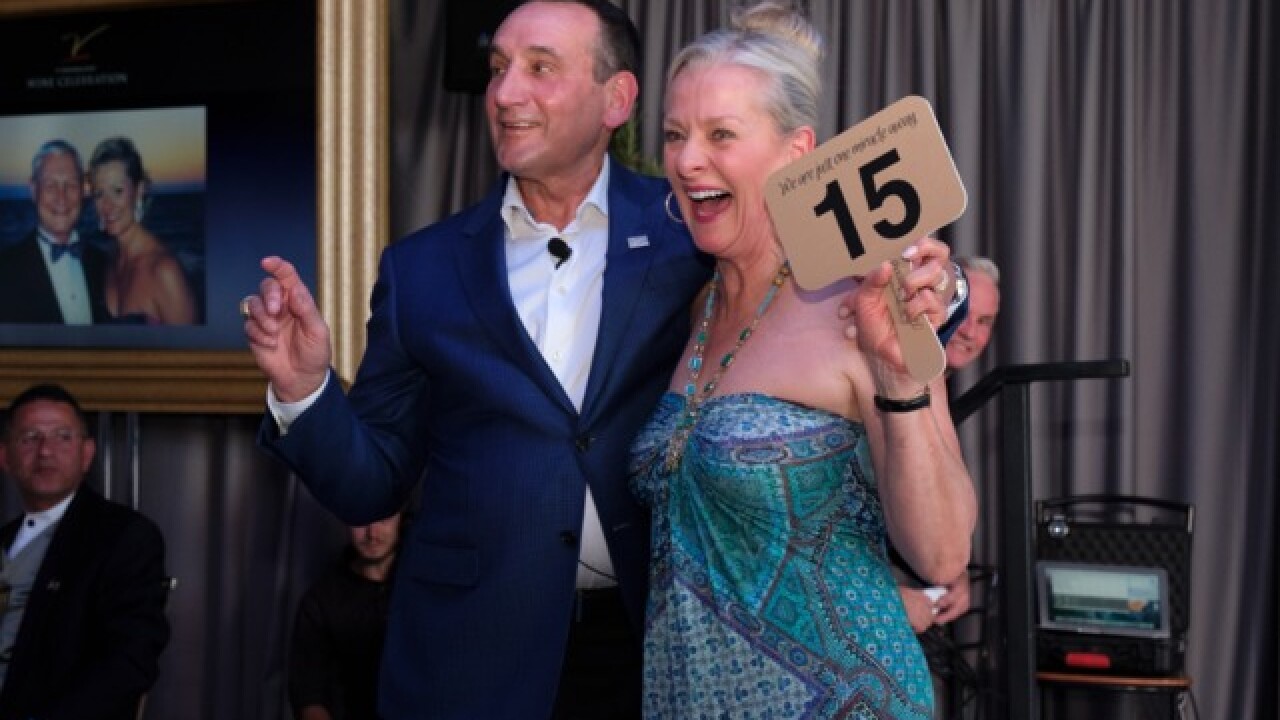 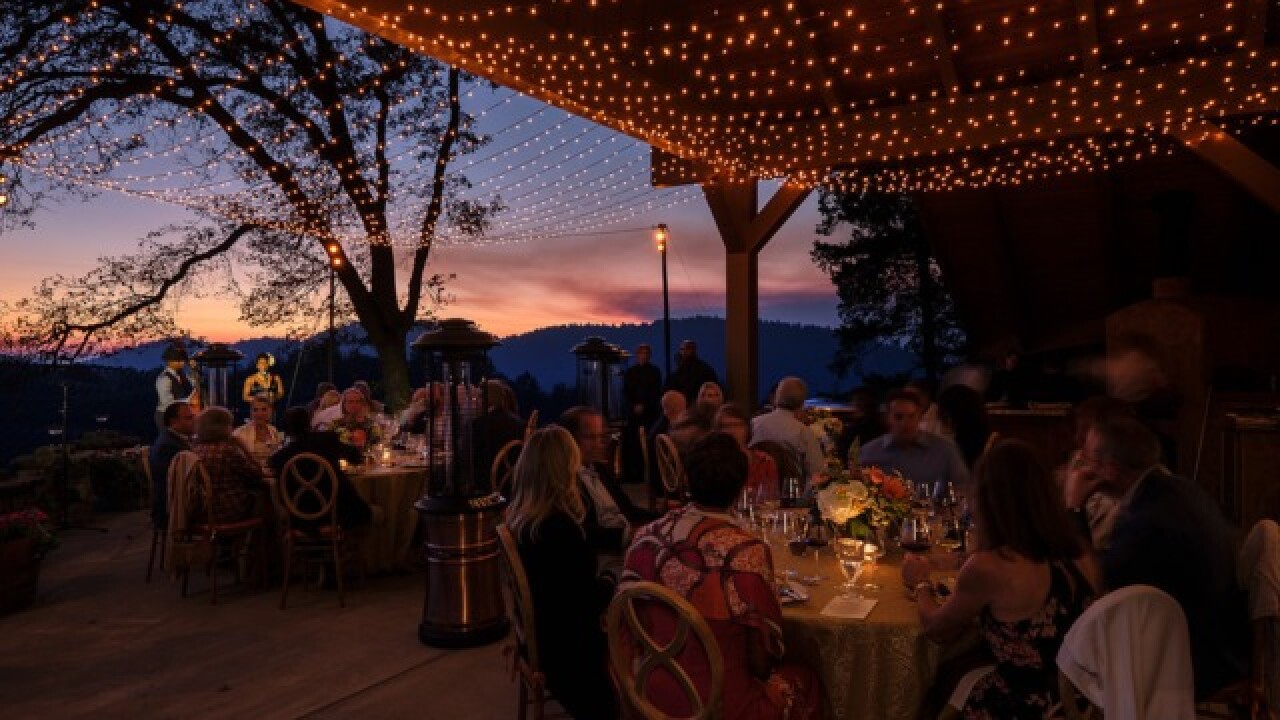 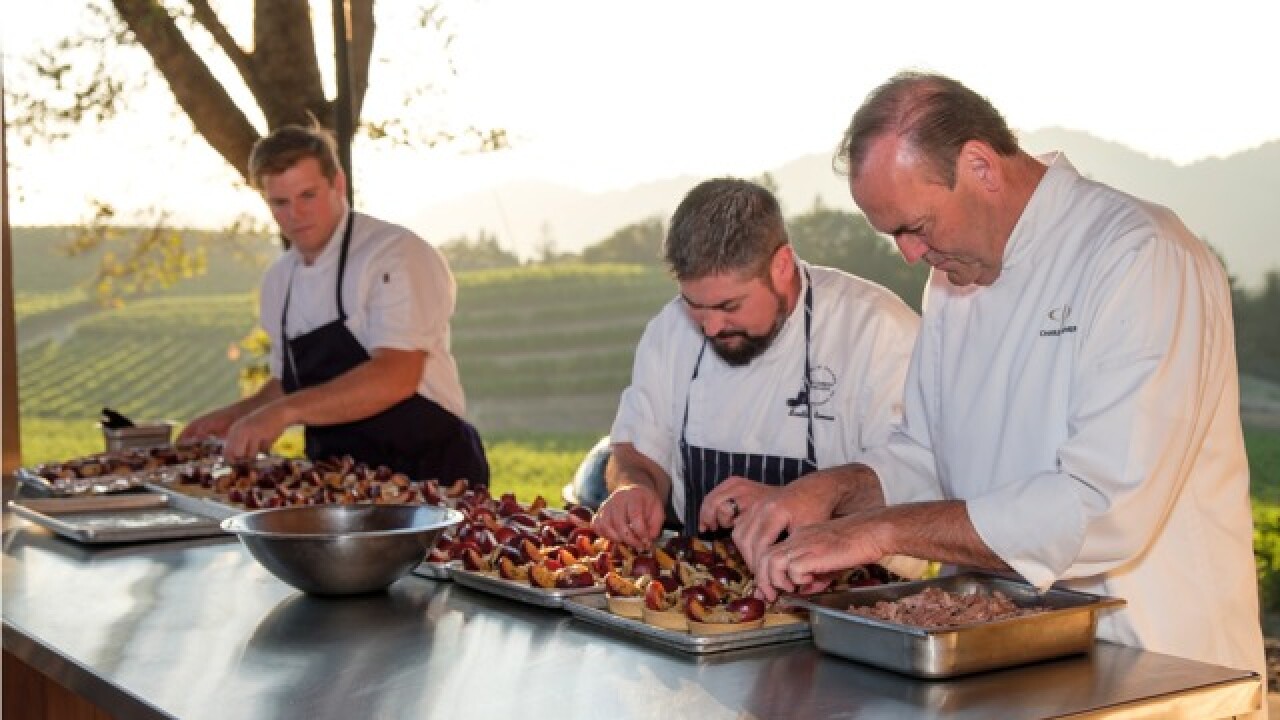 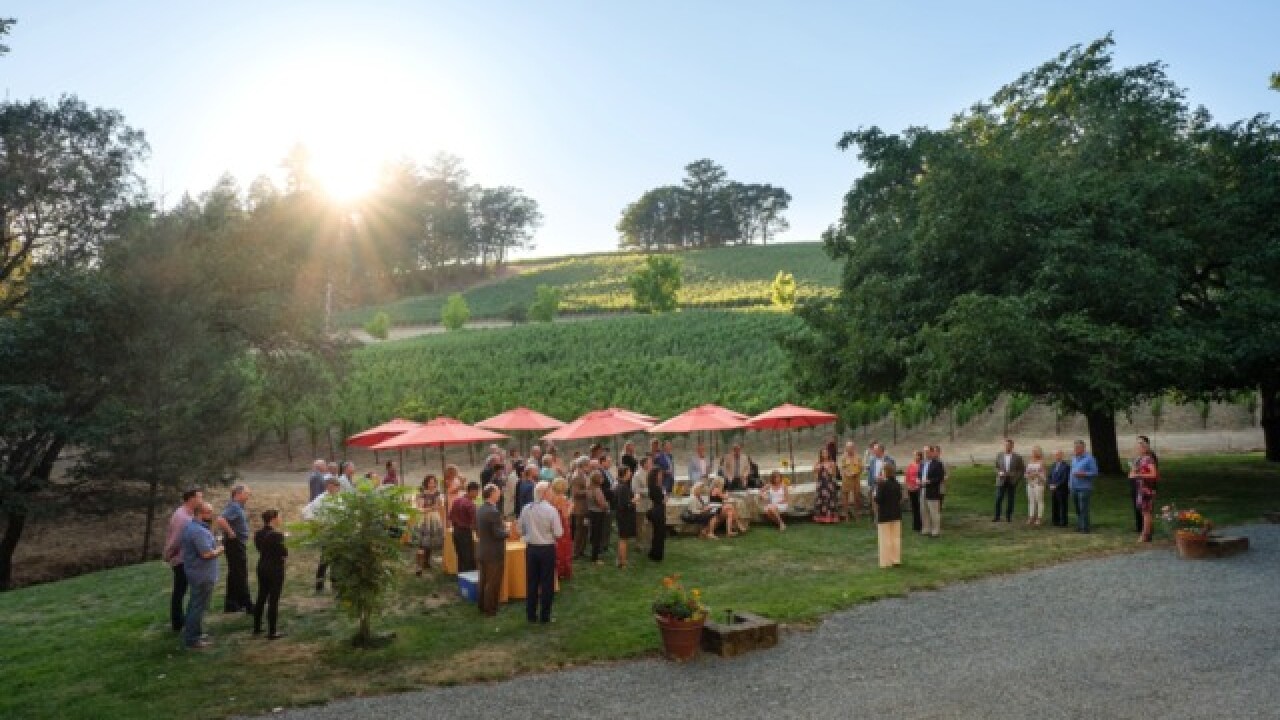 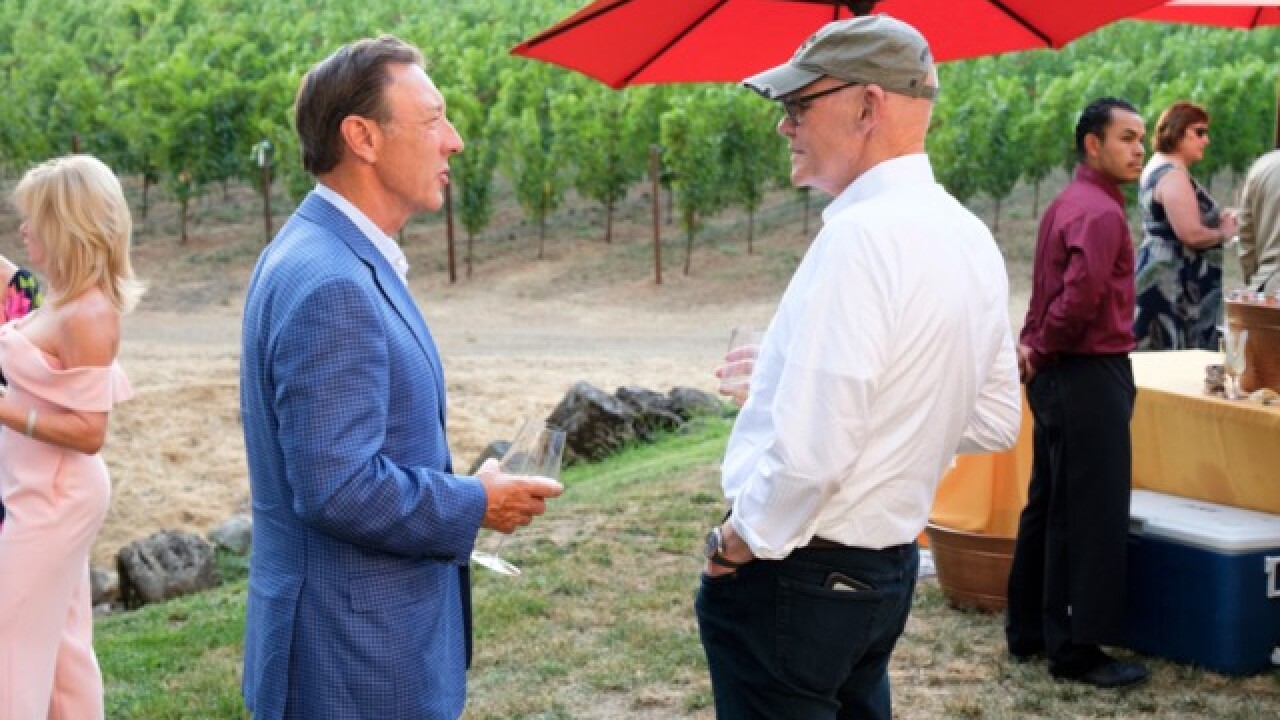 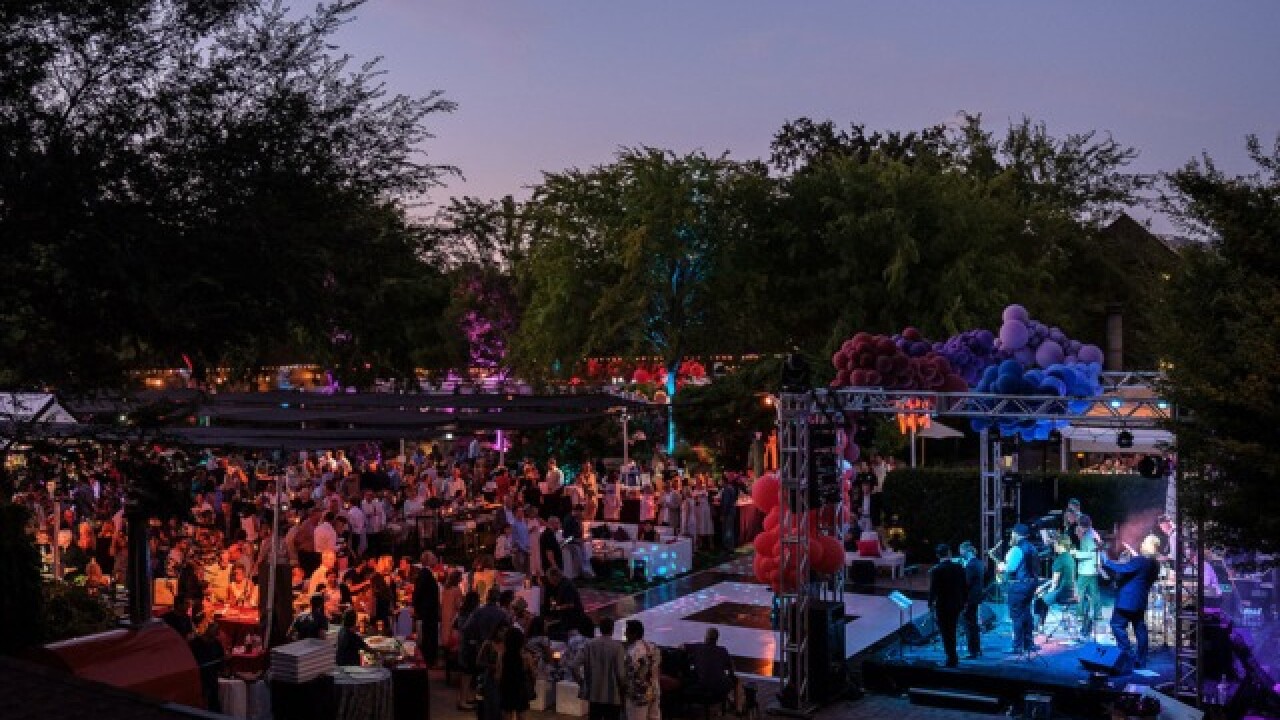 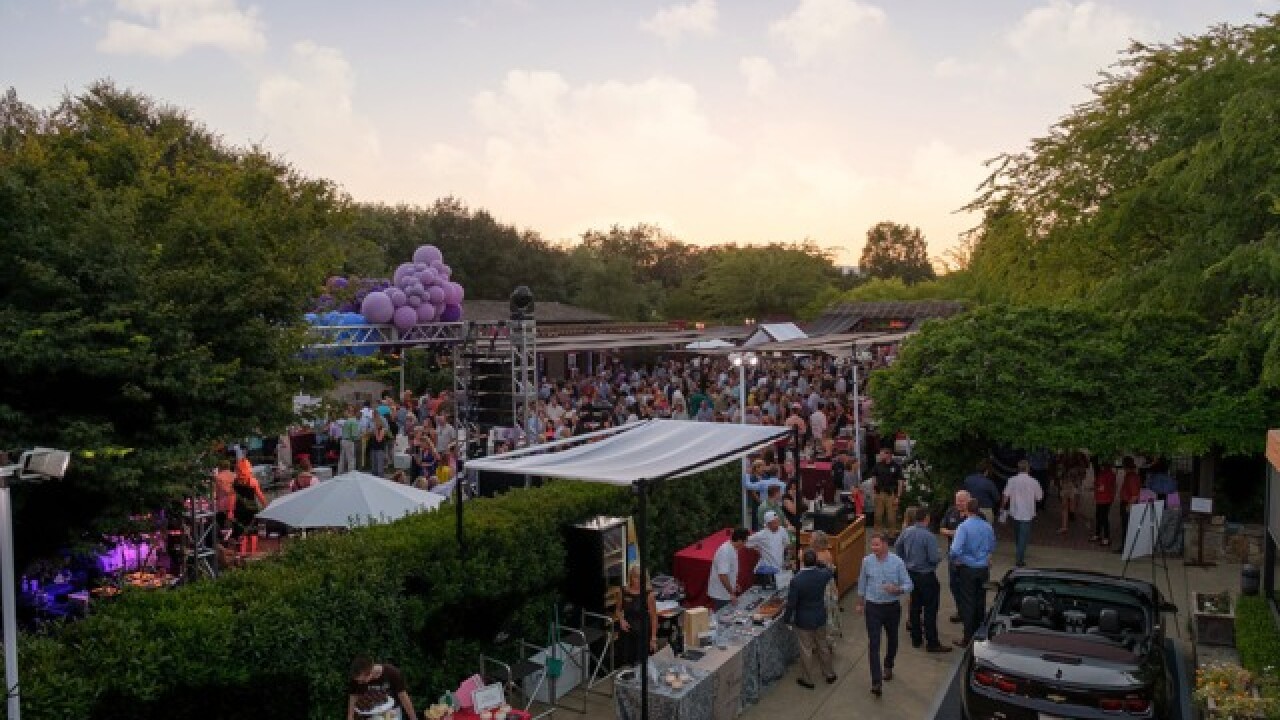 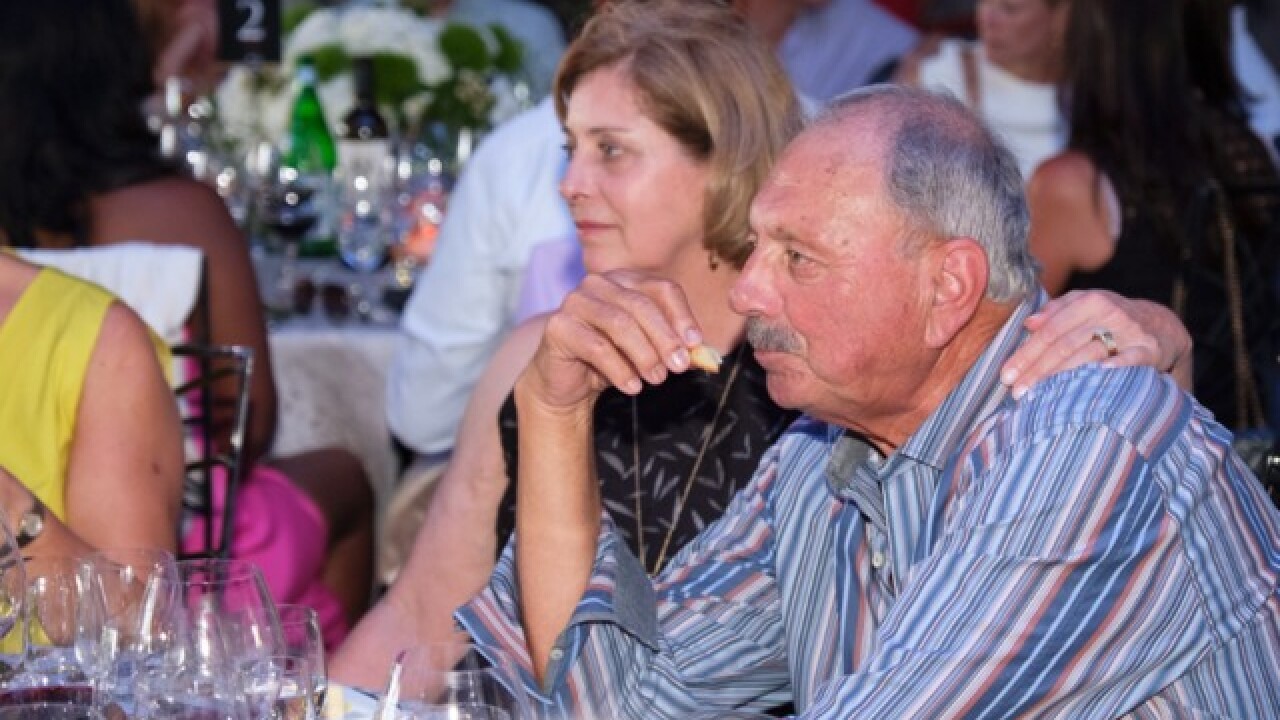 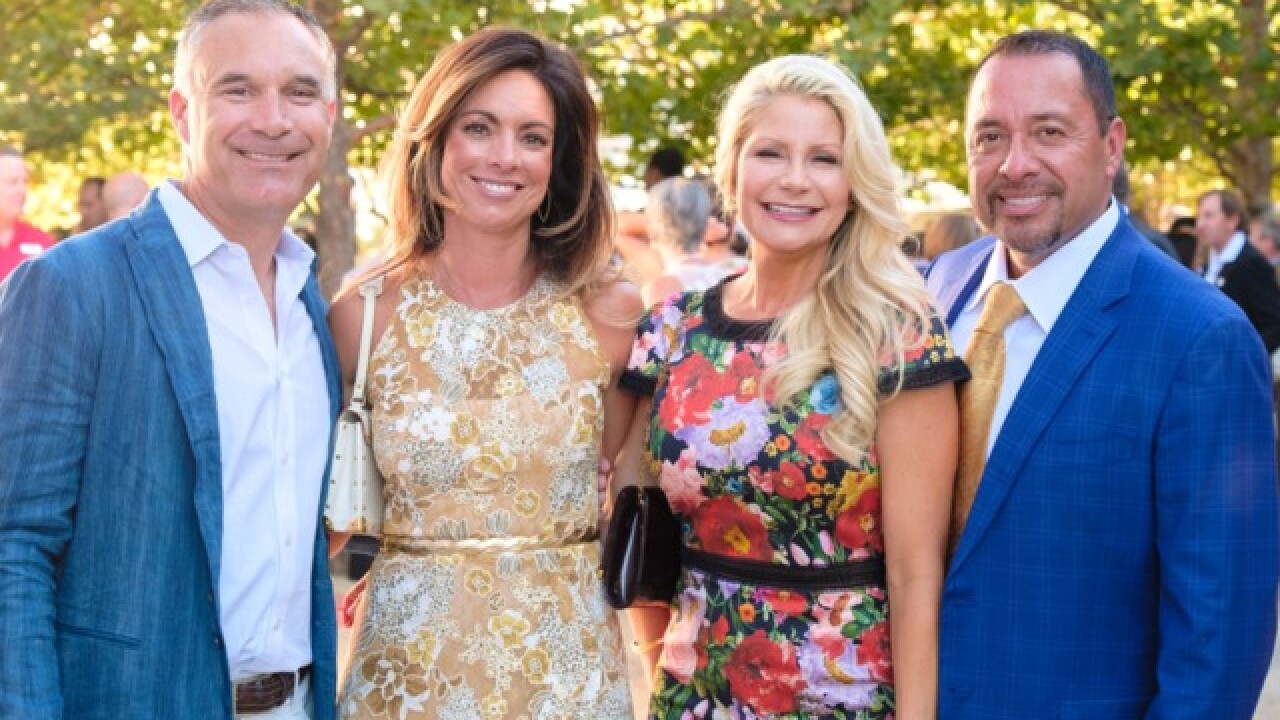 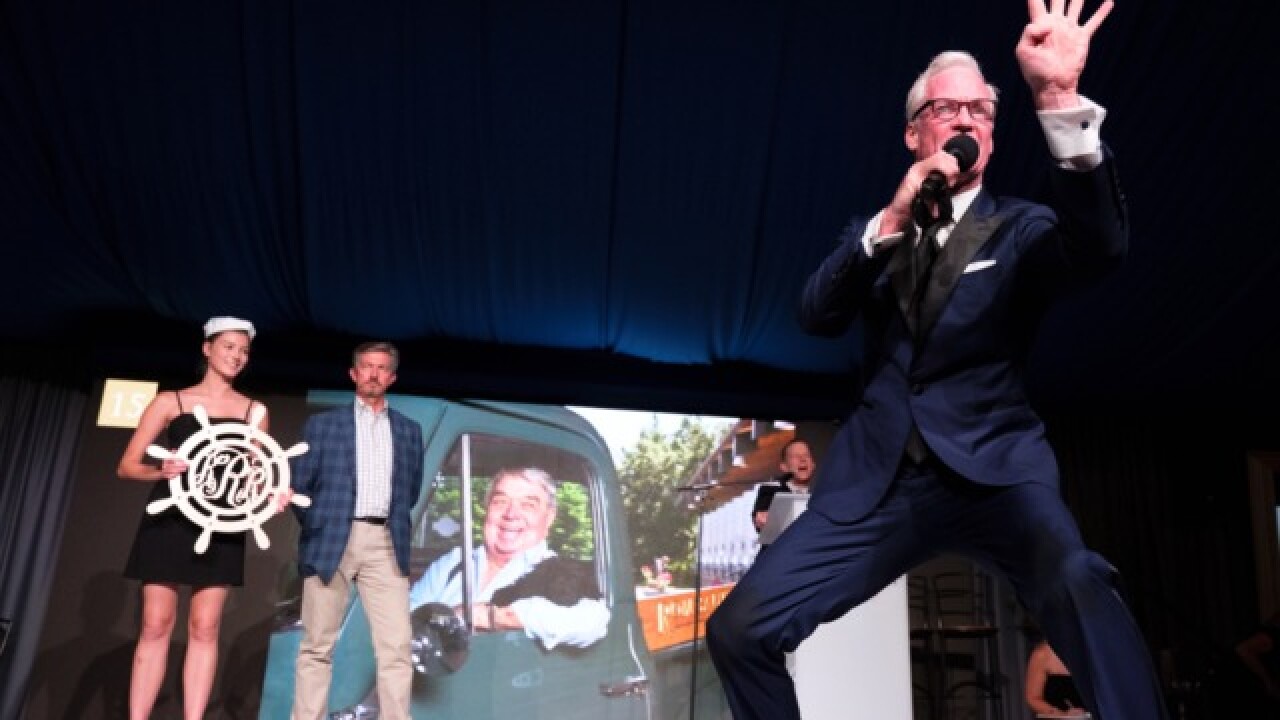 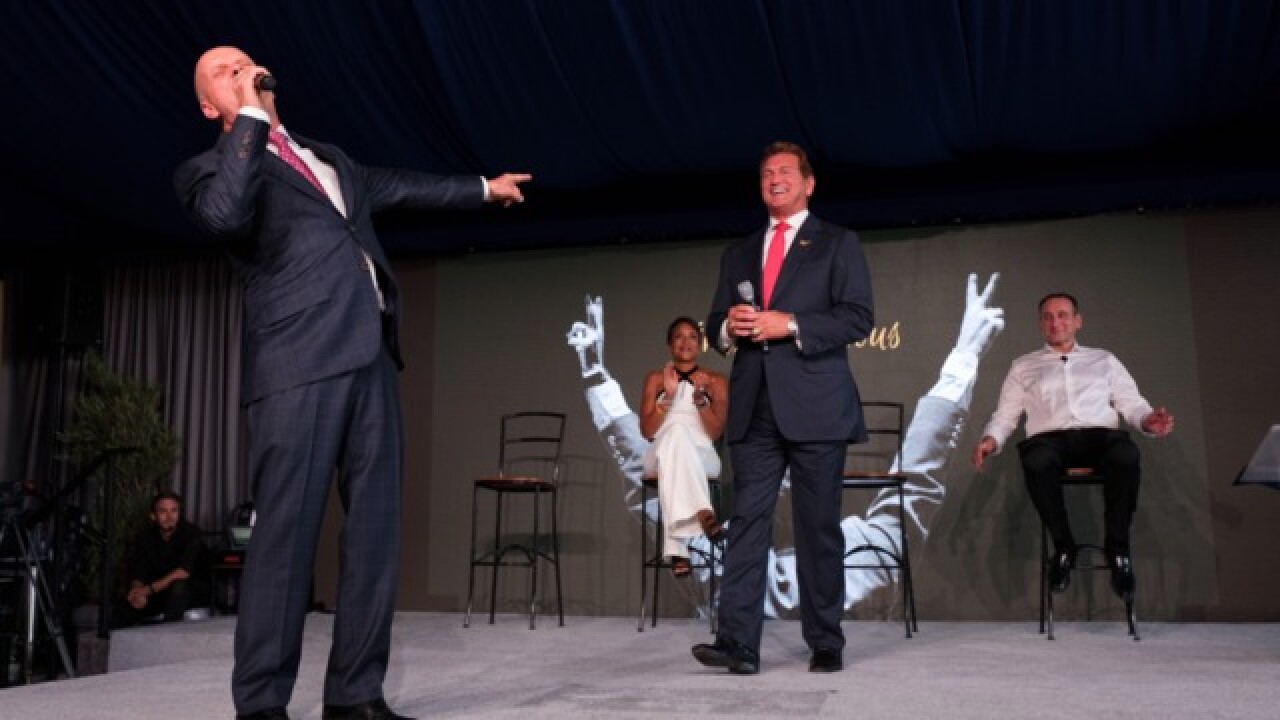 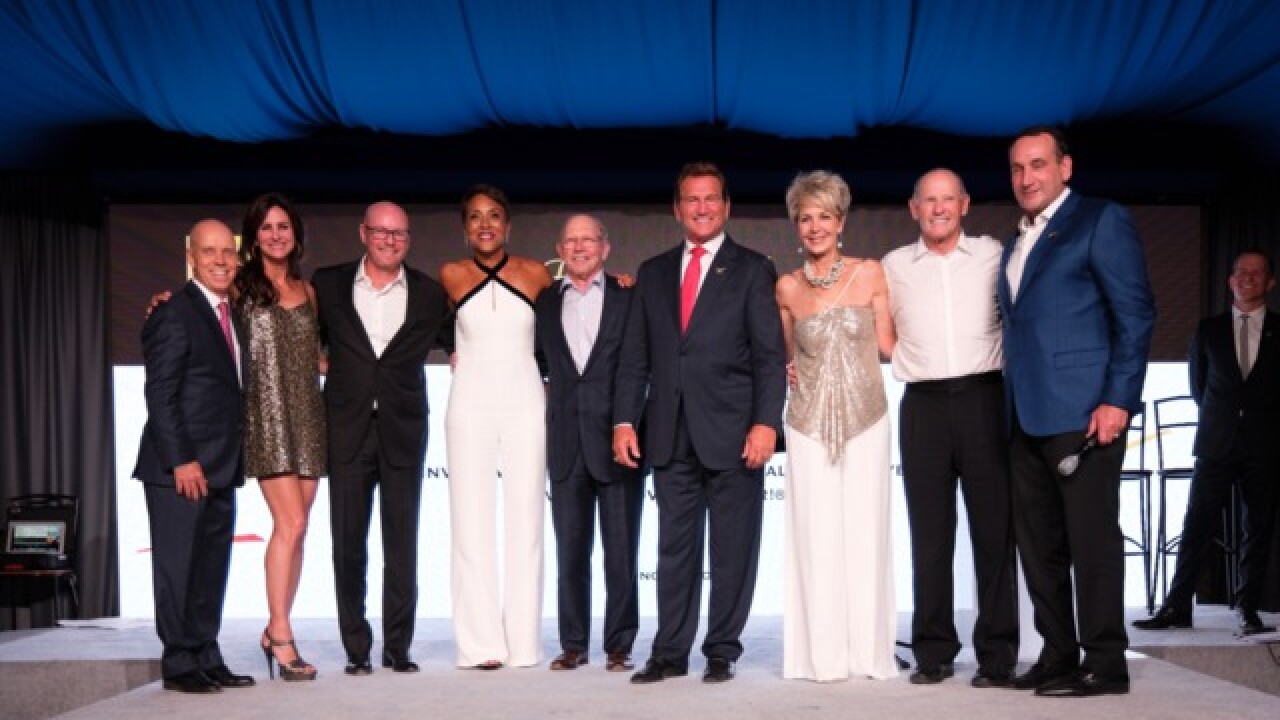 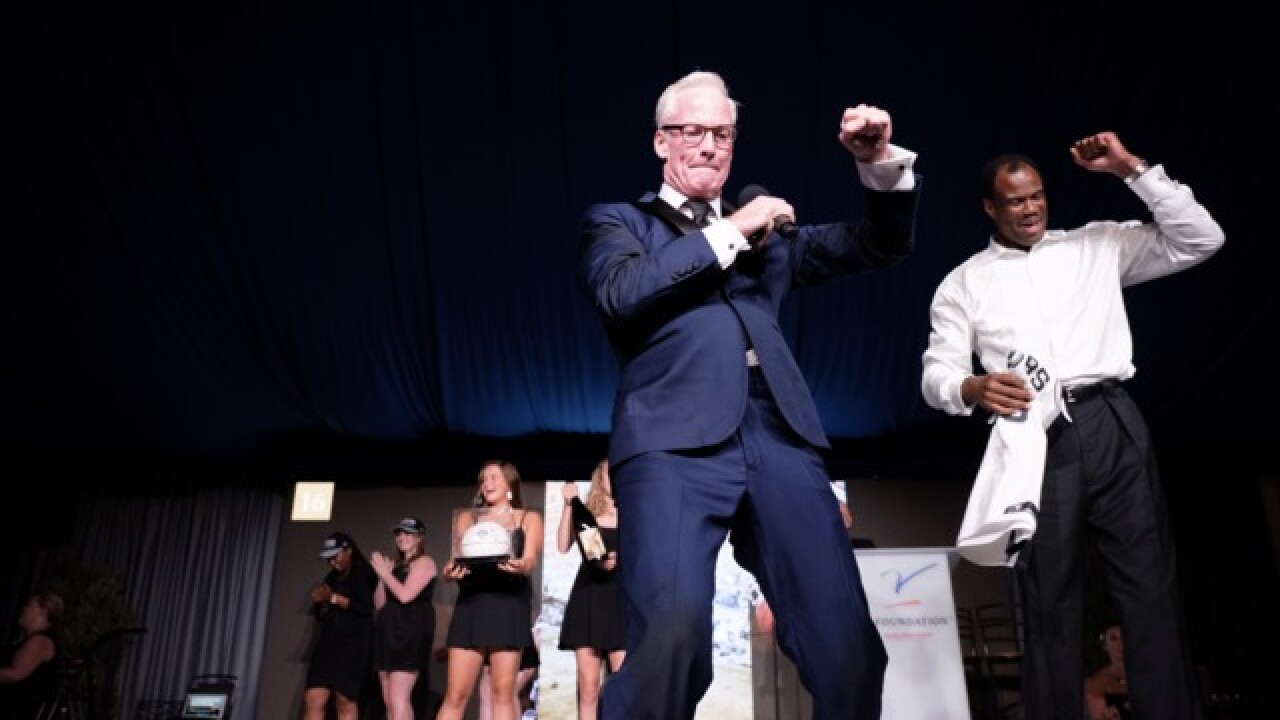 The V Foundation for Cancer Research is a charitable foundation dedicated to aiding in the search for a cure for cancer. Through its annual Wine Celebration alone, the Foundation has raised over $100 million since 1999, funding hundreds of research grants around the country.

"We donate 100% of the money raised at the V Foundation Wine Celebration,” said Suzanne Pride Bryan, Vintner Grant honoree and co-owner of Pride Mountain Vineyards. “That money goes directly into the hands of the doctors who are working so hard to eradicate cancer. And there isn’t just one kind of cure for cancer—there are hundreds of cancers, each requiring its own cure. Cancer hides. It fools your body’s immune system into thinking it’s a friend, not a foe. Why can we fight off the flu but we can’t fight off cancer? The medical community is getting closer to finding a cure, but we need money. There are so many cancer research projects that are ready to be funded, but aren’t—due to lack of funding. So that money has to come from us if we want more cancer research projects funded. It has to come from the private sector, and we can do this.”

The Story Behind the V Foundation
Jim Valvano, the legendary North Carolina State University men’s basketball coach and ESPN commentator, once said, “There are 86,400 seconds in a day. It’s up to you to decide what to do with them.”

Valvano was diagnosed with terminal cancer in 1993—but that didn’t bring his story to an end. Valvano’s vibrant life inspired ESPN to help create the V Foundation, and in 1999 the Foundation held its inaugural Wine Celebration in Napa Valley, which is the signature fundraising event for the foundation.

Since then, the V Foundation and its yearly festivities have helped carry out Valvano’s mission, which he stated himself in one of his final interviews. “I want to help every cancer patient I can now,” he said. “I don’t know if I can handle that, but it’s the only conceivable good that can come out of this.”

In Good Company
The Wine Celebration is always a star-studded affair, and this year was no different. The weekend-long charity auction was hosted by some big names, including Roberts—who is a two-time cancer survivor.

Roberts was joined by Coach K, the head men’s basketball coach at Duke University, who opened up about the similarities between cancer research and basketball—collaboration being chief among them.

Hamilton, who nabbed the gold for the United States at the 1984 Winter Olympics in Sarajevo, is also a cancer survivor.

Together, the noteworthy hosts presided over a jam-packed weekend of auctions, parties, dinners and a cancer research symposium—and, of course, some excellent wine.

Thursday, August 2nd
Soon after guests arrived in the Napa Valley on Thursday, Aug. 2, they were treated to their first luxurious event: the Hall of Fame Luncheon at Harbison Estate, sponsored by founding partner ESPN.

Friday, August 3rd
After an evening of flowing wine and compelling conversation, Friday, Aug. 3 brought the Presidents Club & Vintner Grant Honoree Luncheon, sponsored by ESPN and Bentley Motors. Hosted by Far Niente Winery, which is known for its sophisticated Cabernets and Chardonnays, the luncheon recognized Vintner Grant honorees for their consistent support of the V Foundation.

The V Foundation will award a grant, in their collective names, to support breast cancer research. Those honorees were themselves all breast cancer survivors: Lauren Ackerman, Karen Aldoroty, Suzanne Pride Bryan, Gina Gallo, and Robin Lail and Beth Novak Milliken, in memory of Mary Weber Novak.

That evening, guests were treated to the “Rock the V” party at The Pavilion at The Vintage Estates in Yountville. The event celebrated the All-Stars of Cancer research, and guests mingled, sipped wine and enjoyed tunes from the first “V Wine Celebration All-Star Band” featuring Christian Hoff with special guests Michael Tiernan, Jonny Tarr and friends.

Some of Napa Valley’s most prominent restaurateurs and vintners provided the evening’s refreshments, and a “Five for Fighting” barrel auction gave attendees the chance to bid on an exclusive, one-of-a-kind case of wine. There were five cases—one for each host—from AldenAlli, Pride Mountain Vineyards, Fort Ross Vineyard & Winery, O’Brien Estate and Williams Selyem.

“Rock the V is a great party with fabulous food, wine and music. Tim and Donna Egan provided a home for the V Foundation Wine Celebration 20 years ago and Hotel Villagio, and more recently Vintage House, have continued to host our guests ever since,” said Julie Allegro, Chairwoman of the V Foundation Wine Celebration.
“Even after Tim and Donna both passed away, the Estate remained our partner, and with its central location, luxury guest experience, and beautiful grounds, it’s the ideal headquarters for the V Foundation.”

Saturday, August 4th
The event continued Saturday afternoon with “Answer for Cancer,” a cancer research symposium that was open to the public. The two-hour session covered recent discoveries in clinical applications, new diagnostics and alternative treatment methods. It was led by Robert Bast, Jr., M.D., Vice President for Translational Research at the University of Texas M.D. Anderson Cancer Center in Houston and head of the V Foundation’s Scientific Advisory Committee.

“The $18 million raised on the 20th anniversary event exceeded my expectations and drove home the power of community involvement to make a difference, even in the face of difficult or audacious goals (curing cancer). The rate of progress is accelerating due in large part to the focus of organizations like the V Foundation. And the contributions of the ‘V Family’—the amazing scientific advisors, our determined cancer physicians, the generous donors and the V’s top-tier employees,” said Mark Colella, V Foundation Wine Celebration board member. “The giving is inspiring and the progress is real, concrete, and making a difference for so many people. People we know and people we will never meet but who will benefit from the V Foundation family. It was truly an amazing and special weekend, ‘A MOMENT,’ as Coach K would say.”

A Gala to Remember
The weekend’s festivities culminated with the gala dinner and exciting Live Auction at Nickel & Nickel Winery, host of the Wine Celebration’s main event since 2005. The theme for this year’s gala, “Time is Precious,” came from Jim Valvano’s speech at the 1993 ESPY Awards.

“Time is very precious to me,” Valvano said at the time. “I don’t know how much I have left, and I have some things I would like to say. Hopefully, at the end, I will have said something that will be important to other people, too.”

Everyone made the most of their time by bidding on ultra-upscale items, including a 2011 limited-edition Neiman Marcus Convertible Chevrolet Camaro, which was one of only 100 made, packaged with a weekend at the Davis Estate’s guest house. Other auction highlights included a Harbison 20-year vertical of wine, including a 9-liter from their first harvest that produced only a single barrel, and a stylish dinner party by Ayesha Curry and Michael Mina, co-owners of International Smoke, paired with wines at Gemstone Vineyard.

“The Gala was an incredible celebration of not only the history of the V foundation, but a remarkable appreciation for how far we’ve come and an inspiring look ahead to what we hope will be a short future until we find a cure for cancer,” said Amy Marks Dornbusch, board member and president of Gemstone Vineyards.

“It was awe inspiring to not only reach our goal of a $5 million match to our fund-a-need, but to watch the needle far surpass the goal to over $18 million. It’s the largest attendance we’ve ever had and so many people in the room—longtime supporters and first-time attendees all raised their paddles, which is truly awesome. When the hosts were all onstage sharing their personal stories and experiences with their cancer battles, it was truly inspiring. They all moved us to tears and made us laugh, and then pushed us to raise more money than we’ve raised in 20 years. Jim Valvano would’ve been completely blown away.”

The annual V Foundation Wine Celebration was founded in 1999 by Chairwoman Julie Allegro, the daughter of retired ESPN executive vice president Jim Allegro. She spoke about the importance of the V Foundation’s mission, and what the charity is able to accomplish through its annual festivities.

“The V Foundation has spent 25 years funding excellence in cancer research,” Allegro said. “Twenty-five years ago, the diagnosis and prognosis related to cancer were not as optimistic as today. Because of research, we have earlier diagnoses, a better understanding of what causes some cancers, more positive prognoses of some cancers and therapies designed to kill cancer while preserving the patient’s overall health.”

As the last wine bottles were uncorked Saturday evening, another V Foundation Wine Celebration was coming to a close. But for those with a passion for wine and a giving heart, there’s always next year.

Jennifer Boden is a 10News travel contributor. She is the founder and publisher of Dine and Travel. Jennifer, a former news anchor who lives and plays in Northern California’s Wine Country.