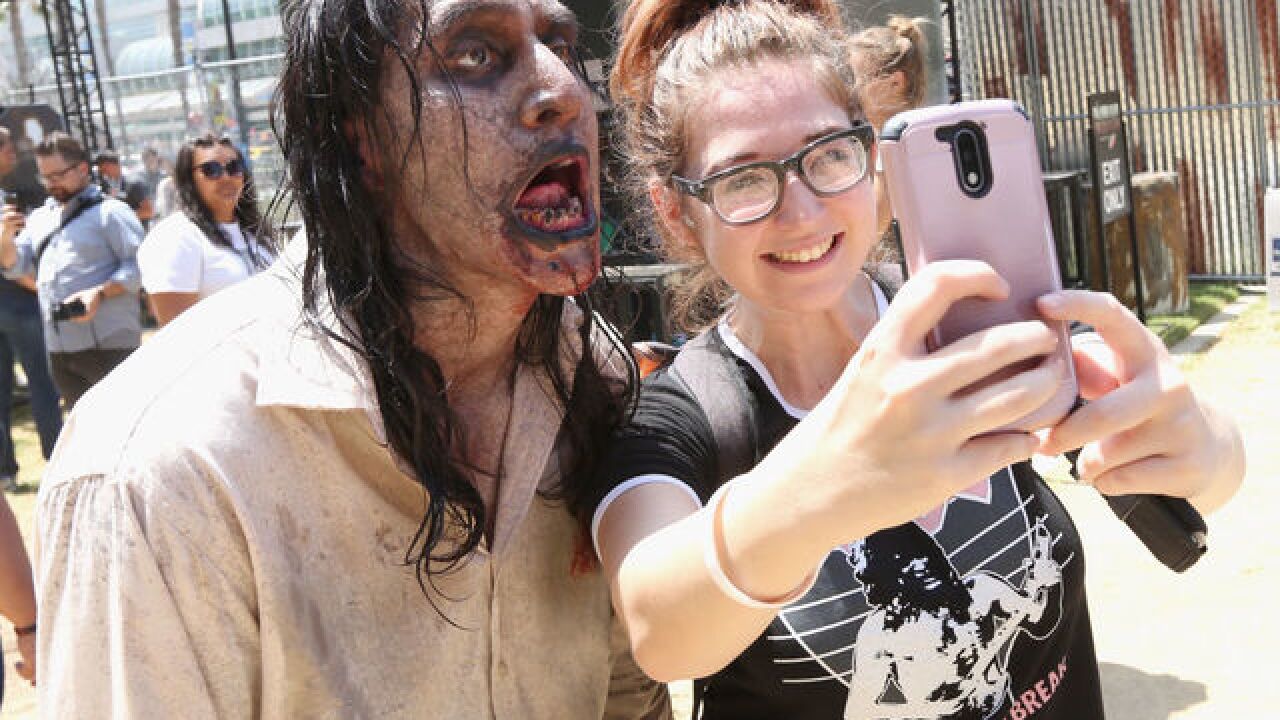 This year proves to be no exception, with off-site experiences featuring fans' favorite shows, movies, and comic book icons.

Many of these experiences are completely free to fans! (As long as they can tolerate a line.)

Here's a look at the off-site experiences open to fans outside the convention center this year:

(We'll be adding more events and locations as they're announced.)

Tickets for "Conan" tapings at SDCC go notoriously fast, but there's always a standby list! Try to snag some tickets to a taping, which will feature visits by stars from "Glass," "Predator," "Breaking Bad," and "Aquaman." Check back to the Conan website for tickets .

Physically experience the force of superhero powers, as you're harnessed to a bungee and propelled backward. Fans can also create their own ROXXON Corp badge and lanyard, which includes a secret code for the chance at a range of prizes.

AMC's "The Walking Dead" and "Fear the Walking Dead" fan site will feature an immersive walk-through of both hit series, including The Sanctuary, a 22-foot "Zombie slide," and photo opportunities with a walker or Negan's "flaming Lucille" baseball bat.

Walk through (literally) the DC Universe's original and upcoming world of comics, including Dick Grayson’s Titans loft, the swamps of Swamp Thing, Harley Quinn's chaos room, or jump into action with Batman. Fans can register here ahead of time for the offsite here .

Visit the town of NBC's "The Good Place," as Tin Fish is transformed into the perfect neighborhood. Fans can check out photo and video opportunities, and special menus next door at "Good Plates." Fans can pre-register for the experience here .

Fans of "South Park" will be taken into one of Cartman's crazy schemes and have a limited amount of time to escape their situation through a series of puzzles about the show.

Swing by 701 8th Ave. for "gross-eries" or "hot coffin" at Universal Studios' "Boodega" marketplace for some exciting exclusives created just for the shop.

To celebrate the 25th anniversary of the film "Demolition Man," WB is hosting a pop-up Taco Bell modeled after the film's version of the fast-food stop. In the movie, Taco Bell was the only restaurant to survive the "franchise wars." Expect nacho fries and exclusive finds.

Fans of "Buffy the Vampire Slayer" can become actual slayers during a special scavenger hunt at SDCC. Sign up before starting on June 27 at Shop.Fox.com, and get ready to locate "vampire nests" across the Gaslamp for cool prizes like Funko figures, pins, t-shirts, and more.

Fans will be dropped into a hyper-reality virtual reality spy experience in the Middle East at the Jack Ryan Experience. Recruits will complete spy training, an escape room challenge, VR missions, and explore a Middle Eastern bazaar.

Adult Swim on the Green

Adult Swim is bringing its own state park to the lawn behind the convention center, complete with all the fun and games of a summer camp. Games like rowing races, an archery contest, merit badges, and hot dog roasting can all be found at this 18-years and older area. RSVP to get in  here .

ScareDiego is bringing a special, early look by New Line Cinema and Warner Bros. at "It: Chapter Two," "The Nun," and "The Conjuring" along with filmmaker and talent appearances.

Take some time to chill and unwind with friendly felines at The Cat Cafe. For $20, guests get a drink or food item, and 45 minutes of time to spend with adoptable cats from The Rescue House. The number of sessions is limited, register here .

Syfy is giving SDCC fans fun throughout the day at the New Children's Museum. They's be offering exclusive merchandise during the day, including mystery box, competitions involving a human claw machine, bingo trolleys roaming the Gaslamp, and the karaoke bus is back! At night, head over for some epic dance parties with fans.

When: July 19-22; Where: The Experience at Comic-Con (Lexus Premiere lot); Cost: Price of food

The Hello Kitty Cafe food truck will be serving delicious treats, including themed donuts and other morsels, just outside of Petco Park.

The Great SherlockeDCC Scavenger Hunt returns to SDCC, sending participants on a wild chase for clues. Tasks include making "a fool of yourself in public as you try and track down the best Dr. Strange and Iron Man cosplayers to take a video saying ‘No shit, Sherlock’ for 1,000 points." But don't worry, it's worth it, with prizes valued at more than $500 at stake. Sign up here .

USA Networks is bringing an immersive "The Purge" popup shop to SDCC, where fans can shop for tongue-in-cheek merchandise, masks, energy drinks, and more. There will also be product demos, photo ops, and a look at the upcoming TV series.

Experience what it's like to live in the "unluckiest town on Earth" at the "Castle Rock" bed and breakfast offsite. Inside, fans can also take a breather at Hulu's campsite lounge.