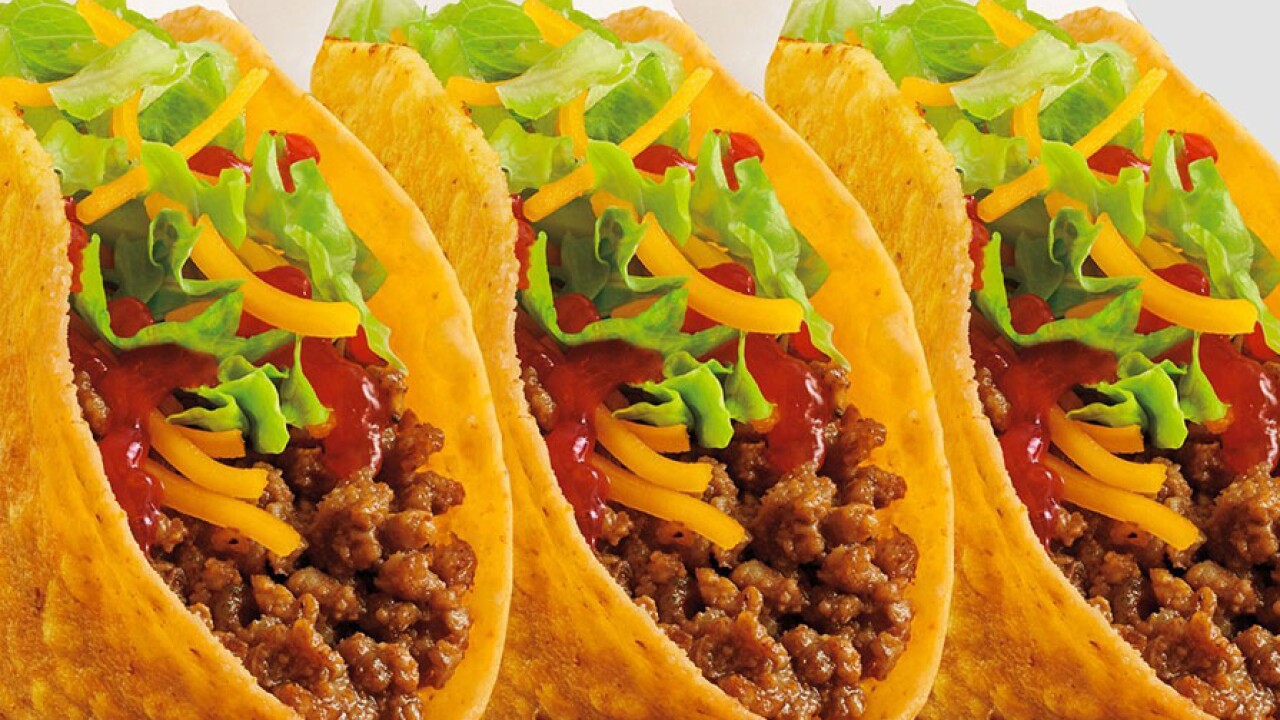 (CNN) -- Burger King is trying to get customers' attention with something a little different: Tacos.

The burger chain started selling crunchy tacos on Tuesday. They cost $1 in most places, but are more expensive in Alaska and Hawaii, and will only be available for a limited time.

Burger King first tested out tacos in western states. "We've seen success with tacos in those restaurants and knew it was time to bring this west coast favorite nationwide," Chris Finazzo, president of North America for Burger King, said in a statement. The new item adds "variety" to Burger King's snack offerings, he added.

Fast food chains use limited-time offerings to build hype and keep their brands top of mind with consumers. And tacos in particular are a good way to attract customers, said Neil Saunders, managing director of GlobalData Retail, a research and consulting firm.

"Tacos remain very popular with consumers," Saunders said, adding that fast food companies that wouldn't traditionally sell tacos may be "keen to get a slice of that action."

Jack in the Box in particular has had great success with its taco. The item has been "a #1 seller and a fan favorite for years," Jen Kennedy, VP of product marketing at Jack in the Box, told CNN Business in a recent interview. She said the taco has been a "stand out distinction for us." Jack in the Box also just started selling tiny, bite-sized tacos, but it's too early to say how they're doing.

With its taco promotion, Burger King is likely trying to do more than just cash in on a specific, popular menu item, Saunders noted. It's also trying to create buzz for the brand with something unexpected.

"Some of it is marketing," Saunders said, adding that Burger King is adept at getting attention with creative menu innovations. For Halloween, the chain served a burger it claimed helped induce nightmares. More recently, to celebrate the third season of Netflix's "Stranger Things," it sold upside-down Whoppers in 1980s-era packaging.

There is a possible downside to attention-grabbing stunts, even successful ones. They could distract Burger King from focusing on creating growth within its main menu, Saunders said.

"They have to be careful with some of these promotions," he warned. "Burger King can be very haphazard with the menu." That can be a good thing because consumers like to try new things. But "sometimes you get the impression that Burger King chases after the shiny objects rather than focusing on the core business."

the best part of going out? getting tacos afterwards. introducing our Crispy Taco, only $1 and only at Burger King. pic.twitter.com/sgMO2vODeZ