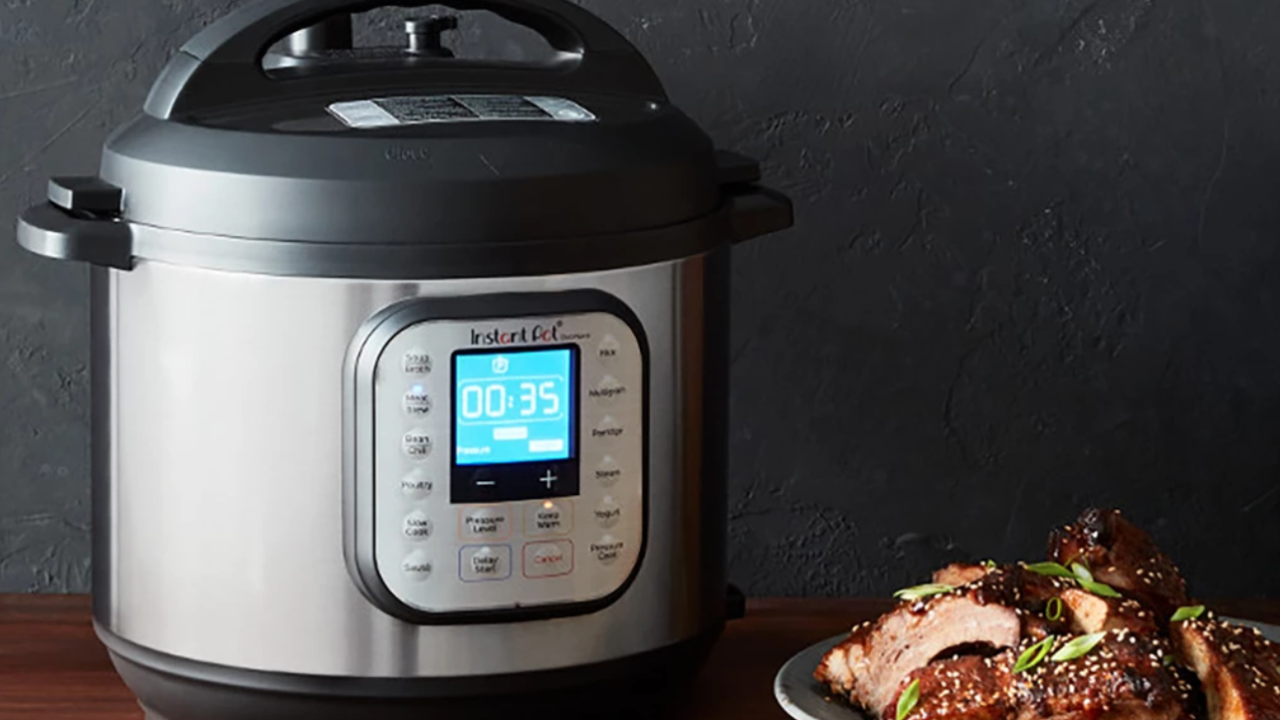 Unless you’ve been living under a rock or have perhaps never stepped foot in a kitchen, you’ve at least heard of the Instant Pot — even if you don’t actually own one. The popular kitchen gadget is almost always a top seller on Amazon’s Prime Day and Black Friday and, if you talk to pretty much anyone who owns one (I know several people), they’ll tell you they love it.

What makes it so special? The Instant Pot can replace several appliances, so if you’re not a fan of having clutter on your counter, the Instant Pot is a big win. The gadget can be used in place of a pressure cooker, sauté pan, steamer, slow cooker, rice cooker, food warmer and even yogurt maker. You can even use it to make wine! You can cook pretty much anything in it  — and quickly — from soups and chilis to meat and even desserts.

While I’ve borrowed the Instant Pot from others before, I’ve never actually owned one. It’s always been on my mind during holiday sales, but I’ve never taken the plunge. So when Instant Brands reached out with an offer to test their new Duo Nova model, I happily obliged!

A quick note: While I did receive the 6-quart Duo Nova for free, my opinions in this review are my own. As a first-time Instant Pot owner — but not a first-time user — I wanted to test the new features that make the Duo Nova different than previous Instant Pot models, specifically the Duo, from which the Duo Nova is a direct upgrade.

The new Duo Nova has a fancier interface with a status bar to monitor your progress, a delay start button for easy breakfasts, an easy seal lid that automatically sets to seal when you close it, an easy steam release button that keeps your fingers away from the hot steam and new easy-to-read icons.

The status bar, I have to say, is pretty genius. Not only am I impatient when I’m hungry, but because I was not super experienced with the Instant Pot, knowing the progress of my meal was helpful.

All of the recipes I found and tested mentioned only the amount of time the food would take to cook, not taking into account the length of time required for the Instant Pot to come to pressure. Because of that, I was a bit concerned it wasn’t working correctly until the status bar changed to let me know it had come to pressure and begun cooking. Without it, I probably would have started Googling “instant pot not working.”

While I have not used every setting yet (the yogurt and rice functions still await testing), I did make three different recipes to test the pot’s versatility and new functionality.

This Creamy Vegan White Bean Soup recipe worked great for testing out two functions: saute and delayed start. Both worked perfectly and the soup turned out fabulous. I nearly messed up the sauteing aspect because you actually do not put the lid on, but luckily the guidebook saved my meal.

While I used the delayed start in this instance just to test it out, this function would be particularly useful for breakfast, as you can throw everything into the Instant Pot the night before and have it ready when you wake up. Or if you know when you want to eat but your only time to prepare your meal is hours beforehand, this function will save the day.

Next up, my husband and I tried two different chilis. I don’t eat meat, so I followed this meatless chili recipe from Quorn. The recipe isn’t made specifically for an Instant Pot and I usually make it in my slow cooker, so I simply used the slow cooker setting on the Instant Pot and it turned out amazing!

I love my slow cooker, as I find that it lends a specific texture and flavor to meals (including chili) they just don’t get when they’re cooked on the stove. The flavors in chili, for one, don’t seem as strong when cooked quickly. But somehow, the Instant Pot managed to make my chili feel like it had been simmering all day long.

The key is in adjusting the temperature, as simply pressing “slow cook” doesn’t do it. You also need to choose between “less,” “normal” and “more” (essentially what would be labeled as “keep warm,” “low” and “high” on an actual slow cooker). I chose “normal” and it took about 3.5 to four hours, while I usually give my slow cooker about 6-8 hours on low.

My husband, meanwhile, followed this Keto chili recipe from Wholesome Yum, using the chili button instead of the slow cooker function.

He also made a pulled chicken with bbq sauce. He didn’t follow a recipe for this one. He just threw frozen chicken, sauce and some seasonings into the Instant Pot and let it do its magic. Again, it did not disappoint and made enough shredded chicken mixture to last him all week.

I’ve lost count of how many times my husband says he loves the Instant Pot, raving that we “should have bought one years ago.” He doesn’t do a lot of cooking, so the fact that you can just throw food into the Instant Pot and hit a few buttons is a big win for him. While I love it because it doesn’t take up much space (and actually takes the place of other appliances), his favorite thing is that food can be cooked quickly and easily — even for someone who doesn’t cook.

As for how much this upgraded Instant Pot costs, the Duo Nova costs $79, $99 or $119 depending on the size, which is about $20 more than the Duo. If you’re in the market for an Instant Pot or looking to upgrade your Duo, I can confidently say that the $20 is definitely worth the extra features. The cook progress indicator alone is worth $20 to me! You can get the Duo Nova on Amazon in black, white, red or teal.

If you want even more features, you may want to go with the Duo Evo Plus, which includes all the features of the Duo Nova, Smart Wi-Fi and Max, plus some additional features not available on any of the other Instant Pots.

If you’re looking to replace as many appliances as possible, however, the Ultra Instant Pot may be your best bet, as it replaces 10 appliances compared to the 7-in-1 on other models.

Here’s a look at the features on some of the other Instant Pots compared to the Duo Nova that I tested:

While I haven’t thrown out my slow cooker or any other gadgets just yet, I can definitely see the Duo Nova replacing them soon. Will you be trying the new Duo Nova Instant Pot?

The products and services mentioned below were selected independent of sales and advertising. However, Don't Waste Your Money may receive a small commission from the purchase of any products or services through an affiliate link to the retailer's website.