Welcome, Eric Hosmer...but this column isn't about you 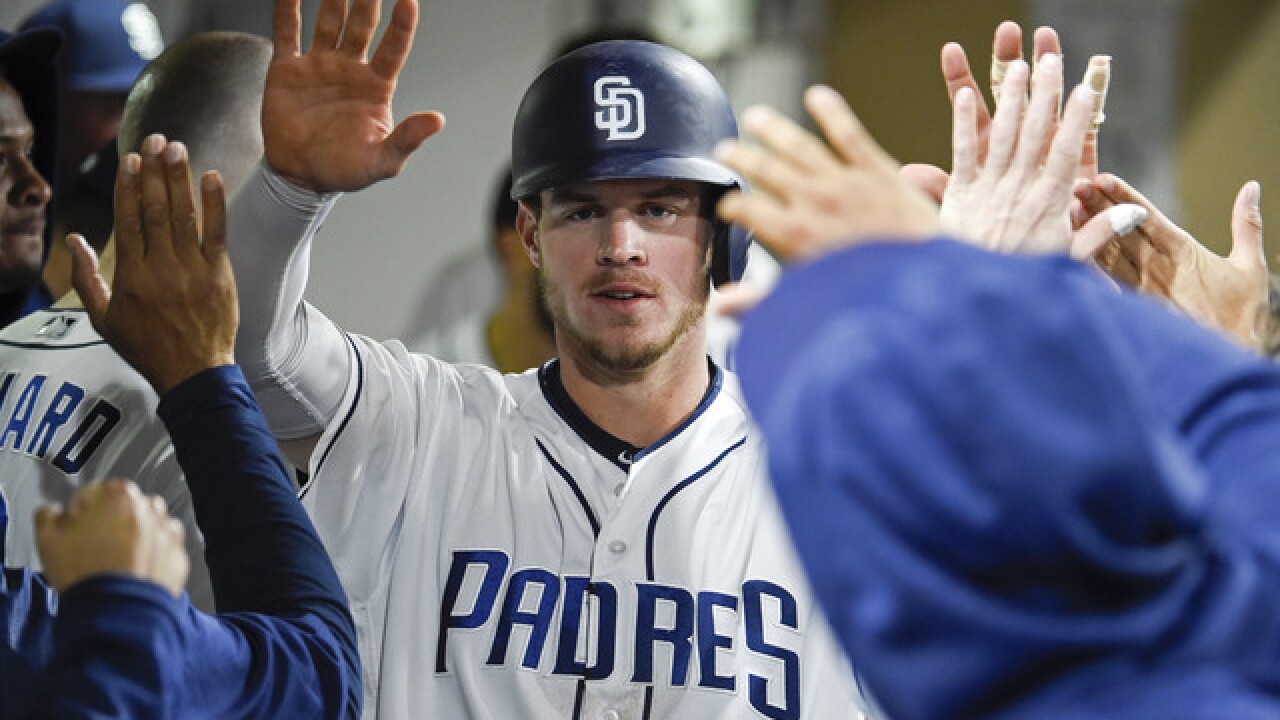 Image copyright 2018 Getty Images. All rights reserved. This material may not be published, broadcast, rewritten, or redistributed.
Denis Poroy
<p>SAN DIEGO, CA - SEPTEMBER 21: Wil Myers #4 of the San Diego Padres is congratulated after scoring during the sixth inning of a baseball game against the Colorado Rockies at PETCO Park on September 21, 2017 in San Diego, California. (Photo by Denis Poroy/Getty Images)</p>

SAN DIEGO (KGTV) -  One of the most naturally gifted and talented athletes to ever put on a Padres uniform headed out toward first base at the Peoria Sports Complex on Tuesday.

And then he passed up the position he's manned for the past two seasons and continued jogging out to right field.

You see, this column isn't about Eric Hosmer. It's about a much more important player to the Padres' future success, Wil Myers.

It would be easy to forget about Myers amidst the Hosmer hype. A franchise-record contract has that effect.

Just over a year ago, Myers was the one basking in the glow of a franchise-record $83 million deal with the Padres. Along with the money came the somewhat undefined title of "Face of the Franchise."

What happened next was a mediocre season, at least for someone possessing Wil's prodigious talent. 30 home runs was offset by a .243 batting average and career-high 180 strikeouts.

Was the spotlight too bright for the 27-year-old? The Padres' Chairman seems to think so. Ron Fowler told ESPN's Jerry Crasnick, "Myers has a lot of qualities, but he frankly does not want to be the leader in the clubhouse. That’s just not in his DNA. If there was a player who was more positive about us going after Eric than Myers, I don’t know who it would be.”

Fowler is drawing some criticism for revealing that one of his players has no interest in being a clubhouse leader, but give Myers credit for self-awareness.

He's added more muscle in the offseason, spent time with a sports psychologist, and could be poised for a major bounce back in 2018.

When Myers was asked if he'd consider a position change to accommodate another talented teammate in Hosmer, he didn't hesitate to do what was best for the team. That's understated leadership right there.

Over the past two seasons, the numbers paint both Hosmer and Myers in a similar light. Myers hit 8 more home runs, and has 16 more extra base hits than Hosmer from 2016-2017. He also walked more often.

Hosmer hits for a better average and strikes out less. His glove is more consistent. But the Padres are not making a huge upgrade at first base, at least offensively.

The real benefit of the Hosmer signing should come by adding Myers' bat to the outfield mix, and taking some of the pressure off a laid back young man from North Carolina.

While Hosmer still has the potential for improvement, there's a lingering sense that Myers has yet to tap into his best self. That possibility should be incredibly exciting to Padres fans.

One day, Eric Hosmer may be the "Face of the Franchise" for a World Series champion in San Diego. But if there's a player on the roster who can lift the team on his shoulders, don't look at first base. Look toward the outfield and Wil Myers.