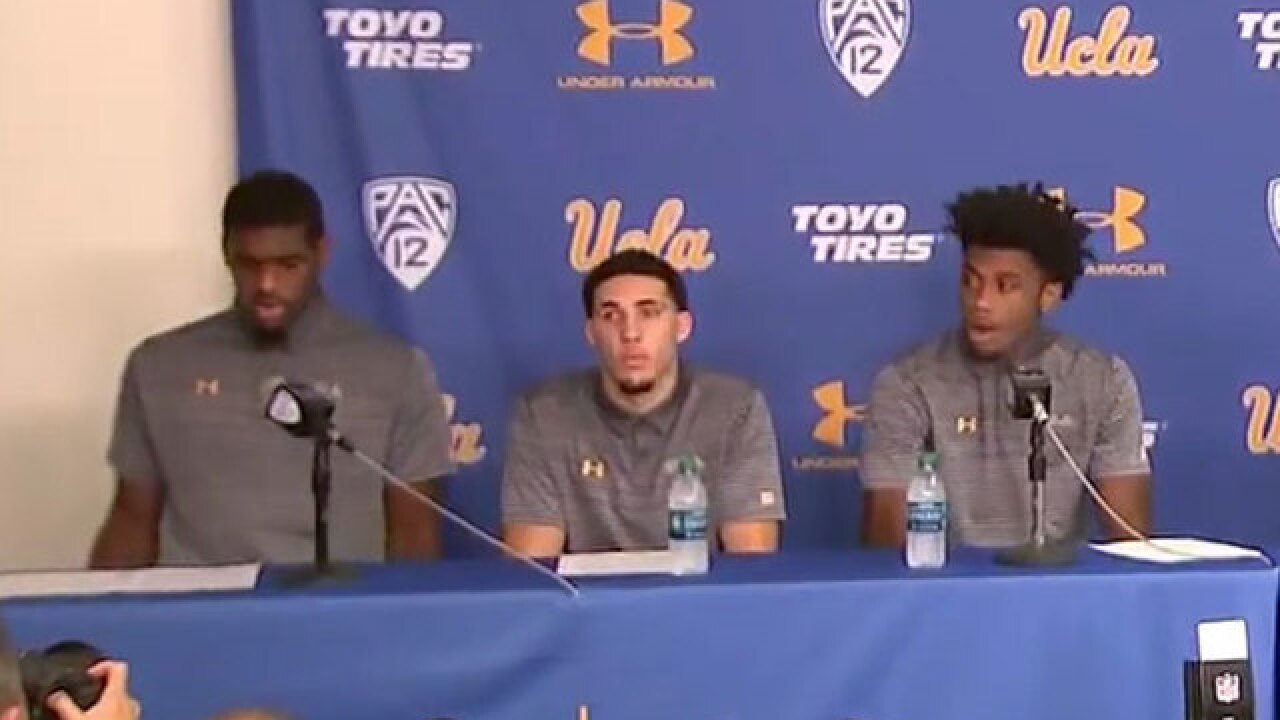 LOS ANGELES (CNS) - Three UCLA freshmen basketball players arrested in China for shoplifting publicly apologized Wednesday and thanked everyone involved in helping to resolve the case so they could return home -- including President Donald Trump.

UCLA head basketball coach Steve Alford said the players -- LiAngelo Ball, Jalen Hill and Cody Riley -- have been suspended indefinitely from the team while they go through the university's disciplinary review process.

"They're going to have to regain the trust of this athletic department, of this university, and because this was such a high-profile international matter, the trust of the general public," Alford said.

During the players' suspension, "they will not travel with the team nor will they suit up for home games. At some point they may be able to join team workouts, practices and meetings, but that timeline has yet to be determined.

"They will have to earn their way back," Alford said. "They will cooperate fully with the university review of this matter and will use this time to focus on their academics."

The three players all apologized for their actions, admitting that they stole items from stores near the team's luxury hotel in Hangzhou. All three individually thanked Trump, who spoke personally to Chinese President Xi Jinping about the players' case.

"Thank you to the U.S. government and President Trump for your efforts," Hill said during a news conference at UCLA's Pauley Pavilion.

Earlier Wednesday, Trump wrote on his Twitter page, "Do you think the three UCLA Basketball Players will say thank you President Trump. They were headed for 10 years in jail!"

UCLA Athletic Director Dan Guerrero noted that White House Chief of Staff John Kelly spoke to the three players on the phone over the weekend.

Ball, Hill and Riley returned to Los Angeles aboard a Delta Air Lines flight from Shanghai around 5 p.m. Tuesday.

They were greeted at Los Angeles International Airport by a throng of media upon their return, but they walked out of the airport without comment and got into a waiting van.

Back on campus Wednesday, the players all admitted shoplifting and apologized.

"I want to start off by saying how embarrassed and ashamed I am for disappointing my family, my teammates, my coaches and the entire UCLA community," Riley said. "I feel terrible and I am sorry to everybody that I've let down. With that being said, I take full responsibility for the mistake I have made -- shoplifting."

LiAngelo Ball, the younger brother of Los Angeles Lakers rookie and former Bruin Lonzo Ball, apologized for "stealing from the stores in China."

"I didn't exercise my best judgment and I was wrong for that," he said. "I apologize to my family my coaches and my teammates and UCLA for letting so many people down. I also apologize to the people of China for causing them so much trouble."

He added, "I would also like everyone to know that this does not define who I am. My family raised me better than that, and I'm going to make myself a better person from here on out."

"There's just no other way to put it," he said. "And I'm not that type of person. I hope that this mistake will not define me as a person, but it shows that I have messed up and can learn from it. I don't want to be known for this dumb mistake. I want to be known for my respectfulness and my love and passion for the game of basketball. This event has changed me in a way I can't explain."

The players were detained Nov. 7, with initial reports indicating they had stolen sunglasses from a Louis Vuitton store next to the team's hotel in Hangzhou.

Guerrero said the trio visited several stores during 90 minutes of free time the team was given the night of Nov. 6, and they stole items from three stores. Chinese police showed up at the hotel the next morning and interviewed members of the UCLA and Georgia Tech basketball teams about the thefts, and they eventually identified the three Bruins as the culprits.

The students were ultimately released on bail on Nov. 8 on $2,200 dollars, but they were forced to surrender their passports, Guerrero said. The university -- not Chinese police -- required them to remain at the hotel in Hangzhou, he said.

The players were not permitted to play in UCLA's season-opening game against Georgia Tech in Shanghai on Friday.

Guerrero said the university footed the bill for legal efforts defending the players, but discussions will likely be conducted with their families to determine who should ultimately be forced to cover the costs.

The criminal charges against them have all been dropped, although all three players admitted their guilt.

UCLA Chancellor Gene Block said Tuesday the players will to through the university's disciplinary process.

"I want to be clear that we take seriously any violations of the law," Block said. "We remain one of the world's top academic institutions in large part because of our values and standards, which we work hard to infuse throughout our campus community.

"When members of the UCLA family fail to uphold these values, we review these incidents with fair and thorough processes," he said.

"In this particular case, both Athletics and the Office of Student Conduct will review this incident and guide any action with respect to the involved students. Such proceedings are confidential, which limits the specific information that can be shared."