San Diego Padres Opening Day 2018: What you need to know

A slew of new foods and technologies are coming to Petco Park this season, making it even more exciting — and delicious — to catch a Padres game this season.

(KGTV) - Spring is here in San Diego, and that means another season of Padres baseball!

The Padres open the 2018 MLB season on Thursday, March 29, against the Milwaukee Brewers. The game is the first in a three-game series at Petco Park, with the team not scheduled to play on Easter Sunday (April 1).

Some of the events prior to the Opening Day matchup include the U.S. Navy “Leap Frogs” Parachute Team presentation; the unfurling of the Holiday Bowl Big Flag, which will be held by Navy Region Southwest sailors; and the ringing of the Ceremonial Bell by Marine Corps Capt. James Henning.

Trevor Hoffman, the former Padres closer who was recently inducted into the Baseball Hall of Fame, is set to throw out the Ceremonial First Pitch.

RELATED: Petco Park is prepped for the Padres home opener

This year’s Opening Day starter for the Padres is veteran lefty Clayton Richard. First pitch is scheduled for 1:10 p.m., and all fans at the game will receive a special Opening Day hat.

As a sellout crowd is expected for the home opener, team officials are urging attending fans to arrive at Petco Park early (suggested time of no later than 12:30 p.m.) and purchase parking ahead of time. All stadium gates will open at 10:30 a.m., which will allow fans to watch the Padres’ batting practice. The visiting team’s batting practice begins at about 11:35 a.m.

Fans will be subject to Petco Park’s standard security procedures, which include walk-through metal detectors. Team officials said: “All fans must be screened as they enter the ballpark. Fans also will continue to have their bags checked by ballpark security staff prior to reaching entry gates and going through metal detectors. Express Entry lines will be available at all main gates for fans without bags and dedicated entrances are available for Season Ticket Members at the Home Plate and Park Blvd. Gates. Additional information, including a list of items that are permitted and prohibited at Petco Park, can be found here.”

Anyone interested in pre-purchasing a parking pass can do so at the San Diego Convention Center or Hilton San Diego Bayfront. Fans can also click here for more parking pass buying options.

The team provided the following information on public transportation or Uber ride-sharing:

Guests without pre-purchased parking passes are encouraged to utilize public transportation or Uber, the preferred ride share partner of the Padres. Uber is providing fans a free first ride (up to $15) by using code: PETCOPARK.

The MTS is increasing trolley service to help fans get to and from Petco Park for Opening Day.

The trolley’s Blue Line, which runs between downtown San Diego and the South Bay, will increase service starting at 11:45 a.m. to every 7 1/2 minutes before and after the game.

The Orange Line will have trolleys running every 15 minutes throughout the day.

Green Line service to and from Mission Valley will increase to every 7 1/2 minutes before the game, with extra trains running after the game as needed.

Fans parking at SDCCU Stadium, which will have 5,000 free parking spots available, can take the Green Line directly to Petco Park.

Passes good for the entire day can be purchased for $5, and MTS urged riders to use its Compass Cloud mobile-ticketing smart phone app to avoid ticket lines and purchase several tickets at one time. 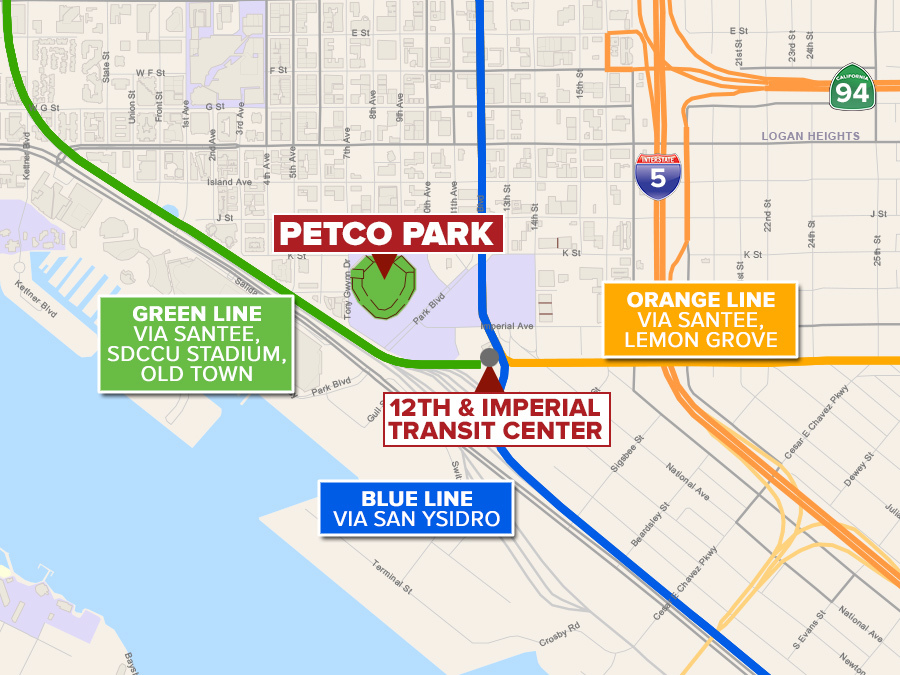 After the game, a northbound Coaster train will leave Santa Fe Depot 60 minutes after the last out. The Amtrak Pacific Surfliner also offers service to Santa Fe Depot and is a proud partner of the Padres in 2018. For more information and updates, visit the Petco Park transportation page here.