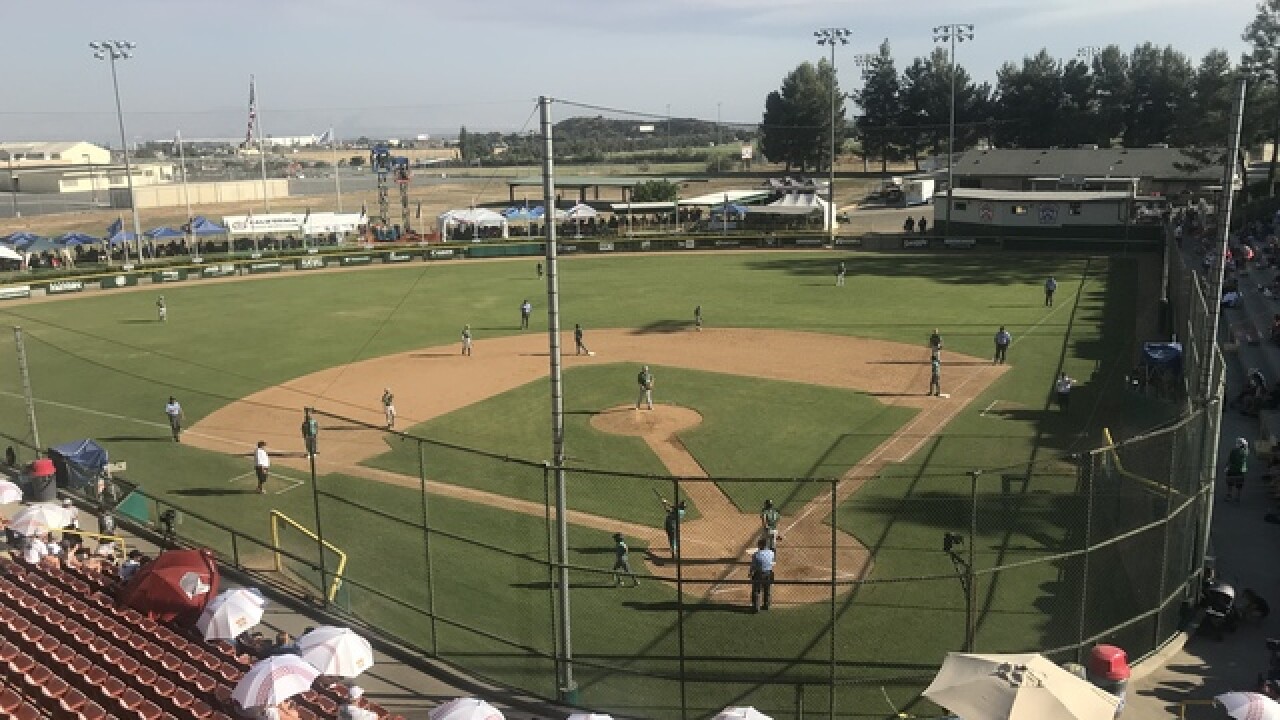 Copyright 2018 Scripps Media, Inc. All rights reserved. This material may not be published, broadcast, rewritten, or redistributed.
<p>Ben Higgins / KGTV</p> 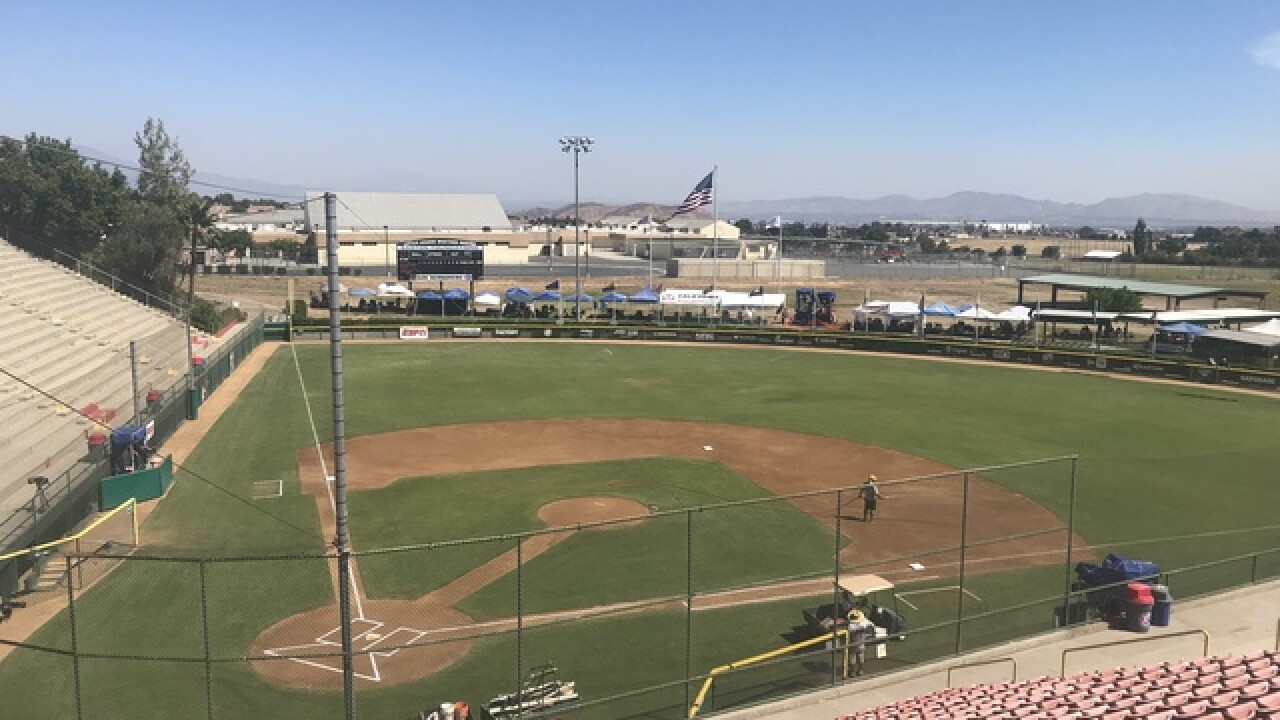 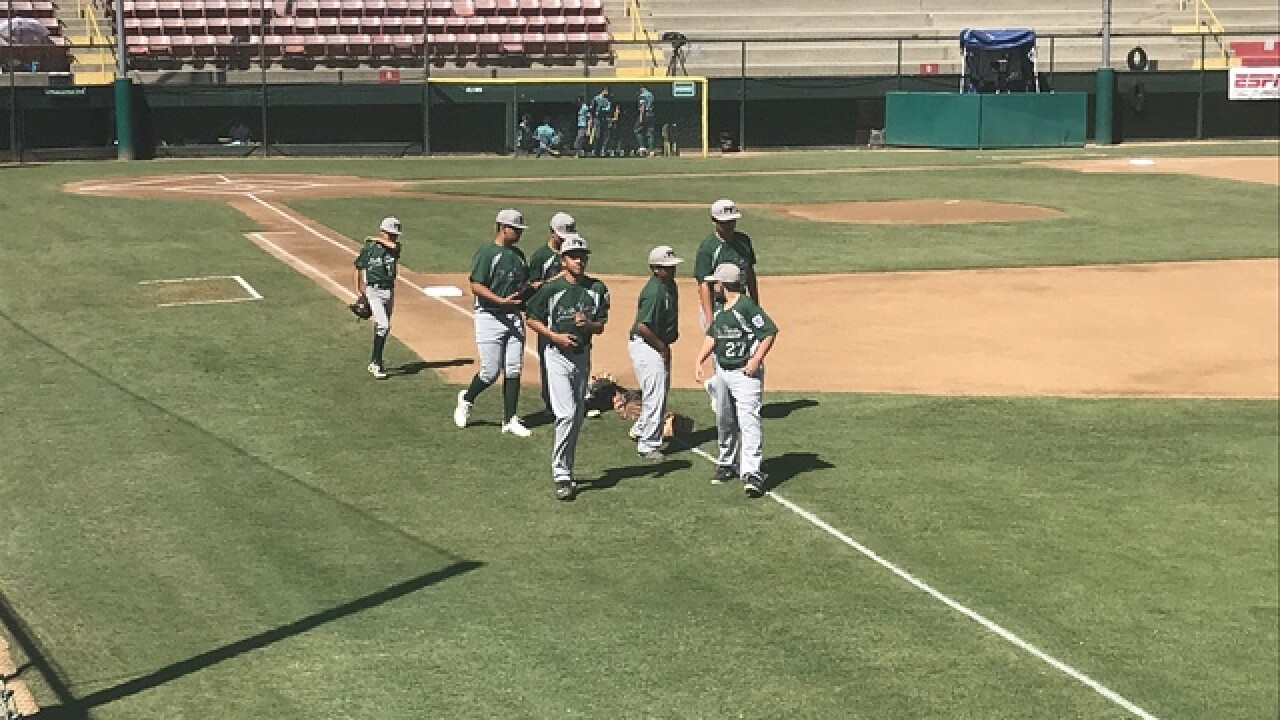 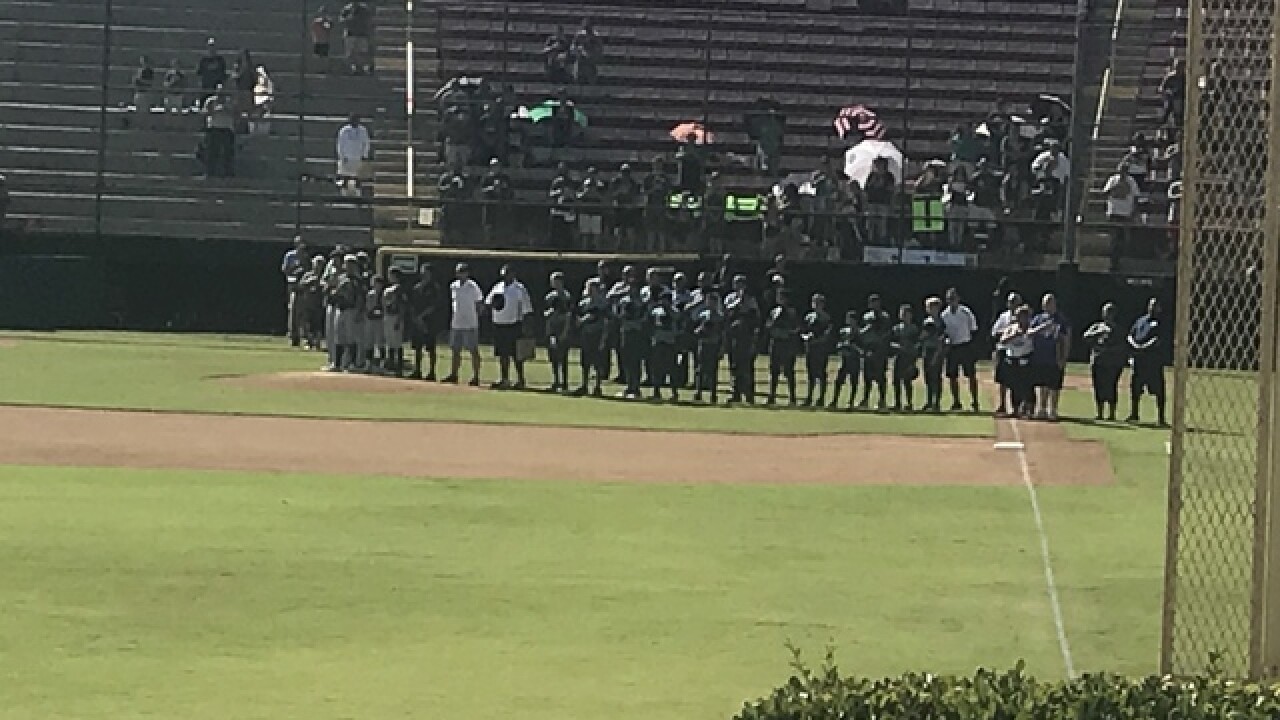 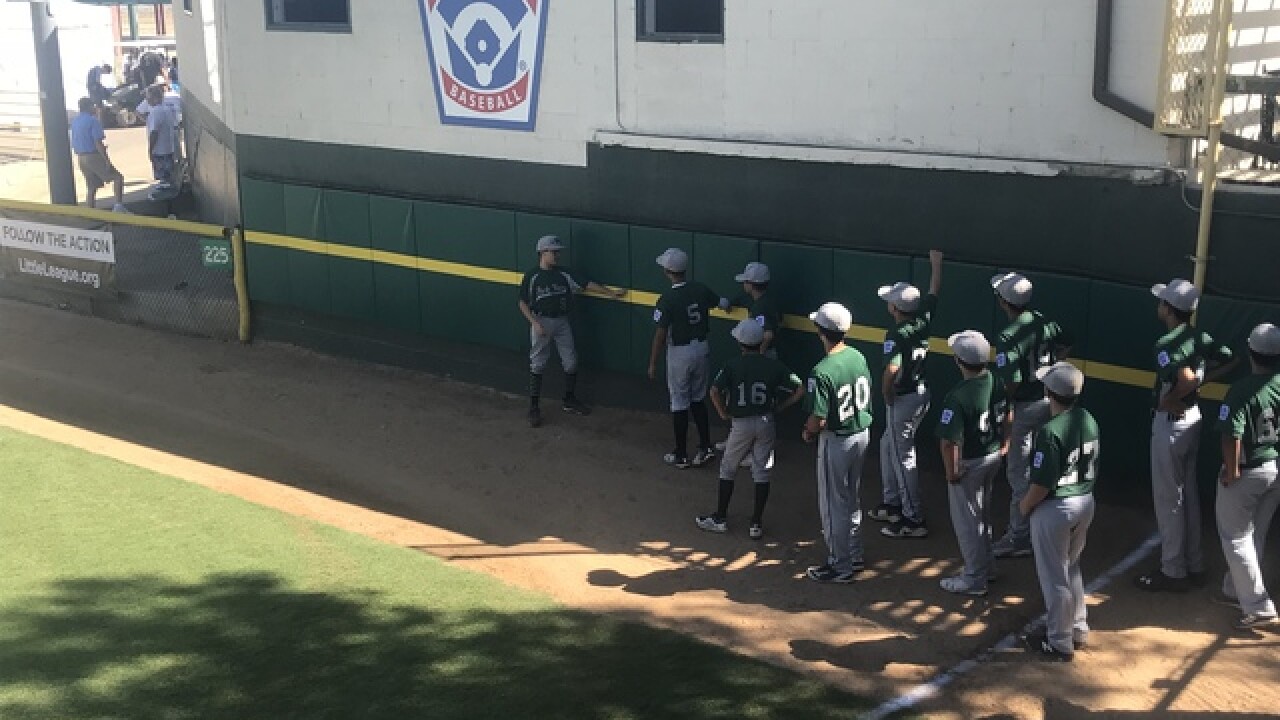 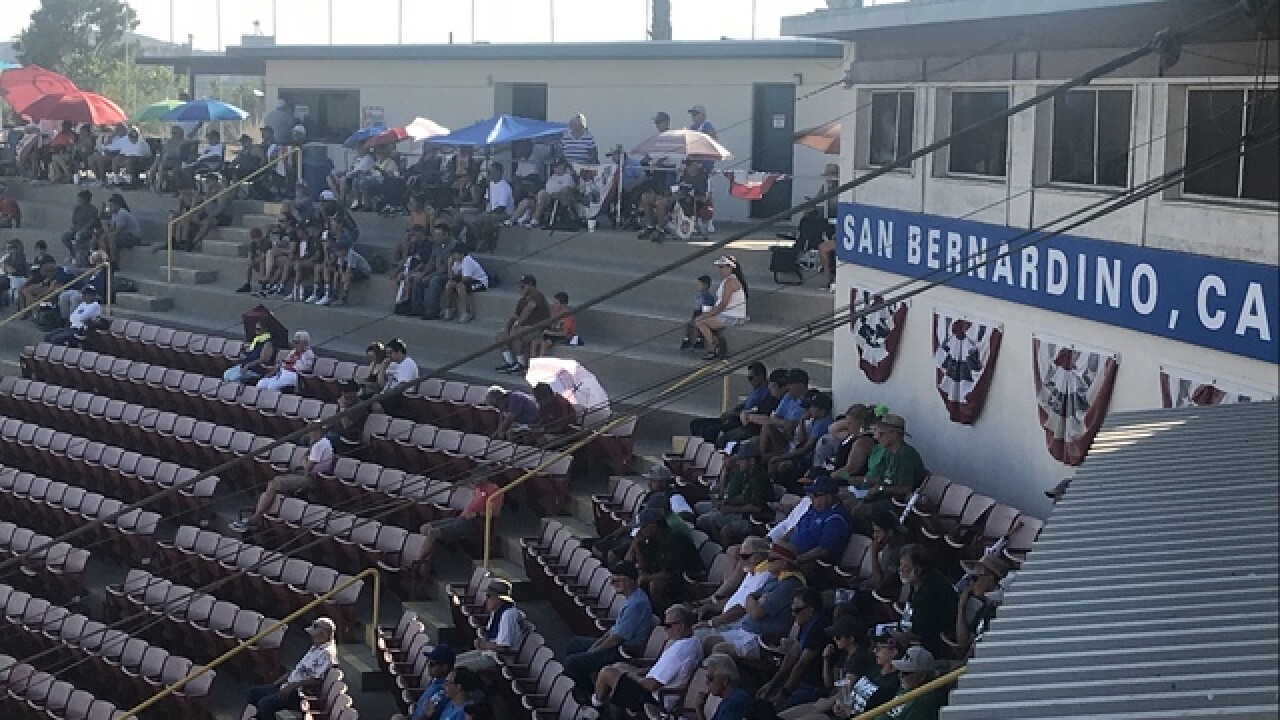 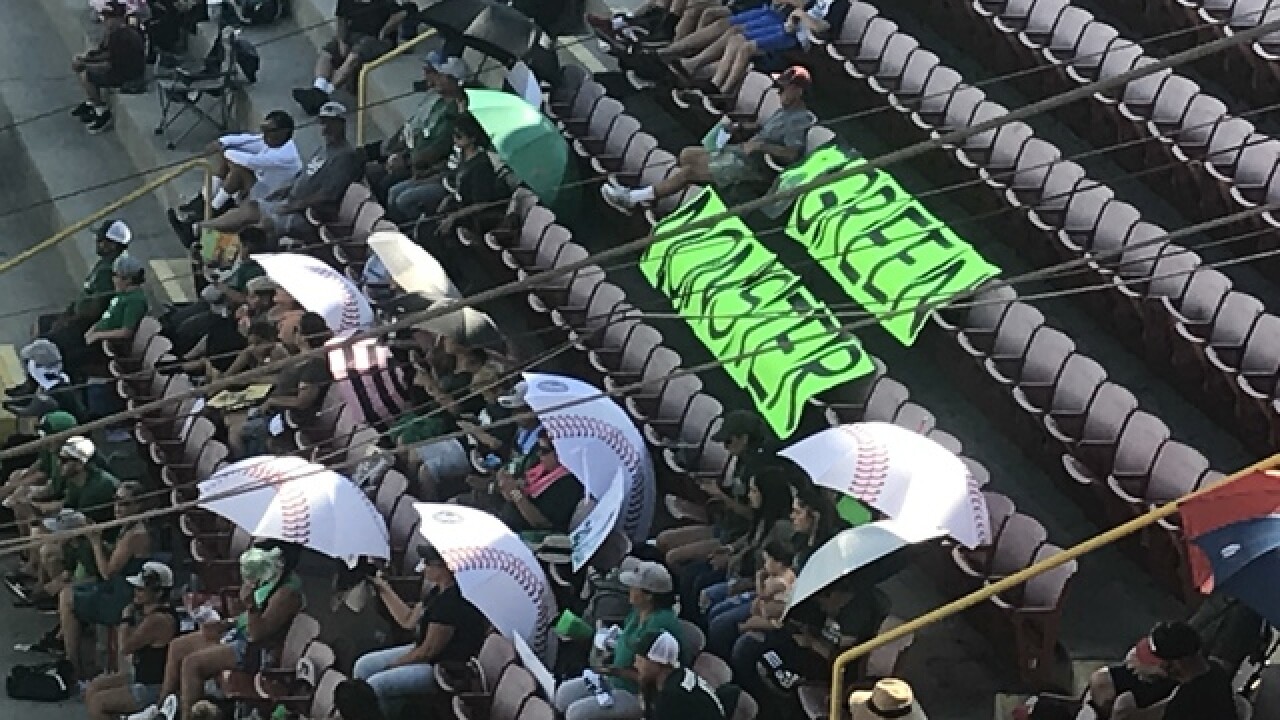 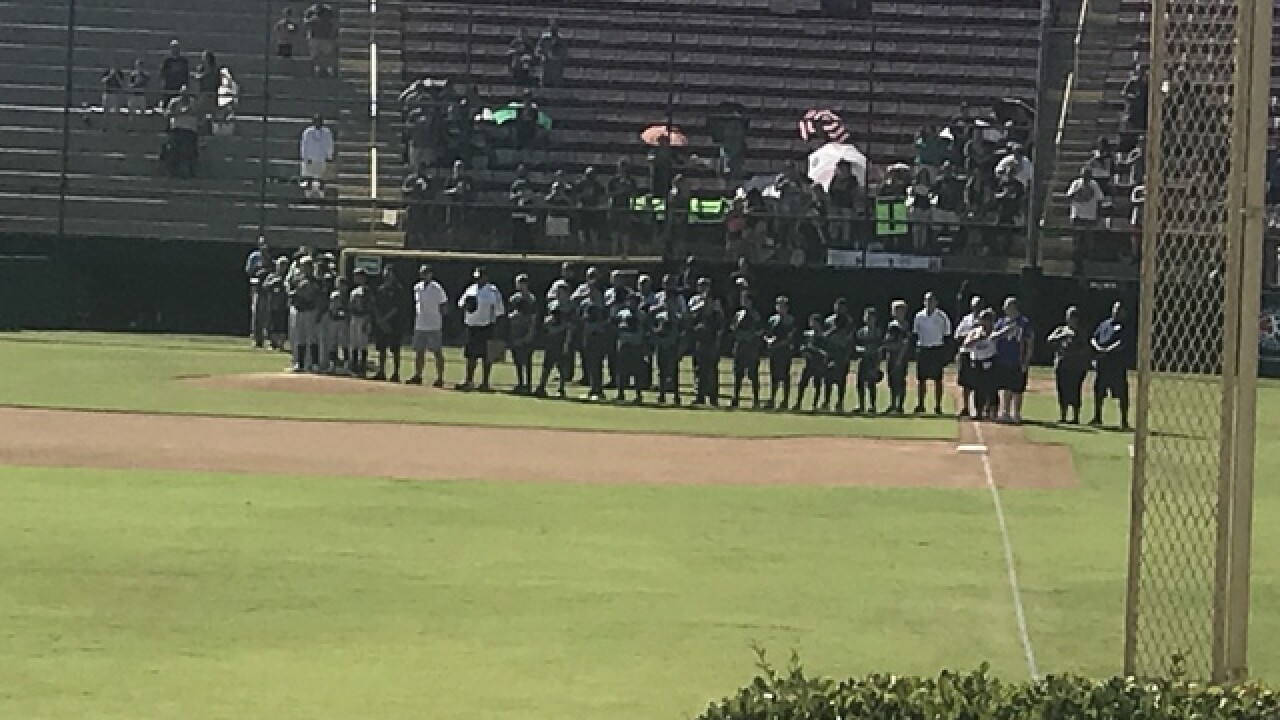 As temperatures soared to 106 degrees during the late afternoon second round match up, SWLL's starting pitcher Kekoa Young maintained a breezy vibe on the mound relying mostly on his 65 mph slider to keep Park View's bats cold.

Young's composure was tested early when he faced Park View's 6-foot, 180-pound slugger Jose Mendoza with two runners on base. Young neutralized the scoring threat by striking out Mendoza on four pitches.

The duo made short order of SWLL's first two batters but it was Young that sparked a two-out rally.

With a runner on first, Young drove a sharp fly towards the glove of PVLL's right fielder Jordan Bleisch who dropped the ball allowing Easton Shelton score the game's first run.

Young scored Nevada's second run of the game on a single by Oliver Makanui.

Back on the mound, Young coasted through the second inning on more finesse pitching stifling Park View's bats by mixing up a 65 mph fastball and a 51 mph changeup, a stark contrast to the 75 mph lasers by Tri-City Little League's pitchers that the Green Monsters dominated on Sunday.

With one out in the top of third, the Green Monsters took advantage of Young who started to struggle with his location.  PVLL's patience at the plate paid off forcing Young to load the bases on three straight walks.

PVLL scored their first run of the game on a wild pitch.  Park View's next batter, Joseph Anderson, hit a bouncing ground ball down the right field line to bring home Rodriguez and Bleisch giving the Southern California champs ending the inning with a 3-2 lead.

The Green Monsters' lead vanished quickly in the bottom half of the inning.

Nevada played polished small ball scattering three consecutive singles to load the bases.  The Silverado West squad brought in a runner on a fielder's choice then scored the remaining runners on a two-RBI single giving them a 5-3 lead heading into the second half of the game.

Connor Apeceche came on in relief in the fourth for Young.  The starter recorded five strikeouts in the game.

Apeceche also stymied Park View's knack to hit the long ball and claw their way back into the game by forcing six consecutive outs.

Facing their first loss in the double-elimination West Regional tournament, Park View put up a fight in the final frame.  With one out, first baseman Connor Alonzo slashed a fly ball single to left.

Matthew Bjornstad, one of Sunday night's stars, stepped into the batter's box representing the game-tying run.  Bjornstad launched a 2-1 fastball deep into right field but it was caught for PVLL's second out.

Nevada struck out the final batter to claim their first win of the tournament.

Young and Apeceche combined to limit Park View to two hits in the game.

Park View will play Tuesday at 11:30 a.m. against Arizona.  The game will be live streamed on ESPN Plus.