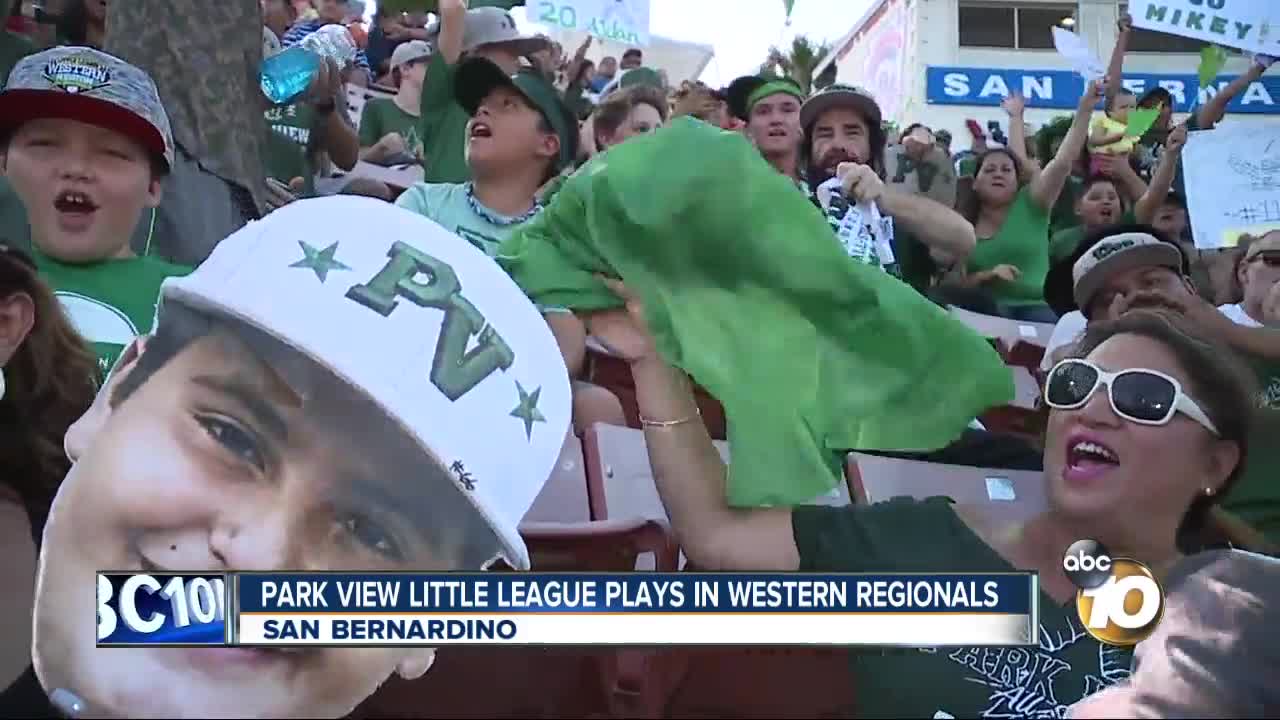 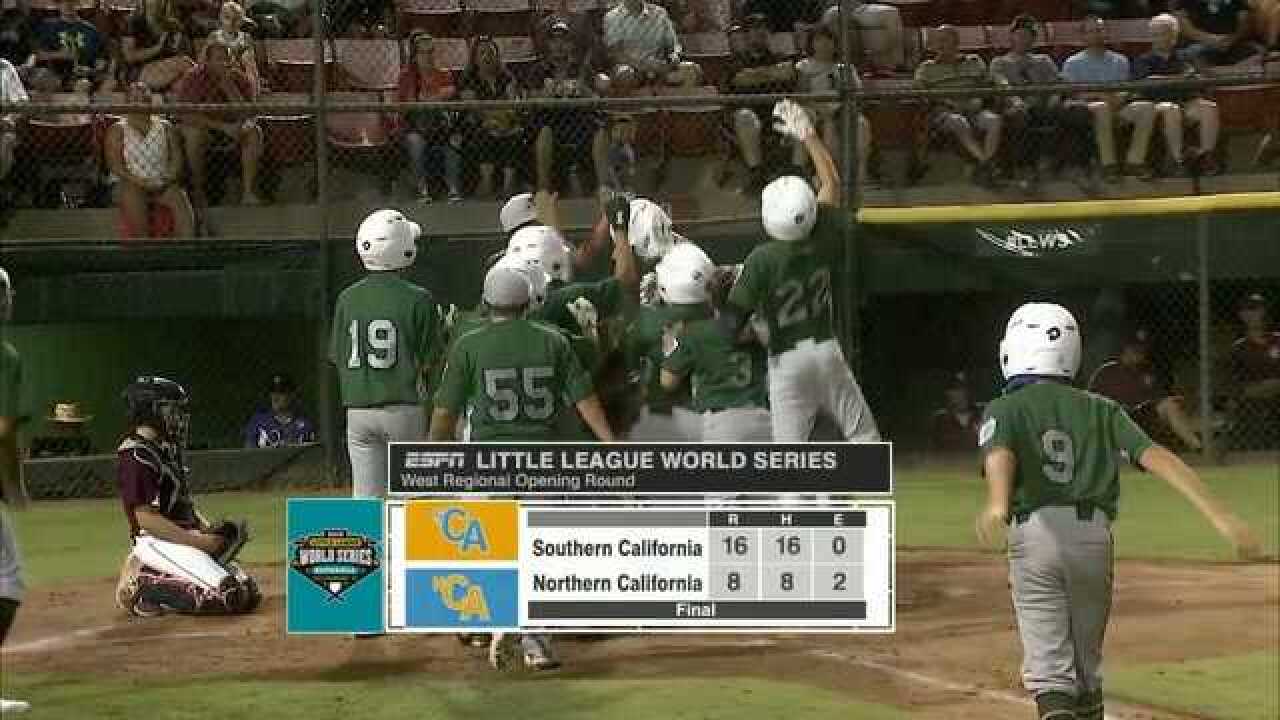 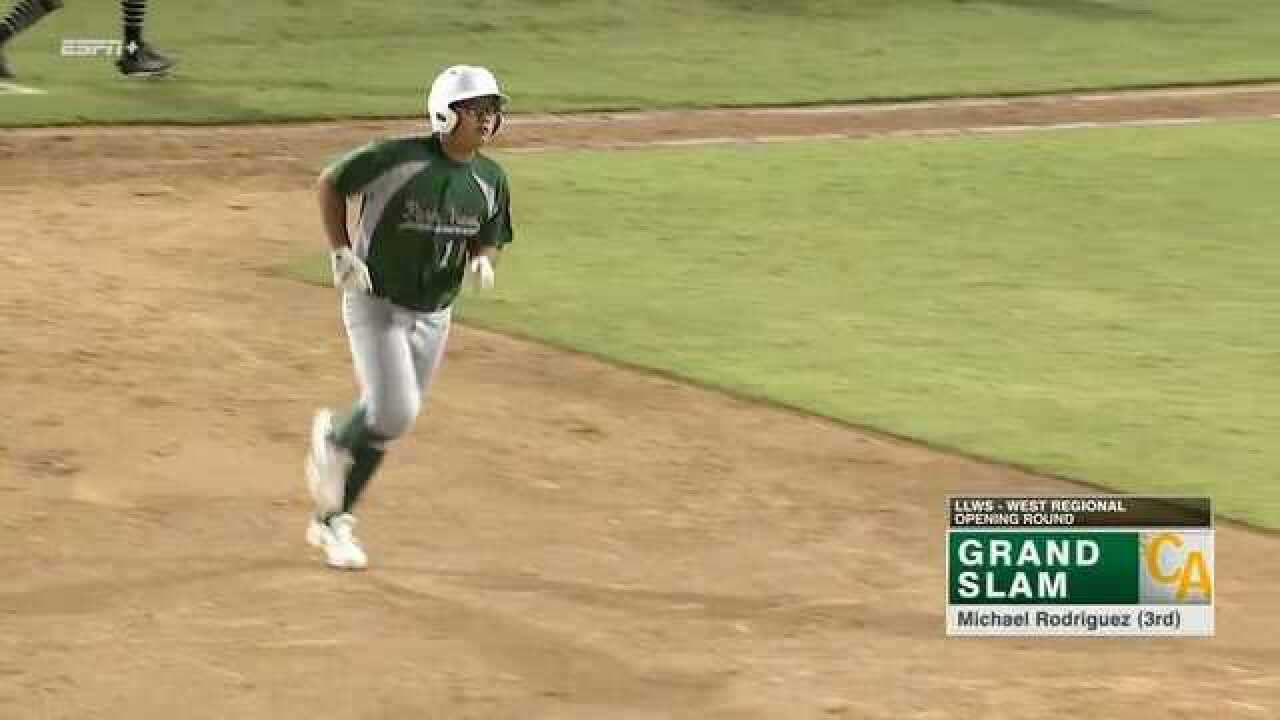 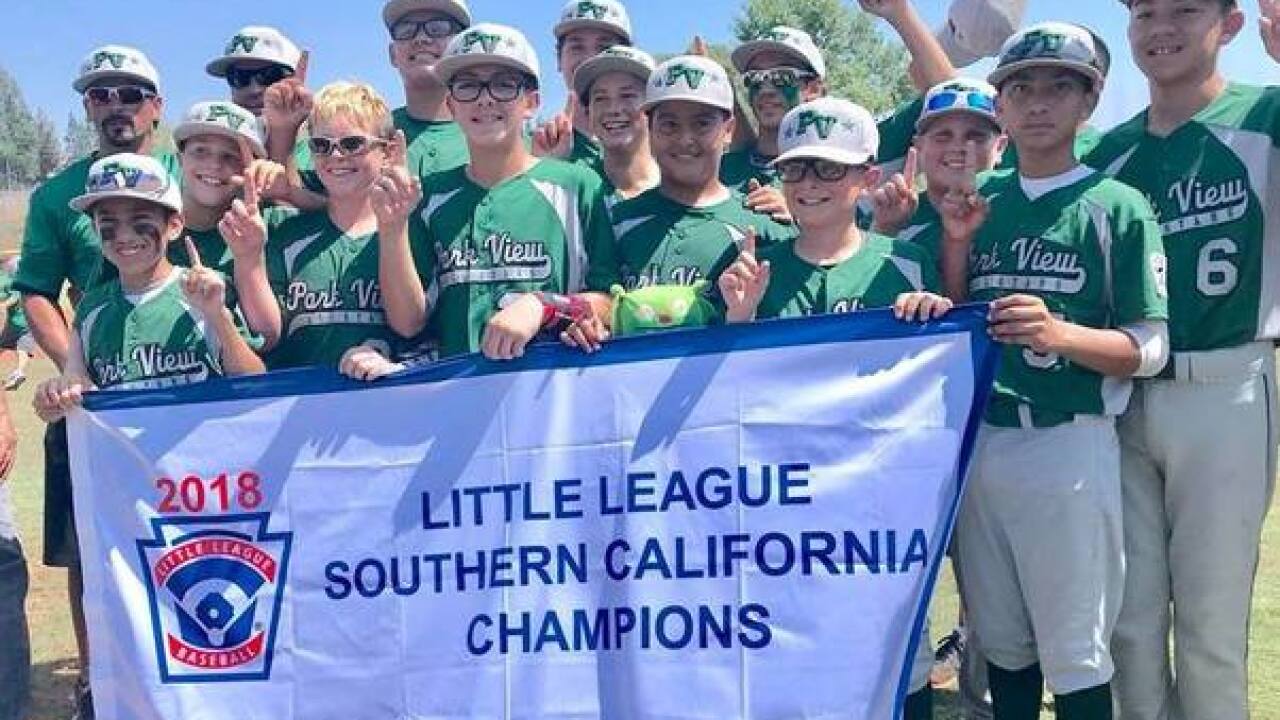 SAN BERNARDINO (KGTV) -- Park View's Green Monsters sprayed the toasty San Bernardino sky with a barrage of home runs on their way to a convincing victory Sunday night in the first round of the Little League West Regional baseball tournament at Houghton Stadium.

The Southern California squad from Chula Vista powered their way to a win with a grand slam and a pair of back-to-back jacks from their two biggest bats in their rout over the Northern California champion Tri-City Little League team out of Rocklin, Calif., 16-8.

The opening round match up saw the Green Monsters fall behind early in the bottom of the first on a long ball when Tri-City's Nathan Erickson cracked a low drive off Kainoa Baptista that hooked over the 225 marker just inside the left field foul pole.

Weissenberg-Frost, whose recent no-hitter helped put TCLL into the West Region tournament, continued his dominance on the mound Sunday night.  The 5-foot-9, 170-pound right-hander relied on his searing 75 mph fastball to record his fourth and fifth strikeouts of the game in the second inning.

According to announcers broadcasting the game on ESPN Plus, Weissenberg-Frost's fastball is equivalent to a mid-90s fastball in the Major Leagues.

The Green Monsters struggled to locate Weissenberg-Frost's heat, but it was on his 40th pitch of the game in the second inning that saw PVLL get on the scoreboard.

PVLL's Atticus Gates lined a 3-1 fastball over second base that got past center fielder Trajan Rogowski allowing Conner Alonzo to score from first base to narrow TCLL's lead, 2-1.

Matthew Bjornstad took the mound for Baptista in the bottom of the second inning and turned in a commanding performance striking out all three TCLL batters he faced on 15 pitches.

With Weissenberg-Frost still throwing 70 mph darts, Michael Rodriguez, a 5-foot-11, 160-pound right-hander, blasted a 1-2 fastball over left-center into a row of tents several feet behind the wall giving PVLL a 3-2 lead.

Weissenberg-Frost's night on the mound may have been finished, but his bat wasn't done.  With two outs in the bottom of the third, the pitcher-slash-power hitter stopped Bjornstad's streak of five consecutive outs with a homer of his own.  Weissenberg-Frost struck a moon shot over the scoreboard in the left field gallery to cut PVLL's lead, 4-3.

PVLL would go on to race around the bases in the top of the fourth led by a second round of back-to-back homers from Rodriguez and Mendoza, giving the SoCal Champs an 8-3 lead.

Northern California got help in the bottom of the 4th inning after Rodriguez, who took over pitching duties, walked in a couple of runs to make the score 9-5. But that's as close as TCLL would come to catching the Green Monsters.

Rodriguez put the game out of reach with a towering grand slam over center field to put PVLL ahead for good.

Park View will advance to play Nevada tomorrow at 4:30 p.m. at Houghton Stadium.  The winner of this tournament will represent the West in the Little League World Series in Williamsport, PA.

Rodriguez wrapped up his night at the plate with three home runs (grand slam, 2HRs) and eight RBIs.  Mendoza finished with two homers and two RBIs.