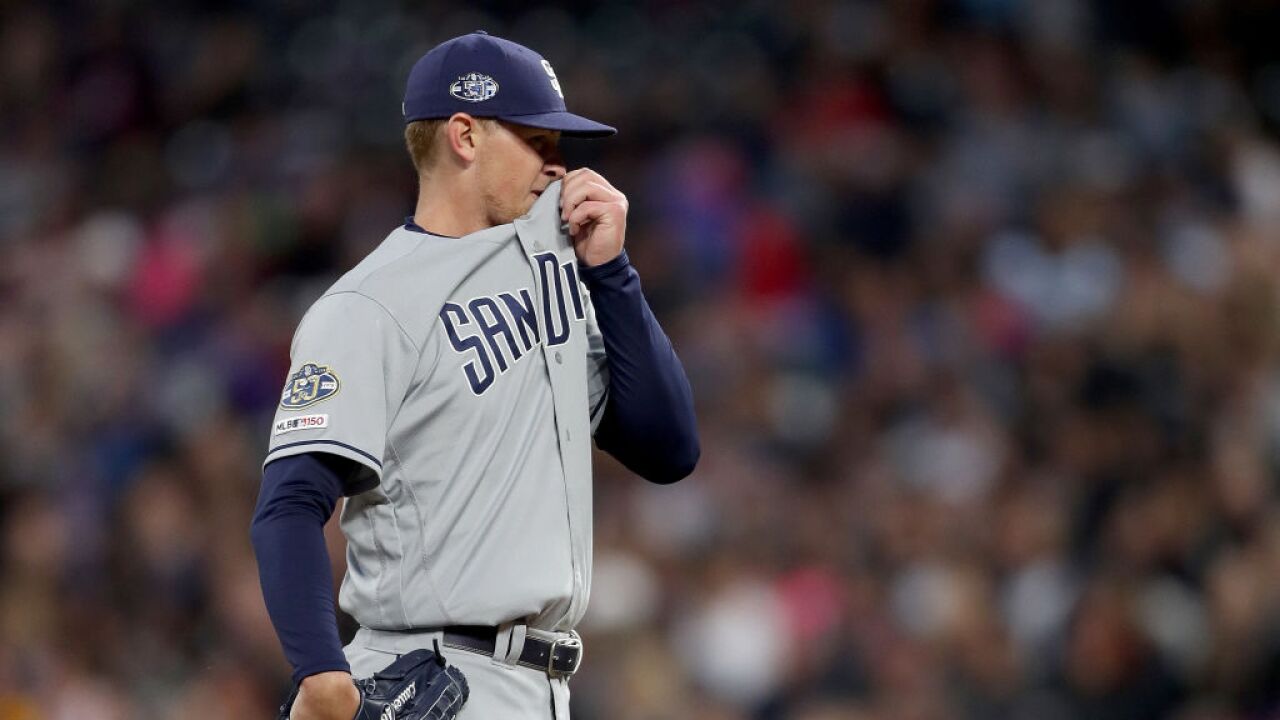 DENVER (AP) — German Marquez got outs when he needed to and helped himself at the plate, too.

Marquez pitched effectively into the sixth inning and had a three-run double in Colorado's seven-run fourth inning as the Rockies beat the San Diego Padres 12-2 on Friday night.

He went 5 2/3 innings and allowed two runs and 10 hits — all singles. He became the fifth pitcher in the team's history to give up 10 or more hits without an extra-base hit when he did it April 19 against Philadelphia and is now the first Rockies pitcher in team history to do it twice.

"I thought he threw the ball well," Colorado manager Bud Black said. "He kept the ball down. He had good command of his fastball and he made critical pitches when he needed to."

Marquez walked none and had seven strikeouts

"Overall the fastball was down today and I felt really good with it," Marquez said through an interpreter. "They did happen to have some good at bats and they got some hits. I think overall you just have to continue to make pitches. You get the job done no matter what."

Trevor Story also homered among his three hits for the Rockies, winners of three of their last four. Nolan Arenado added a two-run triple and Ian Desmond had three hits.

Manny Machado and Ty France each had RBI singles for the Padres and Franmil Reyes had three hits.

Black attributed the frequency of base hits by the Padres to "the old seeing-eye single."

"A couple of ground balls went through," Black added, noting that Marquez kept San Diego in the yard, a team that coming into the game had scored 54.4 percent of its runs off homers. That's the third highest percentage in baseball.

Eric Lauer (2-4) went three-plus innings in his shortest outing of the season and allowed a career-high eight runs and eight hits. It was his first outing at Coors Field since making his major league debut here April 24, 2018, when he also went three innings and allowed seven runs, including a slam to Story.

"Just didn't have great command," Lauer said. "I kind of lost it there in that (big) inning. When you lose command against a team like that, they're going to make you pay."

Story staked Marquez to an early lead when he drove the first pitch he saw from Lauer in Colorado's third inning into the left-field seats. Charlie Blackmon singled ahead of Story's ninth homer of the season.

The Rockies sent 11 batters to the plate in the bottom of the fourth and had their season high for scoring. Tony Wolters' infield single with the bases loaded drove in the first run of the inning. Marquez, awarded a Silver Slugger last season when he led all major league pitchers with a .300 average, doubled to the center-field wall to clear the bases.

"There were two (pitches) that I just barely missed down," Lauer said. "I think obviously he knew I was throwing a fastball and he was ready for it. It wasn't a horrible pitch, but a good hitting pitcher's going to hit it."

Daniel Murphy added a two-run double and Desmond drove in the last run with his second single of the inning.

Marquez allowed three straight singles to start the Padres' fifth, including Machado's run-scoring single. But he came back to strike out the side around France's RBI single.

"Marquez was aggressive," Story said. "He was challenging their guys. He was doing his thing and we got out to an early lead and gave him a little breathing room. It's nice to have one like that."