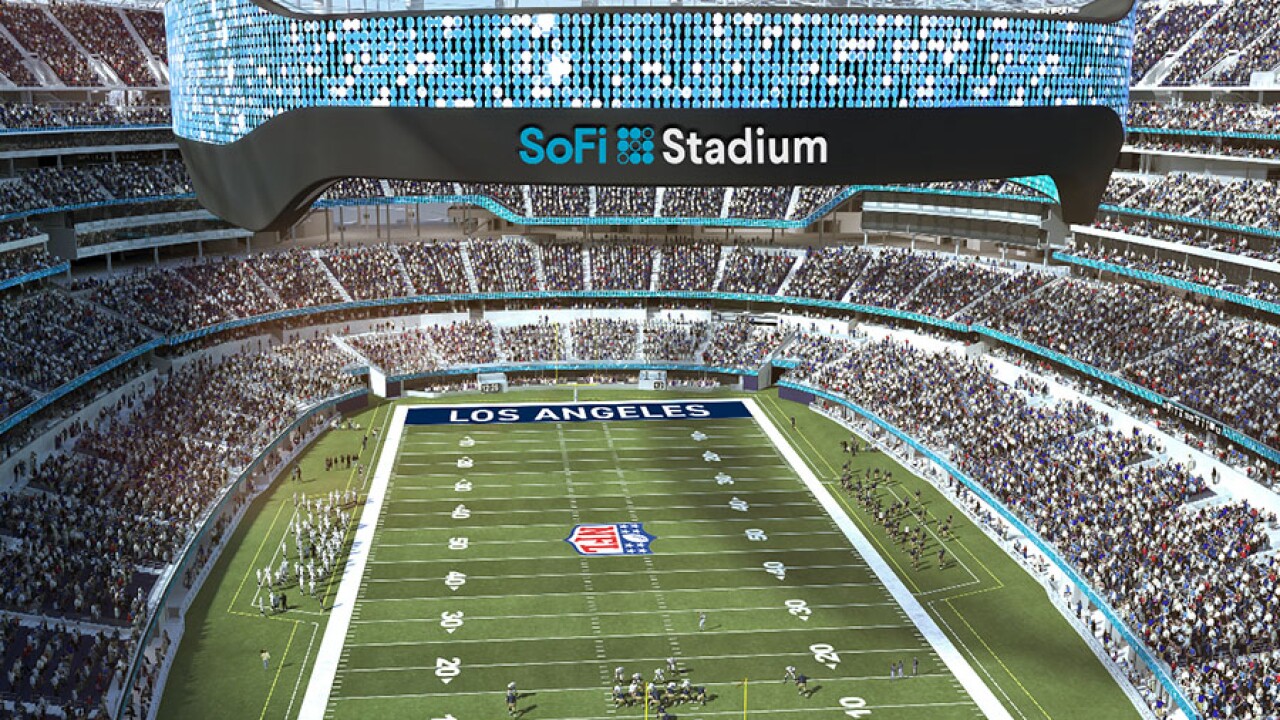 INGLEWOOD, Calif. (CNS) - The digital personal finance company SoFi has won the battle for naming rights to the new football stadium that will house the Los Angeles Rams and Los Angeles Chargers, the parties announced Sunday.

The deal was for 20 years. Financial terms were not divulged.

"We're thrilled to be introducing SoFi Stadium to the world, through our partnership with Hollywood Park," said Anthony Noto, CEO of SoFi. "This is a giant leap toward achieving our company's mission of helping people get their money right by reaching our members where they are."

The new stadium will be the centerpiece of the Hollywood Park project, which has an estimated price tag of about $5 billion. The cost of the stadium itself was originally estimated at about $2.6 billion.

Introducing the world to #SoFiStadium, the new home of the @RamsNFL and @Chargers pic.twitter.com/30VRkpjBU3

The stadium -- located along South Prairie Avenue, between West Manchester Boulevard and West Century Boulevard -- will have a seating capacity of approximately 70,000, expandable up to 100,000, with 260 luxury suites, more than 13,000 premium seats, and over three million square feet of usable space.

The 298-acre overall project will eventually include a performing arts center, hotels, parks, retail shops, restaurants and residences. It's being developed by Rams owner Stan Kroenke.

"It would be impossible to build a stadium and entertainment district of this magnitude without incredible and innovative partners who share our ambitions for Los Angeles, our fans worldwide and the National Football League," Kroenke said. "Since breaking ground at Hollywood Park, more than 12,000 people have worked side-by-side on this project, and we are proud to now have SoFi join us on this journey as we prepare to open in the summer of 2020."

"SoFi's commitment to disrupting the status quo within its own industry and becoming a leading innovator in financial services makes them the ideal naming rights partner for our new home," Chargers President of Business Operations A.G. Spanos said.

Officials said SoFi Stadium will be the largest stadium in the NFL, and the first indoor-outdoor stadium. It will host Super Bowl LVI in 2022, the College Football National Championship Game in 2023, and the Opening and Closing Ceremonies of the Olympic Games in 2028.

Last month, officials announced that American Airlines will have its name affixed to a 2.5-acre entryway plaza leading into the stadium

Officials with American Airlines and the LA Stadium and Entertainment District at Hollywood Park did not reveal financial details, but Bloomberg reported that deal was worth $90 million over 10 years.