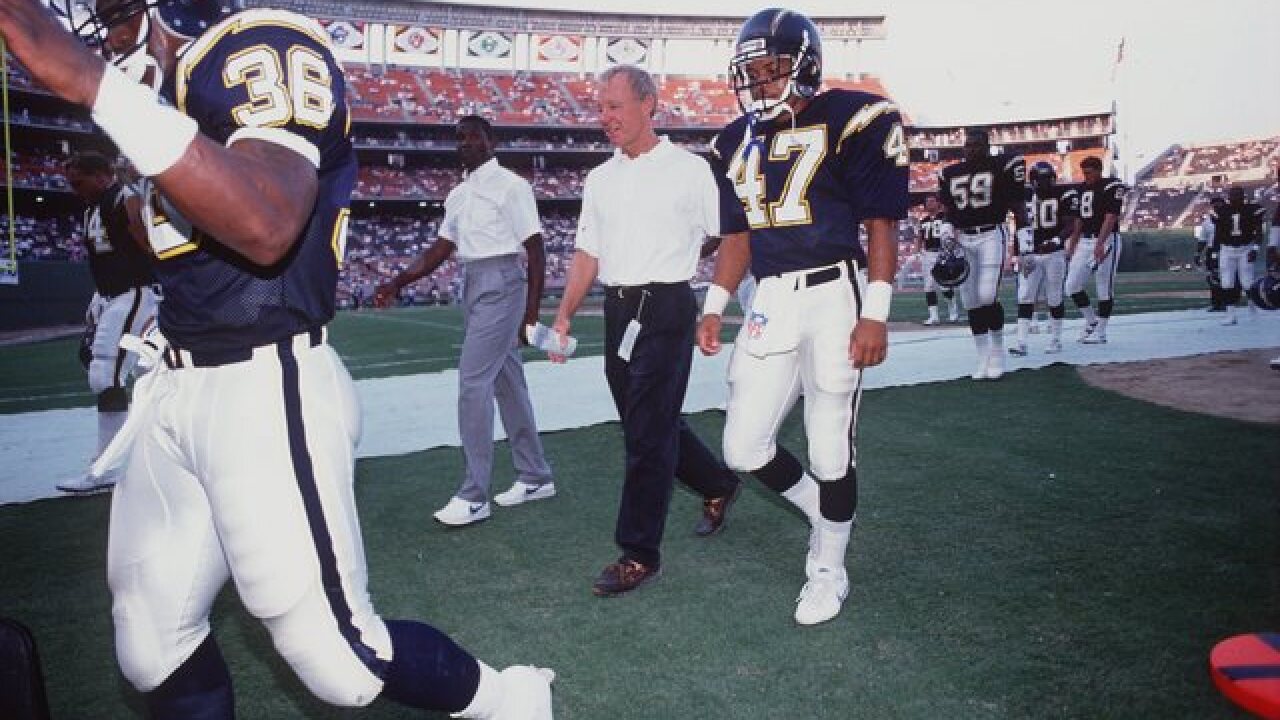 Image copyright 2018 Getty Images. All rights reserved. This material may not be published, broadcast, rewritten, or redistributed.
Stephen Dunn
<p>SAN DIEGO CHARGERS GENERAL MANAGER BOBBY BEATHARD WALKS OFF THE FIELD WITH HIS PLAYERS AFTER A 1990 PRESEASON GAME AT JACK MURPHY STADIUM IN SAN DIEGO, CALIFORNIA.</p>

(KGTV) I've spent four lean decades as a San Diego sports fan. Major sports championships? Not a one. The truly great moments come around only slightly more often than Halley's Comet (which I went to see in the Borrego desert on a grade school class field trip).

So when the architect of one of those great moments is selected for football immortality, it's cause to celebrate.

Bobby Beathard, who put together the lone Super Bowl team in San Diego's NFL history, is headed to the Pro Football Hall of Fame.

Last Saturday, a conclave of football writers in Minnesota confirmed Beathard's Hall-worthy credentials as a contributor to the game.

I had a chance to talk to Beathard about the ultimate career capstone in a conversation on my morning radio show on The Mighty 1090.

"I got to spend my entire working life doing something I loved to do," Beathard told me from his home in Tennessee.

By the time he came to San Diego in 1990, Beathard's Hall of Fame credentials were well-established. After helping build back-to-back Super Bowl champions (and the NFL's only unbeaten team, the 1972 Dolphins) as Player Personnel Director in Miami, Beathard went on to become general manager of the Washington Redskins, where his teams reached the Super Bowl three times, winning twice.

With the Chargers, Beathard embarked on his most difficult challenge, rebuilding the franchise in the post-Don Coryell years. "I felt we could build something out there, and we were able to."

Beathard's very first draft choice with the Bolts -- Junior Seau with the #5 overall pick in 1990 -- jump-started the process.  Within five years, the Chargers were playing in their first -- and only -- Super Bowl in team history.

Still, it might never have happened if not for Beathard's love of surfing and bodysurfing.

"I was back near the ocean, and I love the ocean, so that was a big incentive to get back out (to the West Coast)." Chargers fans are thankful for the waves that lured Beathard to town.

Eventually, a series of bad drafts (including the ill-fated selection of quarterback Ryan Leaf with the #2 pick in 1998) brought Beathard's tenure in San Diego to an end in 2000. It was but a smudge on an otherwise spectacular resume.

I'm glad Bobby Beathard will get to enjoy his enshrinement in the Pro Football Hall of Fame this summer. After all, he knows just about every modern player with a bust in Canton, having scouted them all in college, and signed more than a few over the course of his four decade-long career.

And anyone who can bring an epic sports moment to San Diego is more than deserving of his own gold jacket and bronze bust.