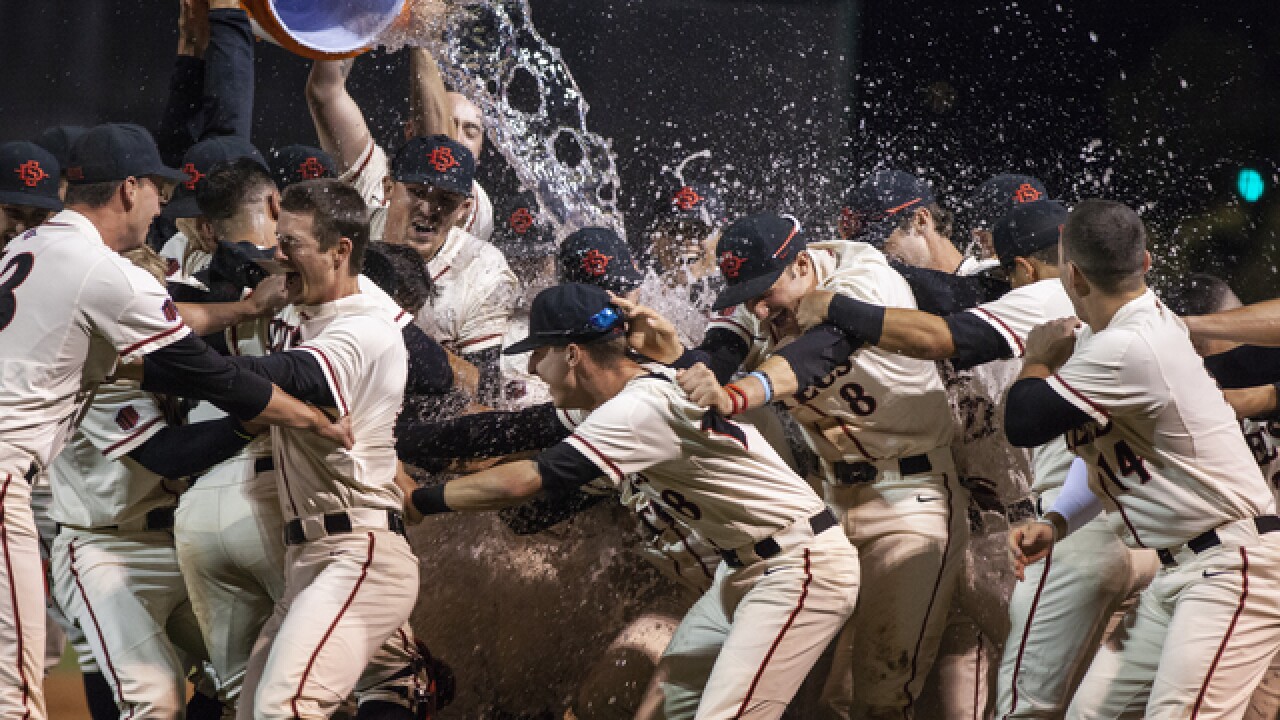 Kelly Smiley
Kelly Smiley
<p>SDSU celebrates on the field following its 14-5 win over UNLV on May 26 at Tony Gwynn Stadium.</p>

Undefeated through two Mountain West Conference tournament games, a loss would have forced SDSU to play a winner-take-all game against University of Nevada, Las Vegas on Sunday.

The Aztecs did not have to wait until tomorrow to celebrate.

SDSU exploded for a five-run sixth inning to pull away from UNLV for the second time in as many nights, securing its fifth MW tournament championship in the past six years and dog piling on the field following a 14-5 victory on Saturday night at Tony Gwynn Stadium.

Senior pitcher Jacob Erickson closed out the game for the Aztecs, and was right in the middle of the celebration on the field after recording the final out.

“My last time playing at Tony Gwynn Stadium, and just to dog pile on the mound with my team, my brothers, I wouldn’t have wanted it any other way,” Erickson said.

The Aztecs held a 6-5 advantage going into the bottom of the sixth inning, before six hits and a crucial passed-ball error by UNLV junior center fielder Kyle Isbel gave SDSU a commanding lead.

The big inning was part of a 18-hit night for SDSU, a tournament-high for the team which included multi-hit efforts from seven different players.

“Winning the first two games loosened our guys up so we managed our at bats better,” head coach Mark Martinez said

“We came with the mentality that winner takes it all tonight and we weren’t going to be a fluke or let them get momentum into tomorrow,” Nevarez said. “We wanted to win tonight for sure.”

The Aztecs will be returning to the NCAA postseason tournament for the fifth straight year, and will look to improve on last year’s performance when they were eliminated by Long Beach State in the Long Beach Regional.