Days away from first day of class, funding for California schools is still uncertain 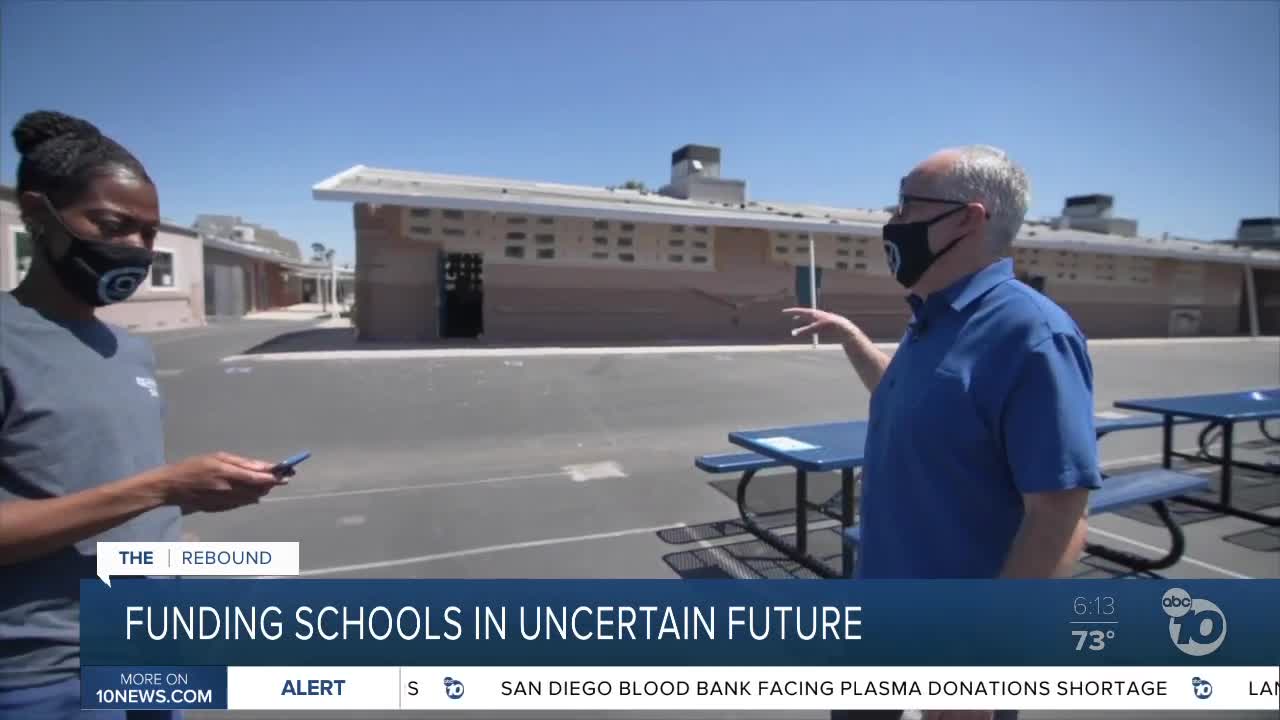 SAN DIEGO (KGTV) -- With just weeks to go before the first day of school, parents across California are trying to figure out the best way to ensure their kids get a quality education.

For some families, that means pulling their kids from a traditional district school.

"We're going to be homeschooling them," said parent Sarah Farsian.

The Farsians have two kids, a first- and second-grader.

"In the pandemic, we are really afraid of sending them back to a campus," Farsian said. "Even though they're disinfected, what if they get sick."

Her family is not the only one across the state making the same decision. Along with setting up their home school, some families are looking into micro-schooling or a small school. It could have regular classroom space or operate out of someone's home, using remote curriculums.

"First, it's going to be just us, but we are a member of a Facebook co-op group that also has accredited tutors, accredited teachers all different grades," Farsian said.

Parents' decisions on where and how to educate their children could have impacts on the schools they leave.

"The overwhelming majority of the money to the overwhelming majority of districts from the LCFF, Local Control Funding Formula, which comes from the state, the dollars come from the state and go to the school districts based on the number of students they've got and also the distribution, the demographics of those students," said Bob Blattner with Blattner and Associates, an education lobbying and consulting firm.

In a May revision to the governor's budget, the Local Control Funding Formula took a significant hit. The proposal states, "Absent additional federal funds, the COVID-19 Recession requires a 10 percent ($6.5 billion) reduction to LCFF."

Lawmakers pushed back and passed a budget that kept school funding at current levels. Schools will get the same amount of state funding as they did this past school year. However, billions of dollars will be deferred, and schools won't be able to get it until the next school year.

"If we don't get federal dollars, the final budget deal starts borrowing from the next year," Blattner said.

"Districts are either going to have to go into their savings, and many have enough, or they're going to have to borrow. If they can't do either, the budget does have a provision giving support for districts that can't access the borrowing tools they need."

"Everybody is going to be subject to deferrals, and what that means basically is you will be reimbursed at a later date," said Myrna Castrejón, president and CEO of the California Charter Schools Association.

Castrejón said in the last recession when they saw a lot of deferrals impacting the charter school sector, many of their school networks had to file for bankruptcy or borrow at commercial interest rates.

"It's creating a particularly precarious perfect storm of fiscal challenge for charter schools when you can't get reimbursed for the students that are coming. You have limited access to borrowing capital to withstand the impact of deferrals," she said.

Castrejón said there is a concern for some school entities when it comes to average daily attendance.

The budget made it so growing schools and schools that have seen enrollment drop still get funded at the same level.

"Which means that for our charter schools that are growing and for district schools also that are experiencing enrollment growth, which is about 30 percent of districts across California, we're not going to be reimbursed for those students that we're serving," she explained.

Castrejón said the governor did ask lawmakers to pursue solutions to fix the issue.

As for Sarah Farsian, she said her kids will go back to a physical school location when they think it's safe.

"This is only for right now," she said. "If they can get this under control, yes (they will go back). They need to be with their friends."