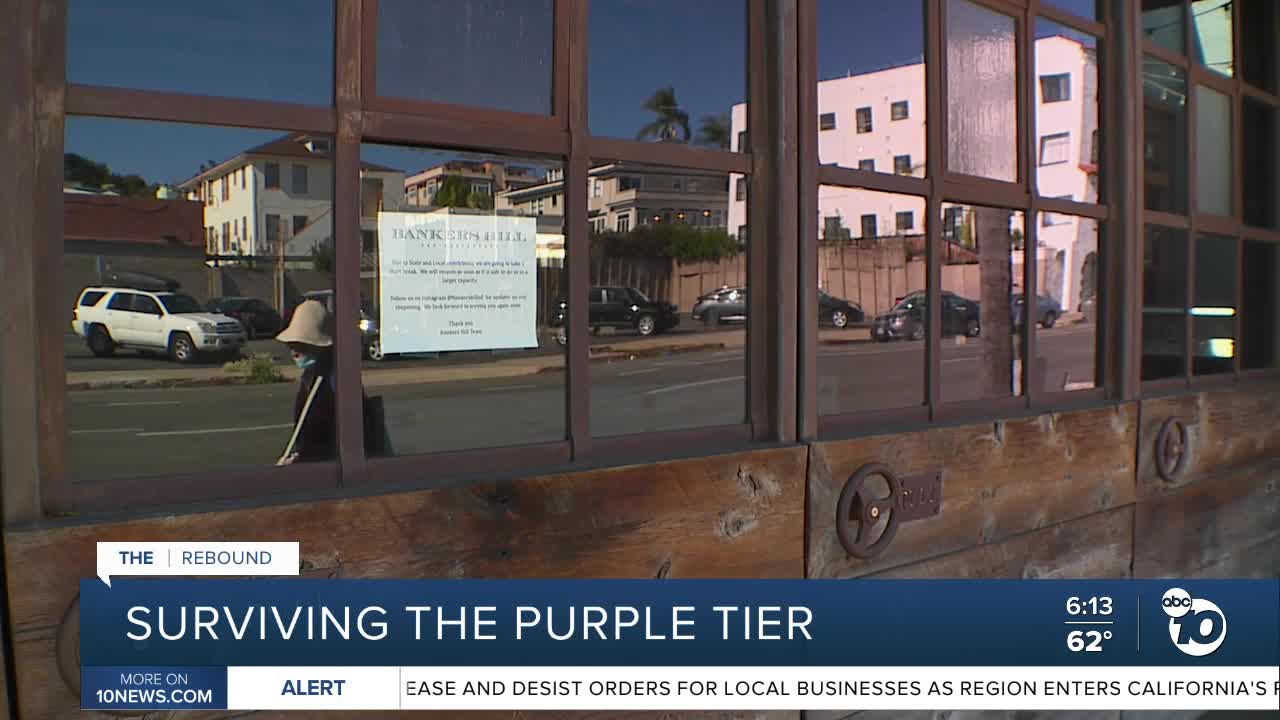 SAN DIEGO (KGTV) — An explosion of COVID-19 cases across California has many businesses once again changing how they operate.

But not by choice. The changes come after most counties find themselves in the state's most restrictive purple tier.

San Diego County's move to the purple tier means back to takeout and outdoor only dining.

Gavre's other spot, Bankers Hill Bar and Restaurant, is in what she describes as a hibernation period. Hunkering down and trying not to lose money.

Those business decisions come with a cost.

"If we stay open, every month you watch the savings account go down, down, down," Gavre said. "We had 15 employees here pre-COVID we're now down to 5. So 10 of my staff members have been laid off. At Bankers Hill Bar and Restaurant, we had 40 people on staff."

This week, 28 other California counties across the states moved back into the purple tier.

"My first thought was that's very frustrating. My second thought was immediately what I've been doing for the last eight months which is lying in bed awake thinking how are we going to pull this off," said Ryan Joiner, who owns Athlon Fitness & Performance in San Luis Obispo.

While some businesses have spent the last nine months treading water, the most recent frustration comes with the governor's Monday press conference and changes to the tier system, allowing counties to move back a tier after one week, not two.

It drastically changed the makeup of the state and how many businesses across the state can operate.

"Counties can move back after one week, not just two weeks," Gov. Gavin Newsom said, describing the state hitting the emergency brake. "I'll go back so you can get a sense of where we were just a week ago and now again the purple throughout the state of California."

"It's really frustrating for a lot of people and ya it does seem like he's moving toward a backdoor shut down order again," James Gallagher is a state assembly member in Northern California.

Gallagher says the governor keeps changing the rules just as people are finding their footing from the last set of guidelines.

"I just think that this approach is the wrong one," Gallagher said.

Gavre says the tighter the restrictions get and the longer they go on the harder for small businesses to keep going.

"A lot of people out of work right now going into the holidays and I don't know what they are going to do," Gavre said.

The state has said the spread of COVID-19, if left unchecked, could quickly overwhelm our health care system and lead to catastrophic outcomes.