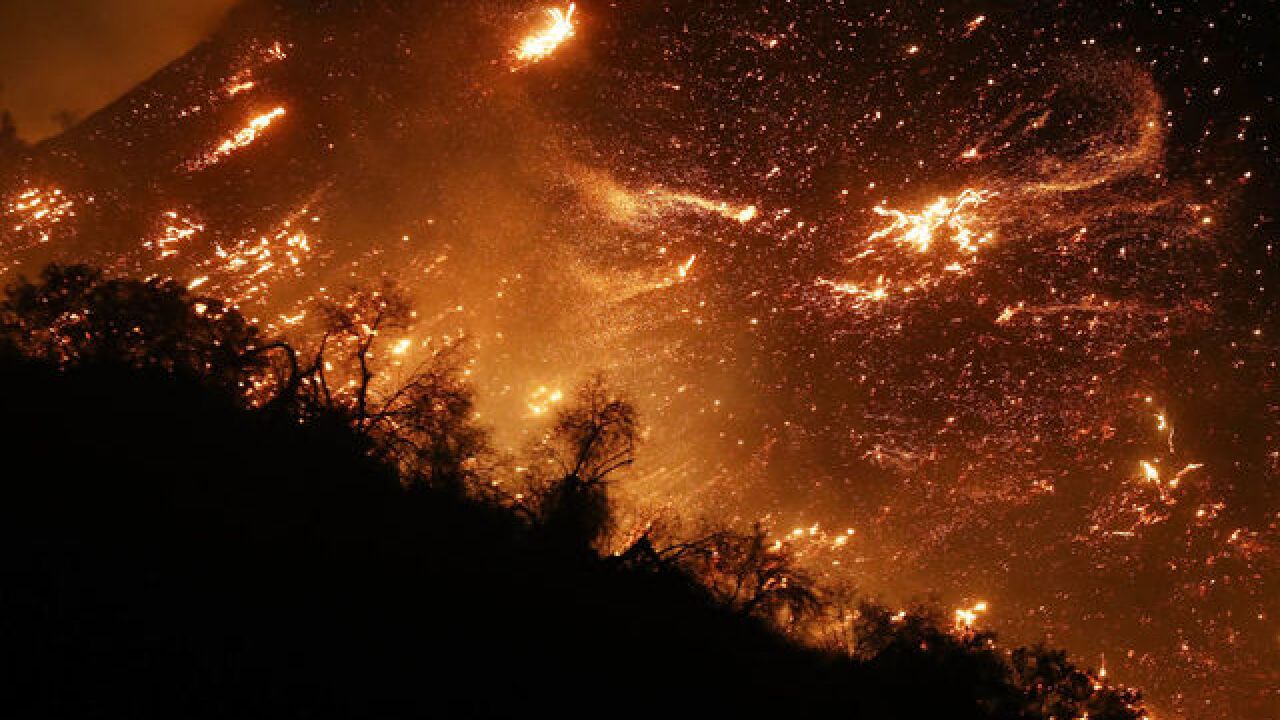 SACRAMENTO (AP) — California on Thursday temporarily banned insurance companies from dropping customers in areas affected by more than a dozen recent blazes, invoking a new law for the first time as homeowners in the wildfire-plagued state struggle to find coverage while carriers seek to shed risk.

The order from Insurance Commissioner Ricardo Lara will last for one year, and it only covers people who live inside or next to the perimeter of 16 different wildfires that burned across the state in October. The Department of Insurance estimates the moratorium will affect 800,000 policies covering millions of people in portions of Los Angeles and Riverside counties in Southern California and Sonoma County in the northern part of the state.

The move comes as regulators are aggressively trying to assist homeowners in wildfire-prone areas who say they are being pushed out of the commercial insurance market as climate change makes fires larger and more frequent.

RELATED: Cal Fire: Acres burned across the state is much lower in 2019 than 2018

Seven of the 10 most destructive wildfires in California history have happened in the last five years — including 2018′s Camp Fire, which destroyed roughly 19,000 buildings and killed 85 people in and around the Northern California town of Paradise. That blaze alone generated more than $12 billion in insurance claims, according to the Department of Insurance.

Since 2015, state officials say insurance companies have declined to renew nearly 350,000 policies in areas at high risk for wildfires. That data does not include information on how many people were able to find coverage elsewhere or at what price.

One of those homeowners is Sean Coffey, who said he and his wife have struggled to maintain fire insurance on their home in Oakland.

“The pattern repeated itself almost every year since we bought our house. We would have (coverage) for 10 months. In the fall, we would get a notice we are being dropped,” he said.

Coffey now buys fire insurance from the California Fair Access to Insurance Requirements Plan, an insurance pool mandated by state law that is required to sell policies to people who can’t buy them through no fault of their own. He must purchase a second policy to cover risks other than fire.

FAIR Plan policies in wildfire-prone areas have grown an average of 8% each year since 2016, according to the Department of Insurance. Last month, Lara ordered the FAIR Plan to begin selling comprehensive policies next year that cover more than just fire damage. FAIR Plan Association President Anneliese Jivan called that order “a misguided approach,” saying it will make all of the plans more expensive.

Lara has the authority to order the moratorium under a bill he authored while in the state Senate last year that was signed into law by former Gov. Jerry Brown. The law took effect in January, and this is the first time regulators have used it.

In addition to ordering the moratorium, Lara called on insurance companies to voluntarily stop dropping customers solely because of wildfire risk.

RELATED: Bigger, longer blackouts could lie ahead in California

“I believe everyone in the state deserves this same breathing room,” Lara said.

A spokeswoman for the American Property Casualty Insurance Association did not immediately respond to a request for comment.

While state officials rush to assist homeowners, a new report from California Auditor Elaine Howle said the state did not do enough to protect non-English speaking, elderly and other vulnerable residents during three of the state’s most devastating fires in recent years.

The audit covered Butte County, site of 2018′s Camp fire, plus the 2017 Thomas Fire that burned more than 281,000 acres in Ventura County and 2017 fires in Sonoma County that killed 24 people. The audit found none of the three counties had assessed its residents to determine who might need extra help and whether resources were available to help such people, such as transportation, during a natural disaster.

The audit also scolds the state oversight agency, the Governor’s Office of Emergency Services, for failing to assist counties in developing such plans and reviewing any plans in place.

Howle says it was impossible to determine whether lives could have been saved “if the counties had planned differently or more fully implemented the best practices”her office recommends in the report.” But she noted that “inadequate plans and insufficient planning are proven contributors to failure.”