West coast's Mars-bound rocket launch may be blanketed in fog

Copyright 2018 Scripps Media, Inc. All rights reserved. This material may not be published, broadcast, rewritten, or redistributed.
Credit: NASA

Saturday's launch window could be blanketed behind a thick layer of morning fog, according to meteorologists. Vandenberg Air Force Base is forecasted to see partly cloudy skies through the morning hours.

The fog, however, may not be enough to scrap the launch. InSight's launch director Tim Dunn said during a briefing Thursday that, "We got 'go's' from all aspects, all organizations that have a vested interest in launching InSight," Space.com reported.

RELATED: Mars-bound NASA launch will be seen from San Diego

The launch is currently scheduled for Vandenberg between 4:05 a.m. and 6:05 a.m. NASA has given a six-month time window to set InSight for Mars.

Regardless of fog, officials have given the all-clear for NASA's first interplanetary launch on the west coast.

But that shouldn't deter San Diegans from trying to catch a glimpse — even if just a blurry bright light in the distance. Locals need only gaze westward to catch the rocket's path south along our coast. 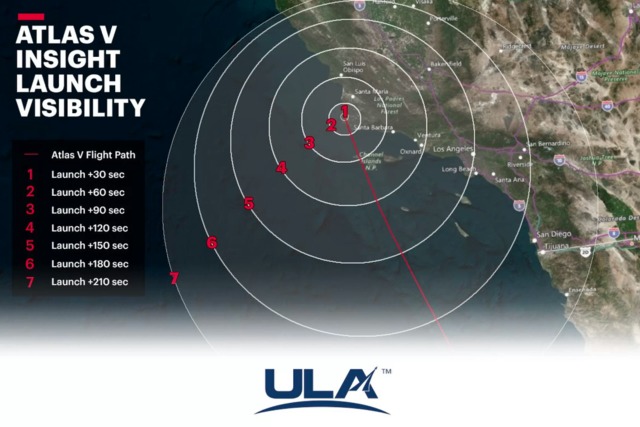 "If you live on the California Central Coast or south to L.A. and San Diego, be sure to get up early on May 5th, because Atlas V is the gold standard in launch vehicles and it can put on a great show," Dunn said.

Insight will launch atop an Atlas V rocket, one of the biggest available to make the 301-million mile voyage. The two-year journey will see the rocket's lander arrive on Mars on Nov. 26, 2018.

There, the rover and two satellites will survey the Red Planet's terrain to learn how the planet was formed, seismic activity, and the effects of meteorites.