Thomas Fire in Ventura County continues to burn out of control

(KGTV) - A massive fire continues to burn in Ventura County Tuesday, destroying 150 structures and forcing tens of thousands of residents to flee from their homes.

The so-called Thomas Fire erupted at about 6 p.m. Monday in the Santa Paula area. Aided by strong and dry Santa Ana winds, the blaze burned 10,000 acres by 11 p.m.

Crews were unable to use air drops on the fire because it was night and the strong wind conditions. Authorities said they would fight the fire by air at first light Tuesday.

Most up to date fire perimeter map of the #ThomasFire posted during the a.m. operational briefing happening now! @VCFD #VCFD pic.twitter.com/0lxxgvctX4

Authorities said 27,000 people were told to leave the area under a mandatory evacuation order, with law enforcement officers going door-to-door in some neighborhoods to spread the word.

RELATED: What you need if you're forced to evacuate 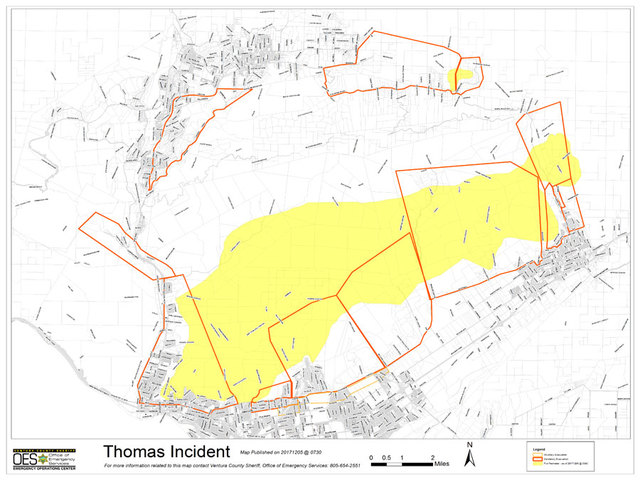 Evacuation information and road closures are being updated on the ReadyVenturaCounty website.

The fire also took down power lines, causing power outages that left tens of thousands of customers in Ventura and Santa Barbara counties without service, according to utility company Southern California Edison.

RELATED: How to prepare defensible space around your home

CNN reported state Route 150, between Ojai and Santa Paula, was closed due to the fires.

Residents trying to leave the area were caught in several traffic jams.

While no injuries were immediately reported, one person was killed in a vehicle crash while trying to evacuate, authorities said.