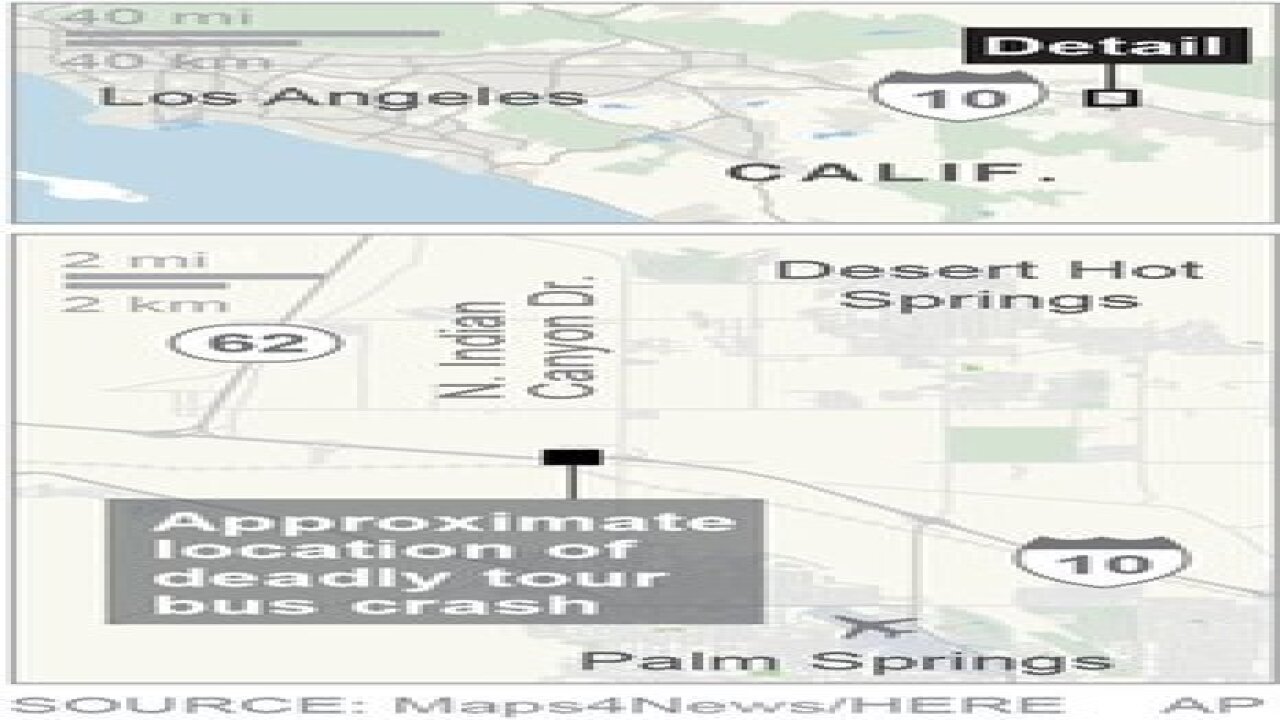 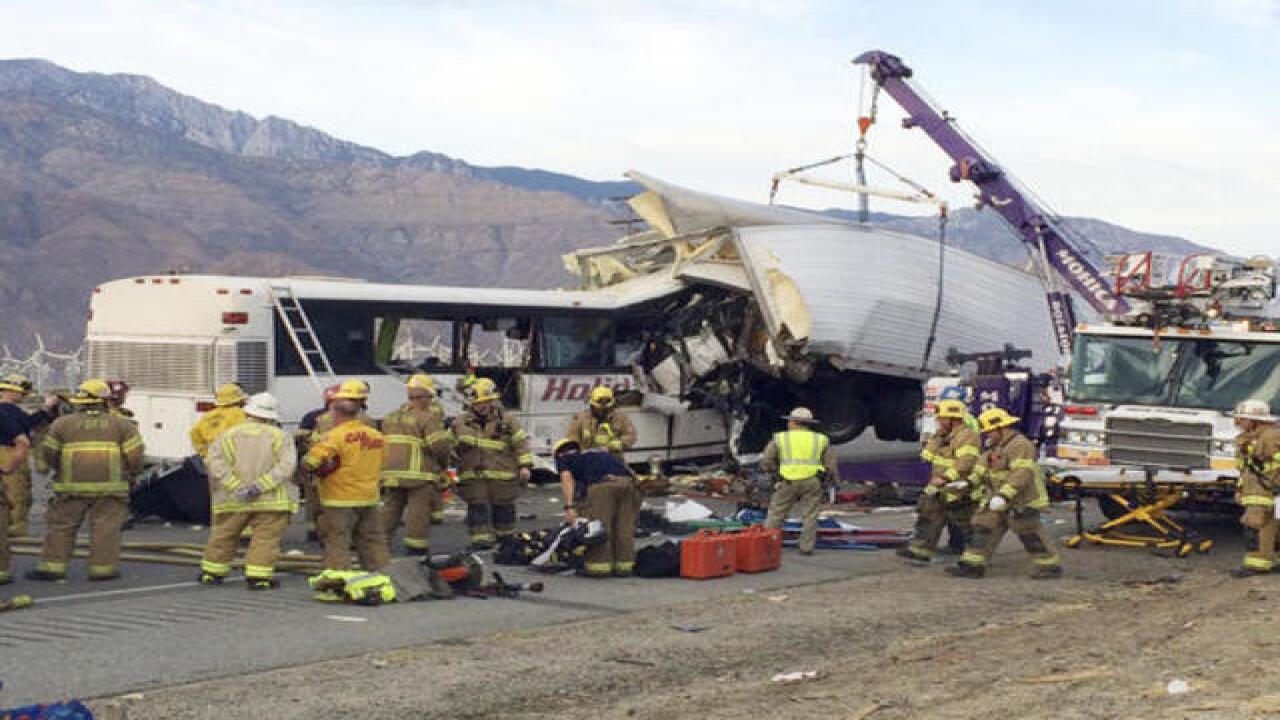 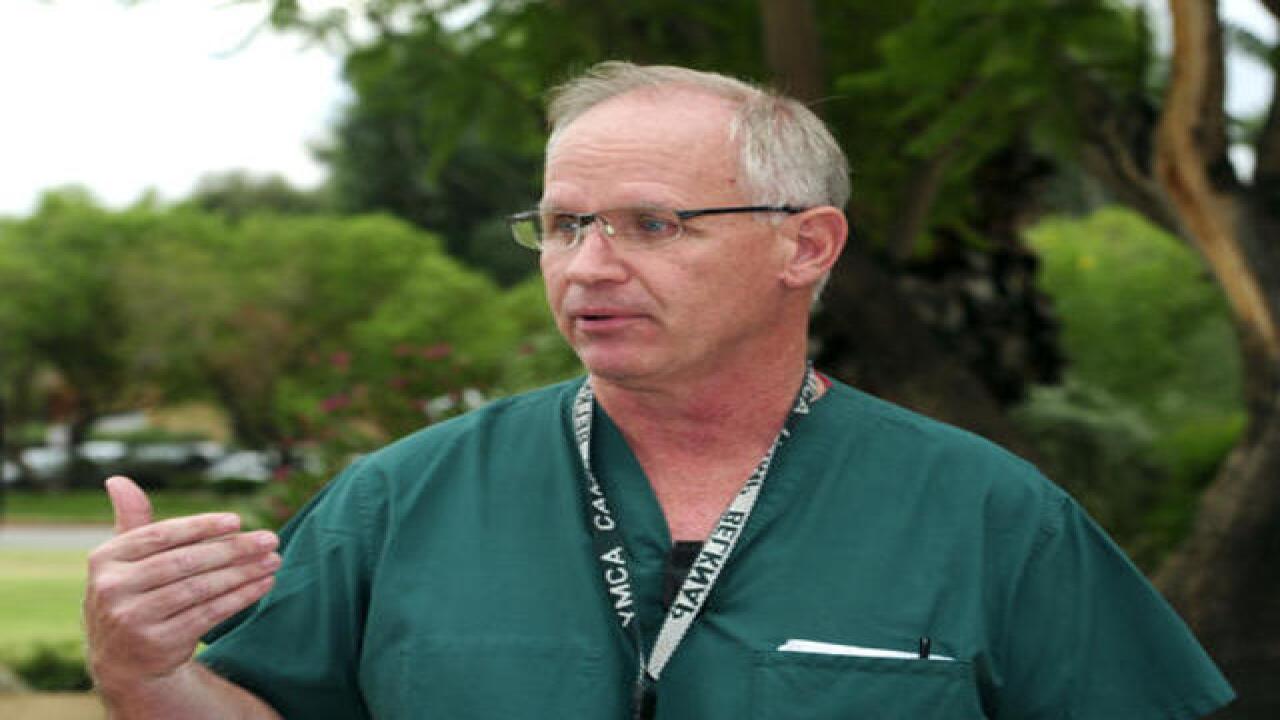 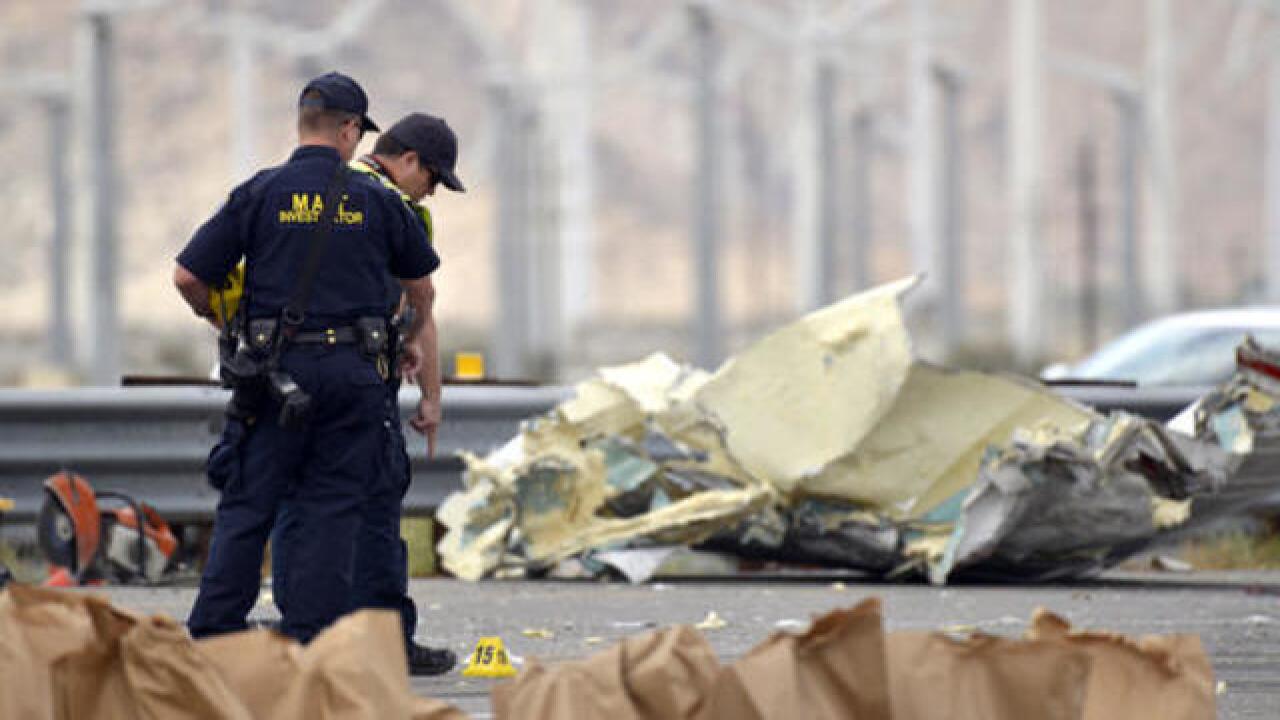 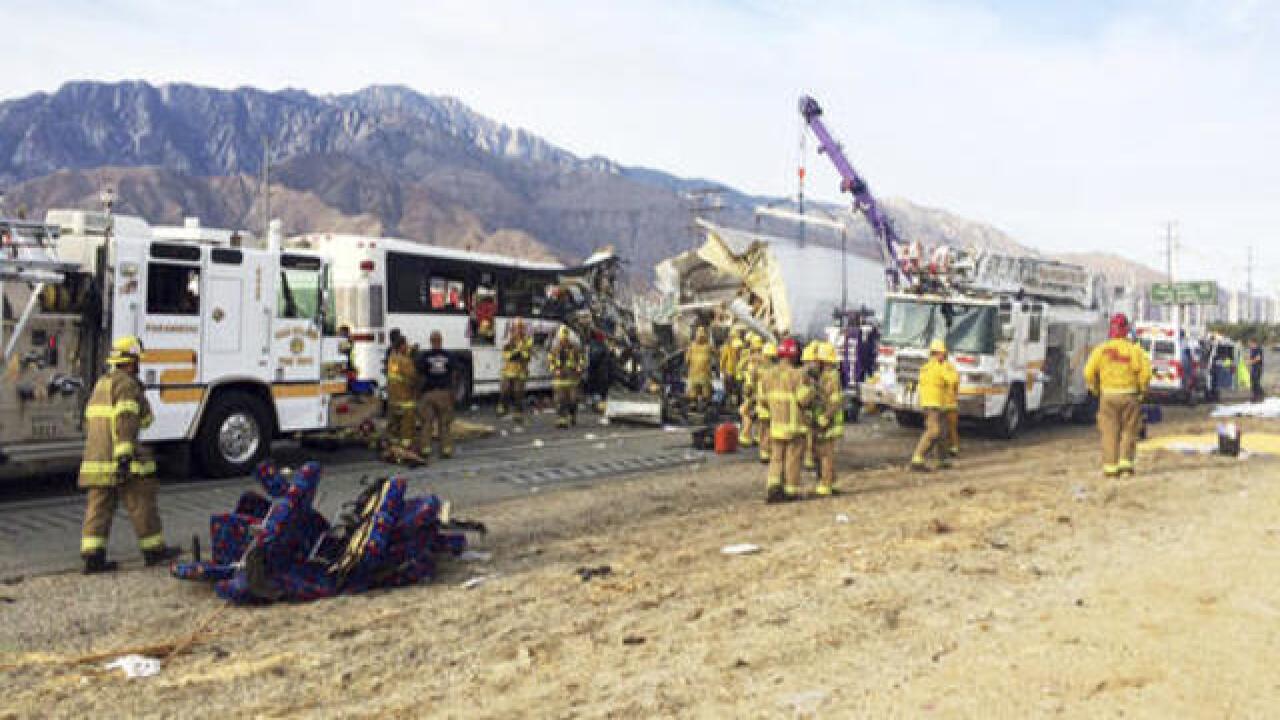 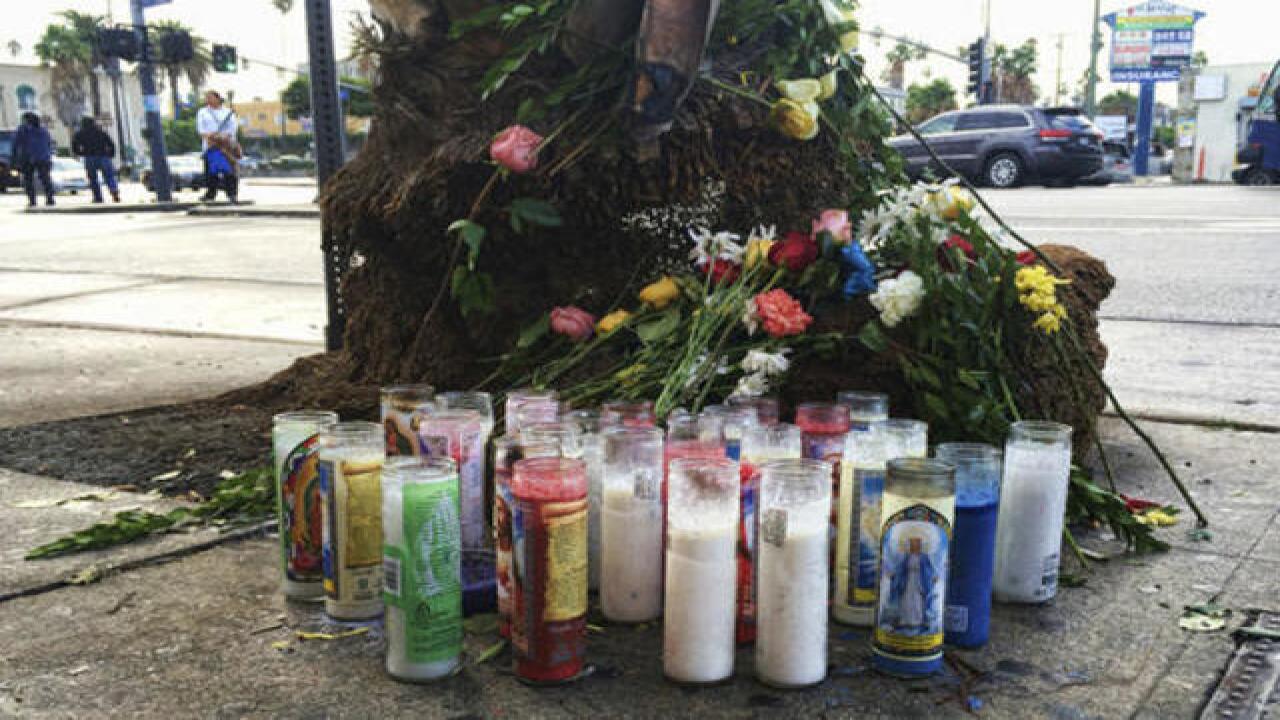 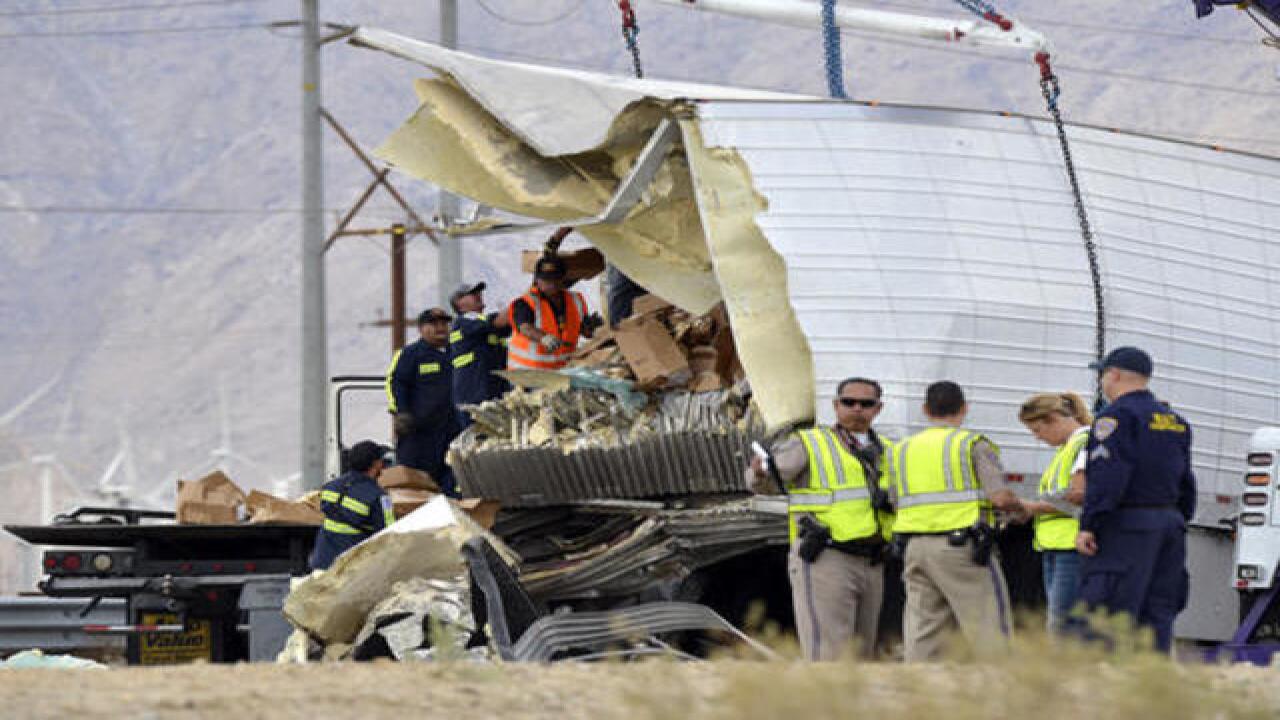 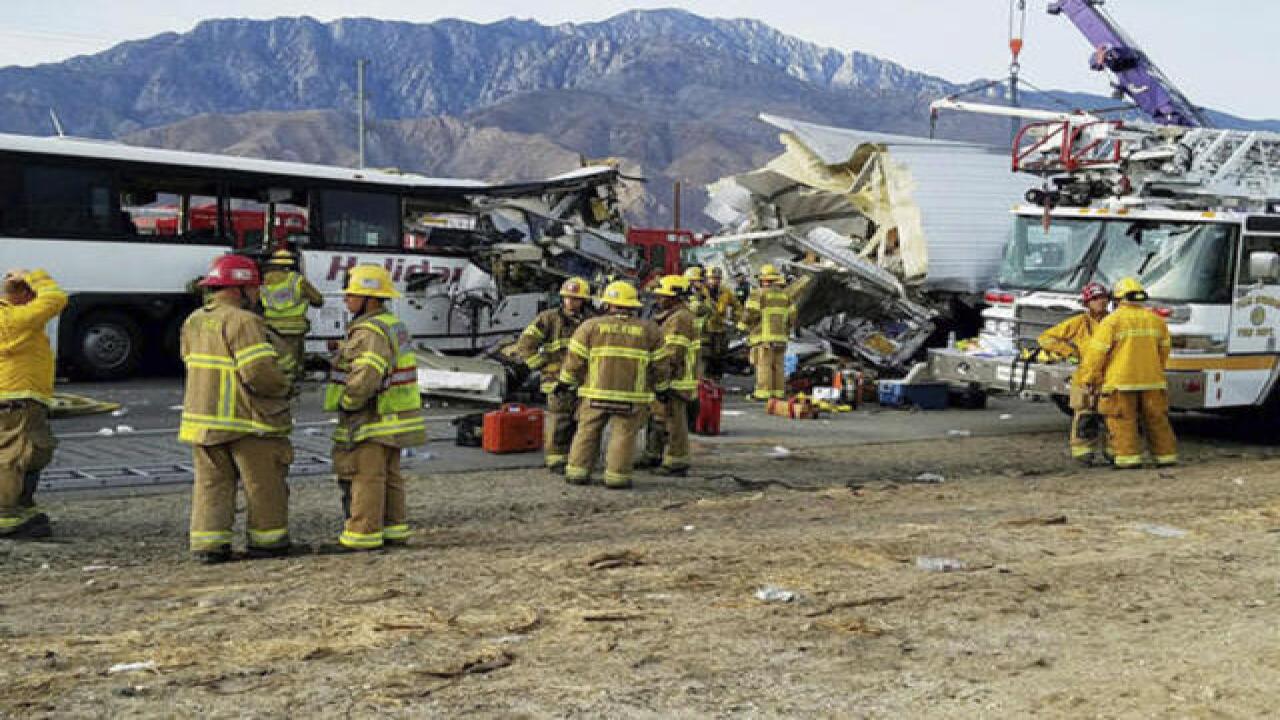 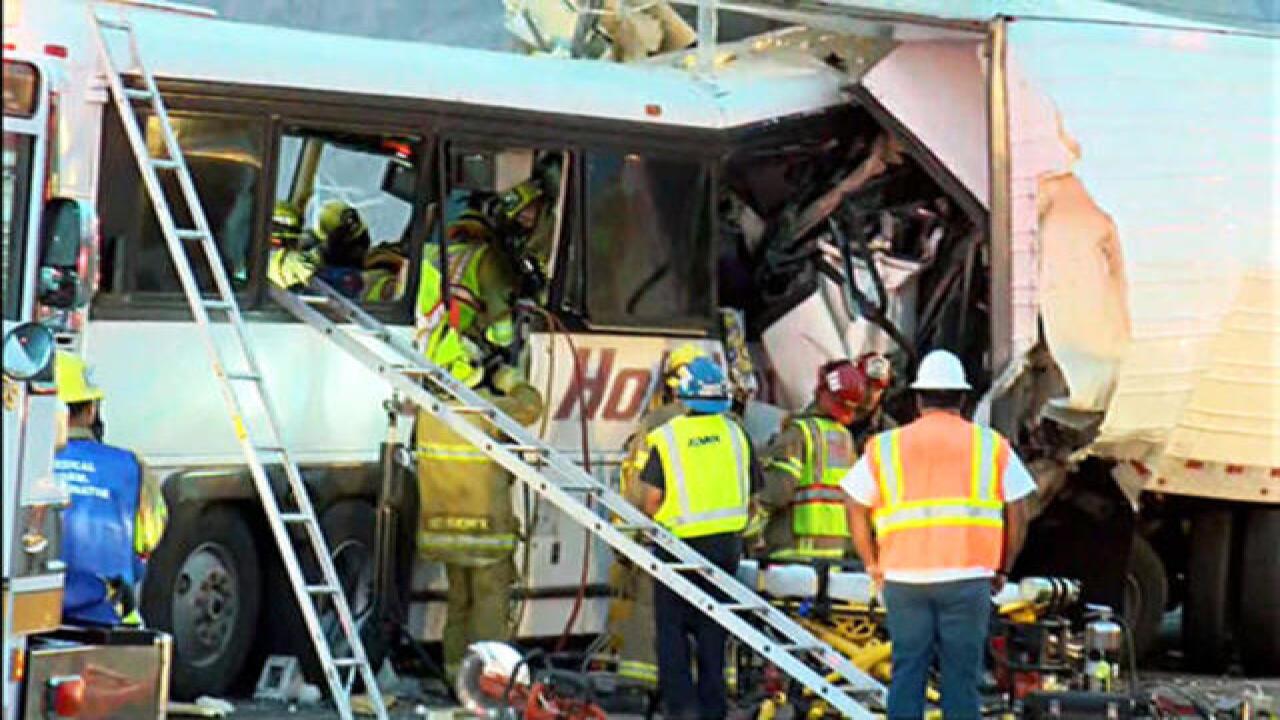 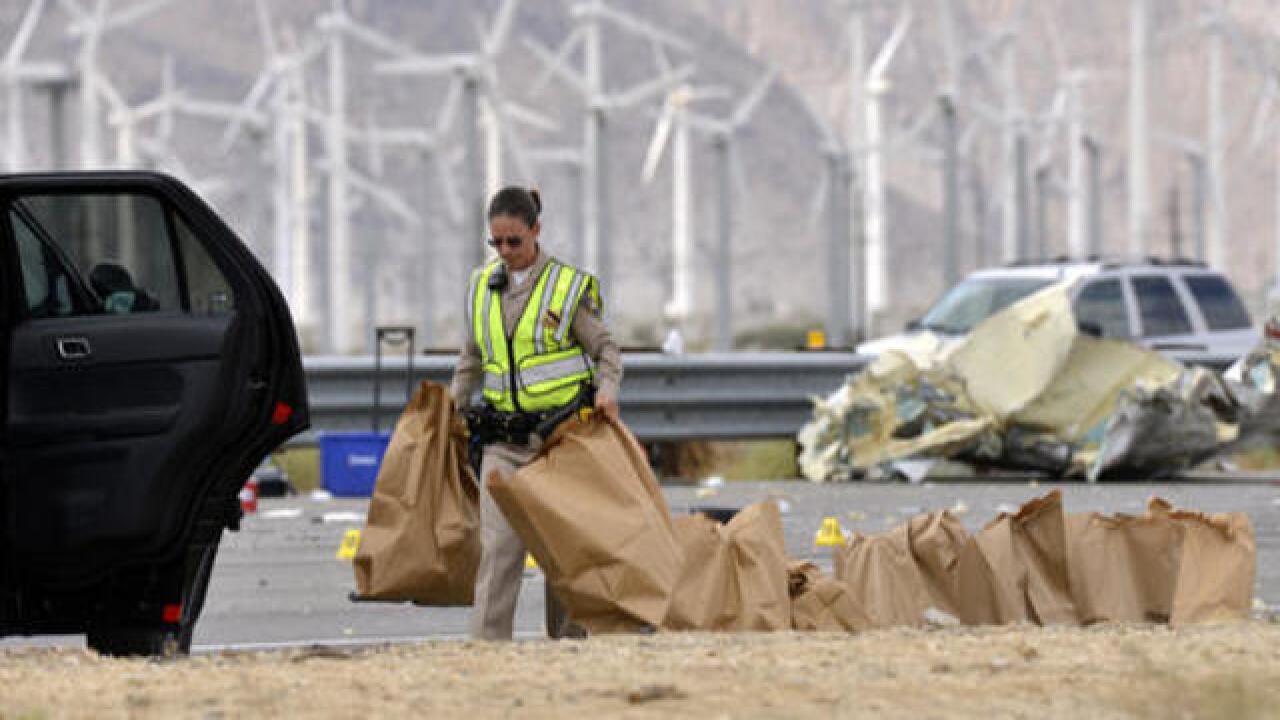 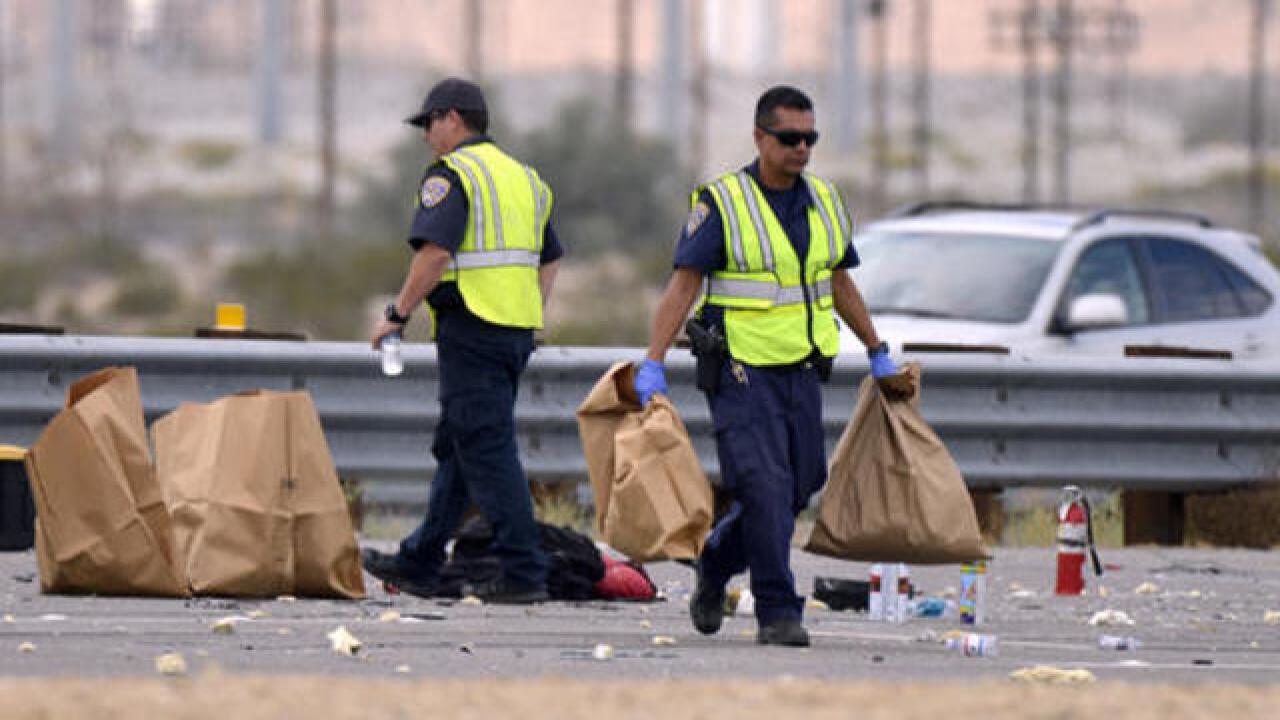 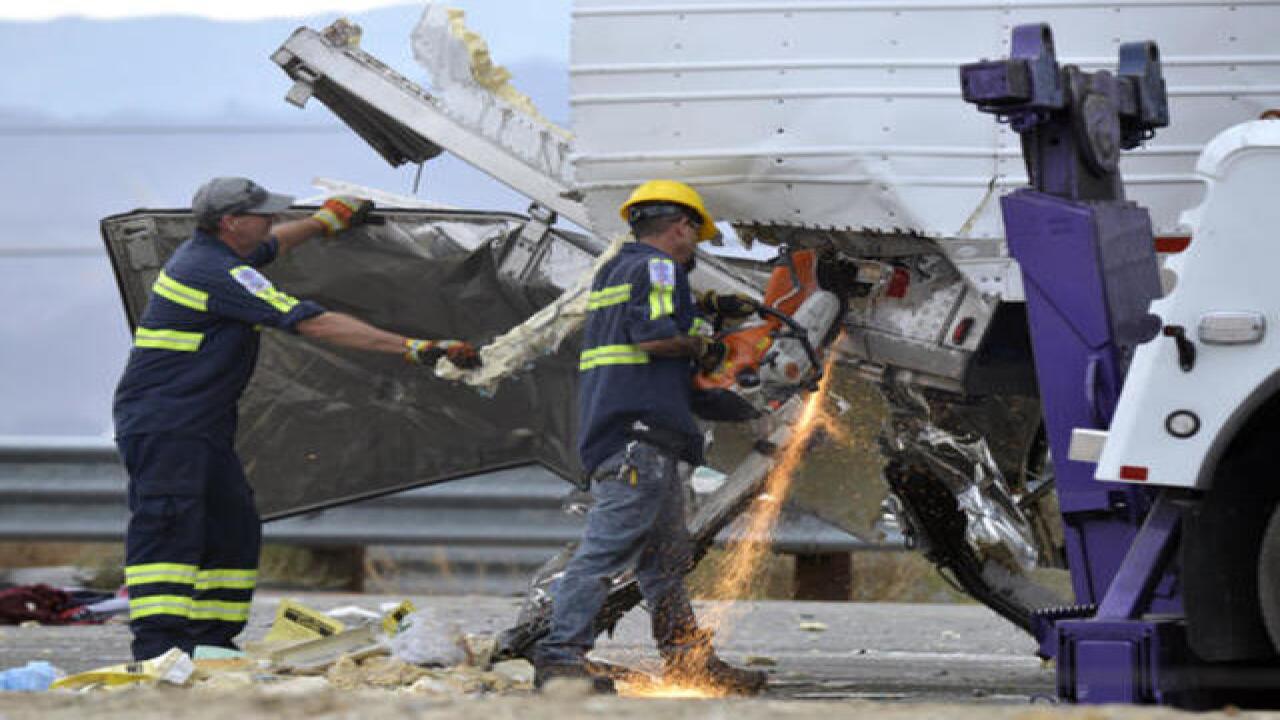 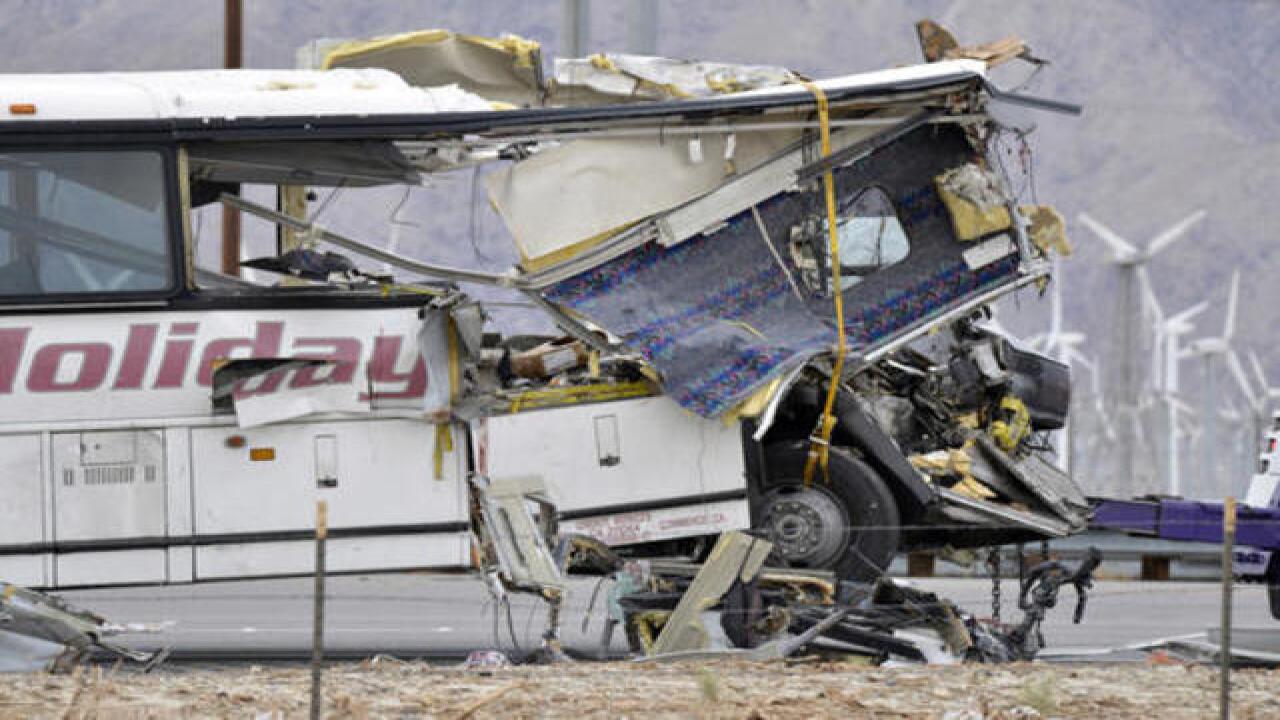 By: ELLIOT SPAGAT, Associated Press
Posted at 2:31 PM, Oct 24, 2016
PALM SPRINGS, Calif. (AP) — A maintenance crew had slowed down traffic on a California highway through the night, and the work had gone on for hours without problems. Then a tour bus returning to Los Angeles from a casino trip slammed into the back of a semi-truck. Passengers who were asleep on the bus woke up to the sound of crushing metal and screams.
The gambling jaunt ended in one of the deadliest wrecks in California history with 13 people killed and 31 others injured.
Authorities said the truck was going 5 mph when the bus plowed into it at a much faster speed on Interstate 10 just north of the desert resort town of Palm Springs. The collision crushed the front 15 feet of the bus.
"You can see it was a substantial impact," California Highway Patrol Border Division Chief Jim Abele said.
It was not known if alcohol, drugs or fatigue played a role in the crash, but the bus was inspected in April and had no mechanical issues, Abele said. The bus driver was killed, and the truck driver received minor injuries.
The bus was coming from Red Earth Casino in the desert town of Thermal and was about 35 miles into its 135-mile trip back to Los Angeles.
CHP officers had been slowing traffic to allow utility workers to string wires across the freeway, Abele said.
Passengers said most people were asleep when the crash occurred shortly after 5 a.m. Abele said it appeared the 1996 bus didn't have seat belts and likely didn't have data recorder that would reveal how fast the bus was traveling and whether the driver braked before impact.
Ana Car, 61, said she never felt the crash but awoke to the horror of the sounds of screaming and crying. Most passengers had been flung to the front of the bus and those who could move were pushing and shoving in the dark to climb out from under each other.
The retired factory worker started screaming and clambered to a broken window to yell for help, panicked she would be trapped if the bus caught fire. Motorists who stopped to help pulled her out the broken window.
"I couldn't stand when they got me out," Car said. "I sat on the side of the road, watching them pull so many people out. I saw so much blood and two dead bodies. I was so scared."
Before April, the bus also was inspected in 2014 and 2015, the CHP said. Federal Motor Carrier Safety Administration records show it had no crashes in the past two years and had a satisfactory safety rating.
The front of the bus crumpled into the semi-truck's trailer and debris was scattered across the key route through Southern California. Firefighters used ladders to remove bodies through windows, and tow trucks lifted the trailer to make it easier to reach the bus, whose front end was demolished.
Fourteen patients were sent to Desert Regional Medical Center in Palm Springs, the area's only trauma center. Of the eight who were still known to be hospitalized, four remained in critical condition Monday, hospital officials said.
Many suffered facial injuries, a telltale sign they were not wearing seat belts, said Dr. Ricard Townsend, a trauma surgeon.
"It seemed as though most of the victims were unrestrained and were therefore flown through the air and ended up sustaining facial trauma," he said.
The Riverside County sheriff-coroner's office identified 11 of the 13 people killed, naming nine women between the ages of 52 and 72, a 62-year-old man, and the bus owner-driver, Teodulo Vides, 59. All were from Los Angeles except for a woman who was from Palmdale. A man and woman had not been identified.
The tour bus company, USA Holiday, has one vehicle and one driver, according to federal regulators. A call to the company was not immediately returned.
The company says on social media that it has more than 25 years of experience traveling to casinos in Southern California. It posts about quick turnaround trips leaving the Los Angeles area to casinos in the Southern California desert area and Las Vegas.
The bus owner's neighbor said she'd often see a tour bus with the sign "USA Holiday" parked on the street in front of his apartment in a working-class neighborhood in Alhambra, about 7 miles east of downtown Los Angeles.
Sonia Anderson said the family who lived there — a man, woman and their college student son — had lived in the apartment for about 17 years. She said the father generally drove the bus and his wife and son would sometimes travel on the bus with him.
Anderson described them as a kind, close-knit family. "All three of them are hard-working people. Good people. Beautiful family," she said.
The father was "always working, coming in and out, providing for his family," Anderson said.
The National Transportation Safety Board is sending a team to California to investigate.
The crash comes two years after a FedEx truck veered across an interstate median north of Sacramento and slammed into a bus full of high school students, killing 10 people.
In 1963, 32 Mexican farm workers who were in the Central Valley as part of a work visa program were killed when a freight train struck the flatbed truck they were riding on.  In 1976, a bus carrying the Yuba City high school choir plunged off a freeway ramp in Martinez, killing 28 students and one teacher.
Rodriguez reported from San Francisco. Associated Press writers Julie Watson in San Diego, Courtney Bonnell in Phoenix, and Daisy Nguyen and John Antczak in Los Angeles contributed to this story.
Copyright 2016 The Associated Press. All rights reserved. This material may not be published, broadcast, rewritten or redistributed.
Copyright 2016 The Associated Press. All rights reserved. This material may not be published, broadcast, rewritten or redistributed.