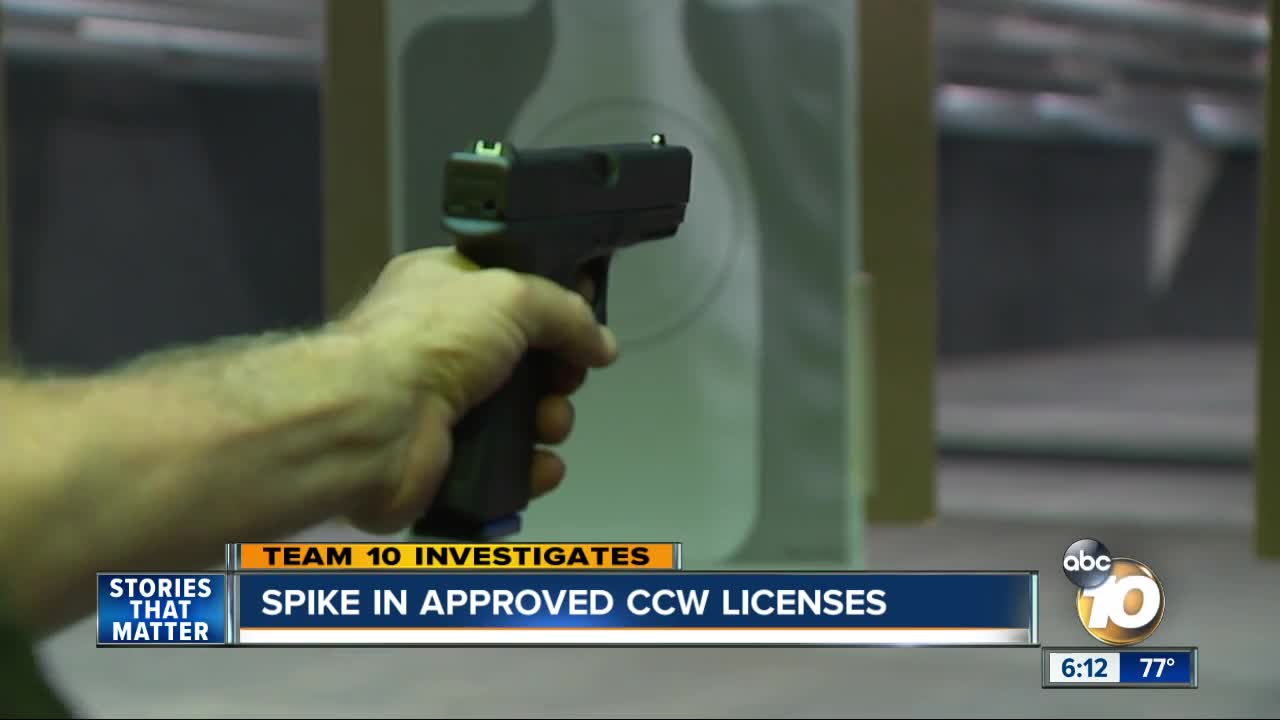 Data provided to Team 10 by the San Diego County Sheriff's Department shows a more than 300 percent increase from 2017 to 2018. Data provided to Team 10 by the San Diego County Sheriff's Department shows a more than 300 percent increase from 2017 to 2018.

Advocates say most people want the ability to protect themselves while opponents argue more people carrying guns doesn't make the streets any safer.

Team 10 collected 100 "good cause" statements to examine what reasons people gave to obtain the license. It's a part of the CCW application people have to fill out explaining why they should be approved for a permit. In almost every case, the reason had to do with personal safety.

Inside Poway Weapons and Gear students are on the range demonstrating their proficiency on firearm safety, firearm handling and shooting techniques.

They are firing round after round at targets set out at different distances.

An instructor's hollering out commands, "There is no time limit, shooters stand by." Hit the correct number of targets and you pass. Demonstrate you aren't proficient and license renewal is denied.

"I shoot frequently, it is a perishable skill, so it's something you need to practice because if you are going to be armed, you need to hit what you point at," Ricardo Higgins said.

"I've never had to draw, but for my family's safety, for the community's safety, I feel it's better to be able to defend myself and those around me," Higgins explained.

Higgins first got his CCW license three years ago. He's former military and wanted the ability to protect his family.

"Some of the church shootings caught my awareness because it seems that the people that are trying to do harm seem to go to places where people don't have firearms," he said.

Higgins is just one of a handful of San Diego area residents Team 10 met while at the license renewal course.

The San Diego County Sheriff's Department is the local agency tasked with approving or denying CCWs.

In the first seven months of 2019, the department has already authorized 767.

"I think it's education," Gore said. "We're getting the word out that, oh Sheriff Gore at the Sheriff's Department does give out concealed weapons permits."

In 2009 the county was sued. The case went all the way to the Supreme Court. The court decided not to step in giving Gore and the county the win.

But in 2017 Gore had a political challenger who he claims politicized the issue.

Gore won the election but made changes.

"We did look at our criteria and maybe and maybe we were overly restrictive," Gore said. "I wanted to work with the San Diego gun owners to make it fairer."

All the controversy surrounded what's known as a good cause statement.

The department's website describes that statement as, "Applicants for a CCW should be able to set forth a set of circumstances that distinguishes the applicant from other members of the general public and causes him or her to be placed in harm's way. Simply writing 'self-defense' or 'personal protection' on an application does not provide the requisite proof of good cause."

In handwritten and typed out personal letters, people described why they want a CCW.

One applicant wrote:
"I am a co-owner of six rental units in a high-crime area of Escondido. As a property owner, my obligations include performing repairs and maintenance on the units. This typically entails transporting tools and equipment to the property, day or night, to complete the work and I am often alone. Given the location of the property and the fact that I often carry equipment that is highly valuable, I find myself in very dangerous situations where unscrupulous people can target me for robbery and/or criminal attack."

Another wrote:
"Based on the fact that I am the public face of the meetup group as well as someone who has been in the Bitcoin/cryptocurrency space for a long time, it is more likely for an attacker to target me compared to other members of the group. Also, the risk of an attack occurring rises as the value of Bitcoin and other cryptocurrencies rises, since an attacker would consider someone's Bitcoin/cryptocurrency holdings to be of greater value after a value increase. With the recent significant rise in the value of Bitcoin and other cryptocurrencies, the risk of being attacked has risen significantly as well. Because of this, I am afraid that I will be killed, injured or robbed. For this reason, I respectfully request that I be granted a concealed weapons permit."

A father wrote:
"Due to the reasons above, my family and I are sometimes compelled to wait before exiting the car or exiting the house due to suspected or obvious criminal activity on the street. There have been situations where I have even withdrawn due to concerns over my children's safety. One example was an incident that involved an unknown individual, who walked out of his car behind me, started banging on the driver's side window of my vehicle, and proceeded to yell and try to open my vehicles doors. Could not hear what exactly this person was saying to me as he was yelling uncontrollably and it startled my family so much that they were crying in fear of their lives. Luckily, I was able to quickly drive away and due to some traffic up ahead he was unable to follow me. If I were armed, I would still withdraw, but I am concerned that someday there could be a situation in which I didn't see the warning signs and didn't leave the scene in time, or I could not gather my children and leave in time to avoid danger."

A business owner working as a contractor for churches wrote:
"I had already locked the door to the church. I was outnumbered and I'm medically unable to run. I have a handicap badge. I was also carrying a substantial amount of cash. As they got closer one youth yelled, 'What do you have there, old man?' I said, 'Church books.' Just as I said that a car pulled up outside the church parking lot and someone yelled to one of the youths. Luckily that diverted their attention in that direction and they headed toward the vehicle. I quickly left. Very unnerving situation."

"There is a lot of promotion out there in the gun industry in general of sort of a fear factor that we live in dangerous times -- we're out on the street you need to be able to defend yourself and protect your family," said Ron Marcus, director of public outreach for San Diegans for Gun Violence Prevention.

"What better way to do that than have a loaded gun on your person at all times so you can feel that sense of security at all times," Marcus said. "So I think that sense of fear in our society is stoking more people to go out and buy firearms that are specifically designed to be concealable that they can wear on their person and feel more secure out in public."

Marcus argues that more guns on the streets don't make people safer; it does the opposite.

Marcus points to a 2017 study by a Stanford University researcher that concluded states that have enacted a right-to-carry concealed handgun laws have experienced higher rates of violent crime than states that did not adopt those laws.

Marcus said while it may be comforting to assume that if one is concealing a gun and was caught in a situation with a "bad guy with a gun" in public, that they'd have a way to defend themselves, the reality is that is rarely occurs, and, when it does, the "good guy" is likely to miss, hit the wrong person, or be mistaken by the "bad guy" when law enforcement arrives.

"There isn't any evidence that I could find that is the opposite that says we're safer on the streets because of concealed carry," he said.