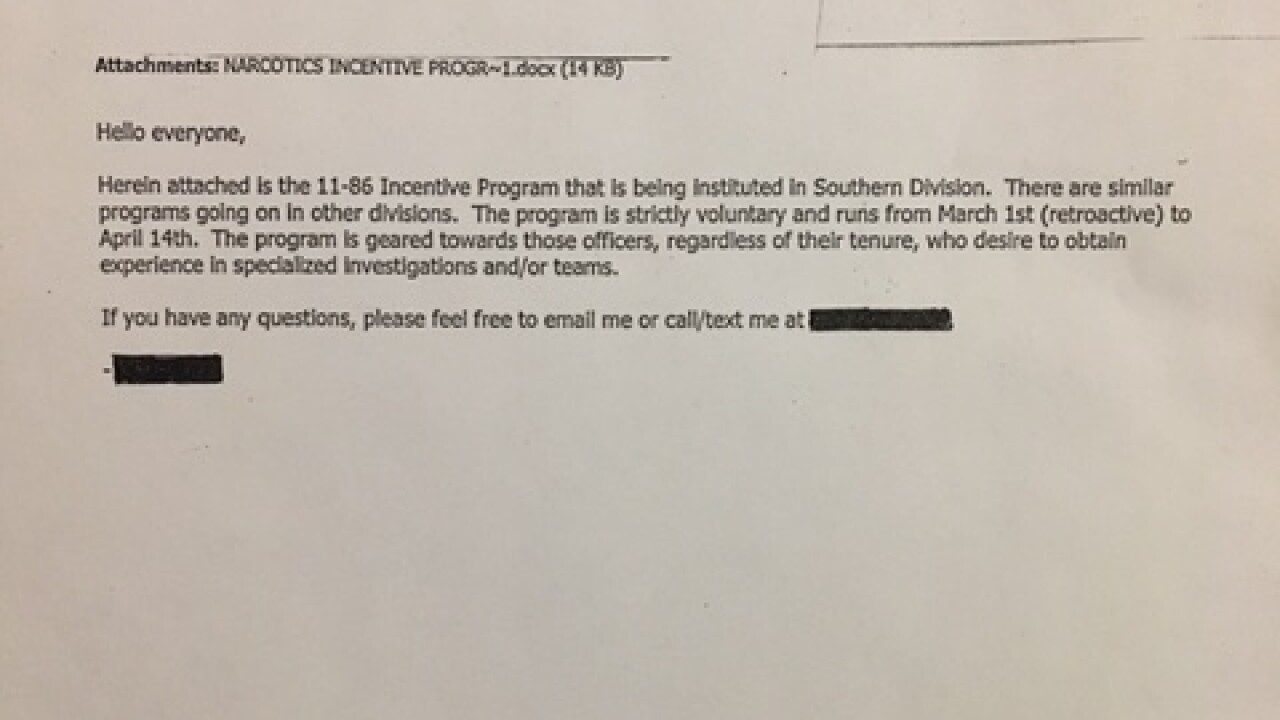 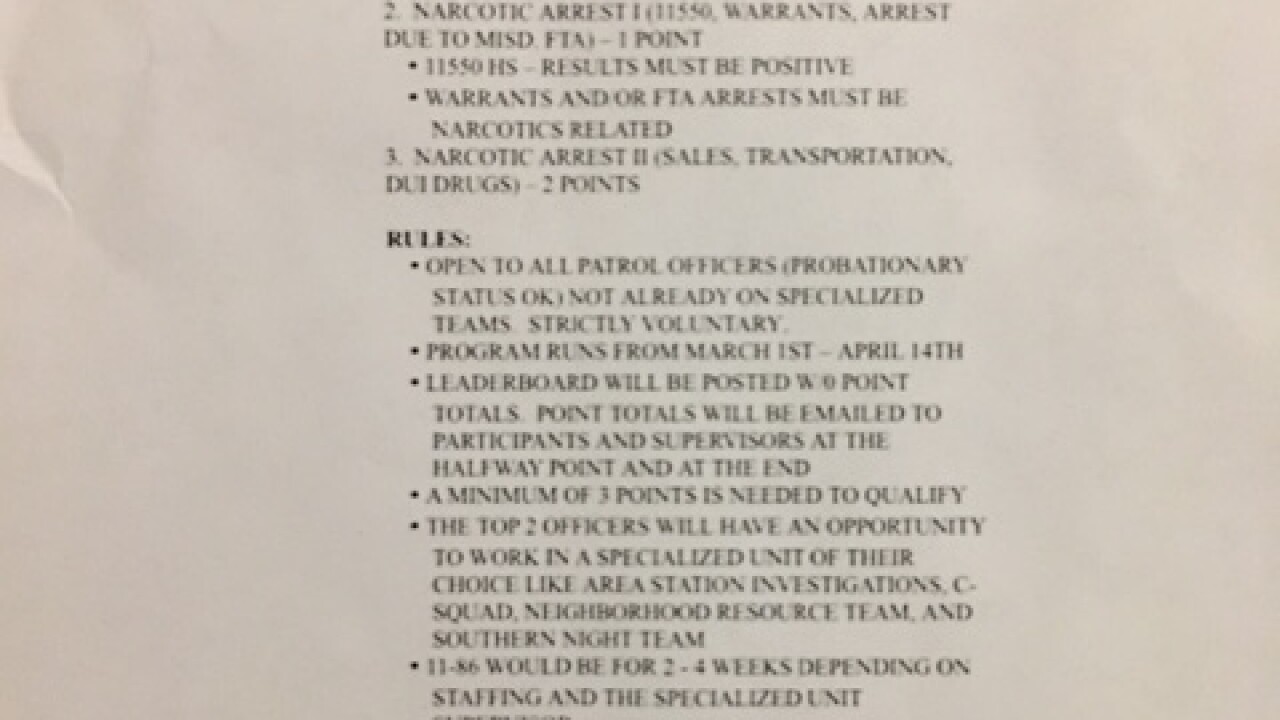 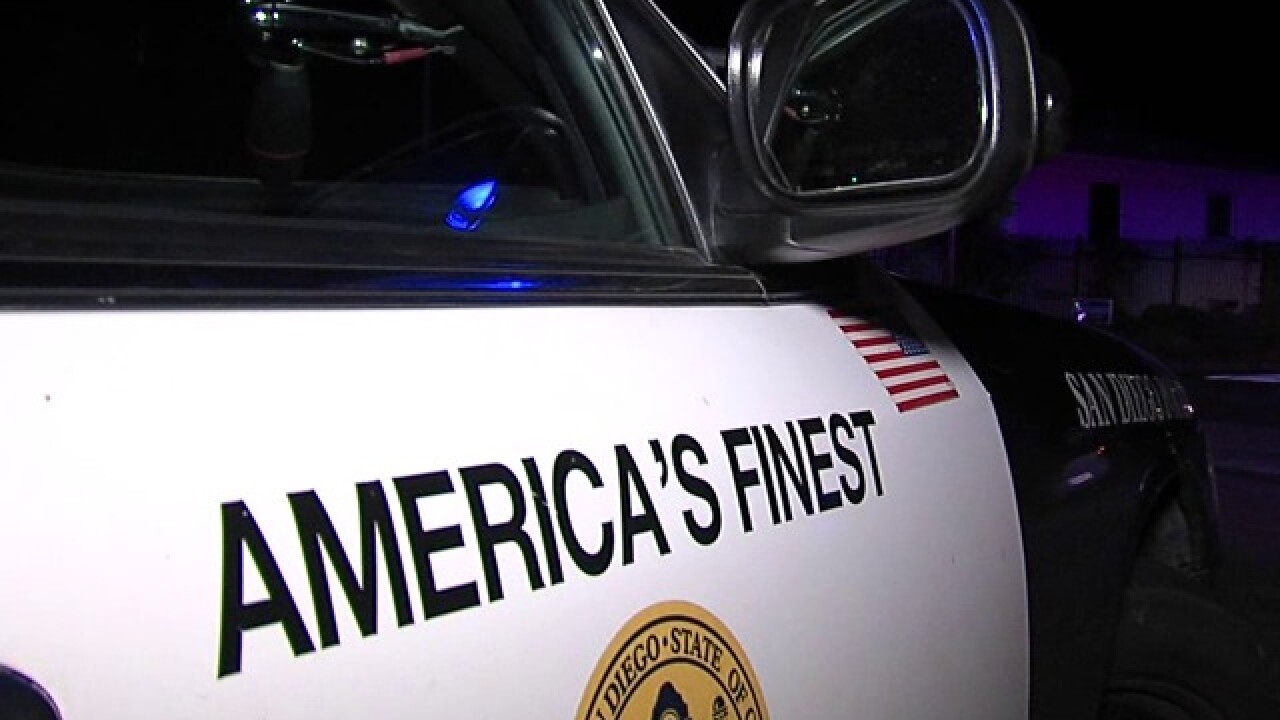 SAN DIEGO (KGTV) - In an exclusive interview with 10News, a San Diego police officer is blowing the whistle on a newly unveiled program that reports to reward officers for making more narcotics arrests.

“It’s completely everything that we are against as law enforcement officers. It’s unethical,” he tells us during a disguised sit-down interview. 10News is not publishing his name, face or voice. He fears losing his badge for breaking his silence.

“It’s a reward system. A bounty system for officers seeking rewards for their arrests,” he tells us.

Accompanying the email is an attachment outlining the program details, including the point scale.

The attachment also details the overall goals of the program, some of which include motivating officers, providing opportunities to gain experience in specialized units regardless of tenure, and targeting areas with high crime activities.

Our source says he and others raised concerns.

He says the program would target low-income neighborhoods with fewer resources to fight drug problems.

“That’s unfair because my intention as a police officer is to help those neighborhoods entirely. [My intention is not to] proactively seek people that meet the criteria to arrest, to reward myself,” he said.

On Wednesday, San Diego Police Department spokesperson Lt. Brent Williams confirmed via phone that the email was sent out by mistake and it was never approved by the patrol chief. Williams reports that the program was never implemented.

“That is false. It has been implemented since the 1st of March,” our source tells Team 10.

On Wednesday afternoon, Lt. Williams sent the statement below to 10News:

“Our Officers are encouraged to be creative and come forward with new ideas while being professional and ethical. All ideas brought forward are vetted through our approval system and we are confident everything was done correctly in this instance.

The San Diego Police Department does not utilize any incentive programs that would negatively impact the citizens of San Diego.

We are proud of the work our officers do and will continue to provide excellent service to the citizens of San Diego.”

Following receipt of the statement, 10News sent Lt. Williams a request for clarification as to how “everything was done correctly," although the email was sent by mistake.

We’ve also asked what action the department has taken since the incident. We will update the story upon getting a response.