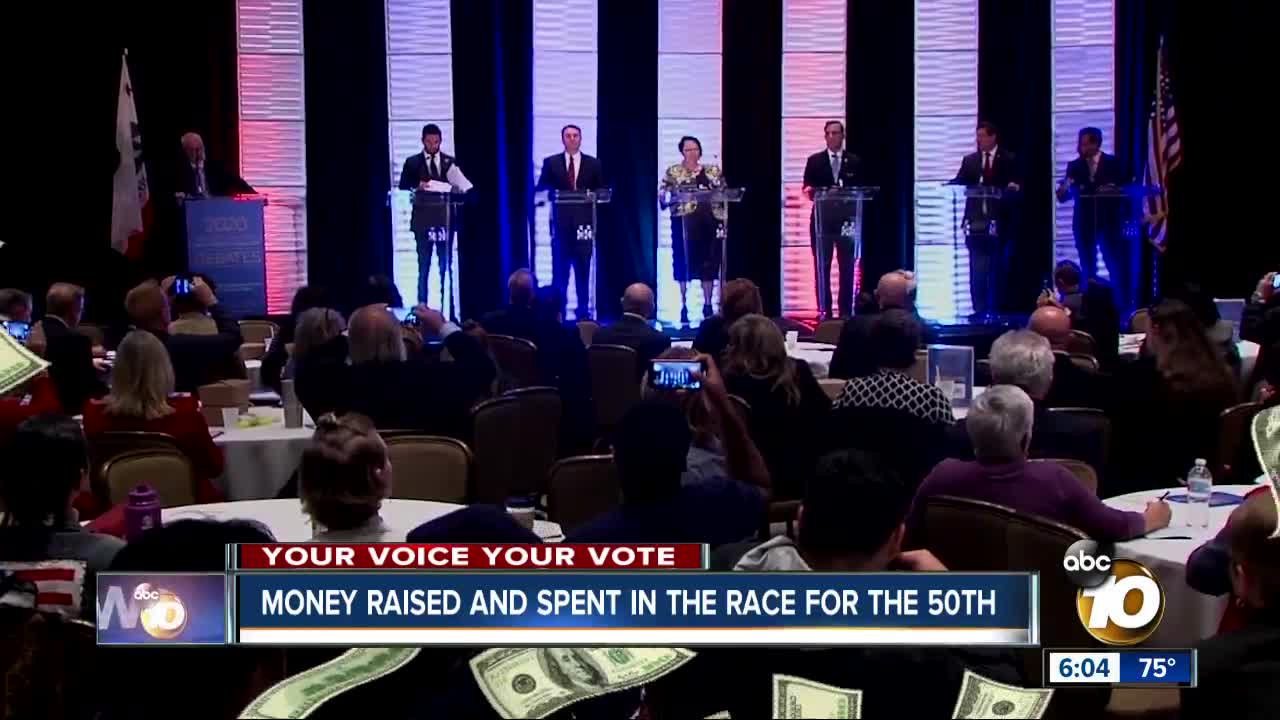 Millions of dollars have been raised and spent in the race to fill the seat for the 50th Congressional District. 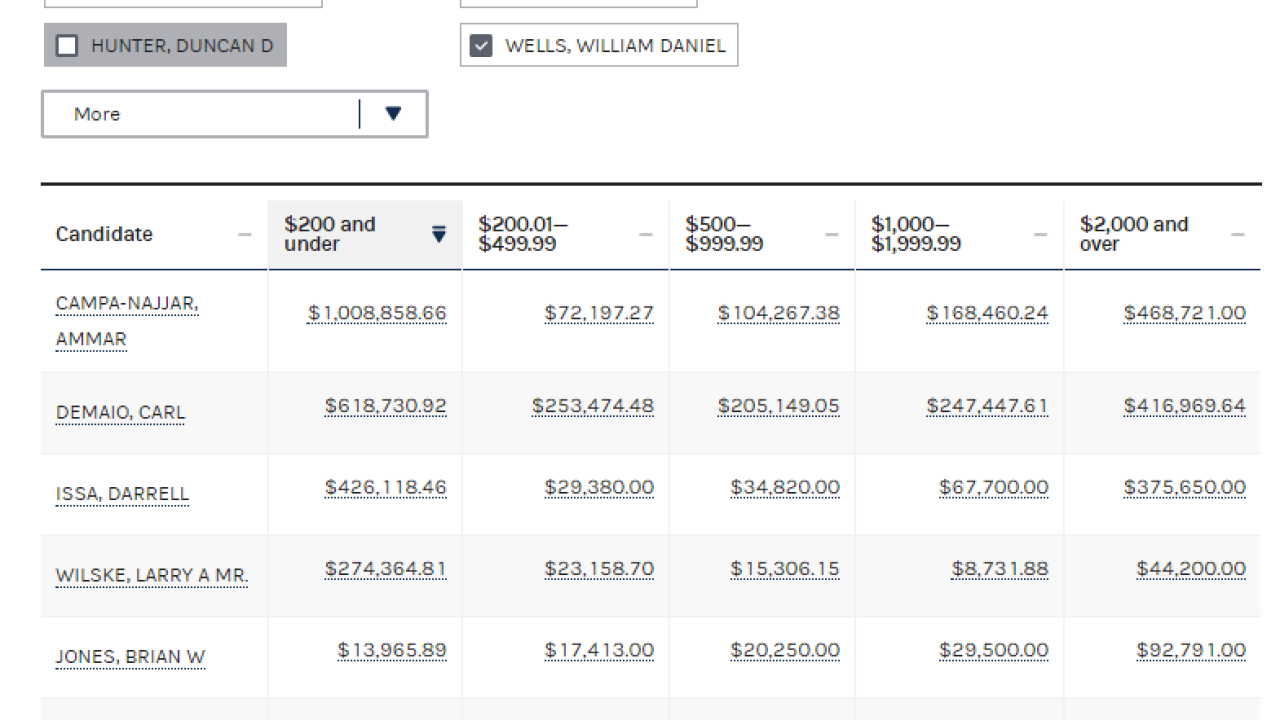 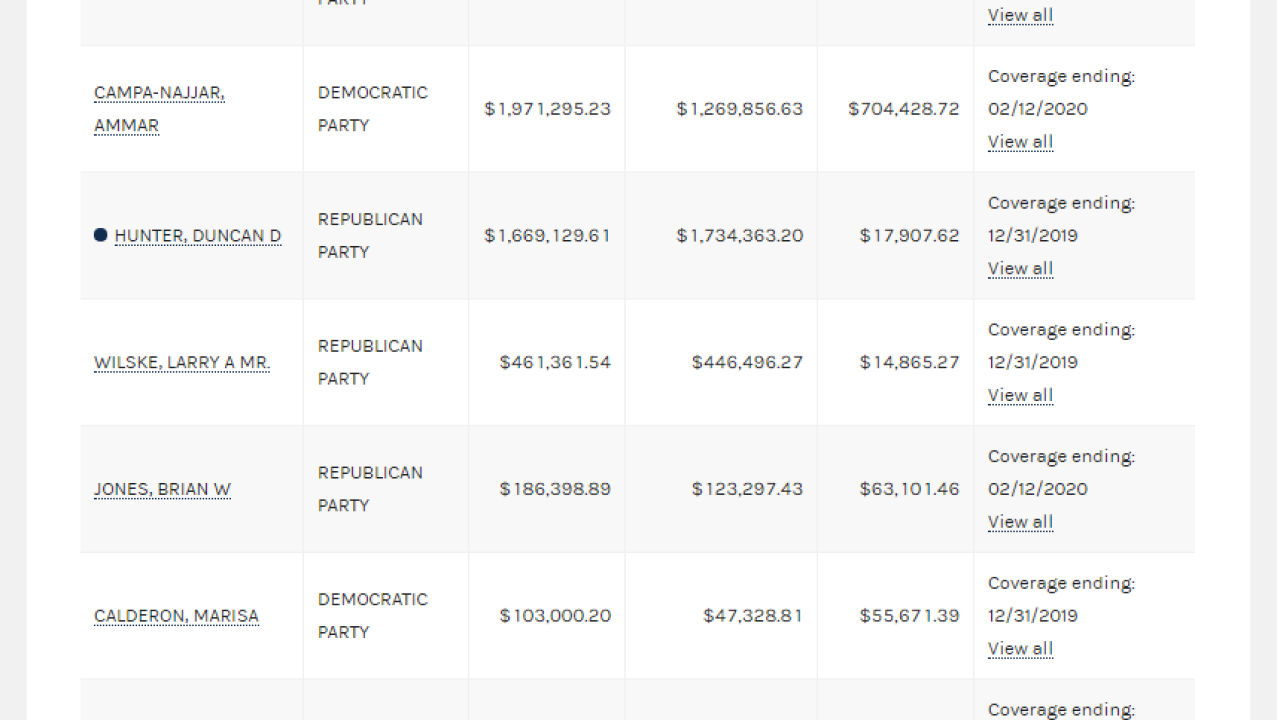 SAN DIEGO (KGTV) -- Millions of dollars have been raised and spent in the race to fill the seat for the 50th Congressional District.

According to the FEC records, Issa compiled more than $4.1 million in total receipts and has $1.4 million in cash on hand.

When you browse through receipts for Issa, FEC records show he contributed $1.2 to the campaign in two separate contributions in 2019.

The FEC defines total receipts as: "the sum of all contributions and other receipts received by a committee during a filing period, and cash on hand includes funds held in checking and savings accounts, certificates of deposit, petty cash funds, traveler's checks, treasury bills and other investments valued at cost."

According to the FEC's website, Democratic candidate Ammar Campa-Najjar has $1.9 million in total receipts and a little more than $700,000 cash on hand.

Those numbers are for pre-primary reports ending February 12, 2020.

"Money in politics gives you the chance to get out your message through television ads, through those glossy mailers that are probably clogging up the mailboxes of people in the 50th and getting a well-organized staff," said Thad Kousser, chair of the Department of Political Science at UC San Diego.

According to the website OpenSecrets, a nonprofit that tracks political spending across the country, candidates in the 50th have raised more money than almost every other congressional house race in California.

"This kind of fundraising, about $10 million for a congressional district, is about what you'd see in the battleground congressional districts, the ones where Republicans and Democrats are closely matched, and everyone knows it's going to be a toss-up," Kousser said. "Where you don't see it is in a match like this, which is by rights a Republican seat."

According to OpenSecrets, a lot of the money pouring into the race is from outside the district.

The website's breakdown of donations shows DeMaio and Campa-Najjar received the most in-district contributions.

10news asked the candidates who are leading in the latest 10News/Union-Tribune poll to comment on recent fundraising support, how the candidate thinks it went heading into the primary, where the majority of the money came from, and any other comment they'd like to make.

Here are the responses:

"Right now, we are in a strong position to win one of the nation's most competitive congressional districts. Our people-powered campaign has raised over $2 million dollars this cycle, with an average donation of $28 dollars, and a majority of those contributions coming from district voters. We are not taking a dime from corporate PACS or special interests-- just individual donors. That's why voters believe me when I say I'll introduce an amendment to overturn Citizens United and get big money out of politics once elected. The massive amount of grassroots support we're receiving in this race is a testament that our strong positive 'people over politics' message is inspiring supporters of all parties. Voters here are ready for something different--a Congressman who was born and raised in East County who is only beholden to the people of this district, not party leaders or special interests.
- Ammar Campa-Najjar

"While Darrell Issa had to write himself a $3 million personal check to try to buy this seat and run ads lying about my record, I'm proud of and grateful for the more than 34,000 grassroots contributors that have given an average of just $64 each to help me get the truth out to voters that I will stand with President Trump and fight to secure the border."
– Carl DeMaio

"We are making sure we have the resources to win this race because Carl DeMaio has received hundreds of thousands of dollars in financial support from Washington, D.C. Never Trump liberals who want to see the president fail."
– Spokesperson for Darrell Issa

"We're feeling great. All we needed was enough to remind fellow 50th residents that I'm the only candidate that truly shares their values: 100% pro-life, A-Rated by Howard Jarvis Taxpayers Association."
– Senator Brian Jones