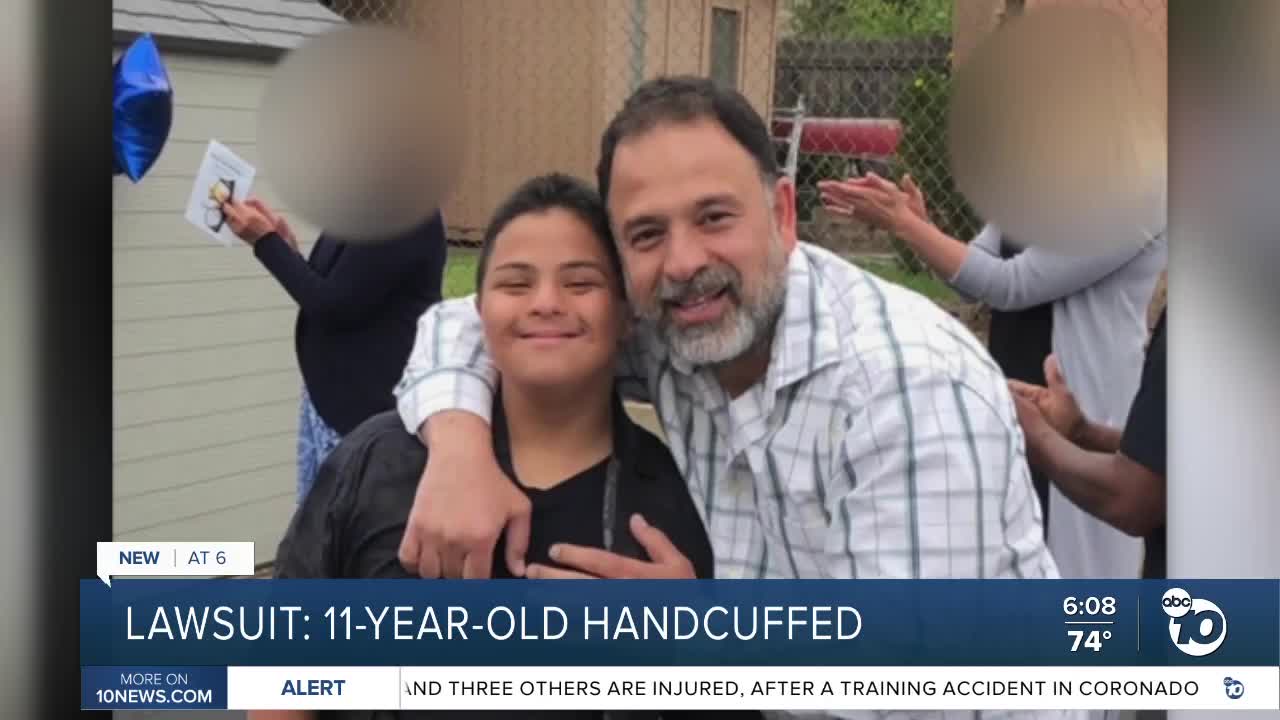 The parents of a student with Down syndrome said their child was handcuffed and detained by La Mesa police officers after he was able to walk off his elementary school's campus. 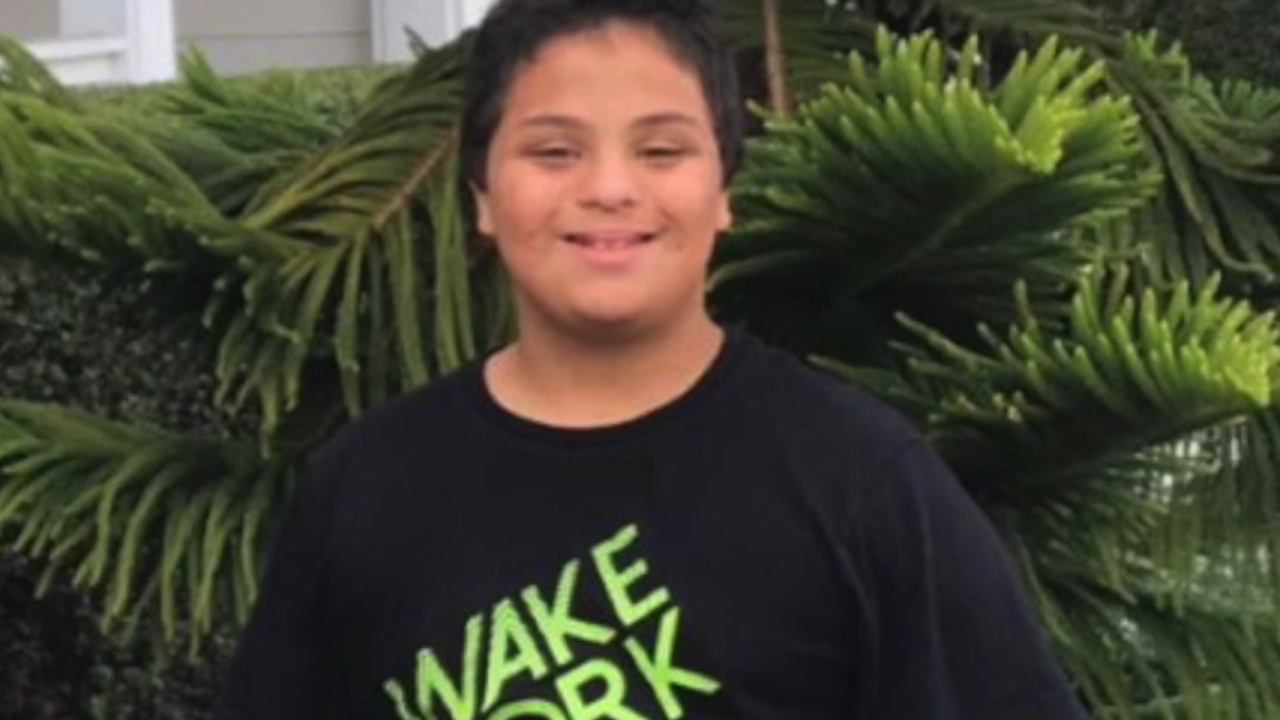 EDITOR'S NOTE (9/2/2020): THIS STORY HAS BEEN UPDATED WITH A STATEMENT FROM THE LA MESA POLICE DEPARTMENT.

SAN DIEGO (KGTV) - The parents of a student with Down syndrome said their child was handcuffed and detained by La Mesa police officers after he was able to walk off his elementary school's campus.

According to a lawsuit filed Thursday against the City of La Mesa, La Mesa-Spring Valley School District and several people, "Five or more La Mesa Police Department ("LMPD") officers showed up and, without any reasonable basis, handcuffed and subdued Hassan Almahmodi until his parents arrived sometime later."

"I find it very hard to believe that these seven to eight officers, all grown men, all trained with all their equipment, generally believed that Hassan posed a threat to them," said Almahmodi family attorney Brody McBride.

The lawsuit says Hassan was terrified and cried out for help.

"They traumatized this kid," said McBride. "He's got lasting and significant injuries as a result of this."

McBride said in August 2019, Hassan was able to leave his class and walk beyond the main gates of Murray Manor Elementary School.

According to the lawsuit, school staff stopped Hassan when he reached the public sidewalk, where he sat down on the ground to wait for his parents.

"They (the school) called the parents and said Hassan had gotten off the school grounds and they needed to come to the school," McBride explained.

The lawsuit states, "There was, in short, no reasonable basis to handcuff or physically subdue Hassan. The LMPD officers did so anyway. The LMPD (La Mesa Police Department) officers held Hassan down on the curb, still handcuffed, until his parents arrived. Hassan was terrified, crying for help."

McBride said when Hassan's parents arrived at the school, they saw their child sitting on a curb, crying, surrounded by La Mesa police officers.

According to the lawsuit, "Ultimately, Hassan's father arrived. He demanded that Hassan be un-handcuffed. The officers did not immediately comply, instead leaving Hassan handcuffed while insisting on talking to his father and only later removing the handcuffs."

The lawsuit claims La Mesa police officers unnecessarily and unreasonably handcuffed and subdued Hassan solely because of his disability.

McBride said Hassan was born with Down syndrome and is largely non-verbal. He said the incident traumatized Hassan.

"His behavior and overall demeanor after the incident took a real turn for the worst," McBride said. "For days he would just cry for no reason, he started wetting the bed, and probably the most pronounced was his fear of the police. He's terrified of police now."

The La Mesa Police Department and city manager did not respond to 10News’ request for comment on the allegations in the lawsuit.

ABC 10News also requested the department's policies and procedures when it comes to handcuffing children and responding to calls with people with disabilities. ABC 10News also asked the city for a list of officers who responded to the incident and any body-worn camera video.

McBride said he's asked the La Mesa Police Department for body-worn camera video from the incident but was told all the footage had been deleted except for one clip which he was not provided.

In an email to ABC 10News, the La Mesa-Spring Valley School District assistant superintendent for business services wrote, "I can assure you that our teachers and administrators care deeply about our students with special needs. The district's policy is not to comment on issues related to pending litigation."

The La Mesa Police Department reached out to ABC 10News after this story published and issued the following the statement:

On August 29th, 2019, at approximately 9:14 AM, the La Mesa Police Department received a request for assistance from staff members at Murray Manor Elementary School. The reporting party stated that an 11-year-old student with Down’s Syndrome had removed all of his clothing and was attempting to run away from the campus. The reporting party further related that the student had a history of being aggressive and violent. Staff members were using their bodies to attempt to create a barrier to prevent the student from running farther from campus.

When officers arrived approximately 5 minutes after being dispatched, the student was located at the corner of Jackson Drive and El Paso Street, which is a heavily traveled intersection. The student, who was still nude and weighed approximately 230 pounds, was not complying with directions from the officers or school staff. The officers on scene were concerned that the student would endanger himself by running into the street, so he was placed in handcuffs for his own safety and to provide a level of control. The student resisted being placed in handcuffs by flailing his arms, so a total of three officers, one to hold each arm and a third to apply the handcuffs, were required to safely accomplish this task. An item of clothing was immediately used to cover the student while his shorts were located. Officers then assisted school staff in getting his shorts back on.

The student’s parents arrived a short time later and he was released to their custody. There were no injuries or criminal charges. The entire call, from dispatch time to disposition, was just under 30 minutes. The student was detained by officers, for his own and others’ safety, for approximately 20 minutes.