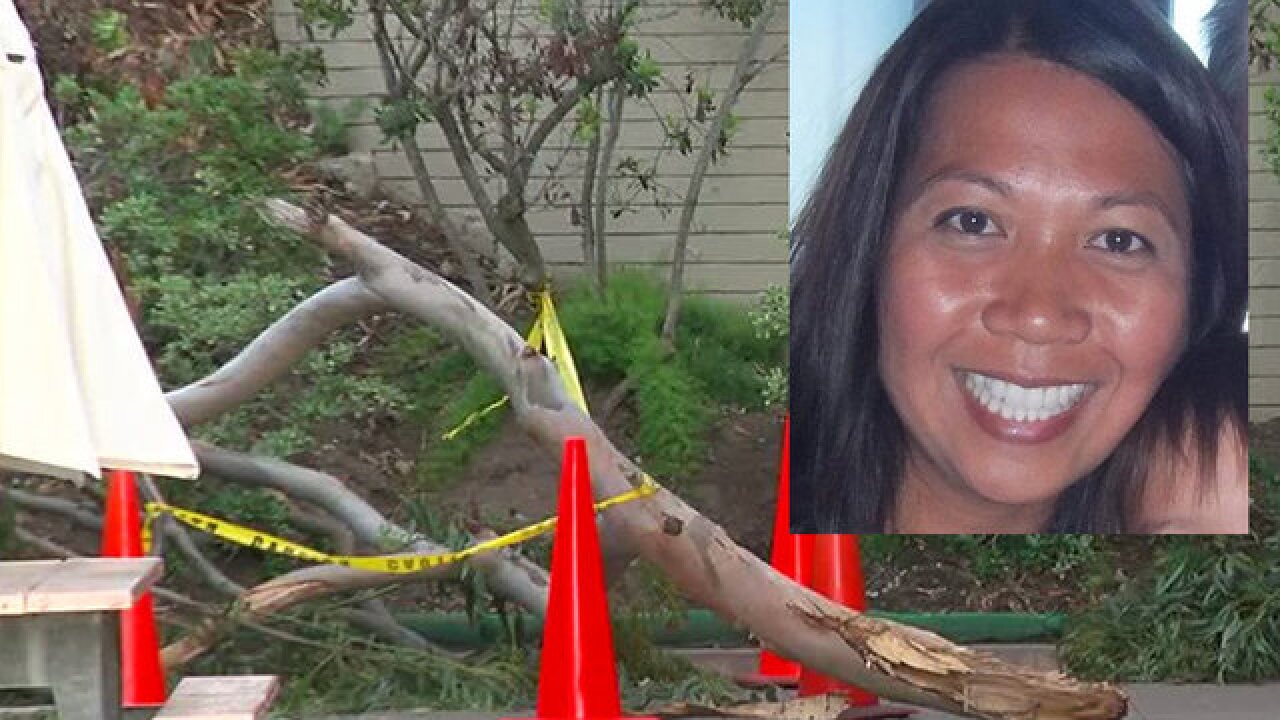 The accident in the 10700 block of Red Cedar Drive in Scripps Ranch occurred shortly after 2 p.m., according to the San Diego Fire-Rescue Department.

Parents hailed O'Shea as a hero after she pushed several young students out of the way as the branch fell.

"My kid was inches away from death today, and that's why I'm here, I'm mad about that," one parent said.

"If it had hit her just right, it could have killed her instantly. She's just very lucky," said tree expert Wayne Tyson. "It's a very serious matter and it needs to be taken seriously."

No one else was hurt in the mishap, Amador said.

On Thursday morning, district officials had an arborist inspect all trees on the Miramar Ranch campus for danger and other problems. A tree trimming crew was also on hand to cut down any branches that looked suspect.

The courtyard where the tree branch fell was off limits to students on Thursday; cones and caution tape surrounded the area.

Some parents told 10News they weren't really concerned for kids' safety at school Thursday, but some wished the district had been more proactive in inspecting the trees after all the recent rain and storms.

Parent Julia Roper said, "We can't cut them all down, unfortunately. I don't know what else we can do except what they're trying to do, and make the campus as safe as possible right now."

Parent Jeannie Corralez added, "I think it's more of a maintenance type of thing. We've had these rain storms and heavy winds. A lot of trees get very weak and I think after something like that, especially at a school, we need to just have them check. You know, a safety check. It should have been done before an accident happened. But, thankfully, they are doing it today to prevent anything further. And hopefully this will kind of give the flag if something like this, big storm or winds come along, that they do this right after to prevent something else devastating happening."

Katie Watson's niece saw the branch fall and hit her teacher. She told 10News, "We were yelling, 'Look out, look out.' And, um, it came down, it twisted; we saw teachers scrambling to pull kids out of the way, both on the top and bottom steps. Ms. O'Shea pushing kids out of the way, which is why she didn't move, and it hit her and took her down the steps, which was awful."

"My niece's initial reaction was, 'I don't want to go to school.' She didn't want to walk the dogs yesterday, be anywhere near trees or anything. So part of it was talking through how unusual that is, for that to happen, and that we can't live in fear. We're going to embrace our life and do our things. By this morning she was OK," Watson added.