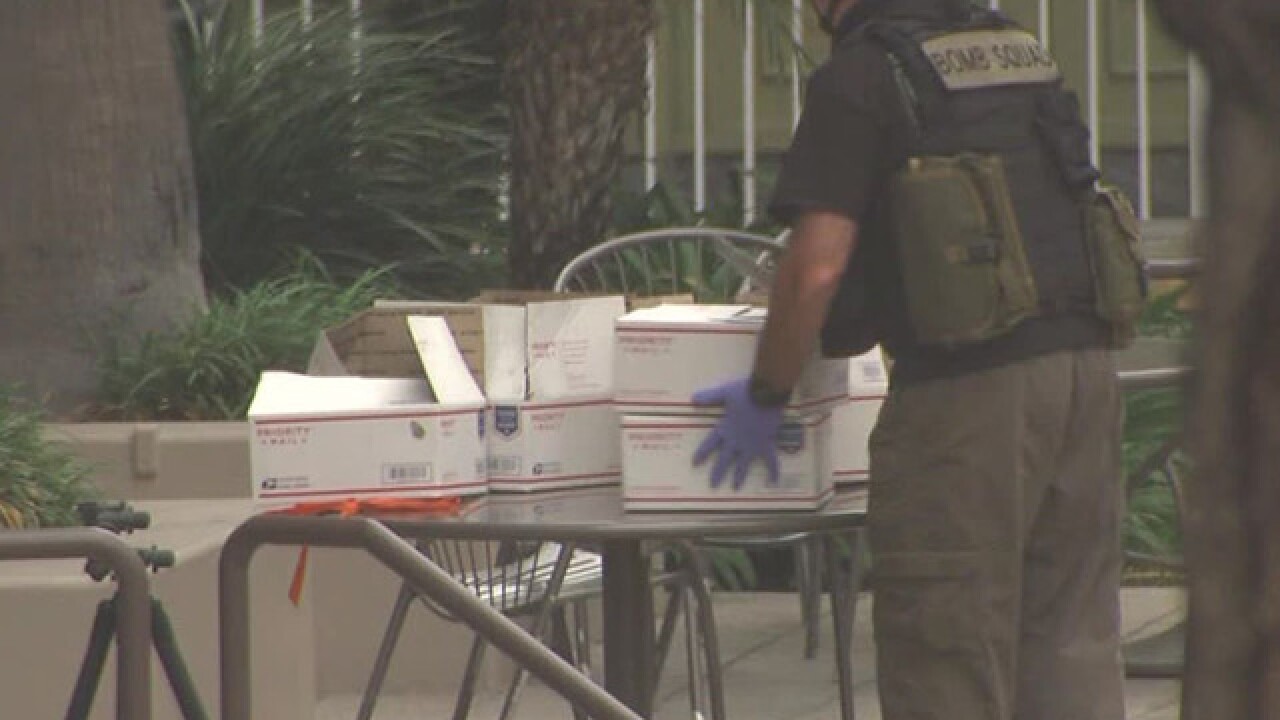 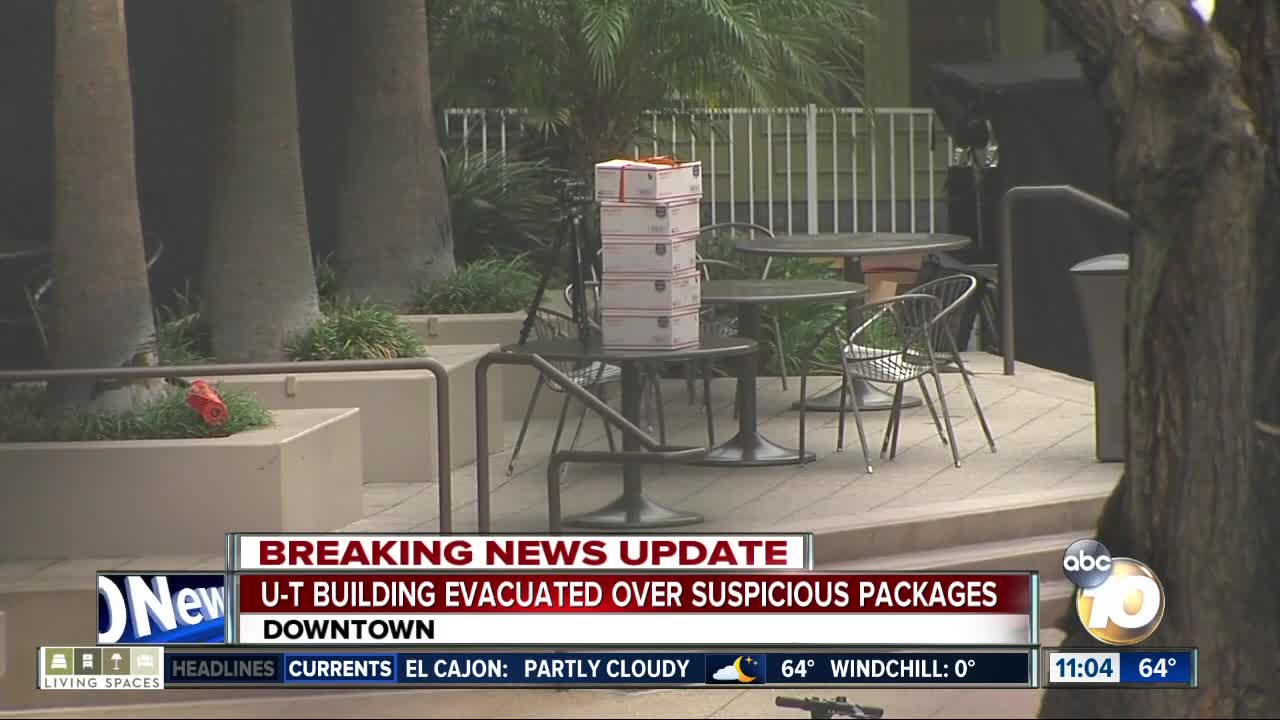 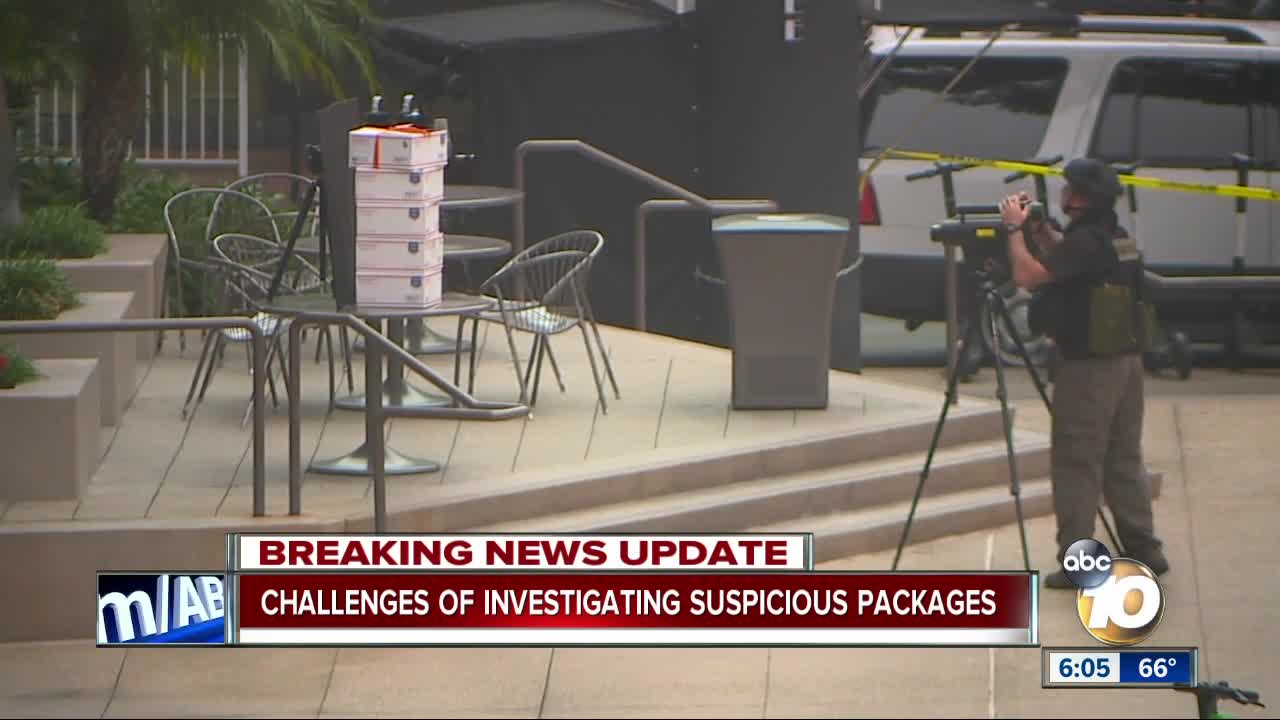 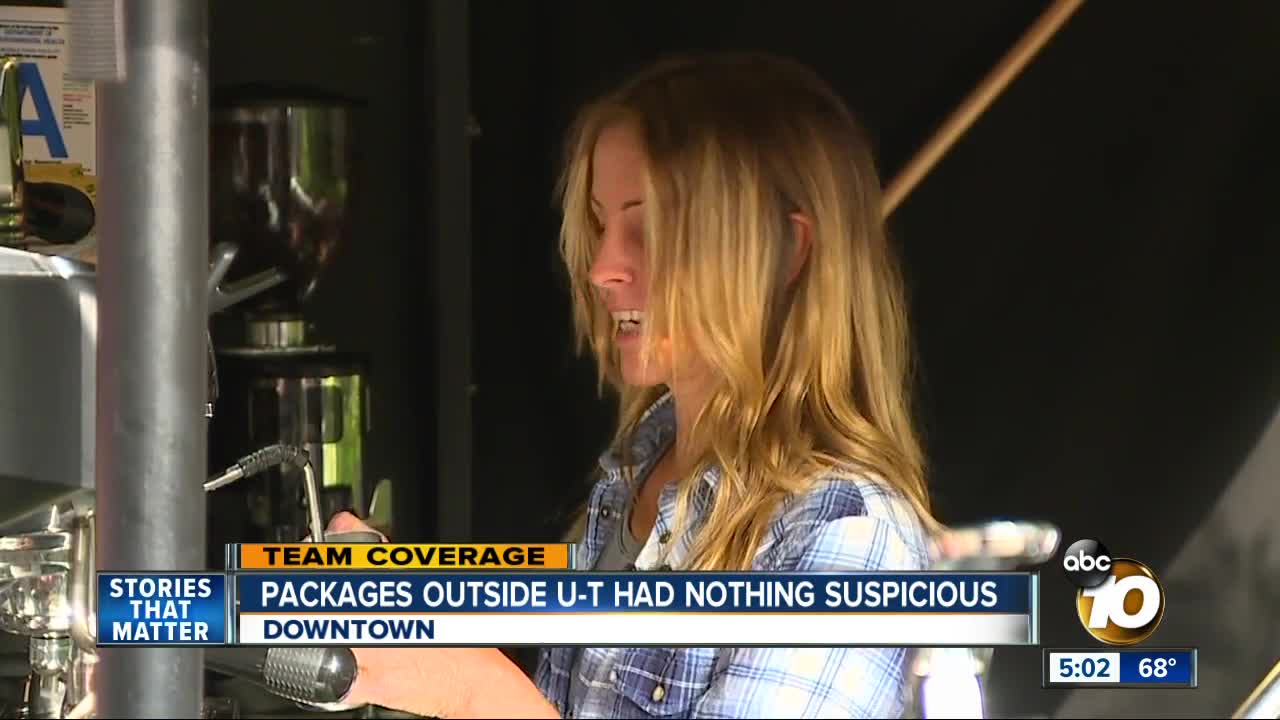 SAN DIEGO (KGTV) — The discovery of suspicious packages near a downtown San Diego building prompted evacuations, but the boxes were later determined to be harmless.

Authorities were called an area near the intersection of 6th Avenue and B Street at around 8:30 a.m. after several white boxes were found and deemed suspicious.

The WeWork building through the 13th floor was evacuated and traffic lanes were closed in a nearby area due to the investigation. San Diego Union-Tribune staff members, who occupy space in the building, were forced to evacuate, 10News learned.

"We’ve seen some different tragedies in newsrooms around the country so I don’t think this is 100% a surprise for any newsroom to face something like this. But it’s not something I expected waking up to this morning," UT Immigration Reporter Kate Morrissey said.

The building also houses an office for Sen. Kamala Harris, the San Diego Fire Department headquarters, and other government offices.

10News spoke to Christine Otis, who owns Christine's Coffee & Co., a small stand on the corner of B Street and 6th Avenue. She said she noticed the packages at 6am when she opened her stand. She thought nothing of them until she was suddenly forced to close her shop.

“I had some people in line. It was a really busy time, so it wasn’t a good time to leave," Otis said.

At 8:15 am, a passerby had flagged down Lt. Kevin Wadham, saying this cannot be a coincidence. Hours earlier, news of the Secret Service intercepting suspicious packages addressed to Former First Lady Hillary Clinton, President Obama, and CNN broke. The boxes in San Diego were at the SanDiego Union-Tribune headquarters, Senator Kamala Harris’ office, and other businesses.

“Out of an abundance of caution, this building at 6th and B was evacuated, and all the neighboring businesses," Lt. Kevin Wadhams said.

San Diego Police immediately called their Bomb Unit. They X-Rayed the boxes and found they contained nothing suspicious. The contents were a shoe, a football, an empty bag of chips, two children’s books, and a hat.

An hour later, and after a whirlwind of emotions, Otis was able to re-open her shop.

“It was kind of scary. I’ve been here for 15 years. And nothing like that has ever happened," Otis said.

Following an inspection by a bomb squad, evacuation order was lifted.

Surveillance video showed an unknown person placing the packages at the location at about 1:45 a.m., according to San Diego Police. Police added that the area is frequented by transients at night.

SDPD, ATF, and FBI officials were all taking part in the investigation.

10News spoke to Threat Assessment Professional, Wendy Patrick. She said the FBI investigators are now focusing on profiling the senders.

“What do the targets have in common? This case appears to be political ideology. But is it more than that" Patrick said.

These acts of terror can be inspired by a variety of things, Patrick said. It could be a stab at a political party, a news organizations, or a personal vendetta or grievance. While this morning’s incident at the San Diego Union-Tribune headquarters turned out to be non-threatening, Patrick said the heavy police presence and bomb squad response were appropriate.

"We want to make sure that we never let our guard down and we take every report as serious as we can," Patrick said.

Unlike political figures, regular citizens do not have the luxury of having the secret service monitoring our mail. So Patrick said it is essential that we be extra vigilant, especially during the season of giving.

“Even rudimentary bombs can explode in your face," Patrick said. "Unfamiliar packages should be treated with caution. Is there a return address and is it a name you don’t recognize? You might want to check that out before you just rip the thing open.”

A suspicious package in the mailroom of CNN's New York City newsroom led to a building evacuation.