An El Nino storm swept across the county Monday. 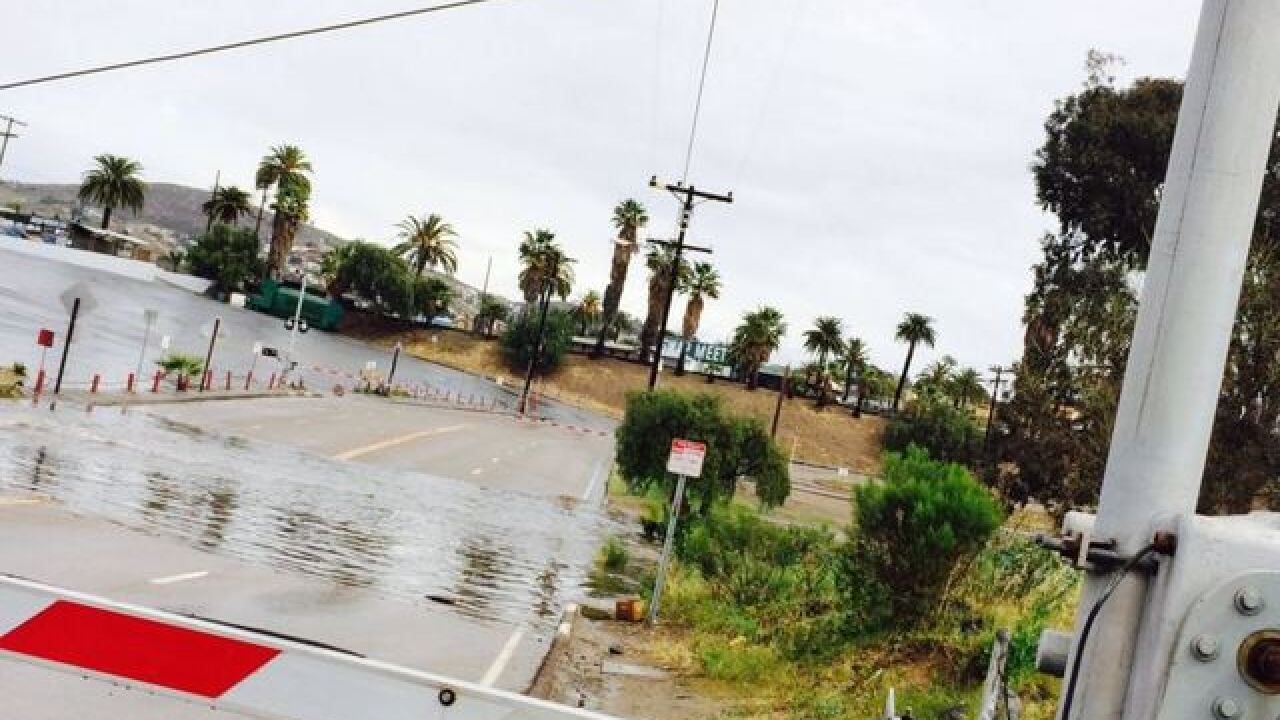 RADAR | FORECAST | FROM THE NEWSROOM | GET OUR MOBILE APP

In a two-day period ending at 8 a.m. Monday morning, rainfall amounts collected by automated gauges in the mountains ranged from .03 of an inch in Ranchita to 1.13 inches at Birch Hill, according to preliminary data from the National Weather Service.

Quarry Rd Dip closed near the 125... Crossing gates are down because of flooding #TheNow @10News 4PM pic.twitter.com/502nS79KDs

About a foot of snow had fallen on Palomar Mountain by mid-morning, prompting authorities to require that tire chains be used in the area.

A winter storm warning for the mountains is scheduled to take expire at 3 a.m. Tuesday. A wind advisory for the valleys, mountains and deserts was extended until 8 p.m. Monday. A high surf advisory for the coast will be upgraded to a warning at noon, and a coastal flood advisory will run to noon Tuesday.

"A cold Pacific storm from the northwest will move across Southern California today and into Baja tonight," according to the weather service. "Numerous snow showers will develop today and continue into early evening, decreasing tonight into early Tuesday."

Forecasters said the snow level would drop to about 4,000 feet by tonight. Up to 14 inches of snow could accumulate in altitudes of more than 5,500 feet, and up to 18 inches could fall in areas higher than 7,000 feet.

Gusty west to northwest winds of 20 to 30 miles per hour with gusts to 50 mph may blow snow across roadways in the mountains causing visibility to drop to near zero. Those who live in or are traveling through the mountains today were advised to carry tire chains, extra food and clothing.

At the beaches, the surf is expected to build to 6 to 10 feet with isolated sets to 15 feet late today through tonight.

"Very large surf will hit the beaches today through Tuesday morning. The combination of this surf, gusty winds and projected high tides of over 6 feet will threaten coastal flooding, particularly around times of high tide this morning and Tuesday morning," according to the NWS. "The threat of damaging surf and coastal flooding will diminish Tuesday."

Some piers may sustain damage and low-lying areas like beach parking lots, nearby roadways and walking paths will be at risk for flooding. The surf and strong rip currents will cause dangerous swimming conditions, and the waves be high enough to top jetties or sea walls.