Southwestern College classes to resume Friday after no threat found

A "credible threat" that forced Southwestern College to evacuate all campuses was found not to be credible, after authorities made contact with a person of interest.

CHULA VISTA, Calif. (KGTV) - Southwestern College said a "credible threat" that forced all of the college's campuses closed Thursday has been deemed not credible.

The person of interest who prompted the threat, according to campus police, was contacted later in the day. Southwestern College did not elaborate on their discussion with the student, but said campus police, Chula Vista Police, and the San Diego Sheriff's Department have determined there is no threat.

Classes at Southwestern College in Chula Vista were canceled Thursday, follow the initial reports of a threat.

Southwestern said classes will resume at all of its campuses on Friday. Those forced to evacuate from the Chula Vista campus Thursday are also being allowed to return to retrieve their vehicles left behind. They can do so by entering through the H St. entrance.

Earlier Thursday,  school officials said in a tweet: “Southwestern College will evacuate the Chula Vista campus & all its centers Thursday, Sept. 6, while Campus Police investigate a credible threat. All classes are canceled for the remainder of the day and all campuses will close. We will send updates as they become available.”

Southwestern College will evacuate the Chula Vista campus & all its centers Thursday, Sept. 6, while Campus Police investigate a credible threat. All classes are cancelled for the remainder of the day and all campuses will close. We will send updates as they become available.

SWC Superintendent/President Dr. Kindred Murillo confirmed the threat was made by a student during a press conference.

Murillo said the school was informed about the threat by Chula Vista police Thursday morning after they were contacted by family members of a student who overheard the threat.

While the alert went out through the college's text system, it didn't reach everyone. Some students were even the first to tell their teachers about the evacuation.

Some students were notified by staff and heard concern in their voices.

"You guys can go, evacuate the school, be careful," Pedro Gonzalez said.

"She said classes are canceled, but she looked very worried so like, 'Oh God,'" Noel Lopez said. He added that he kept looking over his shoulder and tried not to panic while leaving campus. 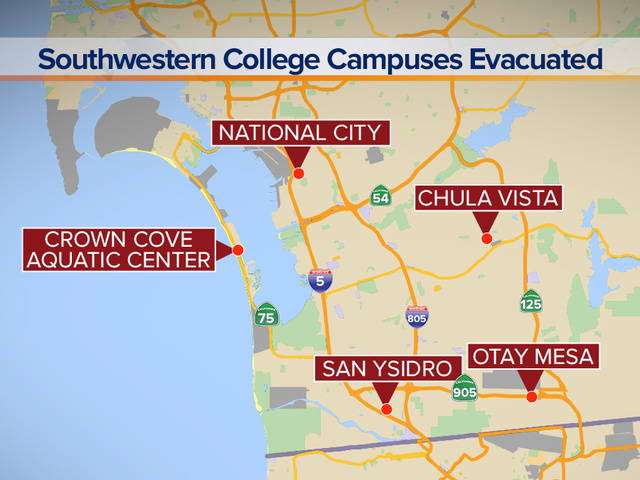 Campus police were deployed to direct traffic to facilitate the evacuation process.

Chula Vista police say officers were also at the main campus were assisting with evacuations until about 11 a.m., when they deemed evacuations completed.

A Southwestern College student says getting off campus during this morning's evacuation wasn't easy because of the traffic pic.twitter.com/9drG97HQ10

Several students at the Chula Vista campus told 10News they saw some other students run from the school after the evacuation order was announced.

"It was chaotic at the very last minute because most people don’t drive. They wait at the bus, and they just trampled each other into the bus," Lopez said.

Luna said he and his friend didn't think the threat was serious so they went to the gym, "Once we got inside, we saw there was nobody inside and there were like fences inside and then the doors were locked and so we couldn’t really get out until somebody came by and opened the door."

Luna said they were stuck in there for a half hour.

President Murillo said there will be a debrief to look at how the evacuation went and what they can do to improve. She said she was proud of the students and faculty for facilitating a smooth evacuation.