A study shows Point Loma is the most dangerous for cyclists.

SAN DIEGO (KGTV) - San Diego is the most dangerous city in the county for bicyclists, with a Point Loma intersection named the most likely for crashes, a law firm reported Thursday.

EB Cycling Law crunched the numbers from seven years of San Diego County bicycle crash data. From 2010 to 2016, there were almost 7,000 bicycle crashes. Fewer than 200 of the crashes did not lead to an injury, according to the report.

The intersection of Midway Drive and Rosecrans Street was named the most dangerous for bicyclists due to its heavy congestion, multiple lanes of traffic, several turn lanes, and lack of bike lanes.

"Most of the most dangerous intersections did not have bike lanes.  If they did have them, they weren't adequate.  They are narrow or not colored.  We know from studies that simply painting a bike lane can greatly reduce injuries," said Mike Bomberger, an avid cyclist and attorney at EB Cycling Law. 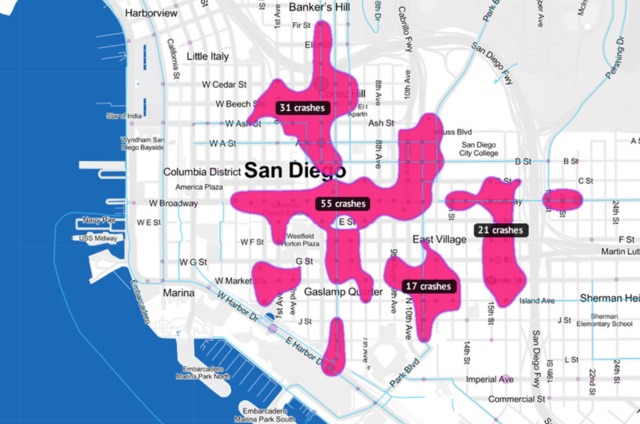 San Diego was the worst city for bicycle crashes, with 3,514 in the six-year period. 27 of the crashes were fatal. Chula Vista was second with almost 450 crashes.

Of the 50 most dangerous intersections in San Diego, 30 were in San Diego, five in Escondido and Chula Vista, four in Oceanside, three in Santee, and one each in Coronado, Encinitas, and Solana Beach. Fiesta Island had a high number of bicycle crashes, but the area does not have any intersections.

The most likely time of day for crashes was between 3 and 6 p.m. The study showed a daily increase starting at 6 a.m. with a decline by 8 p.m.

The study recommended a Class IV bikeway to lower the number of bicycle crashes. The bikeway would be physically separated from traffic using a strategy such as concrete barriers or pylons.

On Thursday, a city environmental committee voted to adopt implementation plan for the City of San Diego Bicycle Master Plan which was created in 2013. Although the plan would add more bike lanes, it did not call for any Class IV bikeways.