SAN DIEGO (KGTV) -- Residents of San Diego County are still disposing of more waste than the average Californian, according to a report by the research group Equinox Project at the Center for Sustainable Energy.

According to the report, San Diego continues to dispose of more waste per capita than any of the other major urban counties throughout the state.

The latest numbers, which came out in 2016, show that each San Diegan tossed out an average of 5.5 pounds of trash per day in 2016.

Within San Diego County, residents in Del Mar disposed of the most trash at 16.5 pounds per capita.

Residents of Imperial Beach, however, disposed of the least trash at 3.3 pounds per person followed by Chula Vista at 3.7 pounds per capita.

Residents of within the city of San Diego disposed of 5.9 pounds of waste per person per day.

The numbers below show how much trash per capita jurisdictions around the county disposed of: 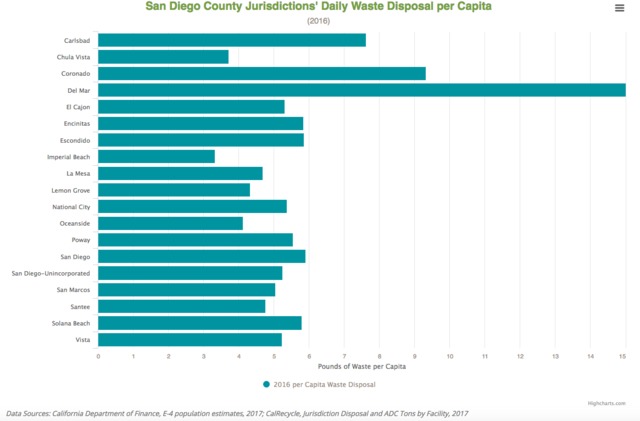