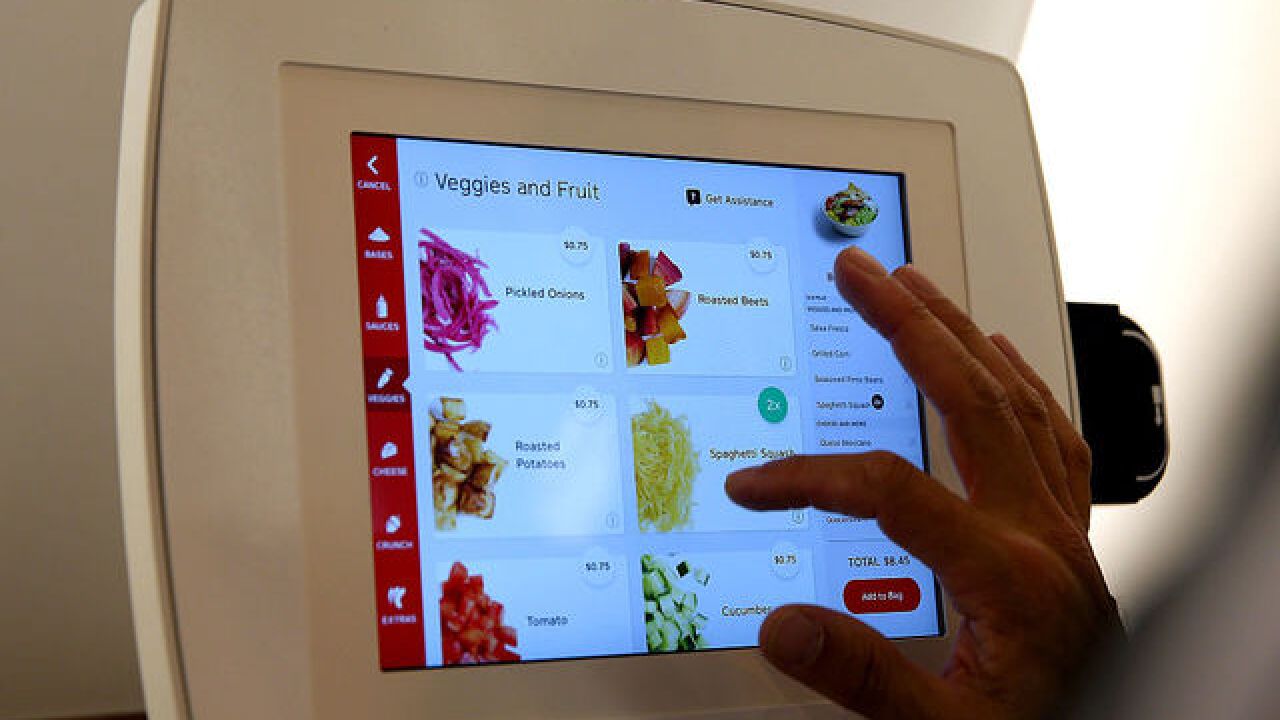 Copyright Getty Images
Justin Sullivan
<p>SAN FRANCISCO, CA - AUGUST 31: Customers place their orders at an interactive kiosk and then pick their orders at eatsa , a fully automated fast food restaurant on August 31, 2015 in San Francisco, California, a first of its kind automated food pick-up system that features a collection of glass door &quot;cubbies&quot; with a door that displays personalized graphics and presents the food at the touch of a button. (Photo by Justin Sullivan/Getty Images)</p>

SAN DIEGO (KGTV) - San Diego-based Jack in the Box may ramp up the presence of self-serve kiosks in their fast-food locations as opposed to actual employees.

The possibility "just makes sense," according to Jack in the Box CEO Leonard Comma, who brought up the issue Tuesday during an investment conference in Orlando, Fla., Business Insider reported.

"I'm kind of old school. I like talking to the employees," Hugo Perez said outside of Hillcrest's Jack in the Box. "It's kind of cool but it'll soon be like that Wall-E movie. We don't want to move or talk to anyone."

10News reached out to Jack in the Box. The company released a transcript of Comma's comments from the speech:

“When we look at service, it’s impacted by what happens in the back of the house. We tried many things in the back of the house, and also technology in the front, over the last handful of years that just wasn’t the right time to put them in play, mainly because we weren’t seeing the return on that investment.  But as we see the rising costs of labor, we’re seeing that some of the things we tested back in the day may have a home going forward.

“We’ve tested kiosks, and we saw that average check within the kiosk purchases in the dining room were higher and it was a pretty efficient way for us to serve those guests. But, again, at the time the cost benefit – you know, balance – wasn’t there. We’ll take a re-look at that.”

“With the rising cost of labor, it just makes sense that we work hand in hand with our operators to make sure that the four-walls economics still make sense for them over the long term.”

Jack in the Box has tested self-serve kiosks in the past but said they were too expensive to install on a large scale. Comma said California's raising minimum wage has forced the company to reconsider, Business Insider reported.

The transition to self-serve kiosks at fast-food chains isn't new.

For the last two years, chains have announced plans to add the technology to locations, including Wendy's, Subway, and McDonald's.

Comma's comments come as Walmart announced it would raise base pay to $11 an hour in February due to the recently passed tax law. The retail giant also said employees would receive a one-time bonus of up to $1,000.

Recently, Jack in the Box also announced it will sell its Qdoba fast-casual Mexican food chain to Apollo Global Management LLC for $305 million. That deal is expected to close in April 2018.

There are 101 Jack in the Box locations in San Diego County.