In this week's crime, the girl was walking to Mira Mesa High School on Flanders Dr. at 6:30 a.m. when the man approached her.

Police said the two had a conversation then the man sexually assaulted the girl. He ran away northbound through a residential complex.

Investigators believe the man may be also involved in a sexual assault involving a 15-year-old girl on October 12. 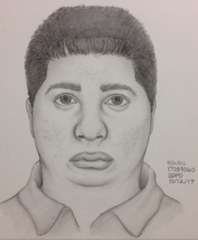 Officers released the same composite sketch in the latest case to see if anyone recognizes the man.