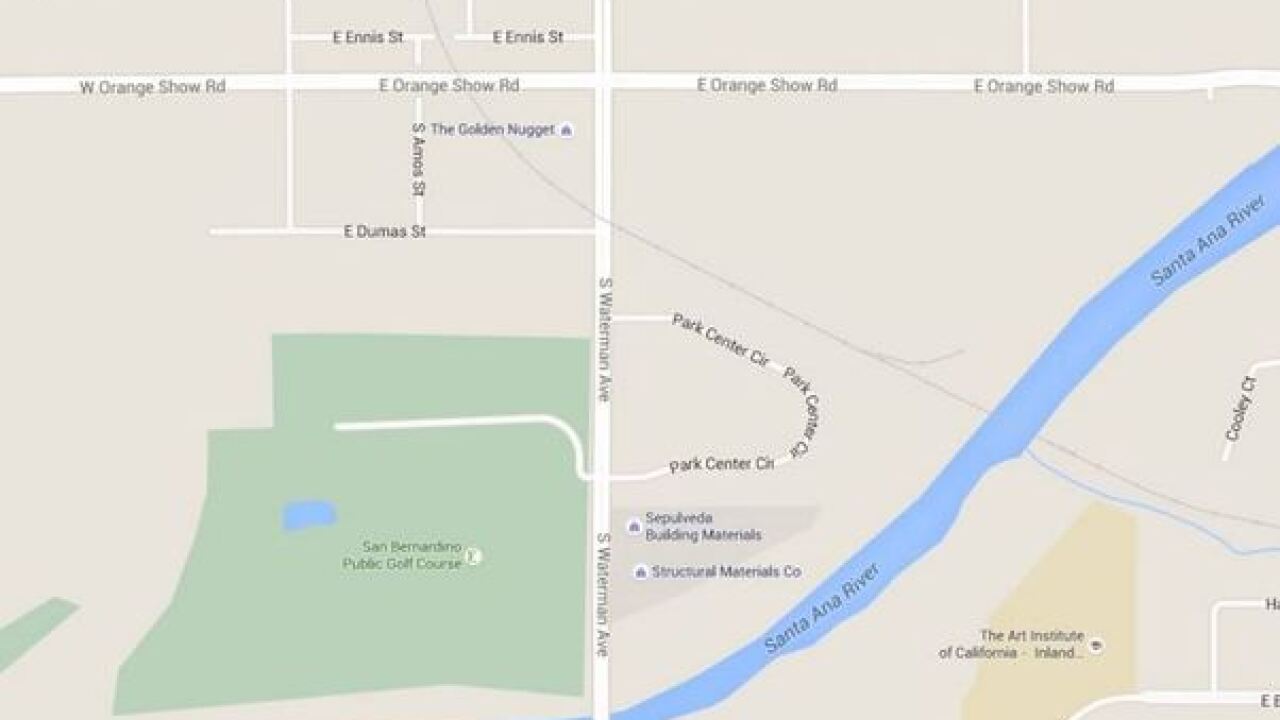 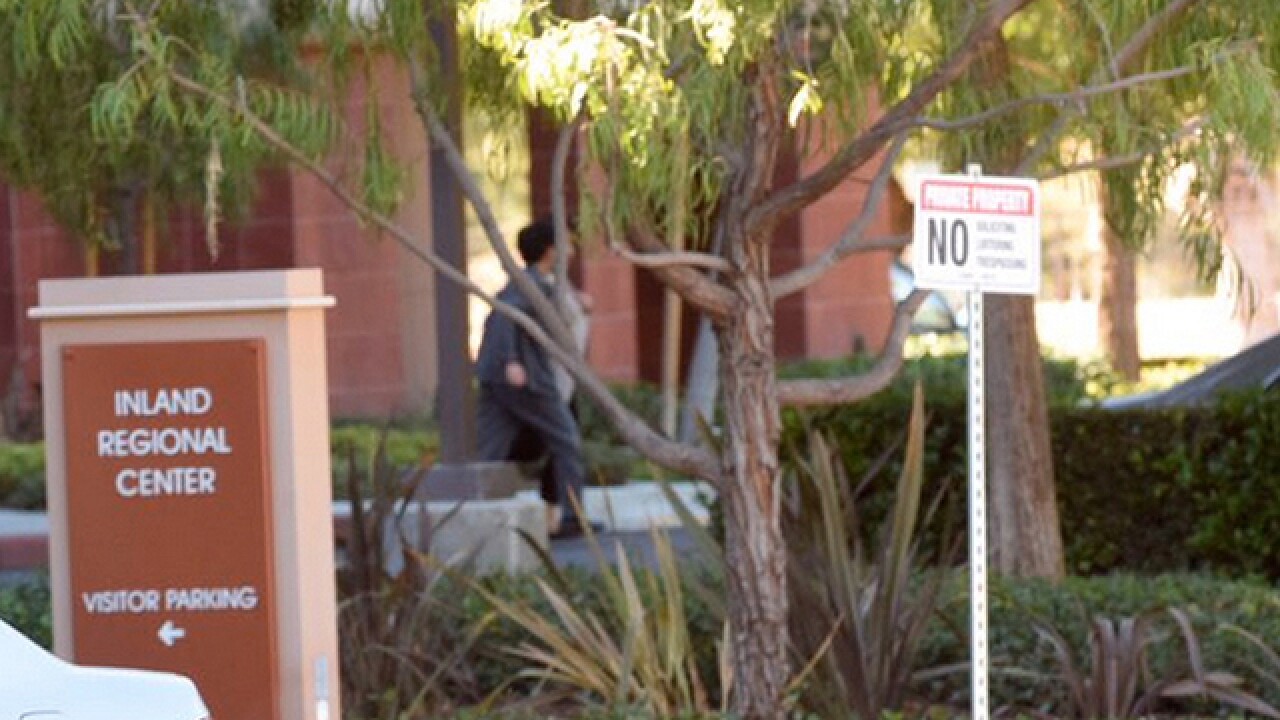 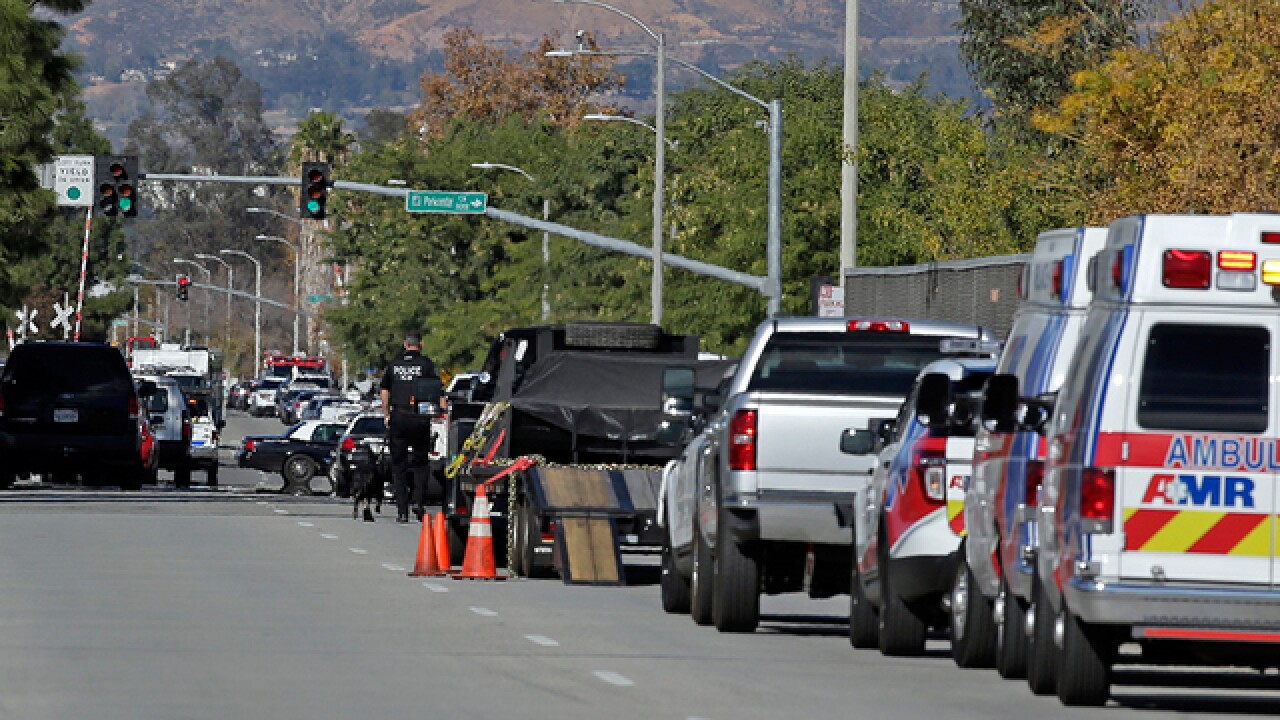 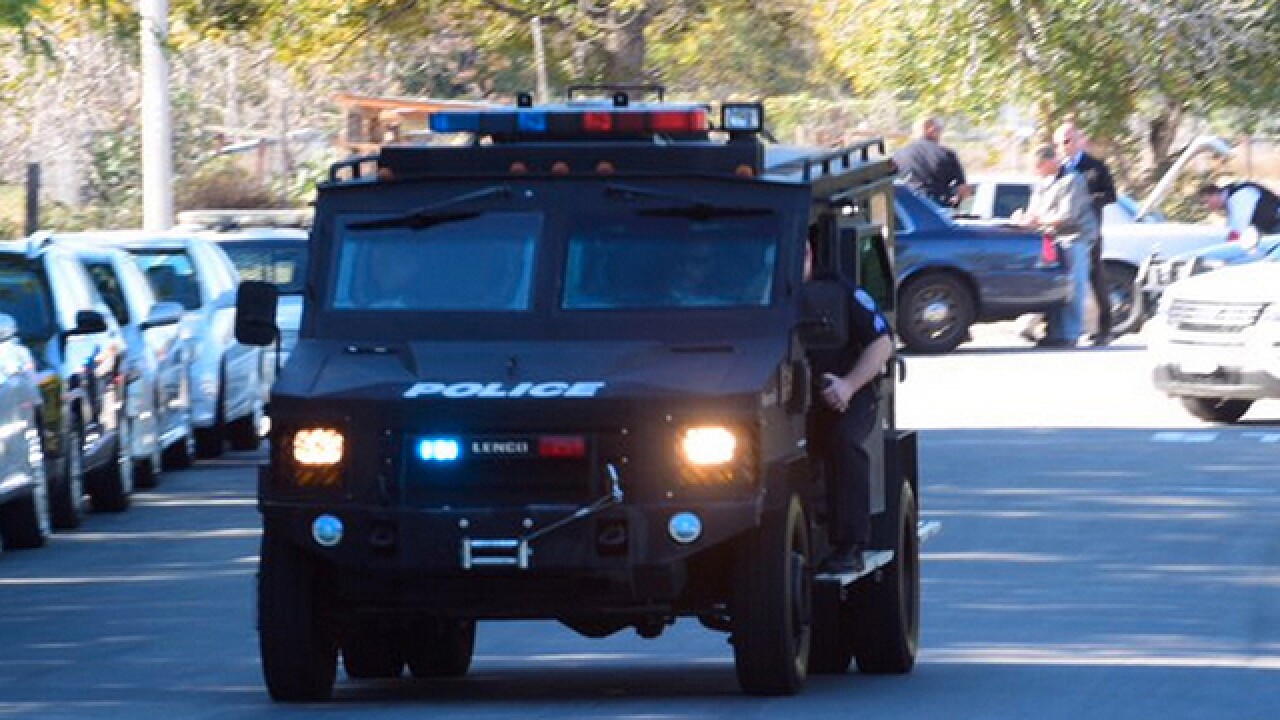 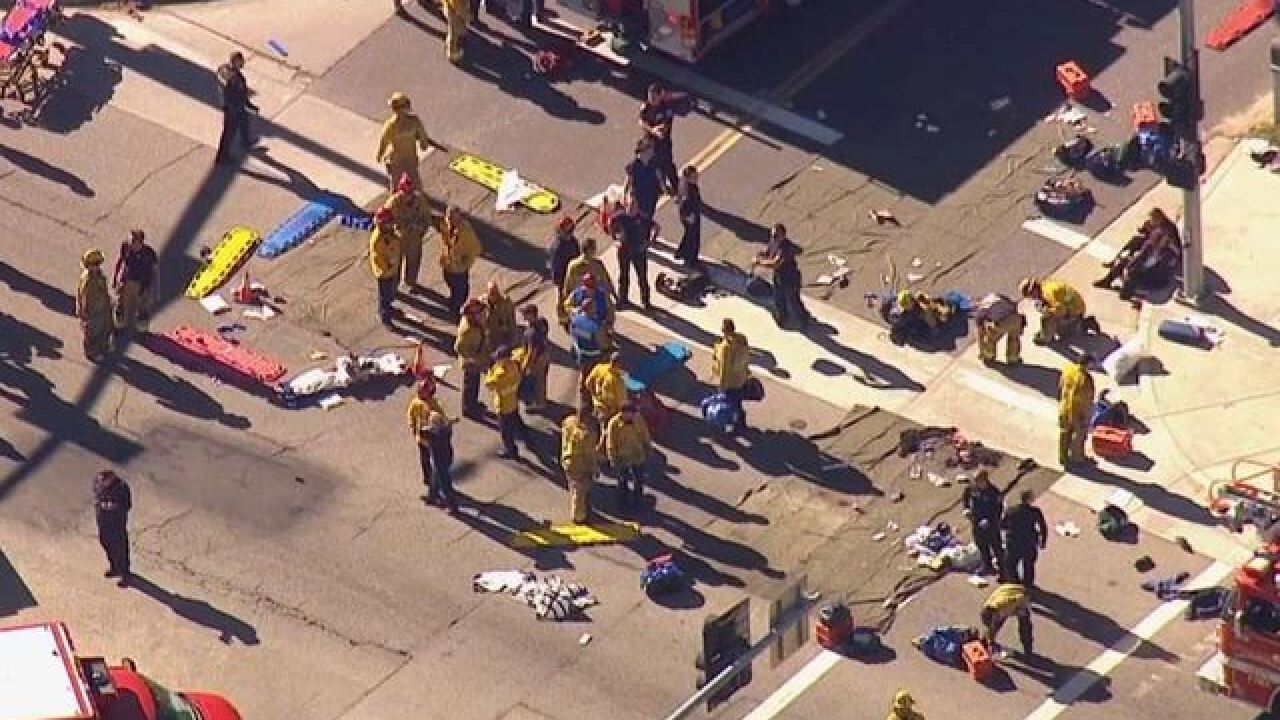 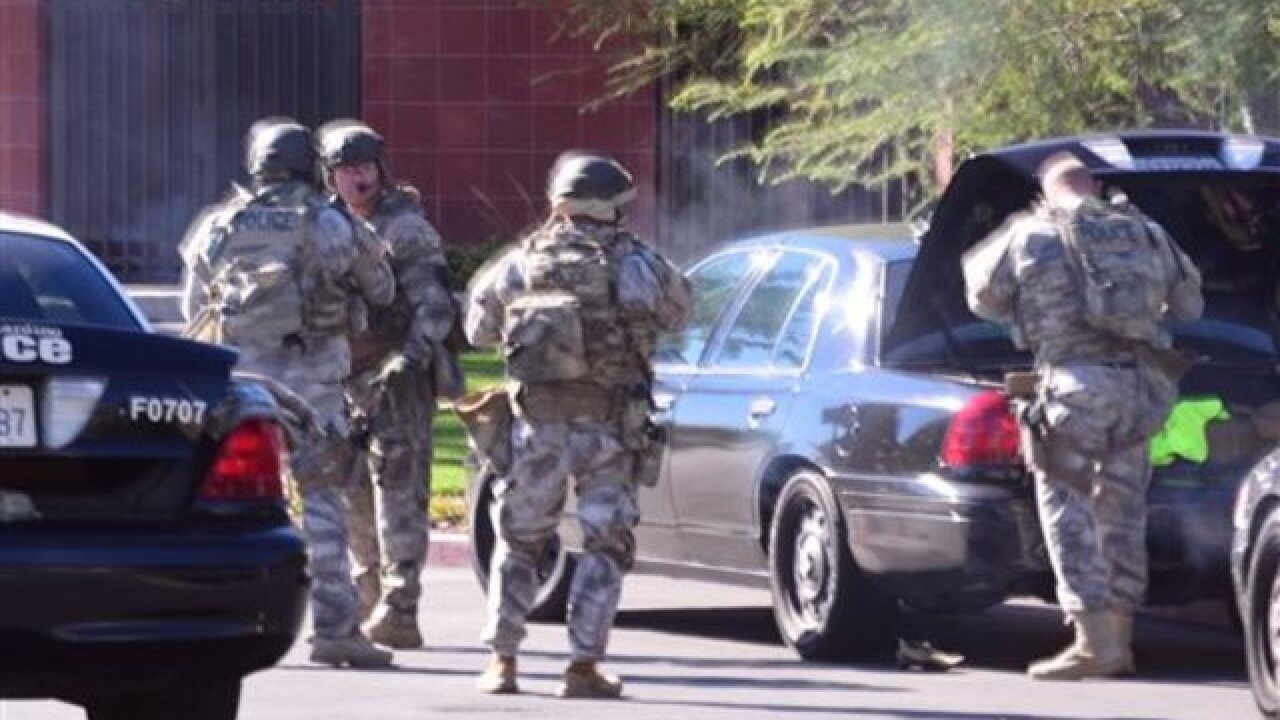 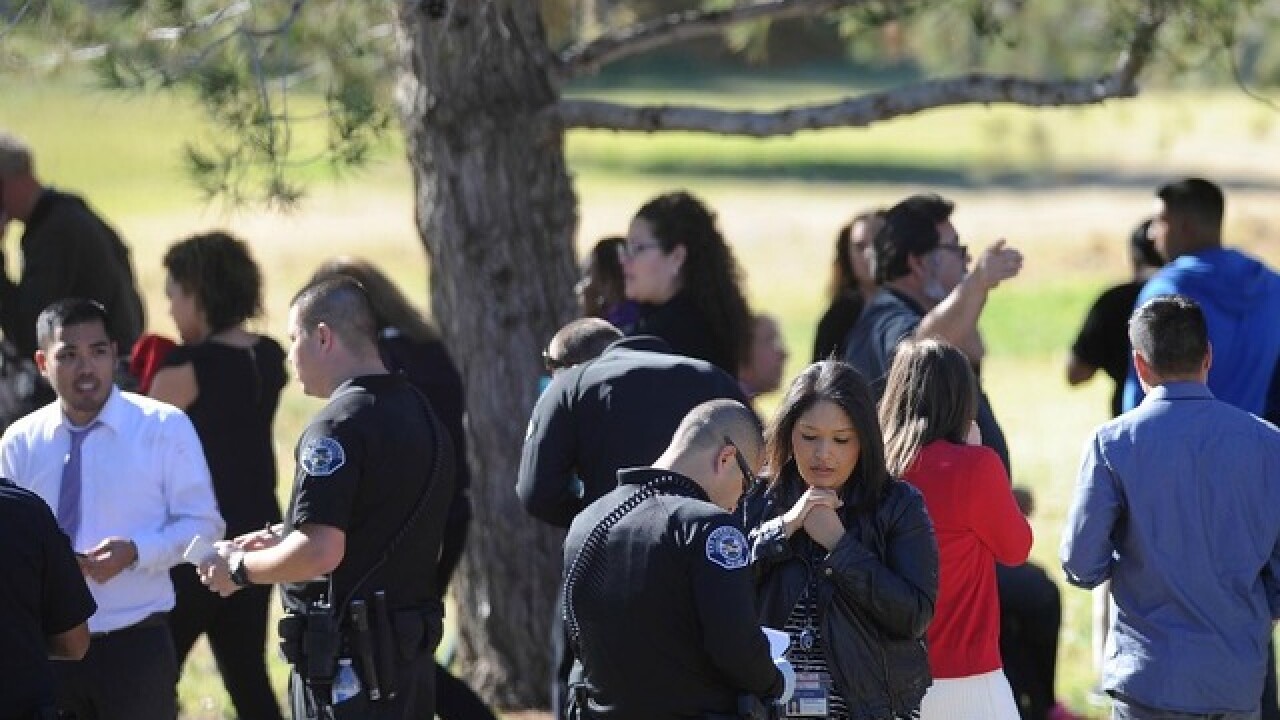 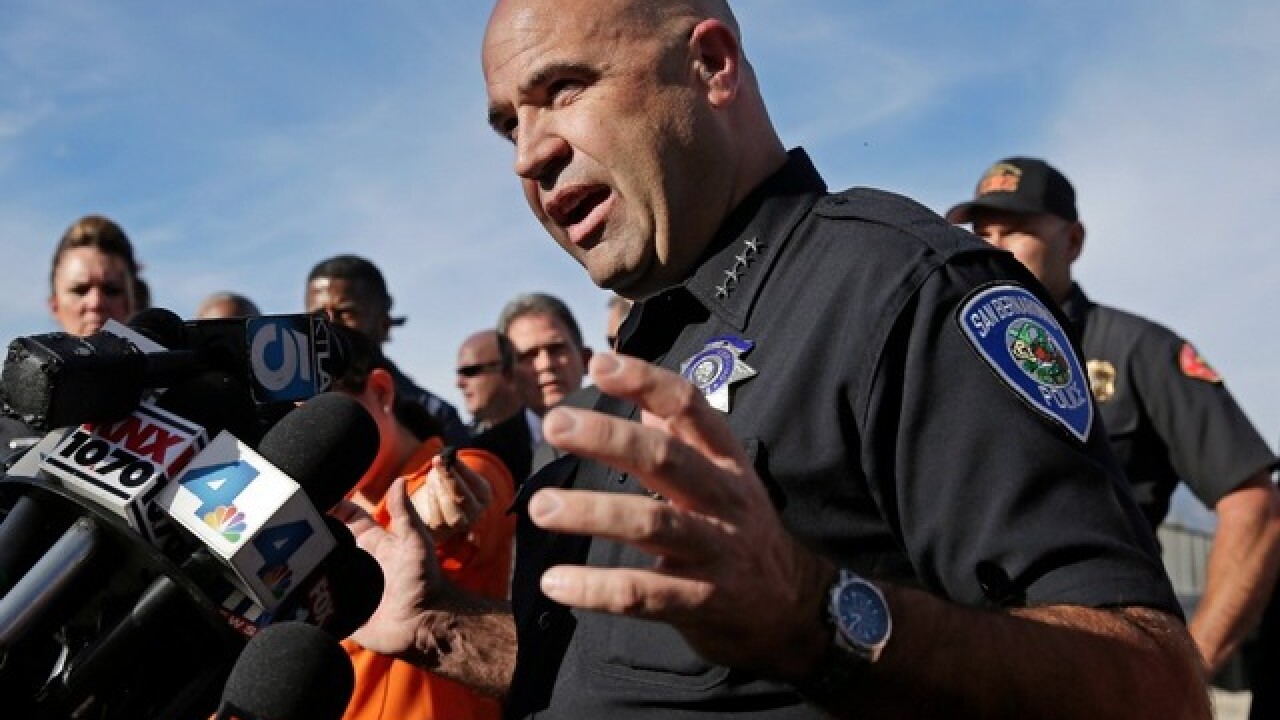 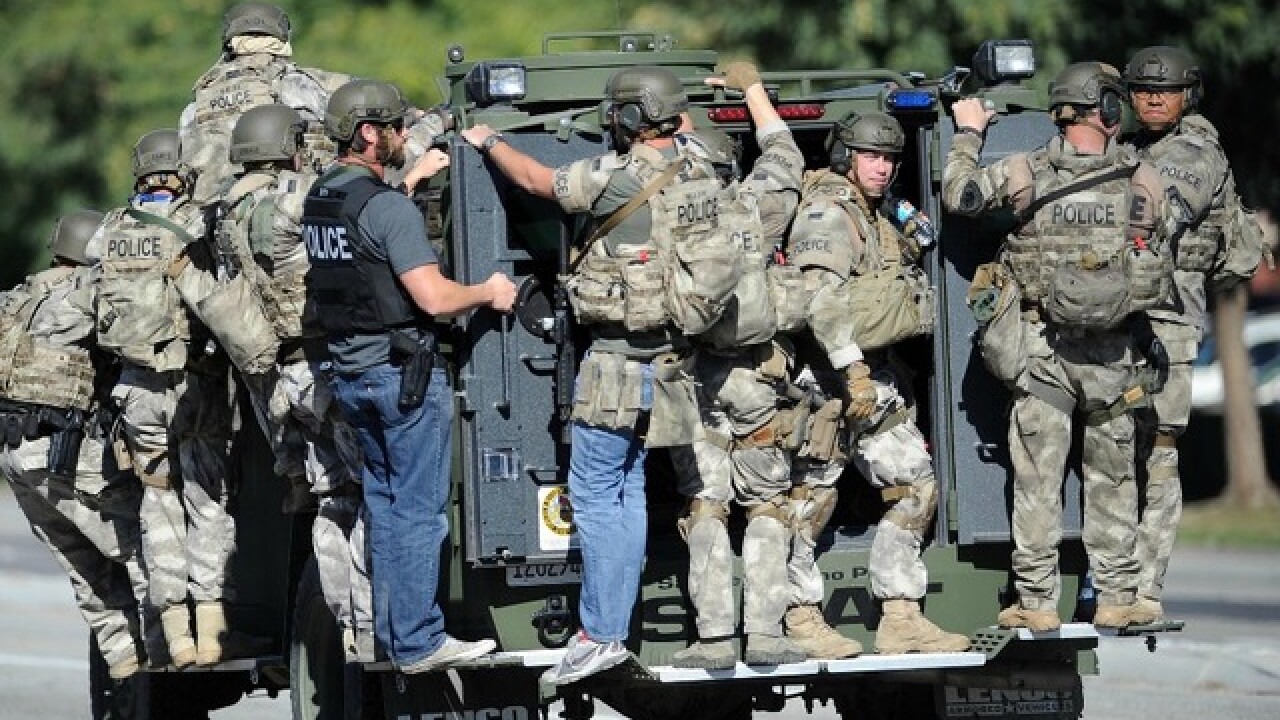 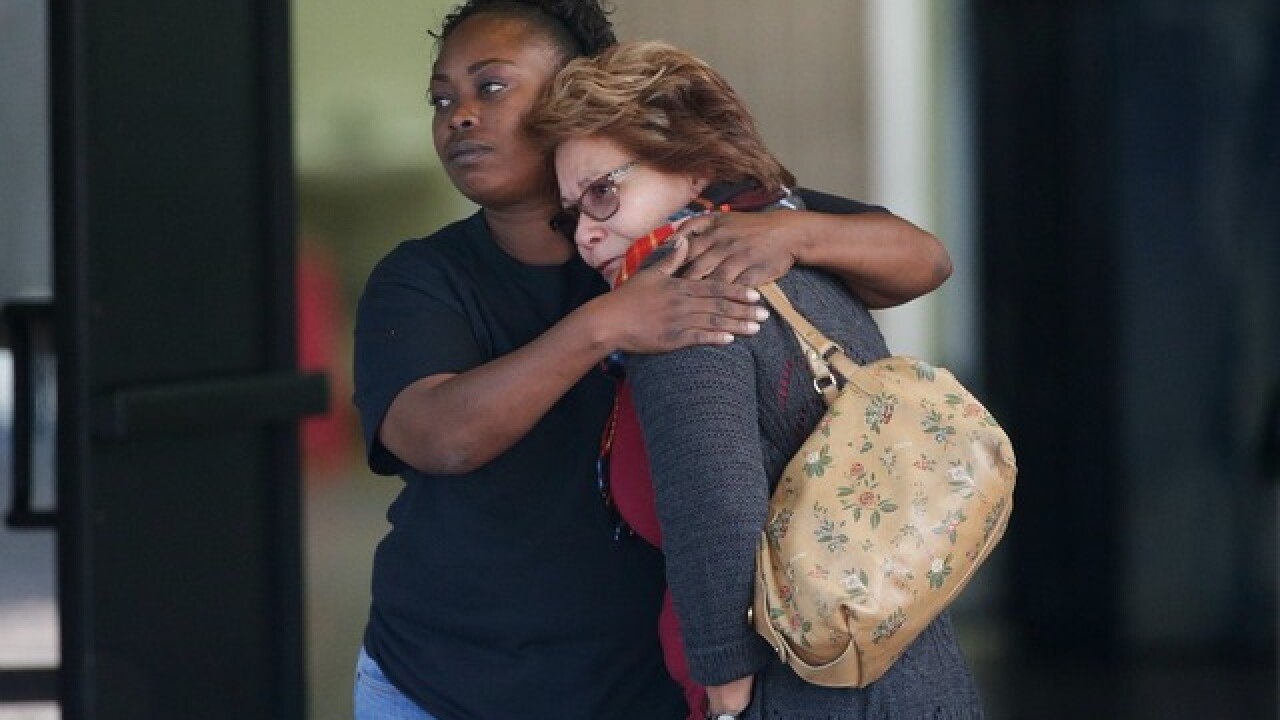 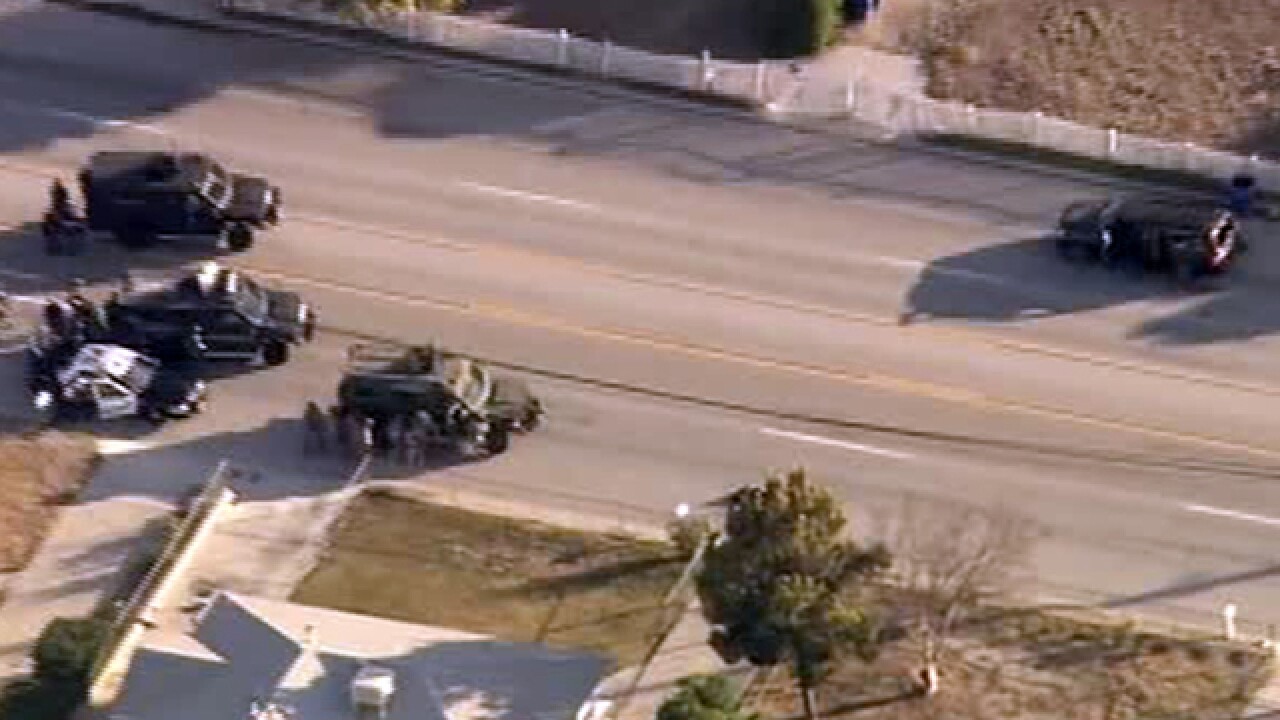 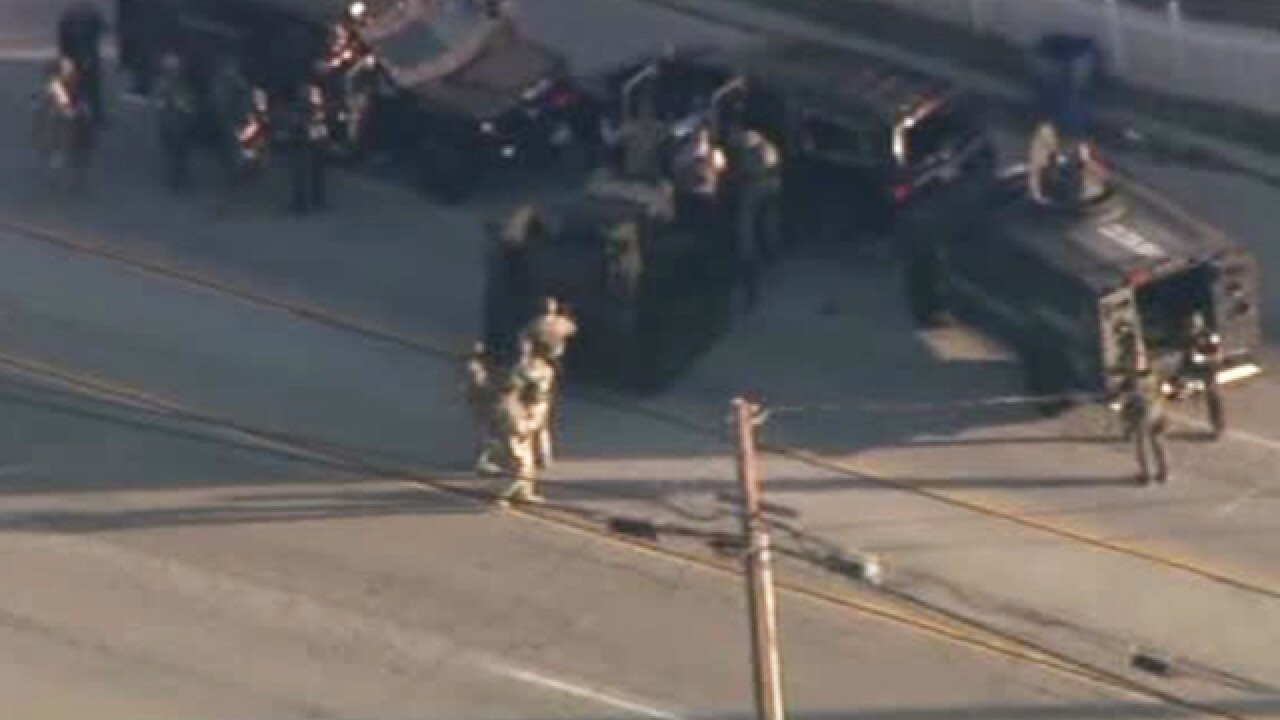 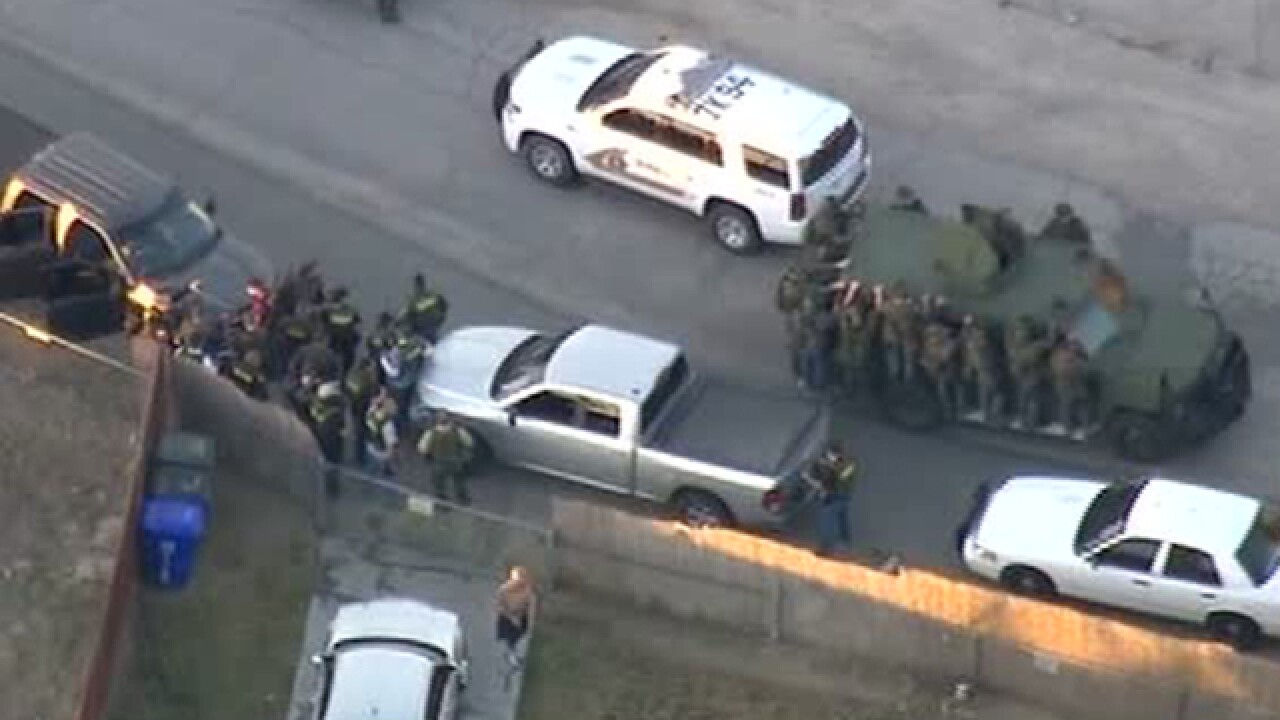 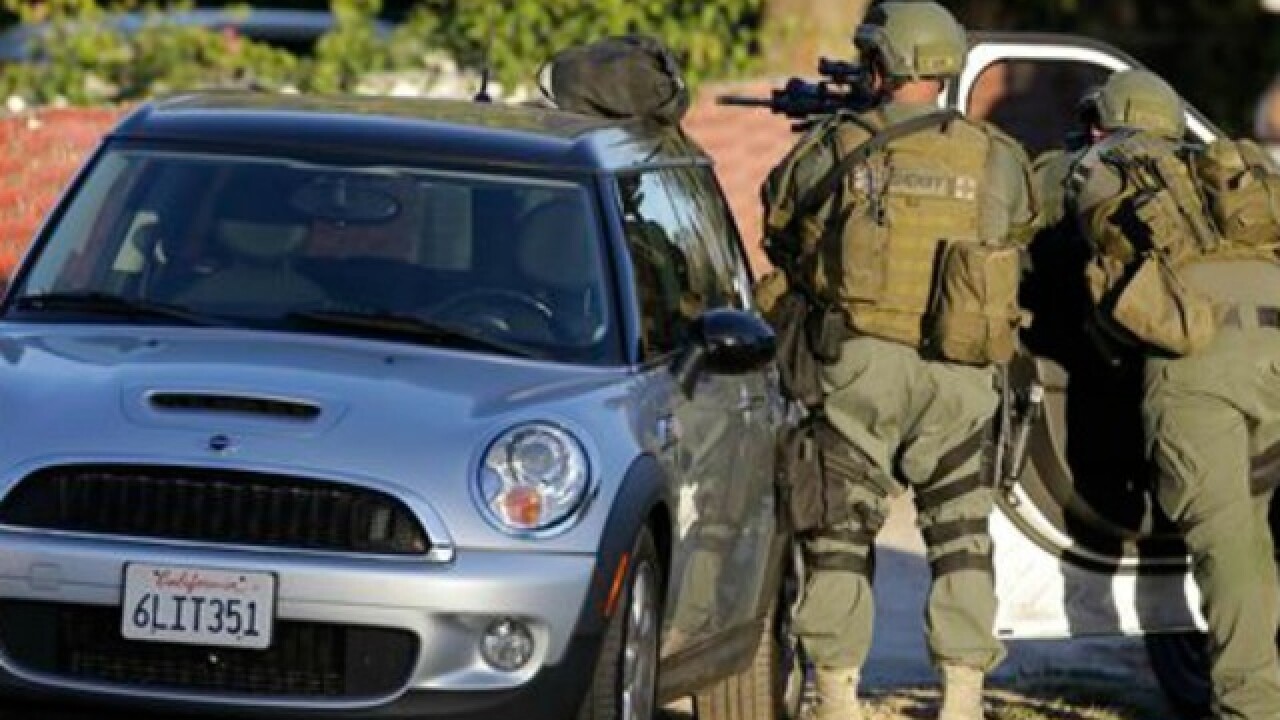 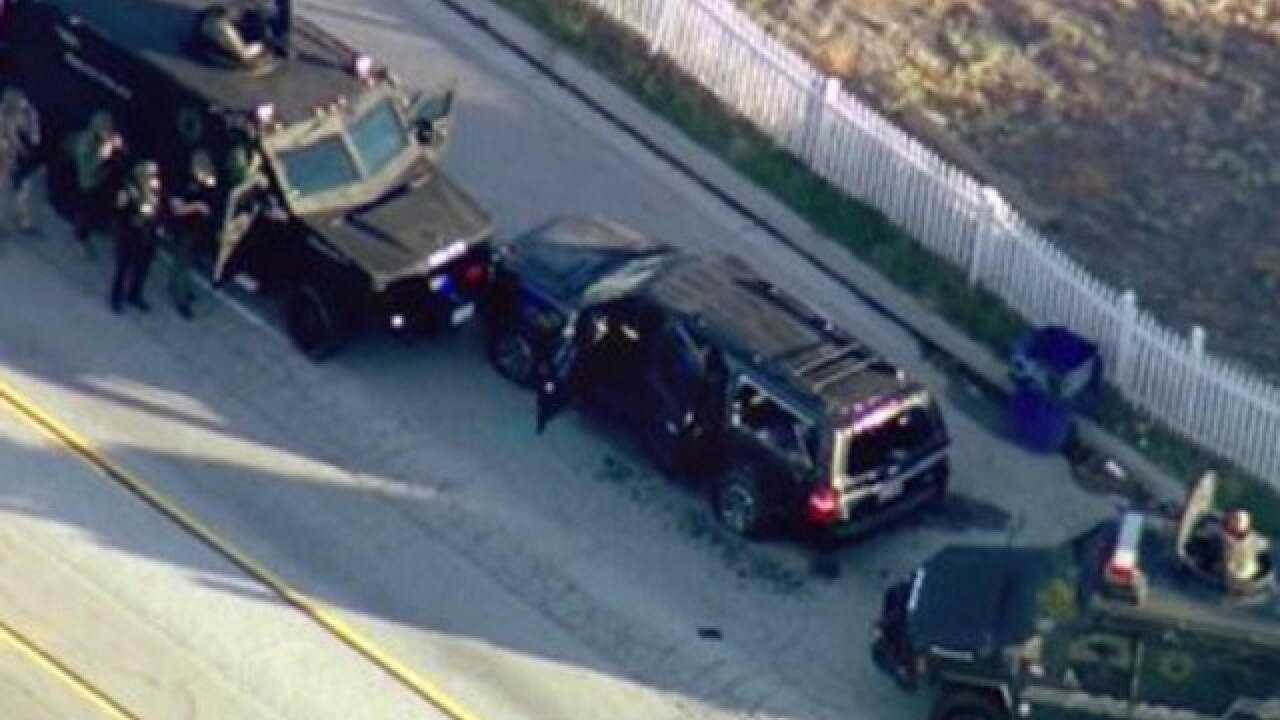 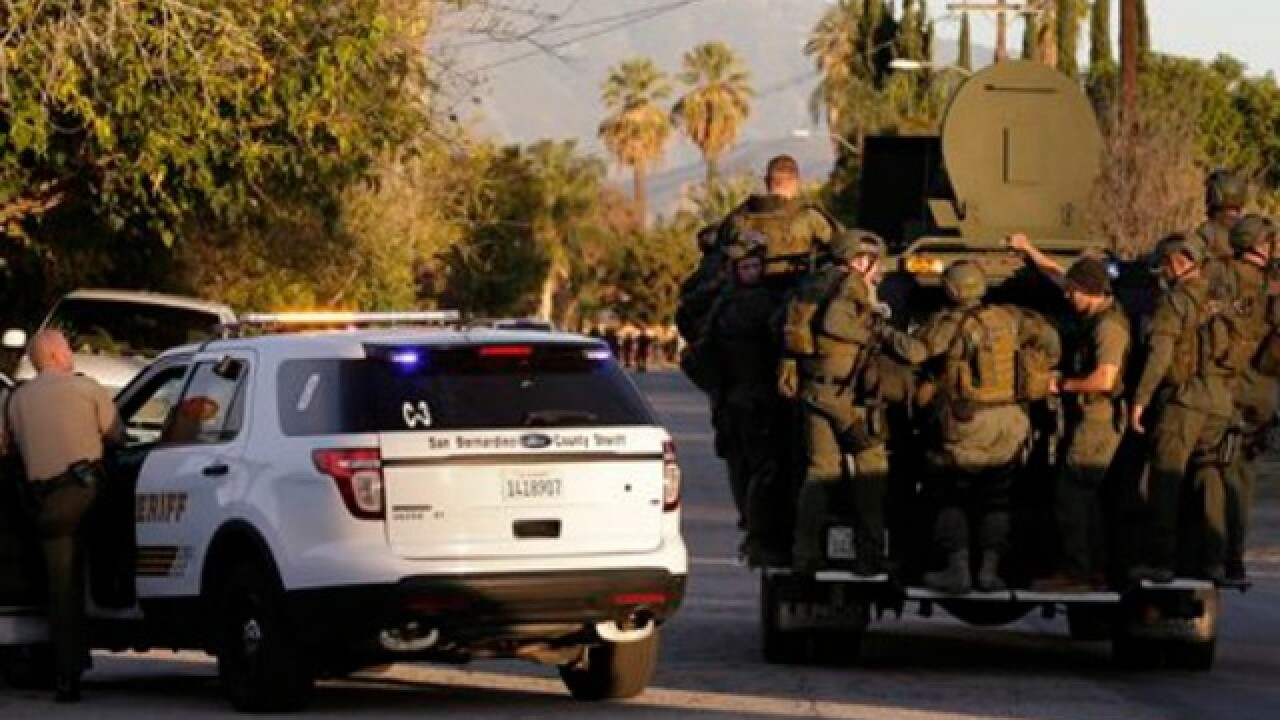 LATEST - (10:55 p.m.) The suspect in the Southern California shooting that left 14 dead traveled to Saudi Arabia earlier this year and returned with a wife.

Co-worker Patrick Baccari says Syed Farook was gone for about a month in the spring. When he came back word got around Farook had been married, and the woman he described as a pharmacist joined him shortly afterward. A baby followed.

Baccari says the reserved Farook showed no signs of unusual behavior, although he grew out his beard several months ago.

Baccari said he been sitting at the same table as Farook at an office party Wednesday morning, but his co-worker suddenly disappeared, leaving his coat on his chair.

Baccari said he had stepped into the bathroom when the shooting started and suffered minor wounds from shrapnel slicing through the wall.

(10:10 p.m.) Police say they believe the man and woman killed in a gun battle with police after Wednesday's mass shooting were the only two shooters.

The other suspect was previously identified as 28-year-old Syed Farook. Relatives have said the two were married.

Farook was an environmental specialist with the county health department who sometimes worked at the Inland Regional Center in San Bernardino.

Hussam Ayloush, executive director of the Council on American-Islamic Relations, says the couple left their baby with family Wednesday morning and never returned.

SAN BERNARDINO, Calif. - At least two heavily armed attackers opened fire on a banquet at a social services center for the disabled Wednesday, killing 14 people and seriously wounding more than a dozen others in a precision assault that looked "as if they were on a mission," authorities said.

About four hours later, police hunting for the killers riddled a black SUV with gunfire in a shootout 2 miles from the late-morning carnage, and a man and woman with assault rifles, handguns and "assault-style clothing" were killed, San Bernardino Police Chief Jarrod Burguan said.

A third person who was spotted running near the gun battle was detained, but Burguan said it was unclear if that person had anything to do with the crime.

The shooting at the social services center occurred at a holiday celebration for workers, not the disabled. It was the nation's deadliest mass shooting since the attack at a school in Newtown, Connecticut, three years ago that left 26 children and adults dead.

Police shed no light on the motive for the massacre. David Bowdich, assistant director of the FBI's Los Angeles office, said the bureau is looking at several possibilities, including workplace violence and terrorism. He did not elaborate.

Late Wednesday, a law enforcement official who was briefed on the case identified one of the suspects as Syed Farook. The official was not authorized to speak to the media about the ongoing investigation and spoke to The Associated Press on condition of anonymity.

The attackers invaded the Inland Regional Center and began shooting around 11 a.m. Wednesday. They opened fire in a conference area that the San Bernardino County Department of Public Health had rented out for an employee banquet, said Marybeth Feild, president and CEO of the nonprofit center.

"They came prepared to do what they did, as if they were on a mission," Burguan, the police chief, said.

Burguan said that someone had left the morning event after "there was some type of dispute," but investigators were not sure whether that had anything to do with the subsequent massacre in the Southern California city of 214,000 people about 60 miles east of Los Angeles.

As gunfire echoed through the large three-building complex, several people locked themselves in their offices, desperately waiting to be rescued by police. Some texted or telephoned their loved ones and whispered to them what was going on.

"People shot. In the office waiting for cops. Pray for us. I am locked in an office," Terry Petit's daughter texted him.

Petit, choking back tears as he read the text for reporters at the scene, said his daughter works at the center, where social workers find jobs, housing and transportation and provide other services to people with disabilities such as autism, cerebral palsy and epilepsy.

Ten of the wounded were hospitalized in critical condition, and three were in serious condition, Fire Chief Tom Hannemann said.

That the violence happened at a place dedicated to helping people with developmental disabilities — even if they were not targeted — made it even harder for some to comprehend.

"These are all disabled kids, very disabled," said Sherry Esquerra, who was searching for her daughter and son-in-law, both of whom work at the center. "She gets all the services she possibly could for these kids. So I just don't understand why somebody would come in and start shooting."

FBI agents and other law enforcement authorities converged on the center and searched room to room for the attackers. Triage units were set up outside, and people were wheeled away on stretchers. Others were marched from the building with their hands up so that police could search them and make sure the attackers weren't trying to slip out.

They had indeed escaped. One witness, Glenn Willwerth, who runs a business across the street, said he heard 10 to 15 shots and then saw an SUV with blacked-out windows pull out "very calmly, very slowly" and drive off.

As the manhunt dragged on, stores, office buildings and schools were locked down in the city, and roads were blocked off.

About four hours later, with police looking for a dark SUV, officers staking out a home in the nearby city of Redlands saw a vehicle matching that description leave. They pursued the vehicle, the SUV crashed, and a gunbattle broke out around 3 p.m., authorities said. One officer suffered a minor injury.

The aftermath of the shootout was captured live by television news helicopters.

Each of the dead had a rifle and handgun and was wearing tactical clothing, including vests stuffed with ammunition magazines, said Agent Meredith Davis of the Bureau of Alcohol, Tobacco, Firearms and Explosives. An explosive device was found at the social service center, and during the car chase, the couple hurled a fake bomb — a metal pipe stuffed with cloth — out of the SUV, she said.

President Barack Obama was briefed on the attack by his homeland security adviser. He said it was too early to know the shooters' motives but urged the country to take steps to reduce mass shootings, including stricter gun laws and stronger background checks.

"The one thing we do know is that we have a pattern now of mass shootings in this country that has no parallel anywhere else in the world, and there's some steps we could take, not to eliminate every one of these mass shootings, but to improve the odds that they don't happen as frequently," Obama told CBS.

The shooting sounded like "an organized plot," and preliminary information seems to indicate that "this is personal, and there seems to suggest some element of revenge and retaliation," said Erroll G. Southers, director of Homegrown Violent Extremism Studies at the University of Southern California and a former FBI agent.

The social services center has two large buildings that require a badge to get in, said Sheela Stark, an Inland Regional Center board member. However, the conference room where many public events take place — including the banquet Wednesday — is usually left open when visitors are expected.

Marcos Aguilera's wife was in the building when the gunfire erupted. He said a shooter entered the building next to his wife's office and opened fire.

"They locked themselves in her office. They seen bodies on the floor," Aguilera told KABC-TV, adding that his wife was able to get out of the building unharmed.

Olivia Navarro said her daughter, Jamile Navarro, a case manager at the social service center, called her and whispered that she was taking cover in a locked room.

The daughter made it safely out of the building.