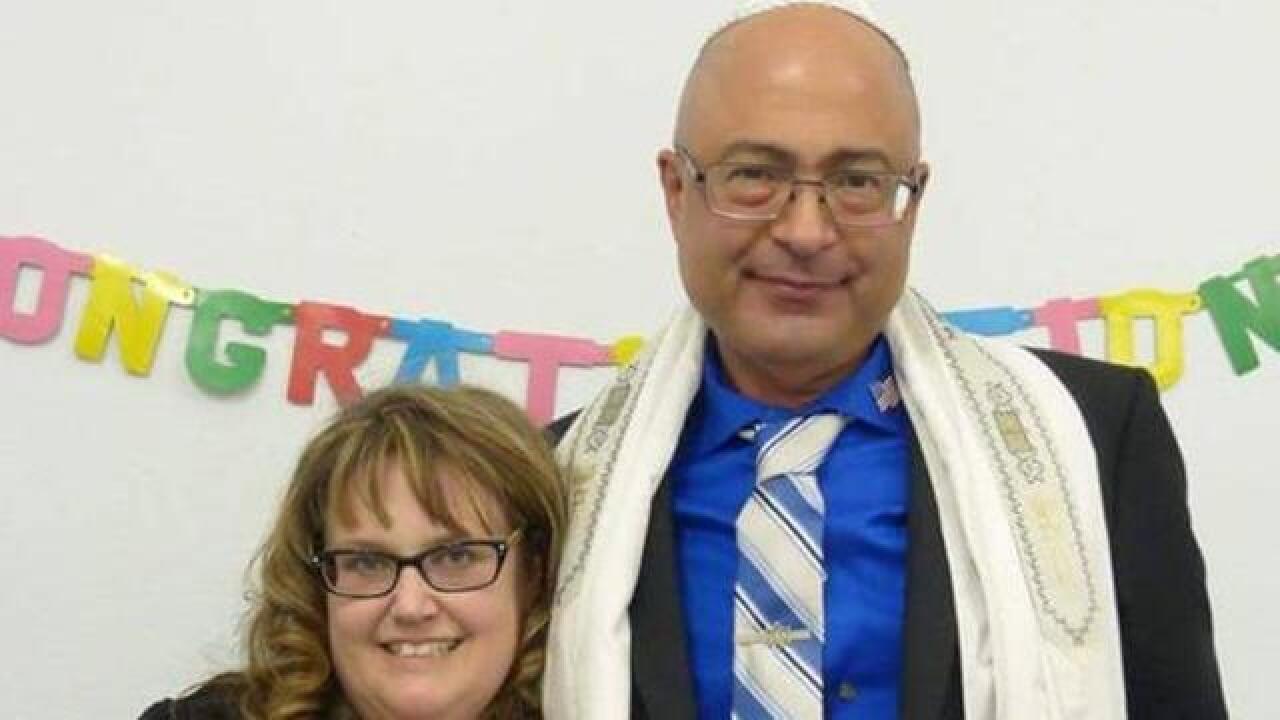 Copyright 2018 Scripps Media, Inc. All rights reserved. This material may not be published, broadcast, rewritten, or redistributed.
<p>Nicholas Thalasinos (right) in an undated photo. Thalasinos was among those killed in the San Bernardino shooting on Wednesday, Dec. 2, 2015. (Courtesy ABC7)</p> 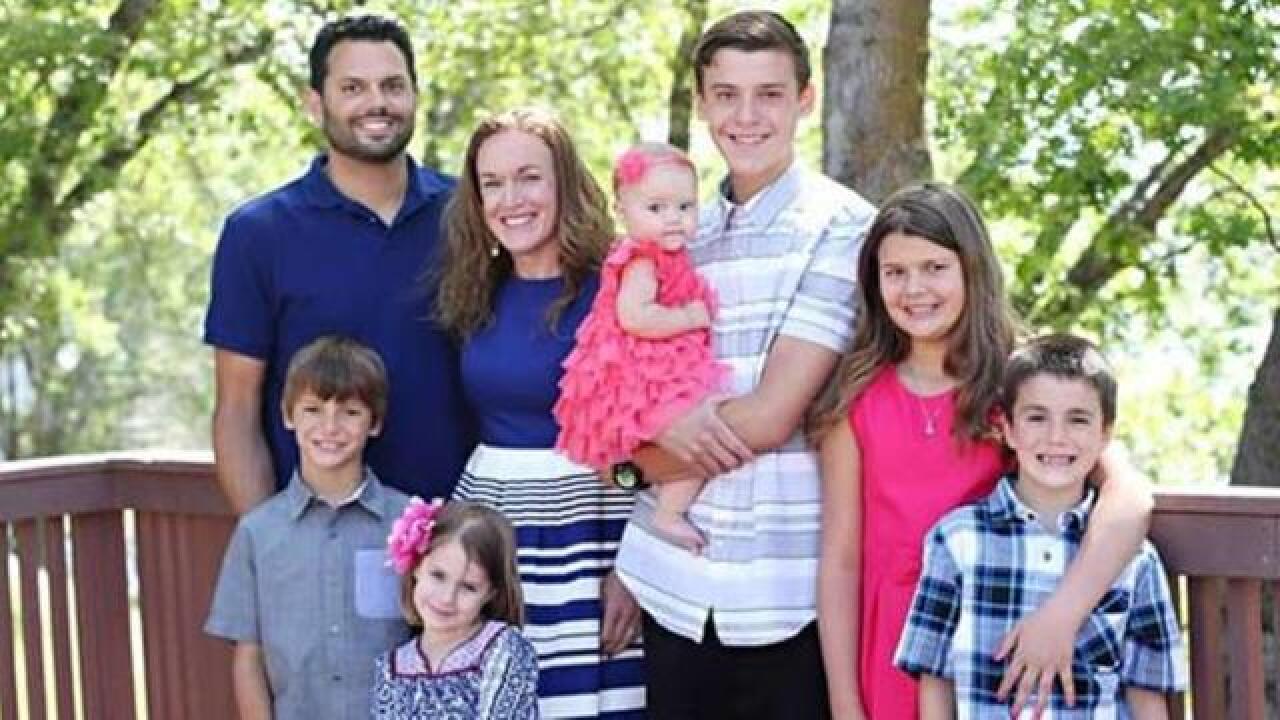 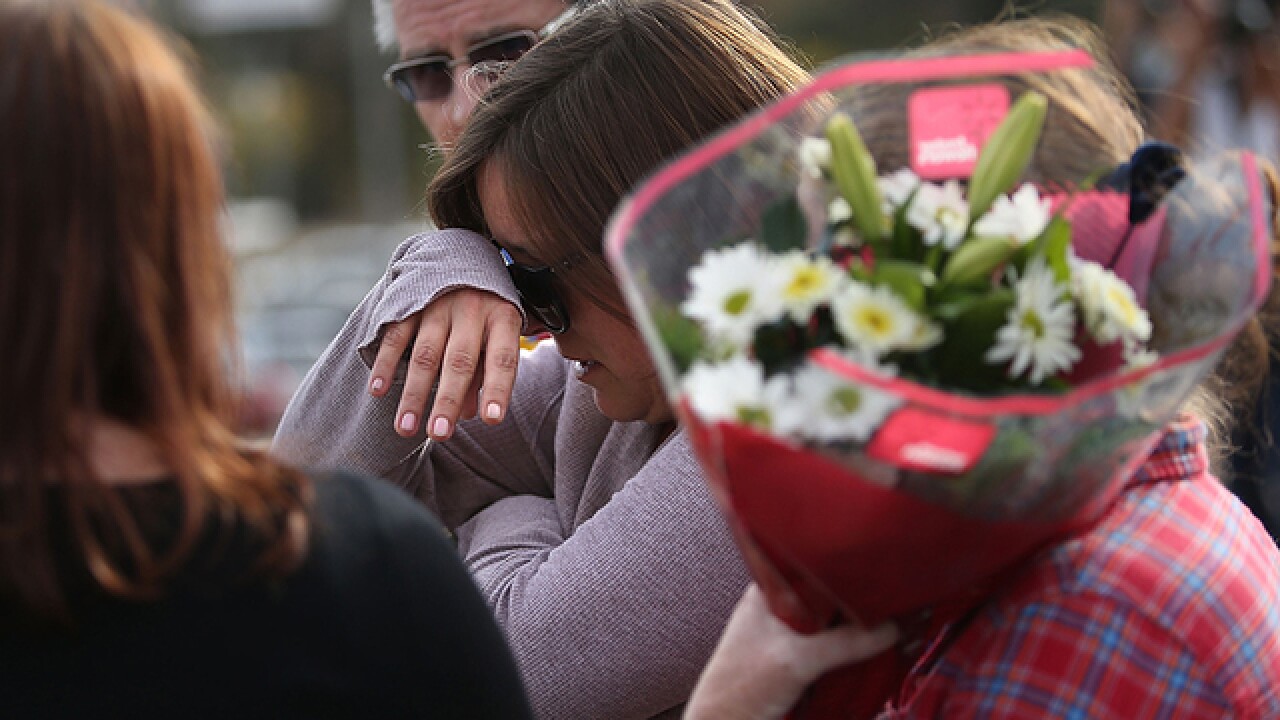 SAN BERNARDINO, Calif. -- San Bernardino County authorities have released the names of the 14 people shot and killed during a health department party.

The eight men and six women were from Southern California and ranged in age from 26 to 60. They are:

"This shooting has caused each victims [sic] family, friends and co-workers, along with the first responders, to suffer an enormous personal tragedy. We must stand strong and offer support to each individual affected by this senseless attack," San Bernardino County Sheriff John McMahon said.

A man, who worked for the county as a restaurant inspector, and his wife -- both wearing black tactical gear and wielding assault rifles -- opened fire at the center, authorities said.

Another 21 people were injured in the attack.

Note: Details on several of the victims were not immediately available

Nicholas Thalasinos, 52, identified as a Messianic Jew and passionately defended Israel, actively debating about religion in online forums and in person, his friends said. Only two weeks ago, Thalasinos was having a heated on-the-job discussion about the nature of Islam with Syed Rizwan Farook, his fellow restaurant inspector and the man police identified as the shooter.

Thalasinos' friend, Kuuleme Stephens, said she happened to call him while he was working with Farook, and that he brought her into their debate, loudly declaring that Farook "doesn't agree that Islam is not a peaceful religion." Farook countered that Americans don't understand Islam, and Thalasinos responded by saying "I don't know how to talk with him," she said.

Stephens said she didn't sense any pending violence at the time, and it is not clear if their debates factored in the attack. Stephens said Thalasinos did not believe his co-worker would ever turn violent. However, his wife Jennifer said "she believes her husband was martyred for his faith and beliefs," Stephens said.

Nicholas and Jennifer Thalasinos had recently renewed their marriage vows, and they appeared together frequently on his Facebook page.

"He was a wonderful person," said Joey Shimoni, another friend. "A great husband and just a sweet soul."

Shannon Johnson worked for nearly 11 years as an environmental health specialist at the San Bernardino County Public Health Department, according to his page on the LinkedIn networking website. He graduated from Cal State San Bernardino with a degree in health science in 2004.

Tin Nguyen was a food inspector with the county Public Health Department. Relatives told various news outlets that she was born in Vietnam and engaged to be married, the Orange County Register reported. On Facebook, one of her friends called her "the most amazing person anyone could ever meet."

"Her heart was bigger than the sun, and her personality was addicting," her friend wrote.

"Michael was the most amazing person," Renee Wetzel said in a statement, issued through her friend Celia Behar. The couple had five children from previous marriages and one child together.

"He was my best friend and an incredible father who was loved by all. I have never known a better person. He loved his work and his family so very much. Without him, this family will never be the same. We appreciate all the love and support that everyone is showing."

Behar runs a blog for mothers where Renee Wetzel frequently posted, and she turned there to ask for prayers shortly after learning that her husband, an environmental health supervisor, could have been attacked. "My husband was in a meeting and a shooter came in. There are multiple people dead/shot. I can't get a hold of him," she wrote.

After last month's deadly shootings in Paris, she posted a vacation photo on Facebook, overlain by the colors of the French flag.

After her husband's death was confirmed, she posted a Bible passage: "When my heart is overwhelmed lead me to the rock that is higher than I."

The Lil' Mamas blog set up an online fundraiser for the Wetzel family on Thursday morning and quickly raised donations of more than $60,000.

Church of the Woods also asked its members to pray for the extended family: "Please continue to pray for Renee, his children, and his former wife Amy as they process this terrible tragedy and loss of their husband and father," the church said in a statement.

Damian Meins, 58, was passionate about serving his community, a message he took from the priests at his Catholic high school in Riverside and carried throughout his life.

Meins never strayed far from his church or its teachings, said Walter Hackett, who met Meins some 40-years ago in high school. "Service to others, helping others. He very much took that to heart," said Hackett.

"Damian was a good, good guy. Funny and smart and tall. A real quick smile, very friendly and outgoing," Hackett said. "It's a real hard hit for all of us who knew him."

Meins married his high school sweetheart, now a Catholic school principal, and they raised two daughters, one a teacher. Meins was fondly remembered as the guy who dressed up as Santa for school pictures, according to a parent's social media posting Thursday.

Meins' Facebook page, where he can be seen smiling with his family in front of the Golden Gate Bridge in San Francisco, says he studied business administration at the University of Redlands starting in 1991. In 1979, he graduated from UC Riverside. He was also retired from the County of Riverside after working there for 28 years.

In addition to working at the in the public health department in San Bernardino, Meins was an Extended Care Coordinator at St. Catherine of Alexandria School in Riverside, where he also helped kids create Christmas art projects and religious murals, Hackett said.

Meins received a Community Recognition Award for his work in Riverside, which was based on "compassion, courage, forgiveness, generosity, humility, inclusiveness, integrity, kindness, respect and service."

According to the Press-Enterprise, he was the first victim identified. A living Rosary for the Meins family was held Thursday.

Bennetta Betbadal, 46, was born in Iran in 1969 and came to the United States at age 18 to escape the persecution of Christians after the Iranian Revolution, according to a family statement on a fundraising account set up in her name.

Her cousin, Melani Betbadal, referred reporters to the statement and declined further comment.

She first settled in New York City but eventually moved to Rialto, California. She and her husband, a police officer, were married in 1997 and have three children ages 10, 12 and 15.

Betbadal graduated from California State Polytechnic University in Pomona with a degree in chemistry and took a job as a health inspector with San Bernardino County.

Her husband, Arlen Verdehyou, told The Daily Breeze that he and his wife exchanged texts at 8 a.m. Wednesday. He told her that he had withdrawn money from the bank and would do some Christmas shopping. Betbadal had recently decorated the family's Christmas tree.

She was planning to give a presentation at the annual holiday meeting Wednesday and was excited about it, the family said.

"It is the ultimate irony that her life would be stolen from her that day by what appears to be the same type of extremism that she fled so many years ago," the family said in the statement.

Sierra Claybron's friends say the 27-year-old stood out as someone who always had an encouraging word.

Timothy J. Lee remembers meeting Clayborn in a hip-hop class at the University of California, Riverside. She was active and outgoing, praising classmates when they mastered a routine.

"She always had something encouraging to say," Lee said.

After graduating in 2010, Clayborn worked jobs in retail and at a bank before landing a position at the San Bernardino County Department of Public Health. Like a number of other victims, she inspected restaurants.

Matthew Peairs, 27, a manager at Red Baron Pizza in Big Bear Lake, California, said Clayborn visited the restaurant a day before the shooting to complete an inspection.

"She was one of the nicest health inspectors that we've ever had," he said. "She talked to us like normal people, not just doing her job."

He said they discussed their holiday plans and she mentioned she was going to the department's Christmas party Wednesday.

"She was stoked about the party," Peairs said.

Word spread Wednesday among Clayborn's friends that she was missing. FBI agents later visited her family's house to tell them that she was killed in the attack.

"It's definitely going to be different without her," Lee said.

Yucaipa resident Robert Adams, 40, was known as a loving father and husband who married his high school sweetheart, friends said.

A fundraising page for his wife, Summer, and 20-month-old daughter, Savannah, had raised thousands of dollars in several hours Thursday.

Megan Neforos, who set up the page, said she knew Adams' wife through a Facebook group for mothers of young children.

"He was her high school sweetheart. This is tragic for her," she said. "He was an incredibly loving father and devoted husband."

Daniel Kaufman, 42, ran an independently owned coffee shop inside the Inland Regional Center where the county health workers were using a hall for their holiday banquet. The shop's workers included people with developmental disabilities, which can include epilepsy, autism and intellectual disabilities.

Eileen Richey, the executive director of the Association of Regional Center Agencies, said his death "fills us with sorrow, knowing so many families are in mourning."

Kaufman, of Rialto, was an avid participant in the Original Renaissance Pleasure Faire in Southern California each spring, said friend Katherine Panowicz, who had known him for 15 years.

She said he typically participated in parades, carrying either a pennant or a lance on a make-believe horse. The fair community is devastated to lose a friend with such a big smile, she said.

"It would change the entire environment of a room just because he had a big brilliant smile," she said.

San Diego State alumni and current New York Giants safety Nat Berhe announced Thursday his cousin was one of the victims killed in the mass shooting.

Around 10 a.m., Berhe announced via Twitter he received word one of his cousins had died.

Just got word that one of my cousins was among the 14 killed yesterday, I'm so sick right now.

Berhe -- who grew up in San Bernardino -- also posted a map to his Twitter account Wednesday as the attack was unfolding showing the close proximity of his parents' office building to the IRC.

"The true terror is that this keeps happening," he wrote. "I still can't believe it. Take a moment to think of the families hurting right now."

Berhe later identified his cousin as Isaac Amanios, of Fontana. He called his 60-year-old cousin "a great human being."

Authorities say the husband-and-wife attackers fired 75 rifle rounds in the assault, left behind three rigged-together pipe bombs with a remote-control device that apparently malfunctioned, and had over 1,600 more bullets with them when they were gunned down in their SUV.

Hours after the attack, the couple was shot to death in their rented vehicle in a furious gun battle with police. During the shootout, the couple fired 76 rounds, while law officers unleashed about 380, police said.