Powerball prize up to $1.5B, could grow 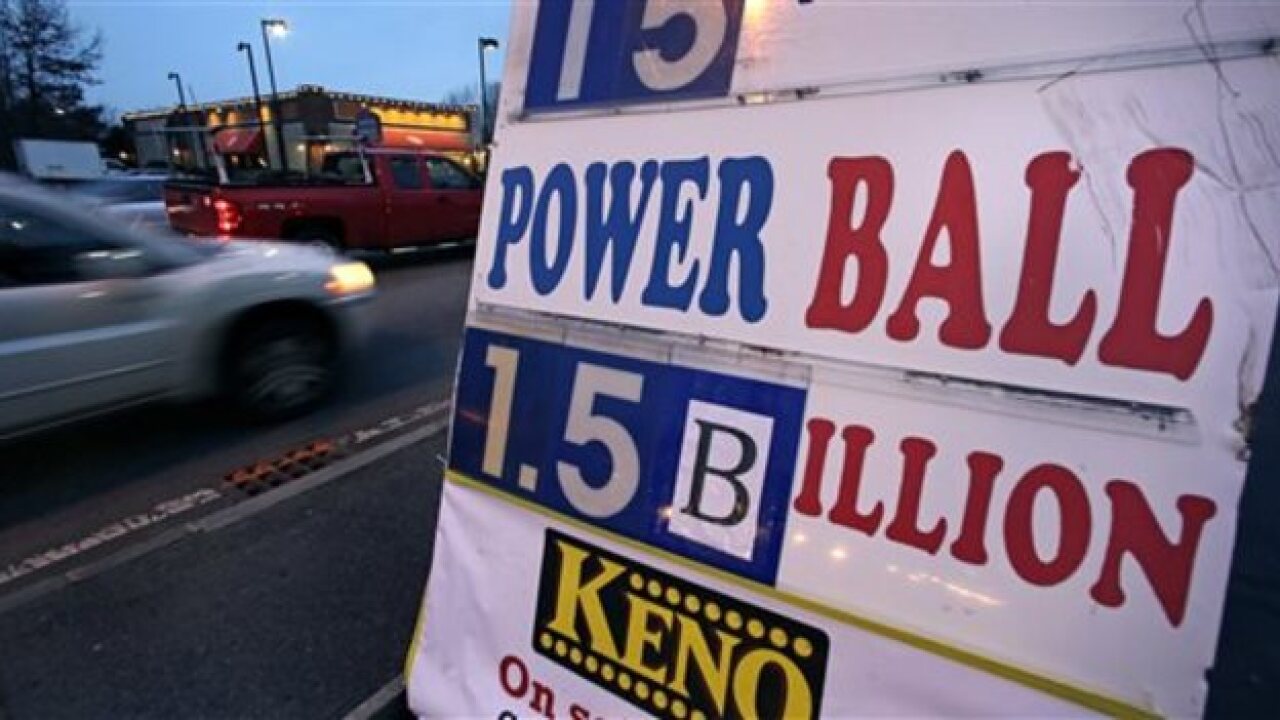 By: Associated Press
Posted at 7:36 AM, Jan 13, 2016
DES MOINES, Iowa -- The largest lottery jackpot in the world is up for grabs in the latest Powerball drawing.
The prize has climbed to an estimated $1.5 billion, easily surpassing all other lotteries. The jackpot estimate is reviewed daily, so it could increase before Wednesday night's drawing if ticket sales continue to exceed expectations.
The jackpot for the twice-weekly game started at $40 million on Nov. 4. No one has matched all six Powerball numbers since then, so the prize kept growing.
Lottery officials expect at least 80 percent of the 292.2 million number combinations will be purchased before the drawing.
No one matched all six Powerball numbers Saturday night, leading to the current enormous prize.
The huge jackpot has forced many convenience stores to bring in extra clerks to keep lines moving, hoping that people wanting Powerball tickets will decide to also buy a snack or something else in the store.
"When the jackpots get big like this, it creates a frenzy," said Brian Johnson, vice president of finance at Casey's General Stores, which runs 1,900 stores in 14 states.
QuikTrip spokesman Mike Thornbrugh said the lottery crowd can really wear out clerks if the lines are constant, so the chain of more than 700 stores will have extra staff Wednesday.
He said QuikTrip stores have been busy for nearly two weeks since Powerball's jackpot first climbed into ridiculous levels.
"It's been fun, but somebody needs to win," Thornbrugh said.
The odds of matching all six numbers to win the jackpot are one in 292.2 million.
The $1.5 billion prize would be paid in annual payments over 29 years. Or the winner could opt for a lump-sum payment of $930 million.
Whoever wins will have to pay 39.6 percent of the prize in federal income taxes, and any state taxes. Lottery officials expect at least 80 percent of the 292.2 million number combinations will be purchased before Wednesday's drawing. That increases the chances — but doesn't guarantee — that someone will win the jackpot.
Related Stories:
Six states don't sell Powerball tickets, but that doesn't stop players
Try not to cringe while watching this restaurant celebrate a Powerball ‘win'
Powerball prize invites myths, misconceptions about lottery
Want an edge? 'Lucky' San Diego lottery retailers
Powerball nightmares: 5 ways an office pool can go wrong
Scripps Only Content 2015