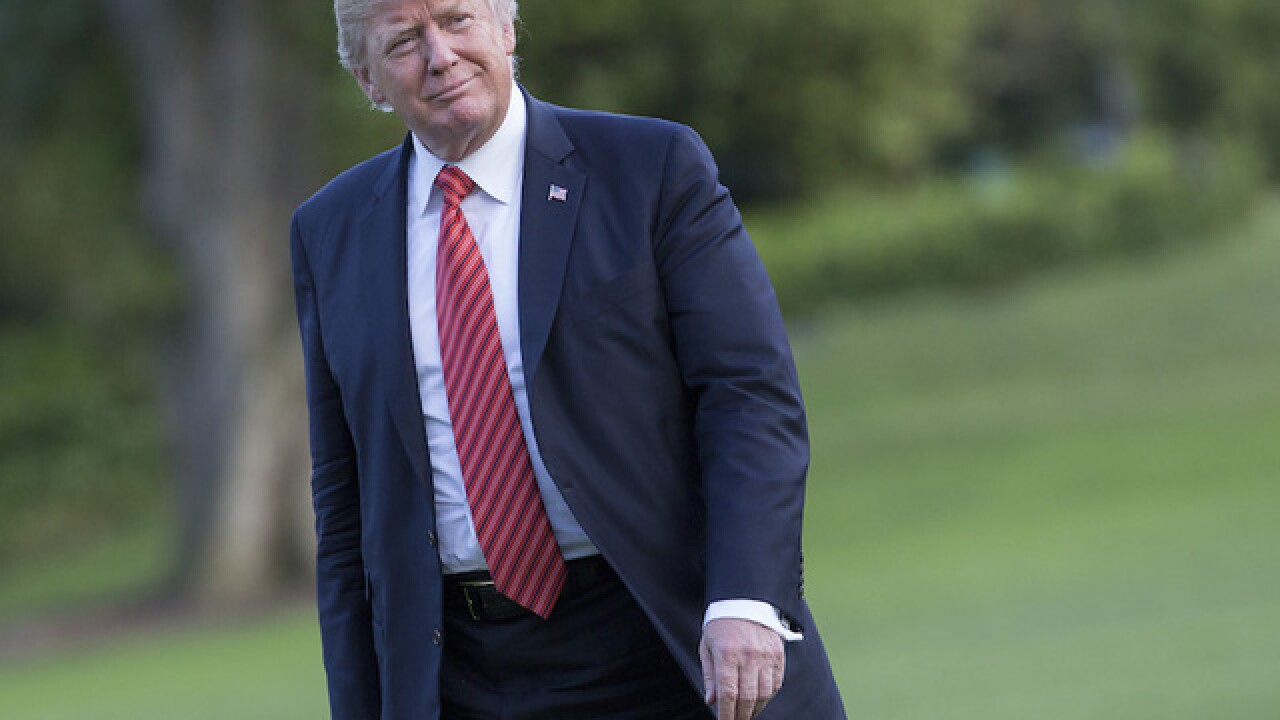 Image copyright 2017 Getty Images. All rights reserved. This material may not be published, broadcast, rewritten, or redistributed.
Pool

"I am pleased to inform you that I have just granted a full Pardon to 85 year old American patriot Sheriff Joe Arpaio. He kept Arizona safe!" Trump tweeted late Friday.

I am pleased to inform you that I have just granted a full Pardon to 85 year old American patriot Sheriff Joe Arpaio. He kept Arizona safe!

Arpaio quickly responded to the news - also on Twitter - to thank the president.

"Thank you [Trump] for seeing my conviction for what it is: a political witch hunt by holdovers in the Obama justice department!" Arpaio wrote.

Trump's decision has garnered backlash from civil rights groups, who accuse Arpaio of violating the Constitution in his crackdown on illegal immigration.

Thank you @realdonaldtrump for seeing my conviction for what it is: a political witch hunt by holdovers in the Obama justice department!

I am humbled and incredibly grateful to President Trump. I look fwd to putting this chapter behind me and helping to #MAGA

Arpaio, a vocal supporter of Trump during his 2016 campaign, was convicted of criminal contempt regarding his hard-line tactics on undocumented immigrants. He was set to be sentenced in October, before the pardon was issued.

The once-Category 4 storm was downgraded to a Category 1 storm, but still posing a threat to all those in its path with winds up to 90 miles per hour.

Trump's declaration will allow Texas to take advantage of federal dollars in response to the damage left behind by the storm.

The president is monitoring the situation from Camp David Saturday.

At the request of the Governor of Texas, I have signed the Disaster Proclamation, which unleashes the full force of government help!

Closely monitoring #HurricaneHarvey from Camp David. We are leaving nothing to chance. City, State and Federal Govs. working great together!

Just arrived at Camp David, where I am monitoring the path and doings of Hurricane Harvey (as it strengthens to a Class 3). 125 MPH winds!

"Closely monitoring #HurricaneHarvey from Camp David. We are leaving nothing to chance. City, state, and federal govs. working great together!" Trump tweeted.

The assurance came a day after President Trump criticized Congress on Twitter for not accomplishing the task already.

I requested that Mitch M & Paul R tie the Debt Ceiling legislation into the popular V.A. Bill (which just passed) for easy approval. They...

...didn't do it so now we have a big deal with Dems holding them up (as usual) on Debt Ceiling approval. Could have been so easy-now a mess!

"The government intends to pay its debts and the debt ceiling will be raised," Mnuchin said, according to CNN. If the government were to default on its legal obligations, markets and the economy could suffer.

The former Fox News correspondent left the White House, but why is unclear. Initial reports indicated that he resigned, while a later report from the White House said he did not resign, but was no longer with the administration, according to CNN.

Bannon: We will never turn on Trump

-- Former White House strategist Steve Bannon vowed in an interview he would not turn on his former boss.

"We will never turn on him," Bannon said in an interview with The Economist published Friday. "But we are never going to let him take a decision that hurts him."

Bannon rejoined the far-right website, Breitbart, the same day after he was forced out of his role in the White House.

"I am an ideologue, that's why I am out," Bannon said in The Economist. "I can rally the base, have his back. The harder he pushes, the more we will be there for him."