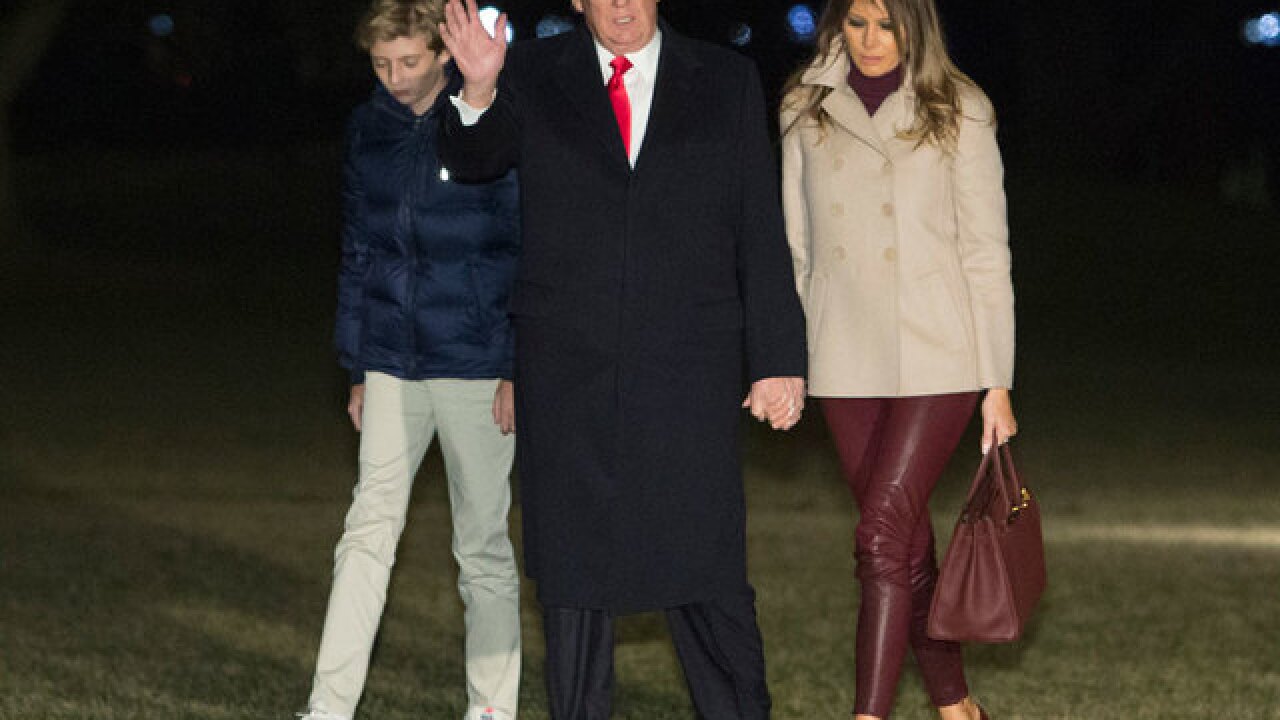 Back from holiday break, Trump goes on Twitter tirade
-- President Trump returned to the White House following his holiday break and immediately jumped on Twitter to comment on several topics, including frequent targets Hillary Clinton and North Korea.

First, the president spoke on the ongoing situation in Iran:

The people of Iran are finally acting against the brutal and corrupt Iranian regime. All of the money that President Obama so foolishly gave them went into terrorism and into their “pockets.” The people have little food, big inflation and no human rights. The U.S. is watching!

He followed that tweet with one urging the Justice Department to investigate a former Clinton aide and Comey, the former FBI director.

Over the weekend, the State Department posted several emails from Huma Abedin that were first found on a laptop belonging to her now-estranged husband Anthony Weiner. Some of the emails were heavily redacted and reportedly contained classified information.

Trump, likely watching "Fox and Friends" at the time, then tweeted: "Thank you to Brandon Judd of the National Border Patrol Council for your kind words on how well we are doing at the Border. We will be bringing in more & more of your great folks and will build the desperately needed WALL!"

On the tax bill that he signed before his holiday break, Trump said:

Companies are giving big bonuses to their workers because of the Tax Cut Bill. Really great!

The president then commented on North Korea, tweeting:

Sanctions and “other” pressures are beginning to have a big impact on North Korea. Soldiers are dangerously fleeing to South Korea. Rocket man now wants to talk to South Korea for first time. Perhaps that is good news, perhaps not - we will see!

Trump followed with: "Since taking office I have been very strict on Commercial Aviation. Good news - it was just reported that there were Zero deaths in 2017, the best and safest year on record!"

The president appeared to be referencing a report that examined 2017 aircraft crashes.

Trump then tweeted about his frequent media target, The New York Times:

The Failing New York Times has a new publisher, A.G. Sulzberger. Congratulations! Here is a last chance for the Times to fulfill the vision of its Founder, Adolph Ochs, “to give the news impartially, without fear or FAVOR, regardless of party, sect, or interests involved.” Get...

....impartial journalists of a much higher standard, lose all of your phony and non-existent “sources,” and treat the President of the United States FAIRLY, so that the next time I (and the people) win, you won’t have to write an apology to your readers for a job poorly done! GL

The president turned his attention to DACA and the Democrats' role in the program:

Democrats are doing nothing for DACA - just interested in politics. DACA activists and Hispanics will go hard against Dems, will start “falling in love” with Republicans and their President! We are about RESULTS.

Congress faces numerous challenges to start 2018
-- Congressional Republicans return to work this week thrilled they passed a major tax reform bill before Christmas but uncertain and divided about what they will do in 2018, a critical election year.

Entering their second year of unified control of Washington, GOP lawmakers have more questions than answers about what they can accomplish, with divergent ideas over the policy agenda and political path to the midterms. At the heart of it all is a significant rift between the top leaders in the House and Senate about whether to tackle entitlement reform, a longstanding GOP priority.

On key issues like health care, immigration and reining in debt from safety net programs, congressional Republicans are split, just when a more unified message might help convince voters to keep them in power.