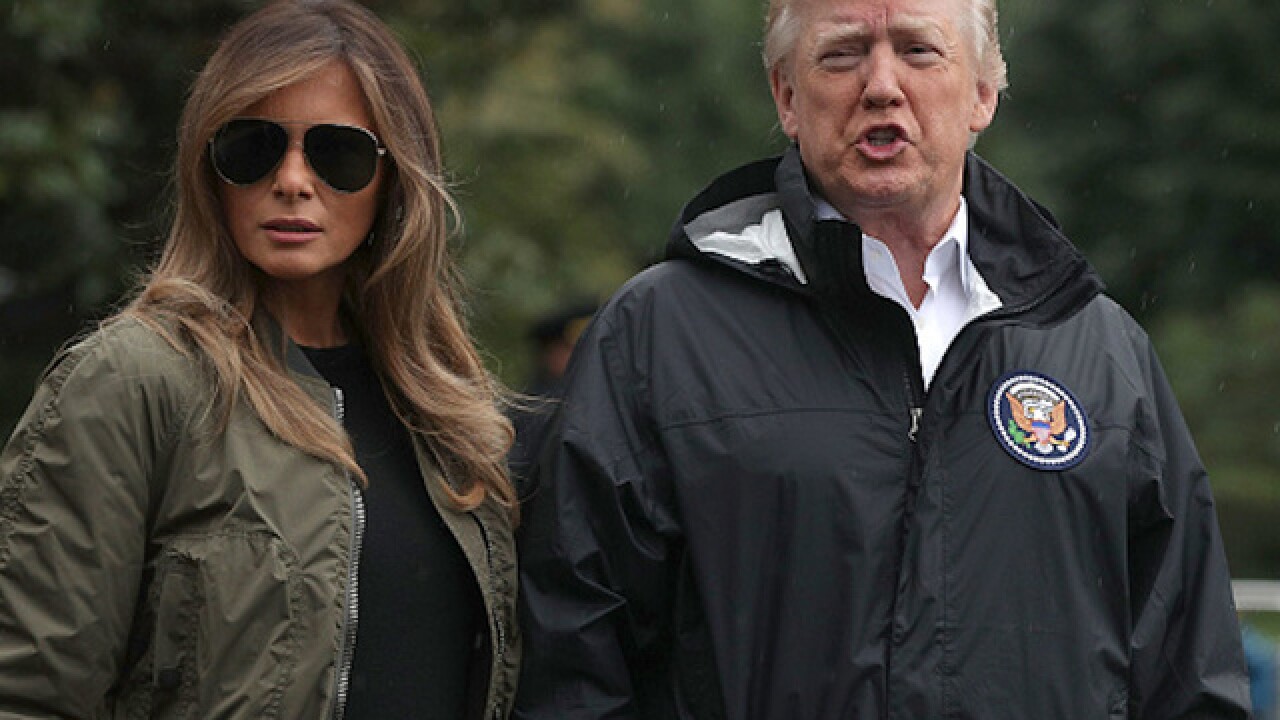 Image copyright 2017 Getty Images. All rights reserved. This material may not be published, broadcast, rewritten, or redistributed.
Alex Wong
<p>WASHINGTON, DC - AUGUST 29: U.S. President Donald Trump speaks to members of the media briefly as first lady Melania Trump looks on prior to their Marine One departure from the White House August 29, 2017 in Washington, DC. President Trump was traveling to Texas to observe the Hurricane Harvey relief efforts. (Photo by Alex Wong/Getty Images)</p>

The two boarded Air Force One early Saturday to head back to the region, having visited the region on Tuesday to meet with officials, according to CNN.

Departing for Texas and Louisiana with @FLOTUS Melania right now @JBA_NAFW . We will see you soon. America is with you! pic.twitter.com/z3bHVdJVPr

"He'll have the chance to meet extensively with quite a few storm survivors, as well as talk with some of the volunteers that are helping administer a lot of the support that these individuals have needed over the last week," White House press secretary Sarah Huckabee Sanders said. "And then from there, he'll go to Lake Charles, Louisiana, where he'll do a stop there as well, meeting with a lot of the volunteers and other storm survivors."

Ryan: Hold off on ripping up 'DACA'

-- Speaker of the House Paul Ryan has requested that President Trump hold off on doing away with Deferred Action for Childhood Arrivals, or "DACA," legislation.

When asked during a radio interview in Wisconsin about the president's expected decision, Ryan said Ryan said Congress was working on a fix to preserve the program, CNN reports.

"I actually don't think [Trump] should do that," Ryan said. "I believe that this is something that Congress has to fix."

-- The Trump Administration has requested $7.85 billion as part of an initial request for funds in response to Hurricane Harvey, according to a letter sent to House Speaker Paul Ryan. A request for additional money is expected by the end of this month as well.

The bulk of money will go to FEMA, while the remainder of the request, about $450 million, will go to the Small Business Administration, to help with disaster recovery loans to homes and businesses, according to CNN.

A vote on the request is scheduled for late next week.

-- Black smoke was seen billowing from the chimney of Russia's San Francisco consulate, ordered closed earlier this week in response to Russia's decision to downsize the America's diplomatic presence in their country.

Of the smoke, Russian Foreign Ministry spokeswoman Maria Zakharova wrote on Facebook that "emergency conservation of the building" was occurring.

"Measures are being taken to preserve the building," Zakharova wrote. "Therefore the windows may be closed, the curtains may be lowered, the light may be turned off, the doors may be locked, garbage may be disposed of, heating devices may be switched off, life support systems switched on, and much more."

The sight alarmed many in San Francisco, though local fire officials said on Twitter the consulate had a fire alarm and not an actual fire. Others, including California Rep. Jackie Speier, saw a more sinister act happening.

If there ever was doubt that espionage was going on in the SF consulate, black smoke clears the air on the issue. https://t.co/r2aAytvasd

"If there ever was doubt that espionage was going on in the SF consulate, black smoke clears the air on the issue," Speier wrote.