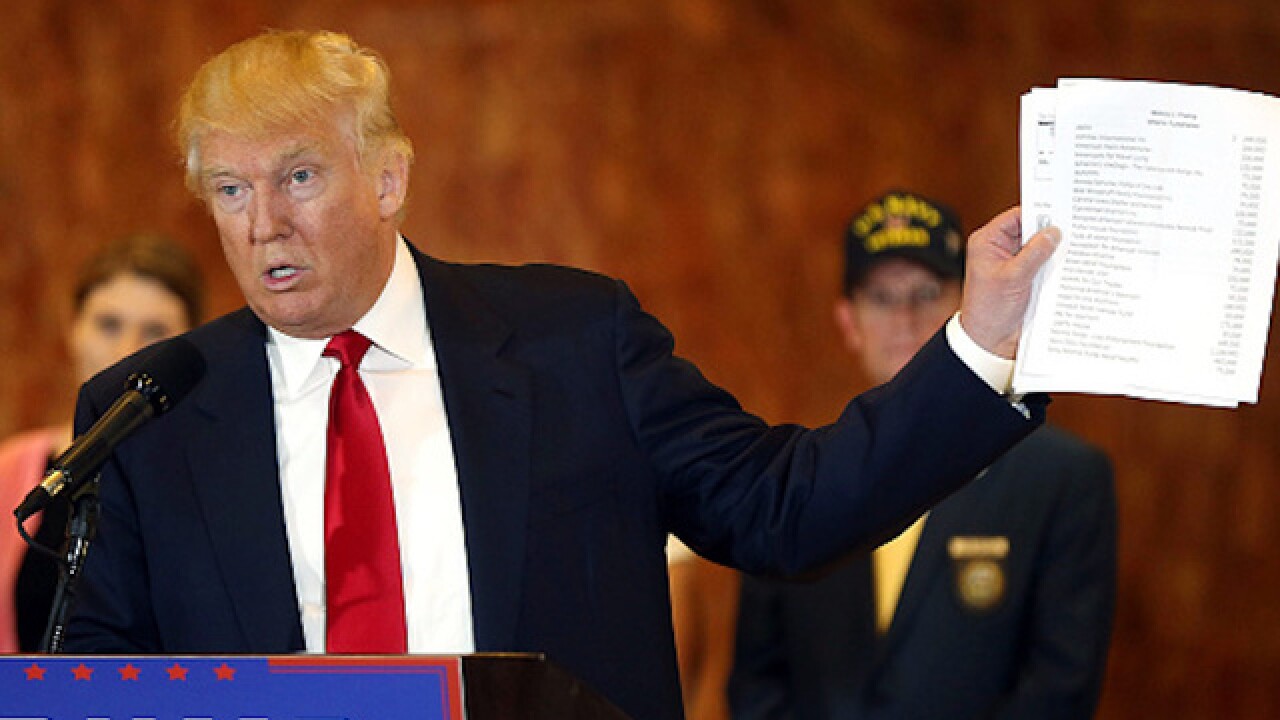 Copyright 2017 Scripps Media, Inc. All rights reserved. This material may not be published, broadcast, rewritten, or redistributed.
Spencer Platt
<p>NEW YORK, NY - MAY 31: Republican presidential candidate Donald Trump holds a sheet of paper with his donations listed at a news conference at Trump Tower where he addressed issues about the money he pledged to donate to veterans groups following a skipped a debate in January before the Iowa caucuses on May 31, 2016 in New York City. Trump had previously said he had raised $6 million at the nationally broadcast fund-raiser he attended instead of the debate and that he would donate it all to veterans groups. (Photo by Spencer Platt/Getty Images)</p>

Trump expresses desire to work with Democrats on infrastructure

-- President Donald Trump tweeted Friday the desire to work with Democratic lawmakers on infrastructure, after Republicans passed a major tax overhaul with no support from across the aisle.

"At some point, and for the good of the country, I predict we will start working with the Democrats in a Bipartisan fashion. Infrastructure would be a perfect place to start. After having foolishly spent $7 trillion in the Middle East, it is time to start rebuilding our country!" Trump tweeted.

At some point, and for the good of the country, I predict we will start working with the Democrats in a Bipartisan fashion. Infrastructure would be a perfect place to start. After having foolishly spent $7 trillion in the Middle East, it is time to start rebuilding our country!

The recently passed GOP-backed tax bill was passed this week with virtually no support from Democrats.

Pelosi said Democrats were, "deeply concerned by the Majority's efforts to curtail the House Intelligence Committee investigation and its overall failure to address Russia's meddling in the 2016 election," according to CNN .

"Nothing less than America's democracy and national security are at stake, and therefore we must fully investigate Russia's assault on our election systems to prevent future foreign attacks," the California Democrat wrote. "We expect that you will take urgent action to ensure this investigation can continue, and justice can be pursued, unhindered."

Dearborn will reportedly pursue work in the private sector, according to CNN . He is credited with overseeing political operation, public outreach, and legislative affairs in the White House.

Jones had said he thought it was time to "move on" after being asked if the president should resign in the light of allegations, CNN reported .

"I go back to the fact that those allegations were made, and he was elected President of the United States, and I think the American people spoke on that," Jones said. "At this time, there's other things out there, but I think at this point we need to move on and try to work with some real issues facing this country and not getting at odds with the President any more than we have to."

Speaking Thursday on "Late Night with Set Meyer," Jones said he wasn't talking about those allegations.

"And especially after these allegations -- not only with the President, but with others across the country and Roy Moore, I think we've truly reached a tipping point. A kind of a crossroads in this country, where women who have been abused and felt abused can now stand up, speak out. That is what I have been for all along," Jones said.