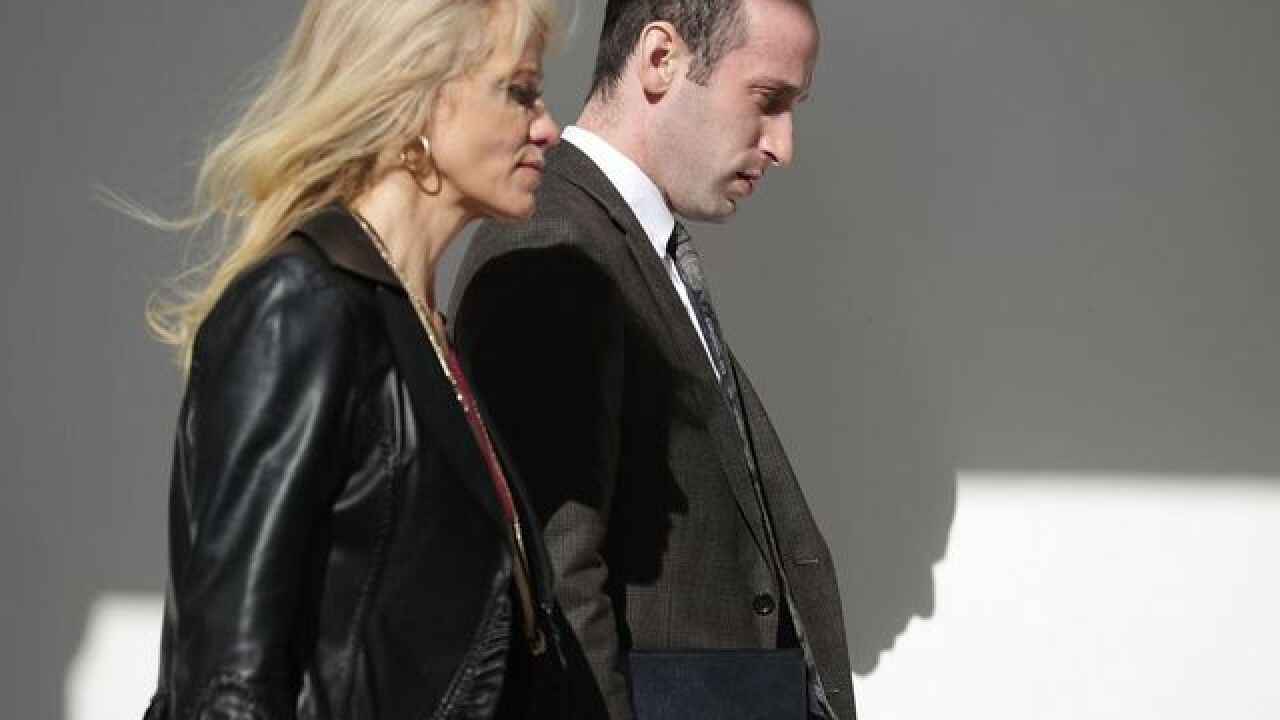 During the interview on CNN’s State of the Union, Stephen Miller said, "It's tragic and unfortunate that Steve would make these grotesque comments so out of touch with reality and obviously so vindictive.”

In sticking with the President’s message in a tweet Saturday, Miller painted Trump as a “political genius.”

The interview came one day after the President used his preferred medium, Twitter, to label himself a political genius saying, “…throughout my life, my two greatest assets have been mental stability and being, like, really smart.”

Now that Russian collusion, after one year of intense study, has proven to be a total hoax on the American public, the Democrats and their lapdogs, the Fake News Mainstream Media, are taking out the old Ronald Reagan playbook and screaming mental stability and intelligence.....

....Actually, throughout my life, my two greatest assets have been mental stability and being, like, really smart. Crooked Hillary Clinton also played these cards very hard and, as everyone knows, went down in flames. I went from VERY successful businessman, to top T.V. Star.....

....to President of the United States (on my first try). I think that would qualify as not smart, but genius....and a very stable genius at that!

(ABC) -- The FBI and Justice Department have reenergized an investigation into the Clinton Foundation that started under the Obama administration, two U.S. officials confirmed to ABC News Friday.

The case -- run out of the FBI’s field office in Little Rock, Arkansas, where the foundation has offices in the William J. Clinton Presidential Center -- was never officially closed, though it has picked up pace in the past several months, according to one U.S. official.

The FBI office in Arkansas declined to comment on the matter. In November, after months of Republican lawmakers clamoring for a special counsel to investigate alleged crimes related to the foundation and other matters, the DOJ sent a letter back to the chairman of the House Judiciary Committee, Bob Goodlatte of Virginia, disclosing that Attorney General Jeff Sessions “has directed senior federal prosecutors to evaluate” their requests.

Among other things, the DOJ letter said prosecutors will determine whether any new investigations should be opened and “whether any matters currently under investigation require further resources.”

The reference to “matters currently under investigation” is referring to the Clinton Foundation probe.

(CNN) -- CIA Director Mike Pompeo defended President Donald Trump's mental abilities in the wake of a book claiming Trump does not read or properly process information presented to him.

"Those statements are just absurd," Pompeo said on "Fox News Sunday." When he delivers information to Trump almost daily, the President engages with it and is an "avid consumer" of the CIA's work, Pompeo said.

In the past, Pompeo has described Trump as engaged with the intelligence in his briefings, and said part of Trump's preferred briefing method involves visual aids and "killer graphics."

On Sunday, Pompeo said that was true -- and that he loves "killer graphics" also.

(ABC) -- Enough with the polarizing political chatter on cable TV. That's the message from a nationwide health club chain that has pulled 24-hour cable news networks from TVs at its 128 locations because the "consistently negative or politically charged content" doesn't mesh with the company's "healthy way of life philosophy."

Life Time Fitness, which has 128 locations, said in a statement posted to its Twitter account, "The decision to remove the national cable network news stations resulted from significant member feedback received over time and our commitment to provide family oriented environments free of consistently negative or politically charged content."

The statement continues, "It always is our goal to meet the majority of members' expressed requests and we believe this change is consistent with the desires of overall membership as well as our healthy way of life philosophy."