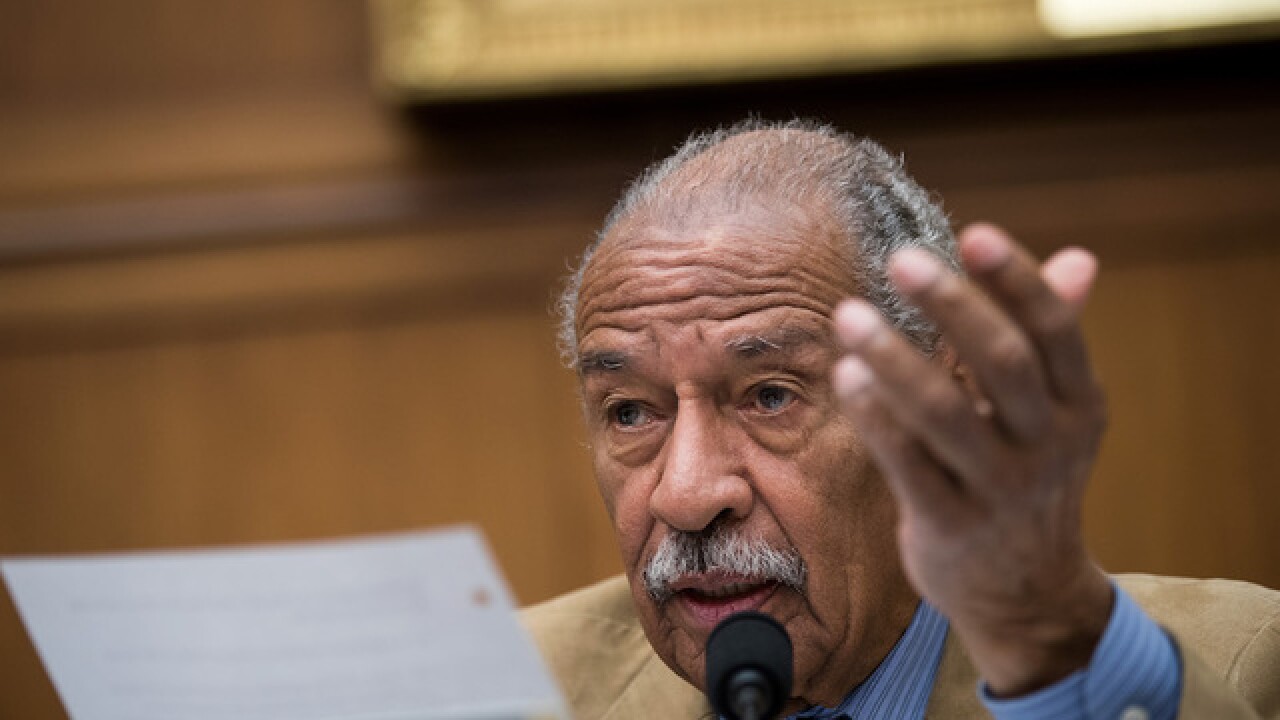 Copyright Getty Images
Drew Angerer
<p>WASHINGTON, DC - OCTOBER 26: Rep. John Conyers (D-MI) questions witnesses during a House Judiciary Committee hearing concerning the oversight of the U.S. refugee admissions program, on Capitol Hill, October 26, 2017 in Washington, DC. The Trump administration is expected to set the fiscal year 2018 refugee ceiling at 45,000, down from the previous ceiling at 50,000. It would be the lowest refugee ceiling since Congress passed the Refugee Act of 1980. (Photo by Drew Angerer/Getty Images)</p>

WASHINGTON D.C. -- Democratic Rep. John Conyers of Michigan stepped down as ranking member of the House Judiciary Committee amid sexual harassment allegations, according to CNN.

"After careful consideration and in light of the attention drawn by recent allegations made against me, I have notified the Democratic Leader of my request to step aside as Ranking Member of the House Judiciary Committee during the investigation of these matters," Conyers said in a statement Sunday afternoon.

Conyers has denied the allegations saying, "I very much look forward to vindicating myself and my family before the House Committee on Ethics."

(CNN) - Just as the political, entertainment and media worlds have been shaken by allegations of sexual misconduct, the Defense Department's watchdog has named "ensuring ethical conduct" one of the top 10 "management and performance" challenges for the Pentagon in 2018.

The Pentagon inspector general's report found that the number of allegations looked at by the IG against senior Department of Defense officials "has increased over the past several years." According to the report "there was a 13 percent increase in complaints alleging misconduct by senior officials from FY 2015 to FY 2017 (710 to 803).

The most common allegations involved personal misconduct including improper relationships, improper personnel actions, misuse of government resources, and travel violations." The IG also calculated that the number of substantiated allegations increased from 26 to 37% for investigations conducted by both the Department of Defense IG and inspectors general of the military services, defense agencies and military commands.

"In the category of personal misconduct, there has been a steady trend in substantiated allegations of improper relationships and sexual misconduct," the report said.

(CNN) -- Sen. Al Franken released a statement Thursday addressing several allegations of sexual harassment. Franken, a Democrat, said that he feels terrible that he "made some women feel badly."

"I've met tens of thousands of people and taken thousands of photographs, often in crowded and chaotic situations," the statement said. "I'm a warm person; I hug people. I've learned from recent stories that in some of those encounters, I crossed a line for some women -- and I know that any number is too many."

Franken's statement came just days after a woman said he grabbed her buttocks while taking a photo with her at the Minnesota State Fair in 2010.

A California radio news anchor, Leeann Tweeden, also accused Franken of forcibly kissing and groping her in 2006. A photo later came out showing Franken groping Tweeden on a USO tour.

President Donald Trump plans to meet with congressional leaders on Tuesday to try to hammer out the end-of-year agenda.

For Trump and the Republican-run Congress still reaching for their first major legislative victory, tax cuts would fit the bill. Democrats will carry leverage into year-end talks on agency budgets. Hanging over it all are congressional elections less than 12 months away.