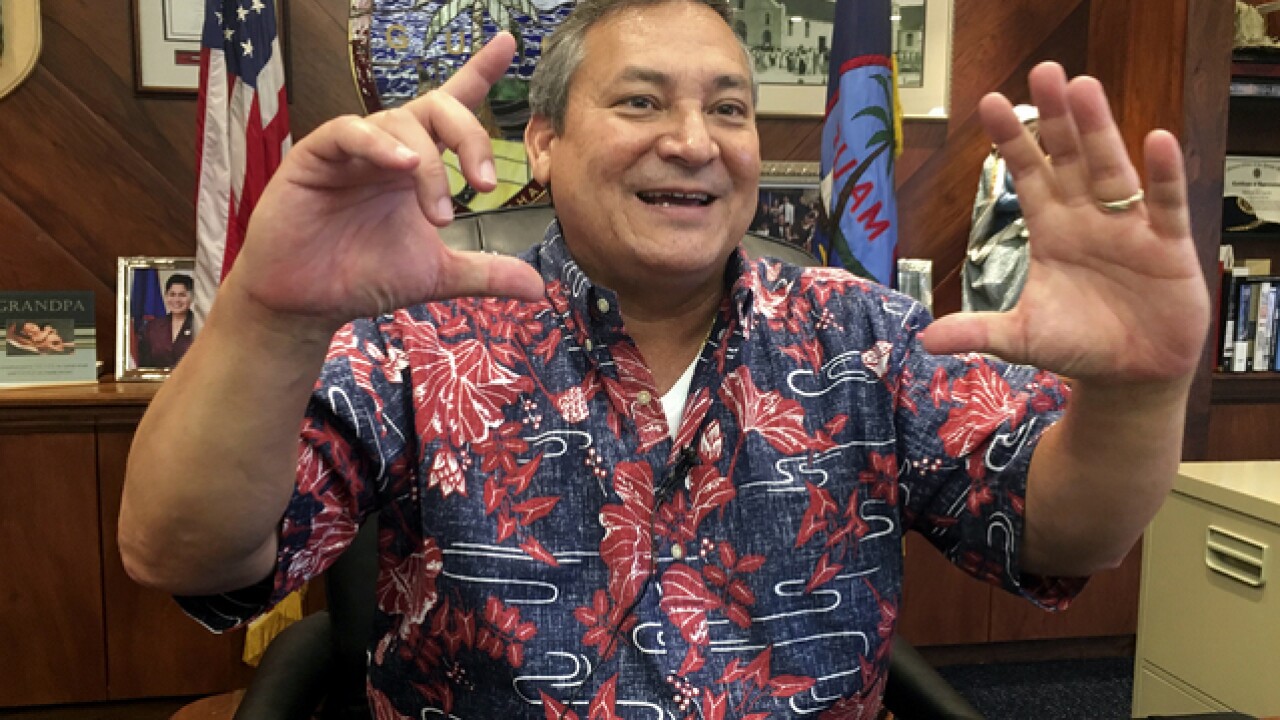 Copyright Associated Press
Tassanee Vejpongsa
<p>Guam Gov. Guam Eddie Baza Calvo speaks to the media in his office in Adelup, Guam, Friday, Aug. 11, 2017. The small U.S. territory of Guam has become a focal point after North Korea's army threatened to use ballistic missiles to create an "enveloping fire" around the island. The exclamation came after President Donald Trump warned Pyongyang of "fire and fury like the world has never seen." (AP Photo/Tassanee Vejpongsa)</p>

Guam Governor: "I have never felt more safe or confident" with President Trump

-- President Donald Trump called the leaders of China and Guam Friday to offer assurances over growing tensions between North Korea and the United States.

Guam's Governor Eddie Baza Calvo posted an excerpt of his call with the president on Facebook.

Gov. Calvo went on to express his faith in President Trump's handling of the North Korea threat.

"Mr. President as the Governor of Guam representing the people of Guam and as an American citizen, I have never felt more safe or more confident with you at the helm," Gov. Calvo said during the call. "With all the criticism going over there, from a guy that's being targeted we need a president like you."

Trump also informed Jinping of intentions to announce an investigation into Chinese trade practices this week.

Top DNC leader: GOP is a party of "racism"

-- Rep. Keith Ellison, the Democratic National Committee's deputy chairman, lashed out across the aisle, calling the Republican Party "the party of racism" at a conference Friday.

Ellison was speaking as part of a panel at the Netroots Nation conference, according to CNN.

"You hear Republicans say, 'We're the party of Lincoln.' He wouldn't recognize these people," Ellison, a congressman from Minnesota, said. "The fact is that the Republican Party today is the party of racism. Now I'm not saying every Republican is a racist, but I'm saying their party does hold that up.

"We will be scrupulously neutral," Ellison said. "If you hear the Democratic Party is helping out some incumbent or not playing straight and fair, then I would like to know about it."

How involved is Congress with North Korea? Not much, some say...

-- Democratic congressional leaders say the engagement from White House to Congress over North Korea tensions has been minimal - and that's concerning.

"We are not receiving updates or briefings at all. The legislative branch of the US government is hearing about these developments on Twitter at the same time as Kim Jong Un," Ben Marter, a spokesman for the Senate's No. 2 Democrat, Dick Durbin of Illinois, told CNN.

An aide to House Speaker Paul Ryan told CNN the "Gang of Eight" is "briefed and updated regularly from all relevant departments and agencies as well as the White House."